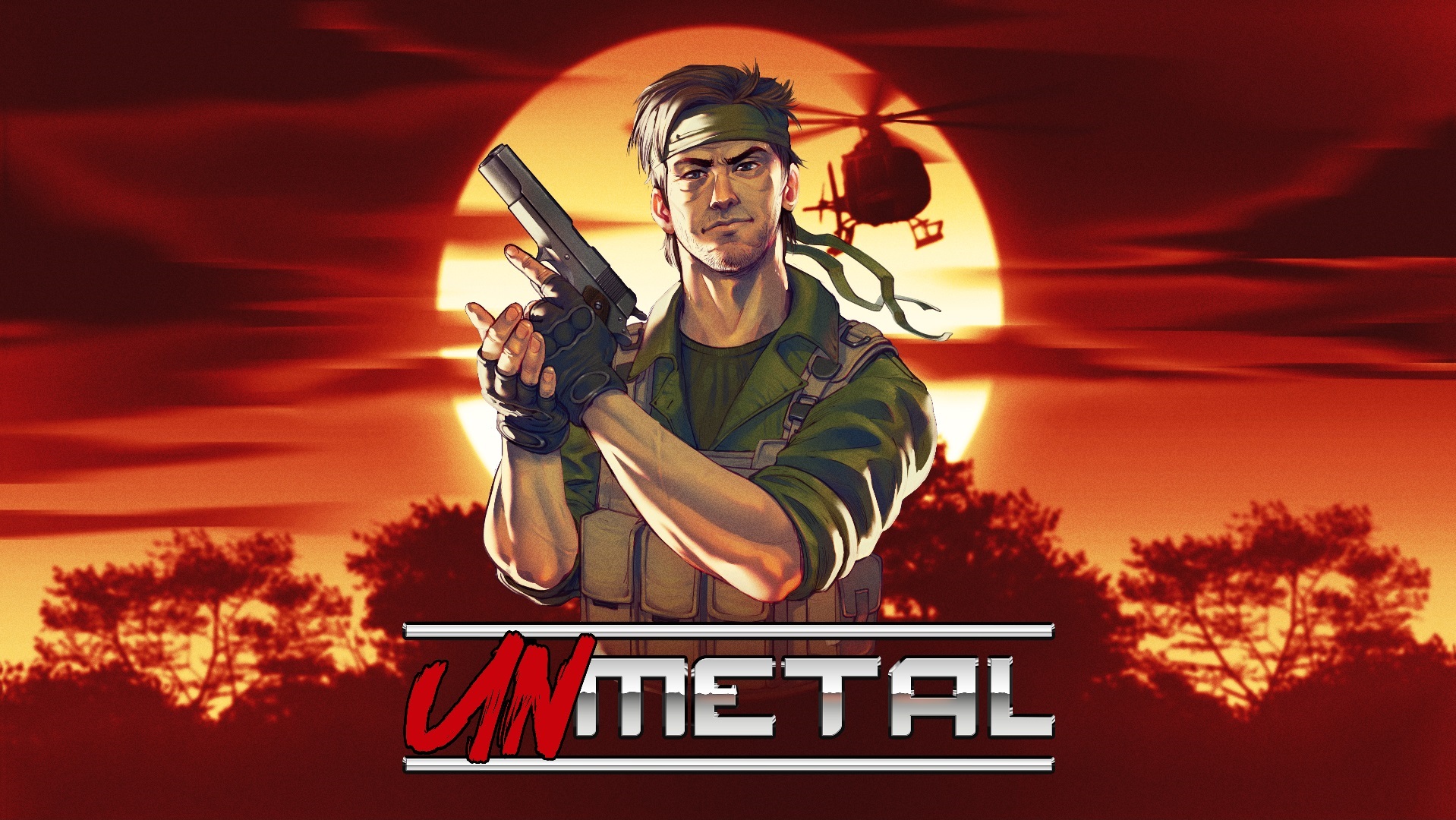 If you come for the King, you best not miss - can UnMetal land? The Finger Guns review.

If you come for the King, you best not miss – can UnMetal land? The Finger Guns review…

Parody is a tricky thing to get right. For every parody that is held in high regard – like Spaceballs, for example – there’s a dozen that miss the mark by a fairly wide margin. Good parody in video games is somehow even rarer, which makes UnMetal – developed by @unepic_fran and published by Versus Evil – a very interesting proposition.

After all, it would be very easy to parody a game franchise for which there isn’t a huge amount of fandom, knowing that you’ve chosen a relatively soft target with little risk of blowback. However, it’s another thing entirely to go after a franchise with one of the most rabid fanbases in games history. And that’s exactly what @unepic_fran has done here by making a pastiche to the game that put Hideo Kojima on the map as one of gaming’s true auteurs – 1987’s Metal Gear for the MSX2 system.

Those are some big sneaky military boots to fill, but UnMetal makes a really confident start right out of the gate. You play as Jesse Fox, a man who may or may not be a commando who is arrested for a crime he may or may not have committed, after his aircraft is shot out of the sky. The story of what follows that arrest is told through the gameplay itself, but also through a series of cutscenes depicting a debrief interview with an organisation who don’t appear to fully believe you – thus portraying Fox as a potentially unreliable narrator.

UnMetal – for those unfamiliar with Metal Gear – is a 2D not-quite-overhead stealth adventure game in which you move from area to area, seeking to either avoid enemies altogether or at least take them out as quickly and as silently as possible. Given that it’s a pastiche of a game from the mid-1980s, the core gameplay is actually pretty simple.

Movement is 8-way, rather than full analogue – playing this on Xbox as I have been, this is evident from the fact that you can control Fox with either the stick or the D-pad – and combat is conducted with just two buttons with one for melee and one for shooting (should you happen to have a projectile weapon to hand). The AI on the majority of enemies you’ll encounter is also pretty forgiving – patrolmen will stick to set routes, rats in the sewer sections will generally follow your path like the ghosts from Pac-Man, and dogs are easily distracted by chunks of meat. All-in-all, UnMetal is designed to be a very accessible game, and it largely succeeds in its goal.

However, the gameplay is only half the story here, and it’s in the presentation of its story that UnMetal truly shines. Graphically, it’s terrific, which plays a big role in imbuing the whole thing with a tremendous amount of character, especially in the game’s quieter moments. Fox and the enemies are well animated, environments are packed with detail, and the lighting is effectively used. Every so often, you’ll encounter a boss fight, and these are introduced with a splashy pre-fight screen that calls to mind the likes of Street Fighter II.

But beyond the accessible gameplay and the simple yet effective graphical style, the writing and the voice acting are the things that really push UnMetal over the top. I’ve been playing games for close to four decades now. One thing I can say with some certainty is that most games that set out to be funny generally fail. However, another thing I can say with some certainty is that this is not one of those cases. UnMetal might, in fact, be one of the funniest games I’ve ever played, perfectly mocking the po-faced nature of most games of this type, while also being genuinely humorous in its own right.

The interactions between Fox and one of the game’s main driving forces, Colonel Harris, are somehow both completely surreal and effortlessly natural. The use of the debrief conversations to drive aspects of the story in a ‘choose your own adventure’-type manner is excellent, often throwing you a curveball by interpreting your answer in a mischievous way – an early example sees you take on a tentacled creature in the sewers and, when you’re asked how many tentacles the creature has, picking a smaller number will actually see the creature given a much higher multiple. Even some of the throwaway back-and-forth between guards is unnecessarily well-written. Maybe this is down to the fact that this game is the creation of just one person – there’s a cohesion here that some ‘writing by committee’ titles can struggle to achieve.

The game does have a couple of minor issues – the Resident Evil-style inventory system can be a little obscure and finicky at times, especially when it comes to combining items, thus breaking the flow a little. And, while the combat is generally serviceable, the 8-way movement can make projectile combat somewhat awkward, particularly against bosses. However, these are issues that didn’t have a huge impact on my enjoyment, and I doubt they’ll be showstoppers for anyone else either. Overall, UnMetal is a very solid gameplay experience that is elevated to highly recommended status by everything else around it.

With solid gameplay, excellent style and some of the funniest writing I’ve ever encountered in a game, this pastiche to a classic is one of the most pleasant surprises I’ve experienced this year. It would be impressive enough as is, but when you then consider that this is largely the work of just one person, it becomes an almost unbelievable achievement. If you want an old-school adventure with some new-school panache, you’re not going to get much better in 2021 than UnMetal.