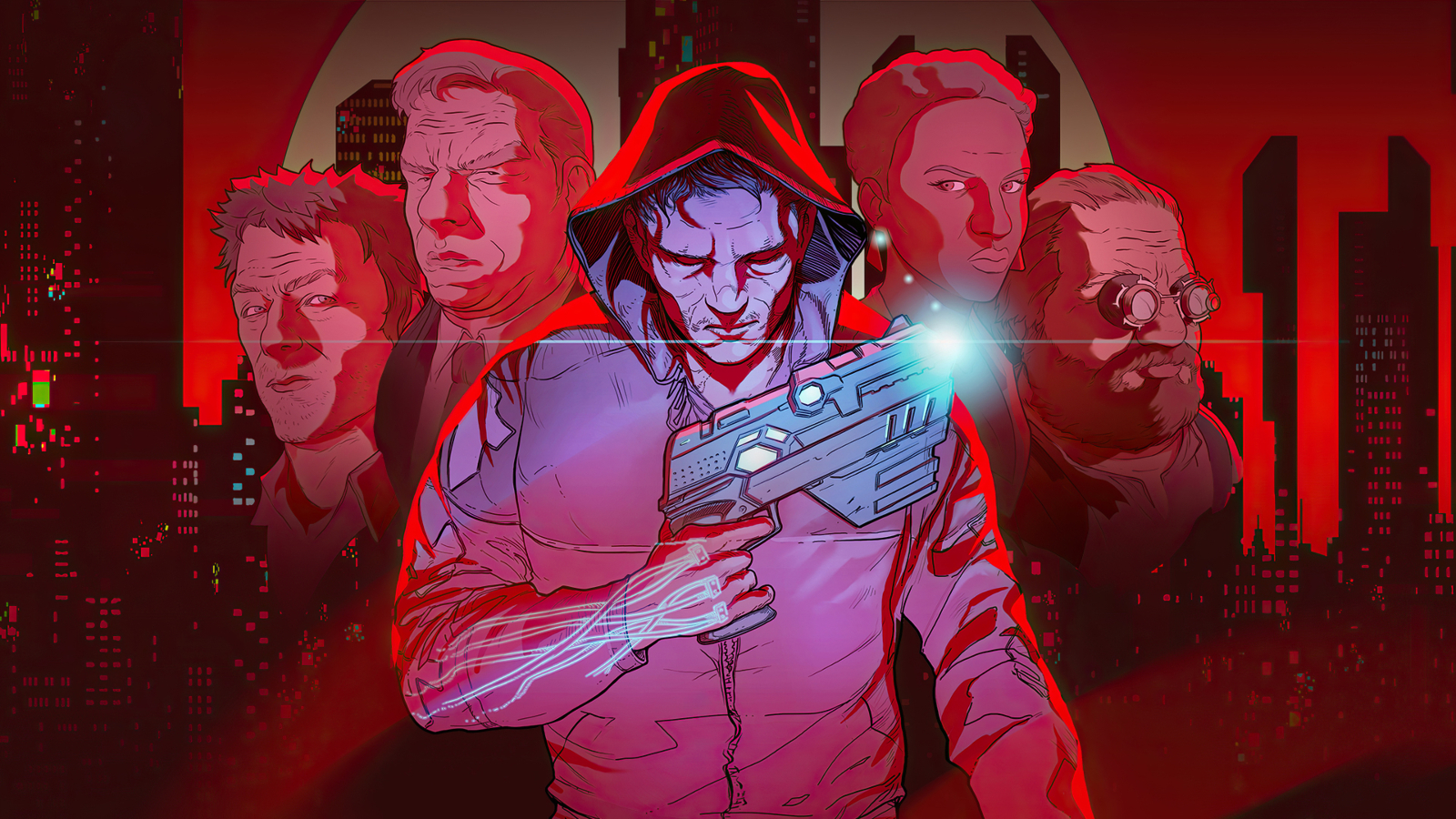 Can this unique blend of game styles show the execution to match its ambition? The Finger Guns review.

Can Foreclosed execute its unique blend of game styles to match its ambition? The Finger Guns review.

The gaming landscape is a very different one from what it was back in my day. Back in my day (the mythical decades known as the 80s and 90s), mainstream games that mixed genres were somewhat rare – platformers were platformers, beat-em-ups were beat-em-ups…you get the idea. Nowadays, almost every game is a blend of at least two genres, with even the likes of FIFA incorporating RPG mechanics in its career modes and deck-building mechanics in Ultimate Team.

Enter Foreclosed from Italian-based developers Antab Studio, a neon-soaked cyberpunk-noir thriller that is part-visual novel, part-isometric stealth game, part-RPG and part-third person shooter. Squeezing so many game mechanics into one container is a pretty ballsy move, but do Antab pull it off?

Let’s start with the story, which presents a genuinely interesting premise. You play as Evan Kapnos, a man living in a city where identities are collateral, much in the way that homes can be in the real world. You take control of Evan just as he receives a call informing him that if he doesn’t get to court by 4pm that day, his identity will be foreclosed. To ensure Evan doesn’t just try to flee, his brain augmentations have essentially been rewired to establish ‘mental barriers’ – if he attempts to go somewhere he shouldn’t, red barriers will appear to block his path. However, it soon becomes clear that there’s more at stake here, and Evan soon finds himself drawn into something much bigger than trying to get to court on time.

It’s a really clever conceit for a game – within the first five minutes, Foreclosed has done a terrific job of establishing both the story and the world that story takes place in. Speaking of which, when talking about the world, it’s impossible not to talk about the game’s equally impressive art style. Adopting a comic book/graphic novel aesthetic, Foreclosed is likely to look familiar to anyone who has played roguelike space shooter Void Bastards, cult classic FPS XIII or – going even further back – Sega’s ambitious take on the beat-em-up, Comix Zone.

The world you inhabit looks great. The cyberpunk motif ensures that the trademark neon colouring is ever-present, even in the city’s dingier areas, and when combined with graphic novel standards – such as the bold black outlining of objects in the world and the pencil-like crosshatch shading of the shadows – it all presents a really cohesive and invocative backdrop to the gameplay.

That comic book/graphic novel feel is only enhanced further through the clever use of some other genre staples. The use of panels to show different perspectives and angles during less intense gameplay sections is very well done, the use of traditional graphic novel-style fonts brings to mind the likes of Max Payne, and the graphic representation of combat sounds is brilliant.

Of course, this counts for little, if the game itself isn’t up to scratch, and it’s here where things get a little murkier for Foreclosed. Firstly, the positives. The blend of different gameplay styles works way more cohesively than one might expect, making the whole thing feel greater than the sum of its parts. The visual novel sections are fairly well acted and the branching dialogue options flow together pretty well, even though the dialogue itself can occasionally veer into clunkiness.

However, the isometric stealth secions are arguably the weakest parts of the game and my biggest bugbear. Some of them are completely fine, such as the sections where you’re sneaking around to avoid human enemies – these sections are generally more forgiving, as they present a small window of opportunity to escape line of sight, essentially giving you the chance to reset the situation. However, the sections where you have to avoid the automated police drones can be exceptionally frustrating, as that window of opportunity is removed, creating an instant-fail state that means you could be repeating those parts multiple times – I found this to be pretty offputting and honestly might not have bothered perservering, if I wasn’t enjoying the rest of it as much as I was.

The third-person shooter sections make up the bulk of the game and, by and large, are a lot of fun. These are also the sections that lean into the RPG elements most fully as, to assist you in these sections, you quickly pick up the ability to augment not just the gun you take possession of, but also your own brain. These are the most interesting augmentations, as these give you special abilities such as overheating the brains of unaware enemies (thereby silently rendering them unconscious, adding an additional stealth element) or straight-up launching them into the air and slamming them forcefully back down again.

When compared with these abilities, the gun augmentations are perhaps unsurprisingly less interesting in nature. While the shooting mechanics themselves are perfectly competent, it can feel a little too loose and imprecise at times, which becomes more of an issue in a room full of enemies. When combined with the somewhat underwhelming visual damage feedback, it just led to more frustrating deaths.

These admittedly small issues are largely forgiveable, but no less of a shame, because – when Foreclosed gets it right – it’s a genuinely unique and fun experience that is quite unlike anything I’ve played in recent years. It nails the cyberpunk aesthetic in a fun, interesting way, it tells an intriguing story and, barring those gameplay issues, would have been a contender for best game I’ve played in 2021.

Antab Studio’s ambition has to be applauded. Blending multiple game types with such a bold aesthetic style and an intriguing story premise – and getting so close to pulling it all off – is a remarkable achievement in its own right. As it is, it’s a qualified recommendation from me – the combat could be a little tighter and you should be prepared for some frustration with the instant-fail stealth sections. However, at the price point Foreclosed sits at, you’re getting a lot of bang for your buck, and that’s a difficult value proposition to ignore.