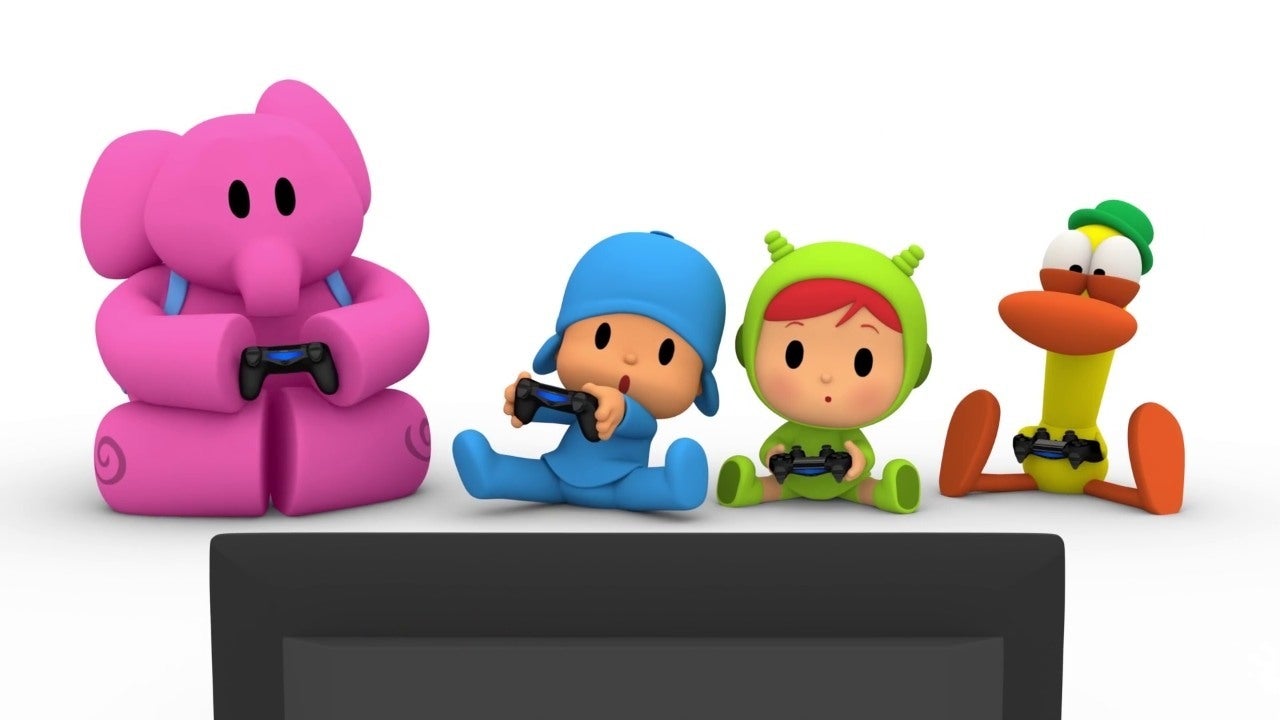 A game that caters to the youngest of gamers, Pocoyo Party brings the popular children's TV show to PlayStation 4. The Finger Guns Review.

A game that caters to the youngest of gamers, Pocoyo Party brings the popular children’s TV show to PlayStation 4. The Finger Guns Review.

Pocoyo Party is an educational video game featuring characters from the popular children’s TV show. The game begins as the titular Pocoyo is creating some party invites for his friends. Angry Alien (something of a recurring villain for the show) is flying his UFO nearby when he notices that there isn’t an invite for him among the pile of completed ones. Believing that he isn’t going to get one, the extra-terrestrial steals the invites to the Pocoyo Party and runs away. It’s up to Pocoyo, Nina, Pato and Elly to track down Angry Alien and retrieve the invites by participating in mini-games.

There are 6 mini-games in Pocoyo Party: a racing game, a shape recognition game, a dancing mini-game, a fishing game, a window washing game and a photography game. Each is playable in either solo-play or multiplayer; half of the game modes accommodate 4 player multiplayer and the rest can be played in 2 player. The mini-games each have their own difficulty progressions too, presented as levels which get progressively more challenging.

Pocoyo Party is a game designed primarily for 3 to 5 year olds and as such, it’s a game with very limited interactivity and basic inputs. It doesn’t presume that the player has competency with a Dualshock/Sense controller so uses the thumb sticks sparingly. Instead, the gyroscopes are used as a control option during play. The X button is also used regularly but the rest of the face buttons are unrequired. Each of the mini-games are easy enough for a 3 year old to pick up with no failure conditions to bar progress but have enough competitive spirit to entertain a 5 year old. Here’s a quick breakdown of each mini-game;

There’s a lot of variety to these mini-games which offer a well structured “my first video game” experience. They feature clear objectives, accessible controls and helpful introductions to the mechanics. Not all of them are fully thought through – the photography mini-game can be frustrating for younger players when certain characters won’t cross the centre of the screen for what feels like minuets – but for the most part, they’re fast fun for threenagers and their siblings.

Outside of the mini-games, Pocoyo Party also features a series of rewards for completing levels in the games. The first is a sticker album which shows stills from the adventure the gang goes on. The next is a series of jigsaw puzzles. Well, kind of. They’re not really a puzzle. They can all be solved by simply pressing X over and over again. My 5 year old figured this out but my 3 year old still thought she had some input in the solution. Lastly, there are a few exclusive episodes of the Pocoyo show which can be watched from within the game. These are all on par with what you’d find on TV.

It struck me about half an hour after my 2 youngest kids and I had started playing Pocoyo Party what a rarity this game is. Games aimed at kids are commonplace and so are titles tied to popular kids TV shows – Ben 10, Paw Patrol, Giganotosaurus, Sponge Bob, etc – but there’s a few unique aspects to Pocoyo Party that make it stand out.

The most prominent is how much of the spirit and style of the Pocoyo TV show is retained in this game. So often, when a TV show is adapted into a game, something is lost in the transition. The art style changes somewhat to accommodate the new perspectives that will be possible. The voice cast changes. Sometimes, the game doesn’t even carry the theme songs which are synonymous with the show. Pocoyo Party is a prime example of when all of this is done right. The game looks and sounds like a playable episode of the show. The premise is a lot like something you’d find in the cartoon. The narrator (Stephen Hughes, not Fry) for Pocoyo is present and correct, as are the sound effects for each of the characters. This is a tie-in game that feels like a real tie-in, not just a cash in on the IP.

The other aspect that makes Pocoyo Party feel like a rarity is that it’s specifically designed for younger players and doesn’t even attempt to cater to older one. My 3 and 5 year old kids had a lot of fun with this game. Achieving success came relatively easy for them and it suited their skill and education level. Many games get a PEGI rating of “3” or “suitable for all age groups” but so few games specifically cater to players that young.

Then there’s the educational nature of the game. Most of the mini-games have at least some pedagogic aspect to it. Whether its cleaning the windows to reveal animals below, pulling up letters and numbers in the fishing game or matching the blocks shapes in the building mini-game, they each have some pre-school application.

Asking my kids what they would change about Pocoyo Party was interesting. My 5 year old though the games could be quicker. For a child who’s accustomed to faster paced games with his older brothers, there was much more waiting around than he is accustomed too. He also said, in not as many words, that it would have been nice to choose your character for the 2 player only games (he didn’t like playing as Nina and would have preferred Pato). When I asked the same question of my 3 year old daughter, she just laughed and asked to play the game again.

Pocoyo Party is also a short experience for solo players. Many of the mini-games only last a few minuets each and have up to 8 different difficulty settings. There’s replayability here if the player wants to achieve a full score on every mini-game on every difficulty or they want to play in multiplayer. Otherwise, it’ll only take a few hours to see everything this game has to offer. My 5 year old had cleared every mini-game in the space of 2 evenings.

If you happen to have a pre-school fan of Pocoyo in your home, this is one party you might want to RSVP too. Pocoyo Party expertly encapsulates the thematic feeling of the show to feel like a natural extension of it. It doesn’t contain a massive amount of content and a few of the mini-games aren’t as well thought out as the others but what is here is accessible and designed specifically for the fun of players aged 3-5.