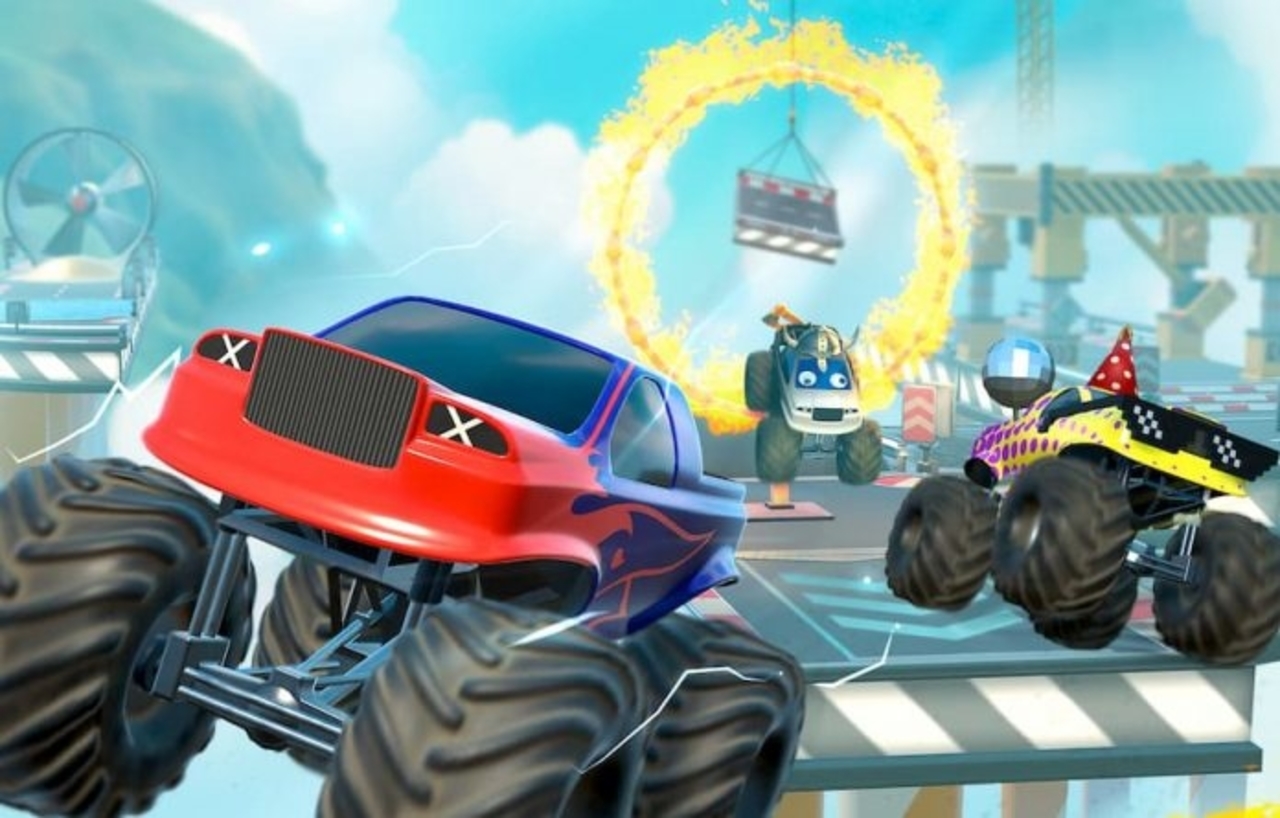 A wacky and quite clever concept, made great with its multiplayer mechanic. But can it hold up without it? The Finger Guns review.

Racing games, specifically the party-aimed ones, thrive on competitive multiplayer. Just take a look at Micro Machines, Mashed, Flatout or even Destruction Derby for prime examples. But what happens when that’s flipped to cooperative play instead? That’s what Can’t Drive This wants to find out: if you can work together instead of trying to kill each other.

It’s quite a simple premise, really. One of you drives, the other has to build the track ahead of them, acting as both co-driver and track editor at the same time. Sounds easy enough, yet it’s anything but. You have to think on the fly, and I guarantee some friendships and patience will be tested. Probably a few swearwords will be in the mix too.

The trouble, however, is whether Can’t Drive This can hold up without having friends to play with. Can a small amount of single player options carry this is no one else is available…? Let’s put our seatbelts and hard hats on as we find out.

You Said You Knew Where We Were Going!

The biggest draw to Can’t Drive This is its multiplayer options. As mentioned above, it’s less about taking each other out and more relying on one another. It will test your patience, no doubt about it. But at least this time, you won’t be descending into fisticuffs for destroying each other.

Well, you might, if you were that close to the end and your buddy doesn’t lay the track quick enough.

That’s right, cooperation and coordination is the aim of the game here. You need fast reactions and forward thinking, reflexes like a master Fortnite builder and some Trials-like driving reactions.

Where We’re Going, We Will Need Roads…

The core component is simple enough. One of you drives, the other builds. This is presented in split-screen in both local and online multiplayer. The former makes sense but the latter helps so that you can least attempt to plan ahead if you’re driving.

There are four modes of gameplay:

Of this modes, Yardage and Drones are the real draw. Sean and I played several games of both, each to varying levels of both hilarious frustration and “Damnit, one more go” attempts.

This is because the road pieces you get aren’t selectable, they’re randomised like Tetris blocks. So you might get some decent road laid, then the next three are a ramp, a speed boost and a swinging pendulum platform to mess you up. This is where had the most fun.

Trust Me, We Can’t Drive This

When you’ve got a friend to help you, Can’t Drive This can be an absolute laugh. I dabbled once or twice with online random players, and without communication it felt like a paler imitation of the experience. When Sean and I got together, though, many laughs were had.

Between rounds [in Game of Drones] or upon death, you can switch roles. Or, if you’ve got a good dynamic with one building and the other driving and want to keep that way, then fine. That breakneck panic of laying a piece of track before the other falls off or slows down is absolutely joyous. It’s as frenetic as competitive multiplayer, capturing that panic perfectly.

This is where the game shines, be it couch or online fun times with your friends. It’s a simple enough concept, but delivered with such a fun execution that makes it a delight to play. It’s just a shame that the same magic can’t be said for Lone Racer.

Flying Solo Is A No No

That bit I wrote above about playing with a friend is where the game shines. It can’t, however, be replicated by playing with yourself. It’s like playing chess by yourself: you’ll win, eventually, but where’s the satisfaction in having someone else to interact with?

It also doesn’t help that Capture the Egg is only online multiplayer. Not that I have three more friends (or PS5 controllers) to play local anyway, but it sucks for anyone that has. You have to rely on more of your friends having this game for a good time, or chance it with random players from anywhere else.

The crux of Can’t Drive This is in the multiplayer, which is a barrel of laughs and a fun time. Outside of that, it’s just a hollow mockery of the full experience. Like having a basketball court to yourself, you just want someone, anyone, to come and play with you.

Cynicism of the single player component aside, Can’t Drive This has a wealth of unlockable customisation options for your ride. Unfortunately, you can’t change the ride itself, but you can make it personalised.

Spinning propellers, paint jobs, tops hats and much more are available, but it’s not just your car you can pimp. You can even change the pattern of the tracks you lay. Oh yes, if you’re bored of the typical road pattern, you can switch it up for brickwork or a nice floral pattern instead. Why? Because you can, I guess.

But it is all unlockable in-game, thankfully. No microtransactions, no DLC or anything. It’s all old-fashioned, progressed-based unlockables. Which we all agree is a good thing.

Does that make up for the lack of depth in the game modes and solo replayability? Not really, but that’s apples and oranges. It’s fun to have a top hat and moustache as you curse your friend out for not having the premonition to know where you were going.

All in all, with its premise and funky customisation options, Can’t Drive This is an actual blast to play. Yet it comes with that massive, overhanging “…with friends” caveat.

Which is great, if they’re available. Comparing how daft your cars look and trying to successfully finish a course is great fun. It’s like Colin McRae Rally meets Fall Guys levels of stupidity. It’s just outside of that, there isn’t really else to offer. Especially if you’ve got no one to play with.

It would be unfair to call this “shallow” because it doesn’t claim to be a game with massive depths. It does one concept and it does it well. It’s just somewhat lacking if you don’t have the option to explore it fully for hours on end. But of course, if you’re looking for something to play when we’re allowed people over, or have gaming kids to entertain, then you can’t go wrong with this.

Not the deepest of racing games, but then it doesn’t claim to be. Can’t Drive This has one core concept, and it does it well. It’s just a bit lacking if you have no one else to experience it with.