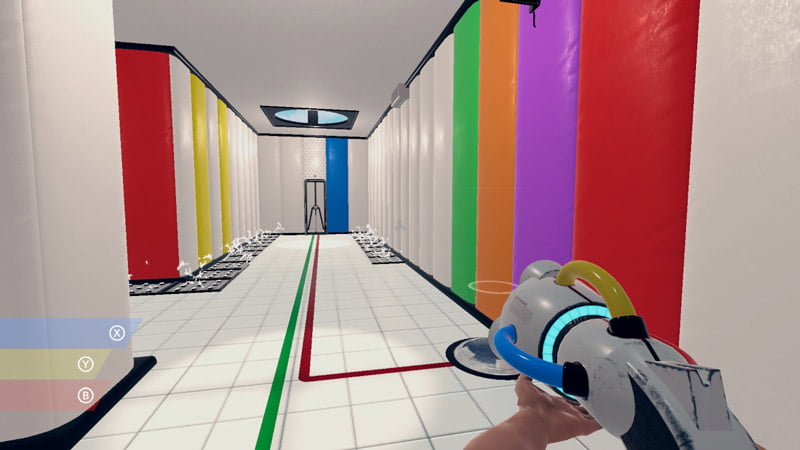 Chromagun wears its influences on its sleeve but fails to recreate the magic of its forebears. The FingerGuns Review;

Chromagun wears its influences on its sleeve but fails to recreate the magic of its forebears. The FingerGuns Review;

The influence behind first person puzzle-’em-up Chromagun is obvious. From the sarcastic, counter-intuitive narrator and “test chamber” structure to the trophy for finding a cake in the game “which isn’t a lie”, Chromagun attempts to emulate the feel of Portal. Aesthetically and thematically, this game just about succeeds in doing just that, but the puzzles are far more simplistic than that of its forebear.

In Chromagun you play as a volunteer who is testing out the new state-of-the-art military paintball gun from ChromaTech. The Chromagun is able to paint the entirety of any surface that has not been designed to withstand its painting power. The gun has the ability to spew out red, blue or yellow paint balls with which you must use to pass a series of test chambers. Throughout these test chambers are a series of floating droids that understand which colour they are painted. The droids will then gravitate towards any surface that is painted in the same colour they are. If there are more than one surface painted in that same colour, the droid will more equidistant between them. To clear the game, you must use the Chromagun to paint the environment to move the droids to activate switches and pass obstacles to reach the exit of each chamber. Simple.

At first, the puzzles can hardly be called puzzles. They’re as simple as painting a wall and a droid in the same colour to have the droid float on a switch.. Soon Chromagun is introducing the mix of the primary colours; red + yellow = orange, blue + yellow = green etc. Then there’s electrified flooring which can kill but can be deactivated by sacrificing a droid to it. Later there are walls which clean themselves of the colours which you spray on them and walls which bounce colour onto an adjacent wall.

While the game is almost constantly adding new puzzle aspects during its 4-5 hour length, the learning curve is incredibly gentle. Each of the games 8 chapters signifies an introduction of a new mechanic or theme but the new additions hardly feel exhausted by the time the next chapter begins. I say this as a moderate puzzle gamer; Chromagun felt too easy for the first 6 chapters with only a small amount of trial and error required to complete blatantly-obvious-to-solve puzzles.

It’s during chapters 7 and 8 when Chromagun finally asks you to think about what you’re doing with any real effort thanks to some enjoyable long form head scratchers. This is where the game stacks everything it has thrown at you – the colour schemes, the deadly flooring, the bouncing walls, the self cleaning walls, coloured floor tiles, a feeling for timing and awkwardly placed switches – into complex puzzles that require forethought and just a touch more trial and error than usual. It’s here where you finally get those “Ah! *THAT’S* how you do it” moments that are missing from the first 75% of the game because it’s too damn easy.

Your whole adventure is narrated by a ChromaTech employee who is dry, sarcastic and often attempts to direct you into danger; When you first find electrified floor tiles he says “Now, if you wouldn’t mind walking on those deadly floor tiles, that would be great”. It’s obvious an echo of the attitude of GLaDOS, only the writing isn’t anywhere near as good. The lines of dialogue are like if your Dad decided to write Portal fan fiction. An example? Get killed by one of the more aggressive worker droids and the narrator will say “If you’re looking for friendly worker droids… these aren’t the droids you’re looking for”. Cringe.

Visually, parts of Chromagun stand out as nice touches in a sea of mundane. The Chromagun itself looks the part and there’s a few levels set in the dark which nicely break up the blanket of white, clean, bold and boring sci-fi that covers the rest of the game. There’s some motion blur effect on the game too which is incredibly noticeable too.

Chromagun is a love letter to Portal. Unfortunately, it’s a poorly written one. The last 2 chapters of the game offer some decent problems to ponder but you have to walk through 6 chapters of prosaic, boring puzzles to get there. The tart, snide narrator isn’t a shade on its inspiration and is little more than an irritation well before the credits roll. If you’re looking for a laid back, relaxed puzzle game that won’t tax the grey matter in any meaningful way, give Chromagun a go. If you prefer a challenge, look elsewhere.

Chromagun is available now on iOS, PC, Xbox One and PS4 (review version)

Disclaimer: We purchased a copy of Chromagun in order to complete this review. For more information, please see our review policy.