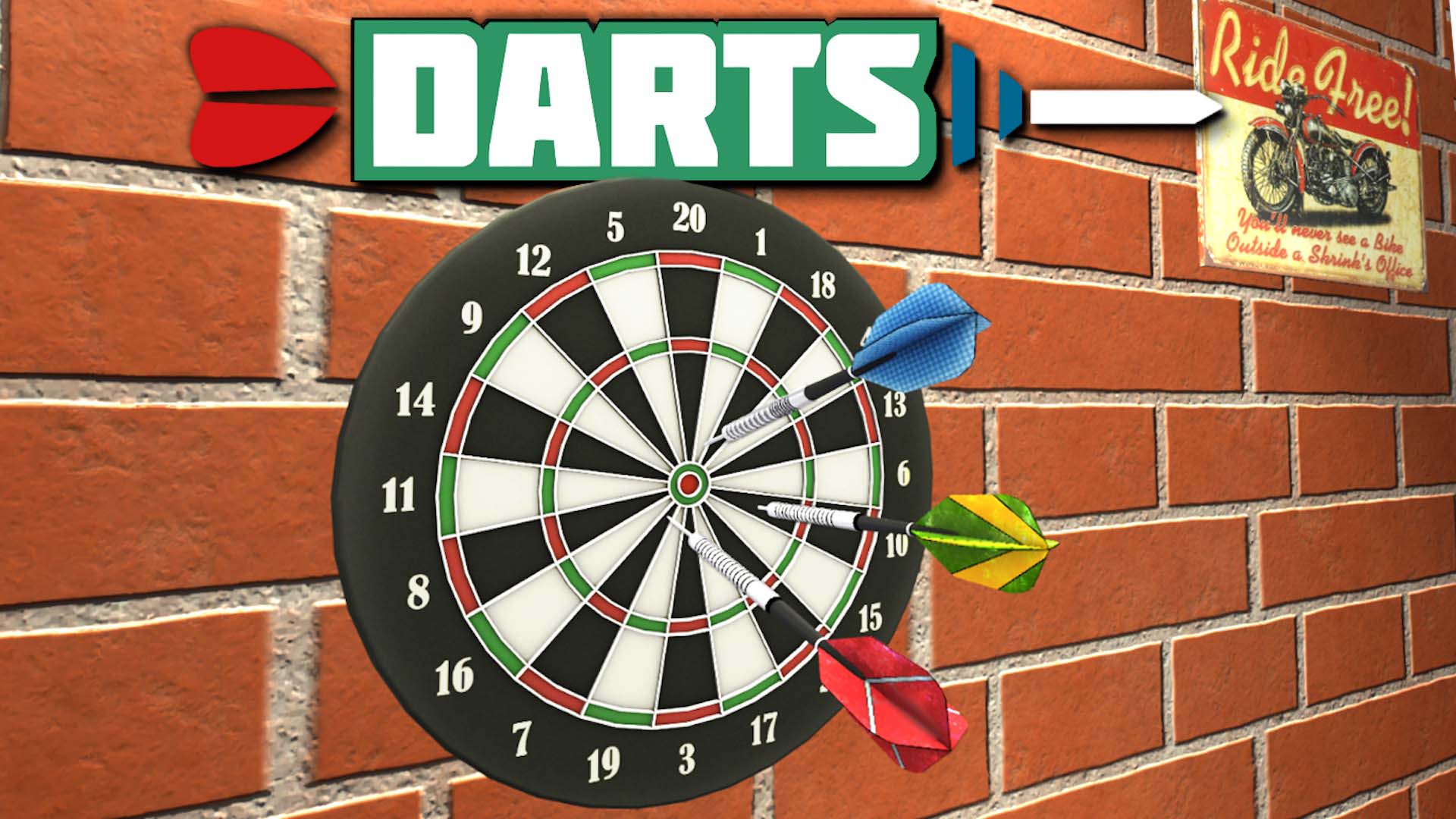 This shoddy, glib Darts game is an affront to the game it mimics. The Finger Guns Review.

This shoddy, glib Darts game is an affront to the game it mimics. The Finger Guns Review.

This is it. This is the last game from Sabec that I ever review. Having spent this past year buying and then reviewing their substandard releases, Darts will be the last. This game is the straw that breaks this particular camel’s back. The lack of care for the subject matter demonstrated here, devoid of even a glimmer of game design intelligence, is breath-taking. Needless to say, this will not be a positive review.

Darts has never been an easy sport to replicate in a video game. The complexity of darts – the power, the angle, the flight, the accuracy – is hard to translate for a video game in a way that’s satisfying. So much so that there hasn’t been a home console version of Darts for almost a decade, the last games being PDC World Championship Darts and Top Darts on the PS3. That’s not to say darts games haven’t been made. There are hundreds of mobile phone games for the sport, most of these are terrible. Instead, this sport has found itself become a popular mini-game in many other games, most recently Persona 5 Royale, Watch Dogs Legion and Final Fantasy VII Remake. As little diversions, these mini-games have worked well – but no one has taken on the task of creating a full game dedicated to Darts. That’s for good reason. It’s a tough genre to nail. The question has to be asked if Sabec thought that they could genuinely create a decent darts game and failed spectacularly or whether they saw a gap in the market and decided to pump out a substandard game to sell a few copies to fans of the popular pub game. I suspect it’s the latter.

Sabec’s Darts begins with its most pleasant moment. That camera pans around a virtual play room complete with pool table and, of course, a darts board when funky jazz plays. This leads to the game’s main menu which consists of 2 options; 1 player or 2 player. As you might expect, 1 player is against an AI opponent while 2 player is local, pass the controller play. There’s no difficulty options, no tutorial, no menu options for music or sound levels, no explanation of how to play (this game presumes you know how to play Darts – not that it’ll matter) or even what that controls are. It feels like a game jam game that has ran out of time and had this 2 option menu slapped on its front.

Then you start a match. The aim should be the first to reach 0, ending on a double, where both players start with a score of 501. Each player has 15 rounds of 3 darts in order to do so. Instead, the aim simply becomes ‘hit the board’. This is because Sabec’s Darts has the most baffling and unintuitive control scheme I’ve ever seen in a darts game. A dart spawns and each one is randomly angled in a different way. You then get to move this dart around the screen to try and align the angle so that it might hit where you want it too. There’s no guide or aide to show in which direction that dart might fly. Instead, you’ve got to guestimate the flight on the angle to the board. This isn’t helped by a mild sway on the dart.

Although, you might not want to bother. When you pull the Dualshock trigger button, the dart starts to tip up and down. I imagine this was Sabec’s attempt to replicate the throwing motion of the dart but here, it remains stationary and just bobs up and down. Coupled with the mild sway, this makes it nearly impossible to fire off the dart in an accurate way. This is compounded by the dart letting flight once you let go of the trigger which means it’s not immediate or an accurate way to throw. I’ve played this game for far longer than my patience with this system lasted and not a single dart landed where I wanted it too. Not a one.

“Wait Sean” I hear you cry, “If you can’t accurately throw a dart, how are you expected to finish a match on a double?”. I wouldn’t worry about that. Despite playing more than 20 games, I’ve only been in a position to finish a match once and that was a total fluke (attempting to aim for treble 20 and hitting treble 19 multiple times). I won the match but only because the AI was still 100+ behind me. The AI has never finished a match once and even the computer controlled opponent has trouble hitting the board in about a third of its throws.

A trend with Sabec games, Darts has absolutely no atmosphere. During play, there’s no music and limited sound effects. Hit a double or triple and you’re treated to a beep that’s about as annoying as the noise made when activating sticky keys on a windows PC. There is some customisation available with a range of colourful dart flights and changeable colour schemes for the board but it’s quite literally only surface deep.

The lack of any types of modes is glaringly obvious too. I guess if the game was playable in any type of state other than randomly throwing darts at a board and hoping they score, I’d have like to have seen killer darts, Halve it, Cricket, Fives or customisable starting scores for quicker games. Instead, it’s limited to an unplayable 501 version only.

It’s telling that the many darts mini-games that can be found in other bigger titles are far more enjoyable than Sabec’s Darts in every sense. At no point in this game did the control scheme make sense or feel fun. If Sabec had renamed this game “Drunken Darts Simulator” and it had not taken itself so seriously, this could have been a short lived laugh for some YouTubers to make a video of. Instead, it demonstrates a complete lack of respect for Darts as a sport and feels like a few darts assets thrown together in an attempt to call itself a game. This game misses the mark by miles.

The sport of Darts deserved better than this. Better described as a virtually unplayable mess with a darts façade rather than a darts game, I wouldn’t even recommend this title to my worst enemy.