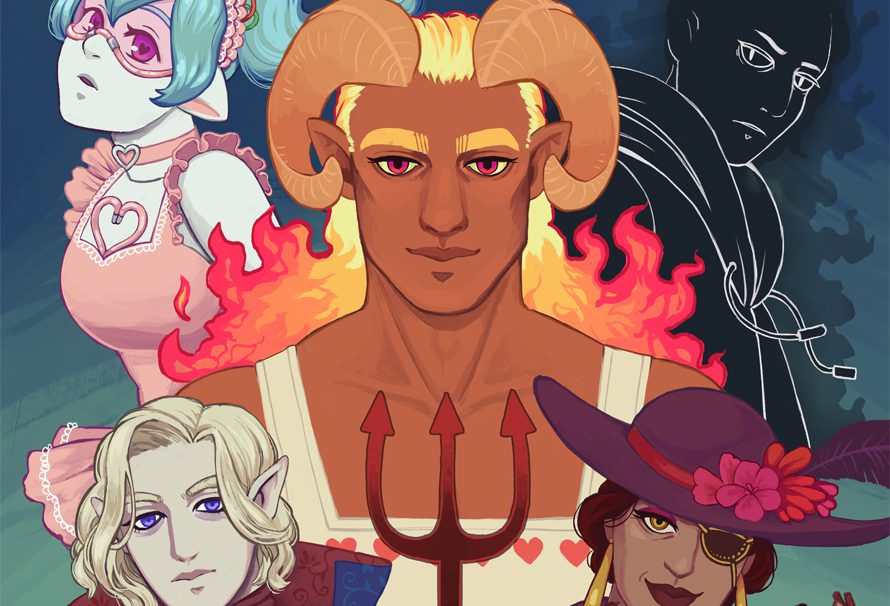 It promises Heaven, but does it put you through Hell? The Finger Guns review of Lovingly Evil on PC.

It promises Heaven, but does Lovingly Evil put you through Hell? The Finger Guns review.

Even accounting for the law of averages (seven billion people out there, so at least one of them must be a good match for you, right?), I imagine that dating is hard. Now, can you imagine how much more difficult it must be, if you’re evil? You know, like (REDACTED) or (NOPE) or (C’MON, DUDE, WE DON’T NEED TO BE SUED)? Well, you don’t have to guess any more, thanks to Lovingly Evil, a dating sim with a unique premise from developers Lizard Hazard Games.

That premise is that you, a newcomer to the evil scene, are attending your first VCON, a conference for like-minded evil entities to attend seminars – on such varied topics as mastering your evil laugh, dressing evilly and choosing your perfect evil soundtrack – and network.

And that’s the set-up for the game, which takes the form of a visual novel with a number of dialogue choices with which you can guide the conversation between yourself and any of the characters you’re allowed to interact with – five of whom serve as the game’s potential romantic interests.

You have Nova, a hyper-intelligent AI who is forever learning about the human condition, while avoiding the creepy advances of her creator. You have Felix von Gloomheart, an enigmatic vampire who also happens to be a florist (no, really). There’s Imperia Maissard, a magnetically confident VIP who knows what she wants and knows how to get it. There’s a ‘clone’ of you who seems suspiciously un-clone-like. And you even have the Big Bad himself, Satan, who likes to show up at evil conferences and…grill sausages for some reason (and, as far as I can tell, they’re not even metaphorical penises).

Graphically, the game doesn’t do anything spectacular – to be fair, it’s difficult to imagine how you could make a game set entirely within a business conference centre stand out (a comment on the mundanity of evil, perhaps?).

However, the style of the NPCs you’ll encounter along the way has been imbued with enough character to make them more memorable than other games in the genre. Each one of the five potential romancees (yes, I’ve just made up that word) has a distinctive look and distinct personality, which makes each conversation feel unique. There’s even some limited voice acting for each of the characters – think Paradise Killer, if you’ve played that recently. This, in turn, ensures that the somewhat repetitive nature of these types of games is mitigated to an extent.

Speaking of those conversations, given the dialogue is the game’s biggest selling point, it undoubtedly helps that Lovingly Evil’s biggest plus comes in the form of its writing, which is sharp and terrifically witty. Perhaps most importantly, it also feels surprisingly natural, given the subject matter of most of the dialogue, thus lending the whole thing an almost sitcom-esque charm.

In a further attempt to break things up and reduce repetition, Lovingly Evil even mixes it up a little by offering a number of small optional mini-games as a nice change of pace from the dialogue-heavy main game mechanic. Some are just straight-up trivia quizzes which are used to build the rapport between you and the character asking the questions, but some offer a little more in the way of interactivity. For instance, there’s a rock-paper-scissors style card game which utilises Aggression, Logic and Emotion in place of those physical objects – think of it as a gamified version of how every three-way conversation between Captain Kirk, Mister Spock and Doctor McCoy went on an episode of Star Trek.

So far, so good, but one minor gripe I do have with the game is that I actually wish each run lasted a little longer than it does. The format of the game, set as it is within the confines of a four-day business conference, means that you learn very quickly that you’ll need to decide within the first few minutes which character you want to pursue. You’ll then need to focus your time on them almost exclusively to the detriment of both the conference itself – which is a real shame, as some of it is really funny – and the other characters in the game. With a little more time, you would be able to experience more of what’s available, which would make every run a fuller experience.

However, that’s a fairly minor issue and it shouldn’t detract from what is, overall, a lovely little experience. With clever writing, a unique premise and a distinct style, Lovingly Evil is a fun way to spend a few hours and, given how 2020 is going, couldn’t we all use a little fun?

A dating sim that deserves to be talked about alongside the likes of Dream Daddy and Hatoful Boyfriend, Lovingly Evil is a funny, smart experience that doesn’t drown you in exposition and keeps it all charmingly light and breezy. Absolutely worth your time.