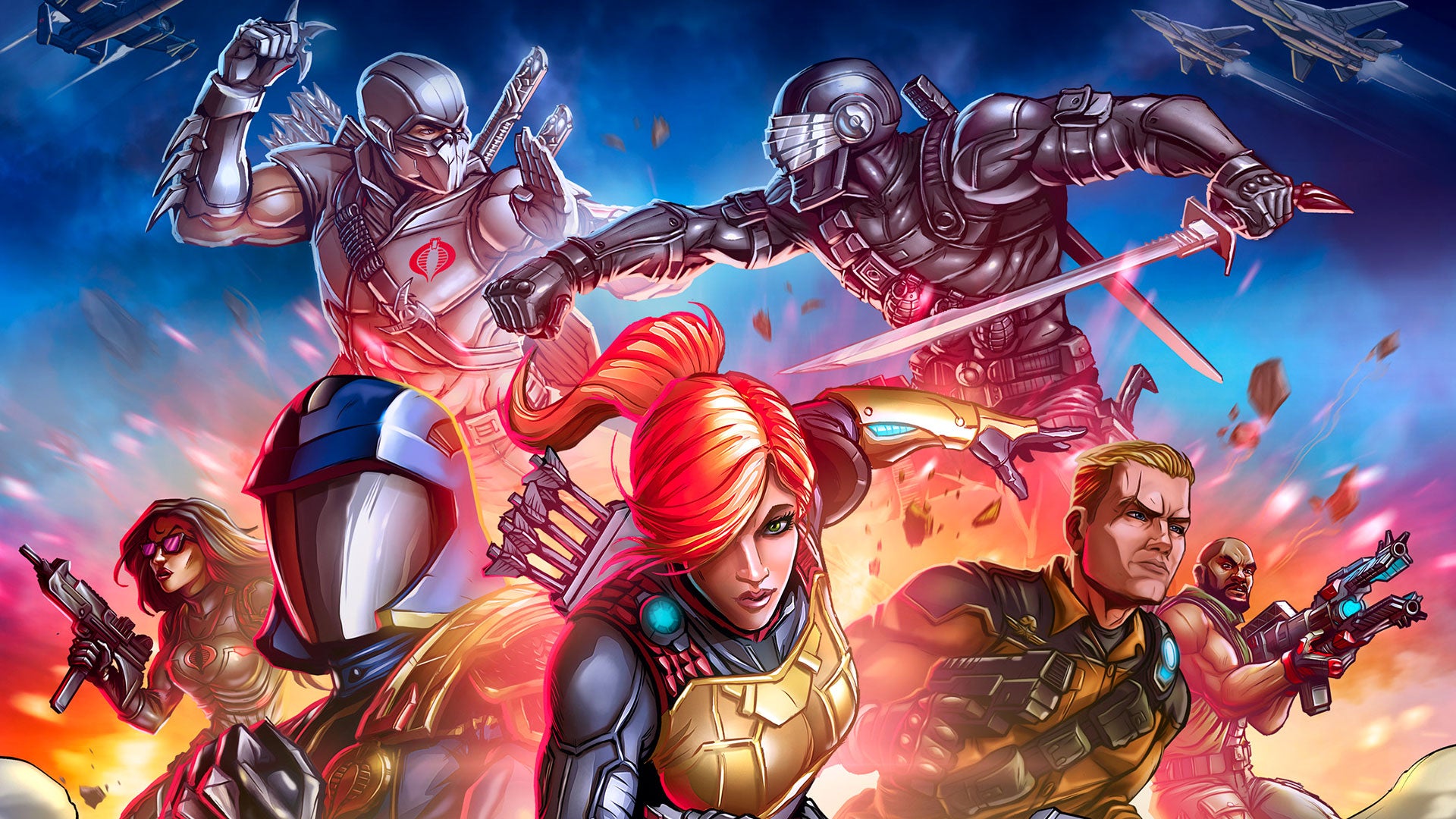 A raft of classic characters and cel shaded visuals aren't enough to save G.I. Joe: Operation Blackout from mediocrity. The Finger Guns Review.

A raft of classic characters and cel shaded visuals aren’t enough to save G.I. Joe: Operation Blackout from mediocrity. The Finger Guns Review.

When the chance to review G.I Joe Operation Blackout came up I found it hard to say no. Why? Well, because anything that has some 80’s nostalgia means I’m on board without hesitation. Plus, from what I had seen, this game looked very similar to Transformers Devastation. One of my favourite games of all time!

The good news is that developers GameMill Entertainment and Maximum Games have taken their inspiration from the 80’s cartoon and left the Channing Tatum films well alone (Thank God). So how does this version of everyone’s favourite American heroes play? Not too bad, surprisingly.

G.I Joe Operation blackout is your standard 3rd person shooter affair, offering little new to make it stand out from the crowd. A full roster of your favourite Joe characters makes up for this as a wave of 80s nostalgia washes over you. The story is as cheesy and implausible as ever with Cobra finally defeating the Joe’s by arming what’s called The Blackout Sphere, rendering the worlds technology useless (apart from Cobra’s of course). As such the governments are in disarray and the Joe’s are now in hiding. Do not fear though in typical All-American Hero style, they may be down, but not out.

What follows the lovely comic book style intro is the main campaign which is pretty lengthy consisting of 17 main missions each of these can be played with two characters. During the campaign you get to play as both G.I. Joe and Cobra with characters ranging from everyone’s favourite Ninja Snake eyes to all the other fan favourites such as Duke, Roadblock, Cobra Commander and Destro.

While it’s good that you get to play as both sides of the conflict, meaning no matter who your favourite hero is, you can at least get some game-time with them, I found this a bit weird. Let me try and explain – One minute you’re shooting away at a bazillion Cobra robot troops, shooting like a maniac and striving to stay alive, culminating with you facing off against a boss character. The next you’ve swapped sides and now shooting the very people you just tried so hard to prevent from dying. It’s a bit odd but perhaps I’m just over thinking things.

The game plays well for the most part, being a Gears of War light, third person running and gunning shooter, mowing down wave after wave of identikit robots that get in your way. There is a quick reload function just like the Gears games with a meter that pops up under your target reticule, leaving you to press the reload button at just the right time to get an instant reload. Unfortunately, unlike Gears there is not cover system whatsoever which is a strange omission considering the nature of the game.

To help defeat the waves (and waves) of enemies, each of the characters has their own signature weapon as well as a secondary standard weapon, each of these weapons are genuinely different which makes the game at least feel like there is some variety. The ‘normal’ guns, despite visual differences, feel exactly the same however. To help further, Characters have a super ability which is their most powerful but takes time to charge up so there is plenty of variety between characters and fans of the cartoon show will love controlling their fave Hero/Villain. Also to help you on your mission you have the second A.I controlled character – although sometimes you would wish they weren’t there as the A.I is terrible. They’re often getting in the way of your line of site, or throwing a grenade at a wall, exploding and dishing out splash damage. Surprisingly there is no online multiplayer but there is a local 2 player option which would be ultimately better, and can imagine being great fun, but thanks to Covid I didn’t get to check this out for this review.

What doesn’t have variety are the levels themselves. Scenery wise, there are a lot of different locations to visit but each level plays exactly the same way. Run forward, shoot some bad (or good) guys, run some more, shoot more bad or good guys. They are all pretty linear with no motivation to go exploring except to find some bonus collectors items. It’s a real shame because I would have liked to have a bit more to do in this game other than shoot wave after wave identical enemies. Things can also get super frustrating when you have big open areas with enemies coming at you from all sides. It’s times like these when it just boils down to a free for all and as such, the game can lose its charm pretty quick. As a respite from all the shooting, there are some other sections that sees the heroes take to some famous G.I. Joe vehicles to do more shooting. A much-needed change up.

Given the quite intense shooting nature of the game, it’s a shame the shooting mechanics are a bit loose. Firing your weapons feels meaty and satisfying enough, but the aiming is too floaty for precise shooting. There is a ‘snap to’ targeting option where you depress the trigger slightly making the reticule Snap to the nearest enemy, handy at times but a pain when trying to shoot a barrel or something. Although this can be turned off in the options.

Graphically this is the games strongest point, with some lovely cell shading for the levels and characters mixing nicely with motion comic cutscenes. They really do bring the comics from back in the day to life. The voice acting is also on point, with some actual thought being put into the characters to at least sound like their cartoon counterpart.

G.I Joe Operation Blackout is a fun game that fans of the Cartoon series will probably love. It doesn’t try to be big or clever or revolutionise the third person shooter. It’s a shame there is no cover system implemented as that could have at least added a little strategy and stop a lot of the frustration setting in with all the mindless shooting. That being said you can tell there is a lot of heart has gone into this game and for me it is just a good old-fashioned video game.

It’s not perfect and there is not much variety but when you do play it, you can’t help but enjoy it for what it is. I guess it must say something if I enjoyed playing this more than I did the Avengers game.

Ori and the Will of The Wisps arrives on Switch today.
Gravity Chase Review (PC) - You Spin Me Right 'round, Baby
Turnip Boy Commits Tax Evasion Review (PC) – Salad Dodger