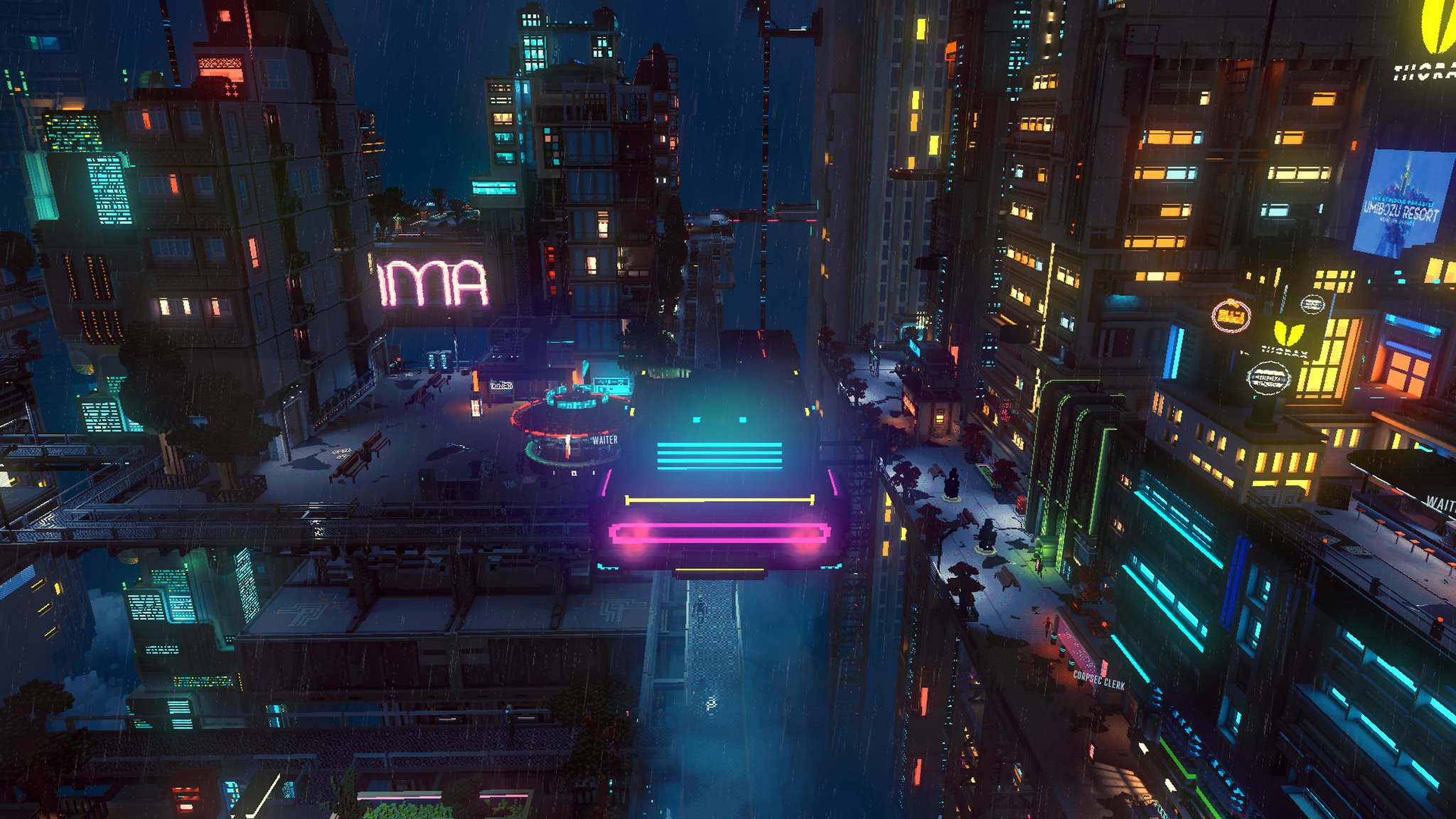 This write-up will be a purely PS4 port based impression of Cloudpunk, as our own Toby Andersen has exhaustively reviewed the original PC version right here. If you’d like to know how the game runs and feels on a PS4 Pro, look no further;

Cloudpunk is one of those Steam-only games I had been waiting ever-so patiently for to release on consoles for the longest time. I remember seeing the games original trailer and concept, falling pretty much in love almost immediately and then that sudden moment of realisation that my PC would laugh at me if I ever tried to get it running left me a little empty.

What was it about Cloudpunk that captured my interest, then? Well, besides from the wonderful visuals which I’ll jump into shortly, there’s a tale throughout that moves from hysterically funny to horrifyingly bleak and back again, committed to its mission to startle you and make you somewhat uncomfortable when faced to make some heavy choices. You play as Rania, a brand new delivery driver for ‘somewhat-corrupt-but-ultimately-paying-your-wages’ delivery company Cloudpunk, arriving in the ‘last’ cloud city of Nivalis with a hope of starting over. It’s up to you to take deliveries and pass them along with no questions asked and you’ll finish your shift without a scratch. Of course, this isn’t quite how it ends up going down and the twists Cloudpunk takes you on throughout are remarkably intriguing. You immediately want to learn more about the company, its dealings with Corpsec (a shady company that effectively controls the entirety of Nivalis) and the underbelly of corruption that runs throughout. For Rania, it’s all simply a first night on the job that’s quite unlike any other.

It lived at the top of my ‘port wishlist’ for the longest time. When it was confirmed a console release was on the way, I was delighted. Thankfully, IonLands’ Cloudpunk lived up to my expectations and more, even if it may still need a little more time in the oven to be fully cooked.

Right off the bat, at the time of writing the console ports are not in a good way. We’ve discussed the worst of it on our weekly podcast and the Switch version is near-enough unplayable. Port developers Merge Games have been very good at responding to players suffering the major issues, and have reassured them all that patches are on the way. But what are the main issues I saw?

Honestly, not all that many.

The most obvious gripe is the framerate, which at busy periods is dreadful. It’s impossible to ignore and shrug off, and was ever present throughout my playthrough from beginning to end. I have always been the kind of player to skip over various tech issues, seemingly happy to see where the game will take me with the understanding tech issues will eventually be fixed, but Cloudpunk on PS4 Pro has made that somewhat difficult if you’re a player who likes a consistently smooth experience and can’t look past a clearly compromised downgrade, with a draw distance and fog that wouldn’t look out of place in an N64 South Park game.

Secondly, the repeating quest lines are a little odd. I can head off to a certain character, get myself a quest, get it finished and then move straight on with my next delivery, only to need ot head back to the previous character a few hours later and we’ll have the exact same conversation first, and their original quest will appear once again on my to-do list. I can chat to them and try to undo said prompt and this technique worked a couple of times, but by the games end I had three quests on my list to do that I had already completed. Mysteriously they were all related to either fixing my flying car the HOVA, buying upgrades or selling broken parts back to your trust mechanic, Emit. It was a strange little bug that I hope can be stamped out as well, I’m a completionist and having quests taking up ‘visual ogling’ space on my HUD became quite the annoyance during the later stages of the game.

And that was about it on my PS4 Pro build. For the most part, Cloudpunk is a gorgeous, fully realised and beautifully constructed, short but oh so sweet experience that I had the pleasure of beating over a couple nights. From the relationship between your protagonist Rania and your AI companion, former robodog Camus (performed wonderfully by Andrea Petrille and Cory Herndon respectively), the back and forth between Rania and ‘Control’ (again, another terrific VO performance by Mike Berlak) and the overall tone made me feel like I was in a Blade Runner-esque multi-layered, multifaceted take on the cyberpunk genre. From exploring the deceptively bright and breezy city of Nivalis to learning its true colours throughout, there wasn’t a moment I felt completely gripped by the strong narrative written by Thomas Welsh.

There’s so much to love about Cloudpunk it seems a shame the console ports have been kicked out to the masses in such a poor condition. Merge Games have confirmed that the PS4 and Xbox One versions are running at the level of the Switch port, which may explain a fair few of the tech issues and, that Merge had to significantly downgrade the game in order for it to run on Switch at all – it would appear that some of this has bled over into the big brother console counterparts. I remember thinking during my playthrough that the games voxel art style looked beautiful, so if there’s a patch coming that’s going to make it look even better?

I’m all for that.

For now all I can really recommend is that Clodupunk is absolutely worth investing your time into and will provide at least six to seven hours of solid, gorgeous gameplay and the dark world of Nivalis is somewhere you’re going to want to immediately fall into and learn every nook and cranny of (talking with NPC’s when on foot is one of the games absolute highlights). Perhaps hold off though, until the games are all fixed up and run/look how they’re supposed to on your console of choice. Sean had some heavy issues on his base PS4 version that I, on my PS4 Pro simply didn’t run into, so there’s a strange imbalance currently occurring in people’s experiences,which means I simply can’t recommend you jump out immediately to pick it up because, well, I don’t want you to lose your save point just for opening the pause menu (yup, that happened to Sean).

The neon-soaked world of Nivalis awaits, though you’re going to want to hold off until you take the journey for the time being.

Also, I need more Huxley. Thomas Welsh if you’re reading this, let’s get a spin-off going eh? You know you want to.

The console versions of Cloudpunk then are, at the time of writing, buggy and a little broken in places they shouldn’t be, but if you’re lucky enough to power through without any major issues, you’ll lose hours to the fantastic narrative, terrific central character performances and gorgeous neon-soaked visuals.

Cloudpunk is out now on PC, PS4 (reviewed on PS4 Pro), Xbox One and Nintendo Switch.

Morbid: The Seven Acolytes Review (Xbox One) – With Souls-Like These…