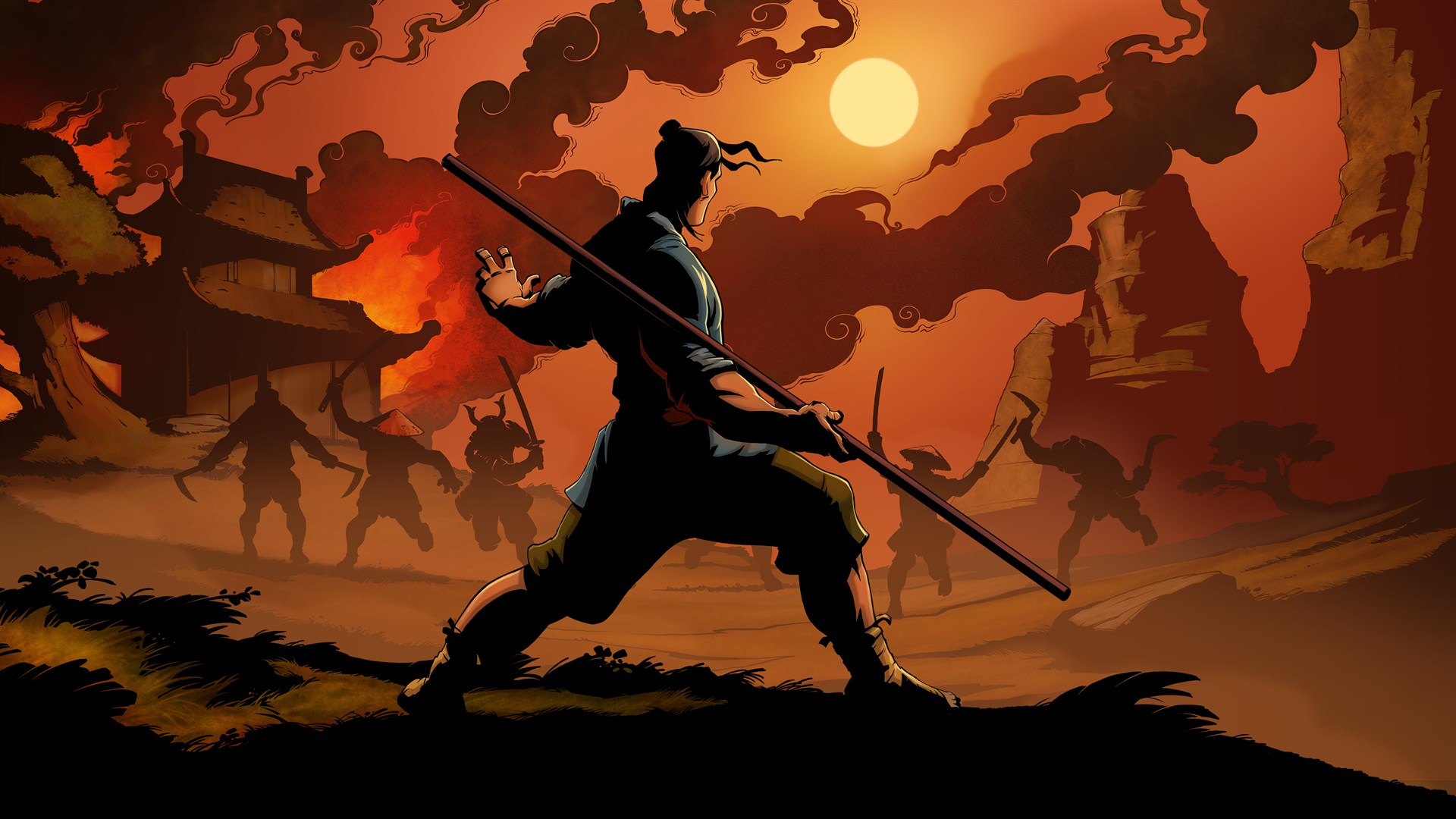 A fun to play and stylish looking throwback to side-scrolling brawlers, but does the gameplay loop get too repetitive after a while?

It amazes me that anything ever got done in ancient China. You wouldn’t think that an empire would ever be built, what with all the avenging, village burning and myriads of bandit clans about the land. I say this because 9 Monkeys of Shaolin is no different.

You’re a fisherman, the last remaining member of your family is killed, and you seek revenge on those that wronged you and then some. You’ll take to the streets in rage and lay waste to all those that stand in your way… et cetera.

Yes, it’s pretty straightforward when it comes to motivation and plot, scoring absolutely no points for originality. But, from a gameplay perspective, smacking Fu’s upside the head with a range of stick and foot combinations is no less terrible than when Axel Stone does it.

It’s just whether it can have a lasting appeal with its rinse and repeat gimmick with what is essentially the same mission over and over. Let’s strap on our sandals, load up on green tea and travel the lands…

“Hello. My Name Is Wei Cheng. You Killed My Grandfather. Prepare To Die”

As I said at the start, 9 Monkeys of Shaolin wins no points in the “Most Original of Stories” competition. It’s the age old tale of countless kung fu flicks from decades past. However, I knew that when I went in to it. I know this isn’t a Hideo Kojima game, I’m not expecting my staff to house the reincarnation of the deceased village elder in it. That it pays homage to the movies of old is quite refreshing, for a change.

You, Wei Cheng, have already lost your parents to the Wokuo clan as a child. Now, some years later, they’ve come back to finish your village off, killing your grandfather in the process and leaving Wei for dead. Which you would be, had a group of monks not saved you from your trip to the pearly gates.

These fellows are the titular 9 Monkeys of Shaolin, who practice the martial art of Shaolin. The more astute of you will notice, if you play it, that’s there’s only seven of them and one smuggler hanging out with them. It’ll make sense down the line…

Initially Wei’s saviours, they soon guide him towards the noble art of not immediately getting revenge on those that ruined his village and life. Instead, they train him between missions in the way of Shaolin, so that Wei can transcend the capabilities of simple fisherman to all-powerful master of martial arts.

Which, surprisingly enough, focuses on sending you out to beat the crap out of many bandits, Hanyo demon mask-wearing enemies and pirates that dare look at you funny. Or happens to be in close enough proximity to hit you, or take pot-shots at you from behind shrubbery or hanging off of trees. Basically, anyone that stands before you and stops you progressing onward to clear the mission. Which is everyone.

If you’ve ever played a Streets of Rage title, or Fighting Force, or even the Alien vs. Predator arcade game, you’ll know what to expect from this. If you haven’t, here’s what to expect: you start from the left hand side of the screen and make your way to the right, like a more violent Mario. You hit enemies until their life bars eke out, they disappear from the screen. At the end of a mission/level, you either take out a boss or a certain amount of bad dudes until the mission deems you’ve had enough. Or you die, obviously.

Attacks are fairly easy and categorised into three types: your basic thwack, a thrusting attack that works against armoured enemies, and a vaulting kick that closes the gap. You can tuck and roll out of (or into) danger, and you don’t have a block button, per se. Instead, you have a parry button. Think of it like Batman or Spider-Man: you see the telltale attack, in this case preceded by an orange glint on an enemy’s weapon, and a press of parry sees you deflect the blow. It does become a bit rote after a while, as a handful of baddies surrounds you and you’re just waiting to pull off the one-two parry-strike combo.

Under your health bar, you have three blocks, and these are Qi attacks. Initially, these are activated by just holding an attack button for longer, but they evolve into more as time goes on. You then learn the Southern Elements, which are techniques that launch your enemy so that you can juggle enemies for combos. If there’s two of you playing, you can have a game of keepy uppy going with them… if you like.

But if you want some fancier moves as you progress, wait until you unlock the magic seals. These bad boys let you use a variety of super special moves, like the one above, to pull some proper old fashioned wire-work kung fu off. And alright, perhaps Sobaka Studio didn’t have the budget for mind-blowing particle effects, but these look pretty sweet all the same.

And of course, in keeping with modern sensibilites, 9 Monkeys of Shaolin does indeed have a skill tree upgrade system. Seems like these things are mandatory now, if a little pointless. You earn tokens for every mission complete, which then get pumped back into skills when the appropriate brother is spoken to.

They’re all pretty standard: critical hit success rates and damage dealt, the distance your vault kick reaches and whatnot. I’m sure the more hardcore player could go through without upgrading anything, but I figure that as the game gives me these as currency, I might as well spend them.

The only boggle I have is the projectile enemies, in that you parry them perfectly and launch their attack back at them. Are all fishermen trained in the art of the perfect parry, between float threading and line casting…? Alright, it’s a small niggle, it just struck me that there’s no real challenge to them, just time it right and Bu’s your uncle.

Ancient Wisdom And Patience Can Only Stretch So Far…

As a game, it’s fun if you’re a fan of side-scrolling beat ’em ups. You can’t go wrong with 9 Monkeys of Shaolin, and doubly so if you can get someone to play online or local co-op with you as the monk Daoshan. From that point of view, it’s a hoot.

From a narrative view, however, the motive of Wei and the other Monkeys becomes a bit stale over time. You want revenge, I get that, but… when? Right, fine, you can’t charge into the higher levels without some skills about you. But why do I need to smack up these bandits when there are six more perfectly able monks that could do it? Oh, right, you’re teaching me the ways of peacekeeping through violence and some supposed character building.

My point is, the mission structure gets a flat if you have to have a lecture each time you pick one, complete it and come back. It feels weird to be chastised for being violent, yet that’s what I’m being sent out too. I’d rather have the option to play it through like an arcade game but sadly, that’s not available.

Have Your Green Tea And Drink It

To conclude, 9 Monkeys of Shaolin is a great game if you’re a fan of this genre. Which… sounds obvious, now I’ve written it out. What I mean is that it brings nothing new to the table, in terms of story, gameplay or innovation. But it’s not trying to, which is what makes it fun to play.

It’s not messing about with established trends by say, adding a card game in the middle of a boss fight. It’s a simple throwback, with some simple if yet bright and pleasing graphics, to a time of straight-up brawling. It’s not going to blow Streets of Rage 4 off of its throne of nostalgia, but it’s not trying to.

It’s a blast to play, even if you disengage from the story, made even more fun if you can get a mate in to help you. There’s higher difficulties and the relevant achievements (on Xbox) to unlock, should you want to push yourself. Or conversely, just kick back and have some fun with a nod to the “good ol’ days” of gaming.

It won’t blow your mind with innovation or story, but 9 Monkeys of Shaolin isn’t trying to. It revisits the 70’s style of kung fu games, and has fun with the source material. Either solo or with a friend, there’s fun to be had here.

9 Monkeys of Shaolin is available now on Xbox One (reviewed on), PlayStation 4, Nintendo Switch and PC.