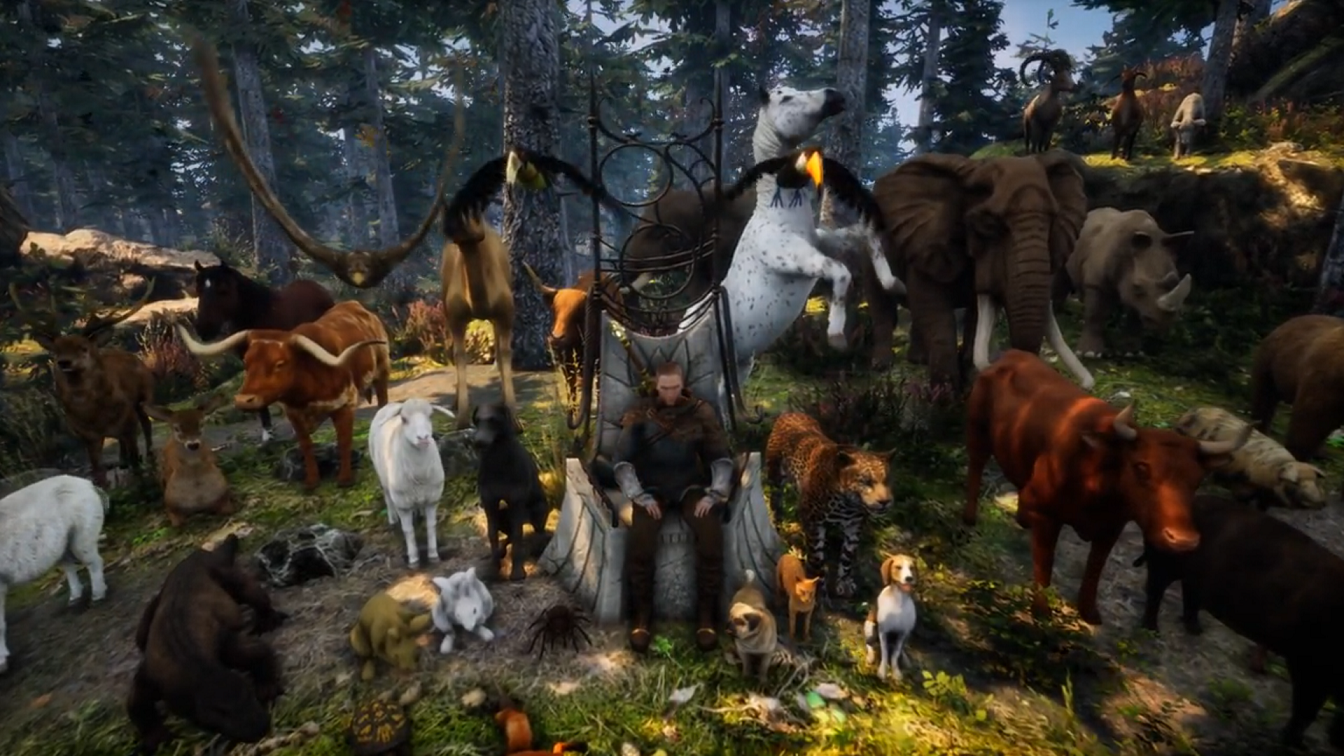 We save the animals instead of hunt them in our Hands on with Animal Rescuer - an open world collectathon that's PETA friendly.

We spend far too many games hunting and killing animals. Whether it be taking pelts in Red Dead Redemption, actual hunting simulation in Hunting Simulator, making bags out of them in Far Cry Primal, or harvesting them for their medicinal properties in countless RPGs, we aren’t nice to our furry friends in the world of gaming. It’s no wonder then how popular games can be when you don’t have to kill them. Think of the cute little kitsune in Ghost of Tsushima, guiding you to shrines and letting you pet them in thanks – we pet millions of foxes as a community.

Part of me then really understands the drive behind creating Animal Rescuer, a game from four Turkish friends who form Turquoise Revival Games. Instead of hunting and killing, here the objective is saving, healing and yep, petting every animal you can find.

We spent some time with the most recent build of the game, which is currently on Kickstarter looking for further funding. There is a prologue also available on Steam for free, should you want to save some animals and try it out for yourself. Fair warning though, it needs work.

The story is crepe-paper thin; introduced by a robotic narrator who sounds like Siri, you are a nameless medieval peasant. This is your home. This is your wife. She is so sick. Word for word, this is how it starts. In exchange for a cure for your wife’s illness, a witch tasks you with saving all the animals in the world, and you’re given a medallion which keeps you safe from wild animals. Think of it as a pokedex, as it will keep track of every animal type you save.

You are kicked out of the door and that’s it. There’s not really another iota of storyline to report. There’s no names, no backstories, no history to the world. There are a few NPC quests dotted about, (find this library card, or this ceremonial dagger) but they don’t even talk to you, Siri does, and all she does is summarise what they want and remove any last vestige of personality. Instead of story this is a game about exploring. And collecting a lot of plants.

You will find animals all over the large archipelago of islands that make up the game’s world. If there’s a positive here, it’s a big world to explore with some dozen or more islands. Many of these animals are sick, and have a cross over their heads like a pharmacy in Italy at night. You must mix alchemical medicine to save them, which is where the plant gathering comes in. There are some 50 species of plant and some 50 odd animals to find, but you lose track of the amount of plants and what medicines they create, as well as where the animals were very quickly. There’s no way to keep track of where something is on the world map, and no automatic log either.

Gameplay for the most part falls into the roam-the-world-and-gather-plants category, then head back to base, concoct as many random potions as you can, and then go back out and hope you can find all the animals again. It’s pretty annoying, and just giving you the ability to mix them on the move would have helped massively.

You might think from the screenshots and the pretty lighting that the game world looks nice, but in motion it’s very basic. NPCs and animals alike feel like low poly models with no real life or animation to them. The world is a few steps up from a Minecraft world, with textures to match. Camera movement is sluggish even at the highest sensitivity and movement of your nameless hero is all over the place.

Another major part of this strange concoction, but one that you’ll want to avoid as much as possible, is combat. For some reason there are a lot of medieval gangs, intent on poaching dogs and cows in the world of Animal Rescuer. They stick a stag in a cage, and then just sort of hang out around it until you stumble across them, and of course they hate you. You are the Animal Rescuer after all.

Your right trigger button is slash with your sword, but half the time the command doesn’t work, and when it does, you launch into a low frame rate floaty attack that 50% of the time won’t connect. Duck forward and back and try to throw another sword swing which will take you another five to ten seconds. The enemies you are fighting seem to exist on a different plane of time to you, one where there is no lag between command and movement, and where they can slash and roll to their heart’s content. I was roundly killed 75% of the time I encountered enemies, and though you do gain levels that will make you a little more competent, its not a fast process.

There’s no feeling of connection to the combat, it’s just floaty and disembodied, try-to-slash-faster-than-the-other-guy mayhem. And then you’re dead. If Animal Rescuer’s Kickstarter is successful at all, the first thing to do is get someone in who can program combat, because at the moment it’s an impediment to even being able to play, let alone enjoy, what’s here.

There are some nice ideas, but they are overshadowed by a game that needs a lot more developing to really be called playable. The animals are nice, the idea of saving them is different and for an hour or two I was interested in the struggle. You can pet dogs and cats all over the place, and there is a lot of game world to explore. But its empty of anything interesting to do.

My humble suggestions would be; give the world some history, invent factions of animal kidnappers, give us more exotic animals than your average barnyard. Give us combat that works, NPCs that actually talk to you and text that is their words rather than Siri’s summary. I want actual characters with names and backstories and requests. The strangest thing is I never encountered a quest to find a little girl’s missing cat, or a prized performing goat, or a pedigree dog. There’s no personality on offer anywhere.

It’s hard to know who is going to be able to look past the terrible combat, floaty controls and low poly animal models, the fact there is no story and Siri reads out your fetch quests in robot speak, or the fact that gameplay boils down to harvest the plants of the world to mix medicines.

I think there will probably be many who think like I do. I wanted to like this game, I like the sentiment behind it, saving animals rather than killing them. But I can’t look past the rest of the crippling issues on offer. That idea alone is not enough to carry the game for even a few hours as it is. It needs more to build it into something worth exploring.

For now Animal Rescuer is still in development, and I hope there is enough interest for it to continue. At the moment petting a few dogs is not enough.

Disclaimer: In order to complete this article, we received a code from the publisher.