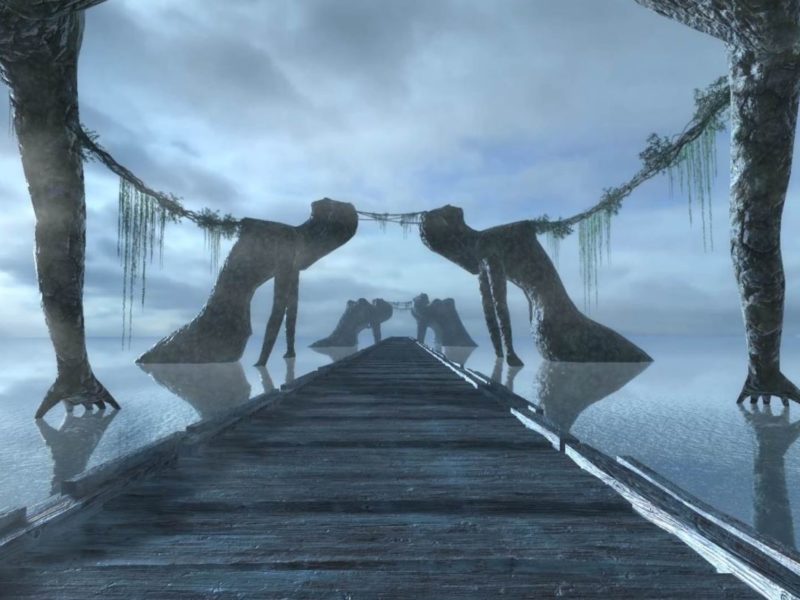 Time manipulation is an evergreen gaming mechanic. Whether it’s to solve puzzles in Braid, reverse your mistakes in Prince of Persia or in order to get one over on an enemy in the likes of Dishonored, messing around with time can be really fun. Unfortunately, developers Skobbejak Games failed to find this fun in Tyd wag vir Niemand (translated from Africaans as “Time Waits For Nobody”). This first person puzzle game that allows the player to slow down time at will has some really interesting ideas but fails to execute them with much regard for the player.

Tyd wag vir Niemand begins as you ascend a path to a pyramid that has been unearthed in antarctica. As you do so, large rocks start to float around you which is the first hint that something isn’t quite right here. The team that was sent in previously has stopped responding and you’ve been sent in to find out what’s going on. You’re told explicitly “DO NOT GO INTO THE MACHINE ROOM”… so what do you do? You go into the machine room. A huge drum begins to spin in front of you and with a flash of light, you’re transported into a series of abstract puzzles that need to be solved.

In these puzzles, you now have the ability to slow down time for a short period. Press R2 and most of the in-world objects will slow to a crawl. A ticking noise that gradually increases in speed indicates how long you’ve got before time resumes its usual pace but if you don’t want to wait for it to run out, you can simply press L2 which takes the world back to normality.

Although, normality is a poor choice of phrase there as the world seems to run at a million miles per hour in Tyd wag vir Niemand. After a leisurely float through some picture frames in the first level, you’re introduced to a platforming level with massive bendy poles that spin rapidly and – you guessed it – you need to traverse them to get to the exit. It’s impossible to step on them when they’re spinning at their usual thunderous pace so you have to slow down time and cross them when they’re moving slower.

This concept is repeated throughout Tyd wag vir Niemand. Every puzzle is solved by using this mechanic, whether it be to slow down fast moving pillars that will crash into you, slowing down objects that would run into you or slowing down platforms that are moving faster than my nan when the DJ announces that the food is now open at any wedding we’ve ever been to (that is to say, she moves like lightning. Sorry Nan).

Tyd wag vir Niemand is a game that requires precise timing, even when everything is slowed down. In one level, you’re protecting a ship that moves at a normal speed, even after you’ve hit the clock slowing powers, from wave after wave of fast moving structures. Here you’ve got to measure the speed of the ship against where the pillar will be and if you don’t that ship will crash and you’ll head back to the last checkpoint. In another level with furniture that flies from one side of the room to the other as you head down it, the margin for error is so slim that I must have restarted the section at least 50 times before finally passing through it by dumb luck.

That’s a prevailing feeling after playing Tyd wag vir Niemand; None of this feels designed well enough or with enough forethought to carry off its intentions. Even from the second puzzle, where the only way to complete the level is to stand on the end of a pipe that’s spinning wildly beneath you, hoping it won’t throw you off, things start to feel slapdash. In the level where you’re protecting the ship, this game demonstrates that the game lacks the necessary play testing and design iterations when a column (there purely for scene setting purposes) hides an integral moving platform that’ll destroy the ship. During a later level, there’s a platform that moves so fast even when slowed that I couldn’t decide as to whether it was by clumsy design or a bug. The game borders on sadistic at times, with puzzles made with a purely irritating level of difficulty and checkpoints so sporadically placed that a failure could mean repeating it all again. The character movement is weirdly erratic too, as if the character is moving through occasional trenches of treacle, slowing them down before they can move freely again. I’m not afraid to say I’ve closed this game in resignation many times during my time with it. I’ve audibly said to myself “life is too short to bother forcing my way through this”.

And you will be forcing your way through Tyd wag vir Niemand as it gives the player almost no incentive or motivation to push through the many annoyances it has. There’s a narrative in the game, portrayed via text passages delivered on plain white screens. There’s no vocal work or imagery to accompany these simple sentences which means that the plot itself fails to land at all. There’s a tedious link between the locations the puzzles are in and the narrative but I’ll be honest, the way the story is presented makes it really difficult to follow or to care about.

Tyd wag vir Niemand does have some positives worth mentioning. The vast majority of the game looks great. There’s a high degree of polish applied to the visuals here and the variety of environments achieve the abstract appeal it’s aiming for. The soundtrack to the game flits between being repetitive and mundane and excellent. When the music is good, it’s very good.

In Tyd wag vir Niemand, abstract yet repetitive puzzles make way for frustrating challenges that manage to make time manipulation boring and irritating, something I thought impossible. It can be easy on the eyes at times but that’s little consolation for a game that actively encourages the player to give up through overtly aggressive and clumsy game design.