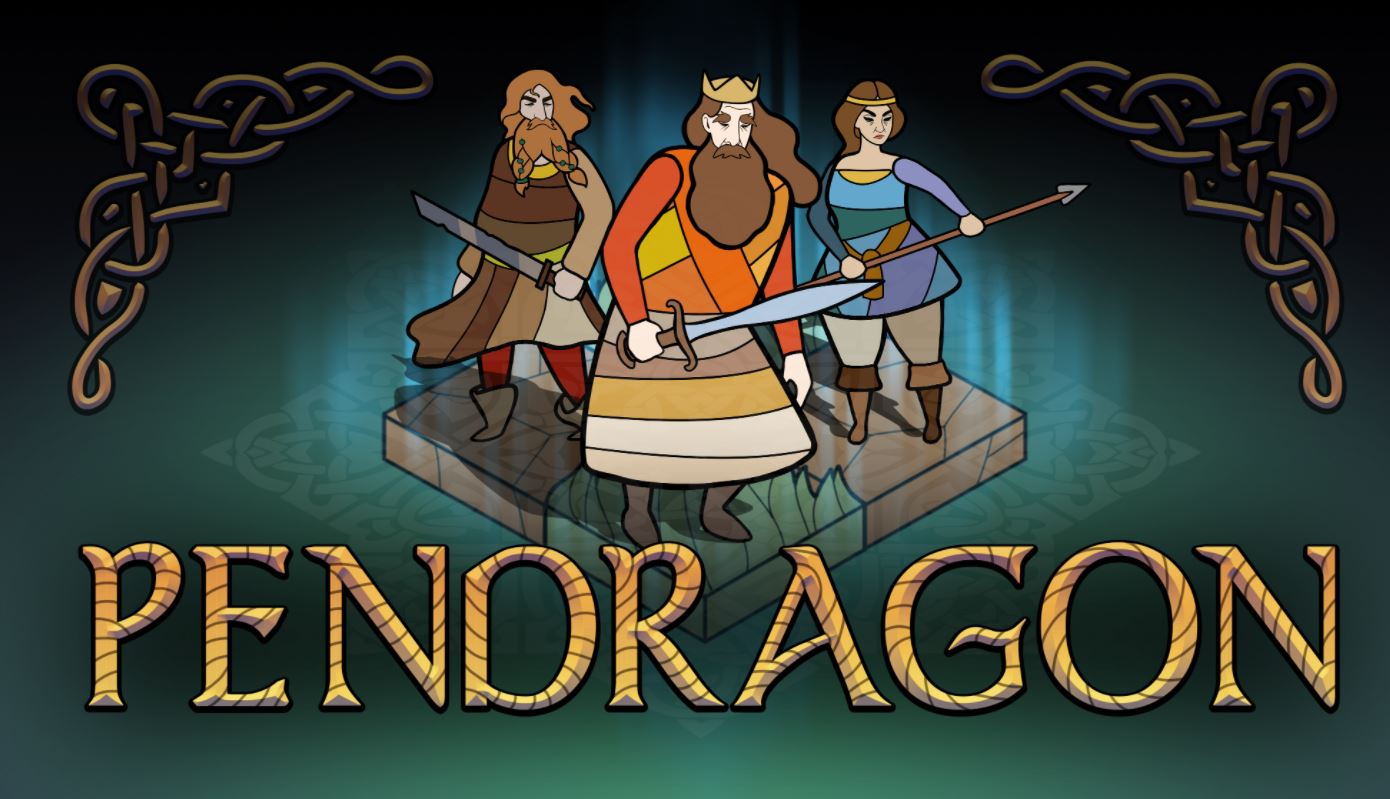 An impressive blend of narrative and strategy, Inkle’s Pendragon tells a unique tale with each move you make. The Finger Guns Review.

An impressive blend of narrative and strategy, Inkle’s Pendragon tells a unique tale with each move you make. The Finger Guns Review.

Inkle doesn’t do things like other developers. With “80 Days”, they put a steampunk twist on Phileas Fogg’s around the world journey and rightfully received numerous BAFTA nominations for it. They created an entire hieroglyphic language for “Heaven’s Vault” while ingeniously combining 2D character art and 3D environments. Of course their latest title Pendragon, an innovative blend of turn based strategy and “choose your own narrative” adventure, is unlike anything I’ve ever played before.

Camelot has fallen to Mordred. The round table has been broken. Merlyn has disappeared. Lancelot du Lac has returned to France. Guinevere, presumed dead by Arthur, has been hiding in a convent. Britain is falling apart. In a last ditch effort, the fallen King Arthur is to face off against Mordred Pendragon and his forces and is to do so alone. It’s the player’s job to travel the width and breadth of the country to find Arthur and join him in his final battle at Camlann.

The destination isn’t really the important part of Pendragon however. It’s the journey that stands out in this game. It’ll be different each and every time you play and adapts to your decisions.  Each character begins their adventure in their own location each time you start the game but where you go from there and what you do at each stop along the way is down to the player. Characters you’ve met before might respond differently to you depending on your previous actions. Knights might join you on one run and try to fight you in the next. Over a few in-game days, you’ll have all manner of choices to make like where to travel to next or whether to fight or flee when things get tough.

Each stop on the way to Camlann presents the player with a procedurally generated grid map with a handful of constants for every area. There’s always a starting square and an exit square and reaching the latter will clear the board and will allow the player to move on. What happens on the rest of this grid will be up to the random generation and the players actions. Maybe you’ll be set upon by a boar or a group of giant spiders. There could be a mystery character waiting for you that threatens you, an old friend looking for revenge or a bunch of Mordred’s knights waiting to kill you. There’s often some foreshadowing involved that can give you a hint as to what to expect but quite often, a stop on the road can throw something totally unexpected at you.

With each move on these grids, Pendragon progresses its narrative. Sometimes it’ll be an observation about the world around you. Other times it’ll be a description of an enemies movements. If there’s more than one of your characters on the board, it could be a conversation between them. If there are potentially hostile or outright aggressive opponents on the board, they might try and trash talk you. There’s very few times when you make a movement with a character and there’s not an accompanying piece of story to go with it.

The story generation is tied to a deep and intricate strategy board game that might look familiar but is deceptively unique. As you move around the board – moving 1 character per go – you’ll claim squares in your colour. Claimed space allows faster movement in single directions. When moving you can do so in two ways, either linearly or diagonally, but in order to change the way you’re moving you’ve got to change stance which costs a turn. The only way to get around that is to head to higher ground. Blocks that are elevated allow you to change stance and move to any of the 8 spaces that surround it. Most characters you play with in Pendragon can only attack linearly too, adding another layer of complexity. If you want to attack diagonally, you’ll need to unlock a skill.

The special abilities of each character in Pendragon are both tied to their origins and their experience during the journey to Camlann. Morgana, for example, begins the adventure by being able to pacify hostile animals and make them friendly. This is a trait she has because she’s a forest witch. Her decisions on the road might add to that skill with new abilities like being able to attack diagonally or travel from one side of the playing board to the other.

In order to use these special abilities, you’ve got to have enough resolve. This is a consumable which is both granted at the start of each location based on your morale level and can be picked up on most boards in specified squares. Morale is a gauge which both grants resolve and acts as a timer for battles. After a large number of turns, the morale will start to fall and if it reaches zero, your party will flee. To keep morale up, it’s good to pick up allies on the journey and ensure you have enough rations to feed them all each morning.

There are 9 characters to play as in Pendragon, each of which have their own dynamic with the rest of the cast and their own special abilities. You begin with just Queen Guinevere, the unfaithful wife to Arthur, and Sir Lancelot Du Luc but as you recruit other characters to your party, they unlock as starting characters for subsequent runs. There’s also a progression system that unlocks higher difficulties the more you complete the game.

By combining turn based narrative with a deep grid based strategy game with a massive amount of variance and variety, Inkle have created a truly powerful storytelling tool here. On my first run with Guinevere, I murdered a villager who stood between her and Arthur’s final battle and this unlocked a new skill which turned the Queen into a real force to be reckoned with. Unfortunately, she died in the final battle – but the one ally I managed to recruit took up the mantle and finished the battle for me. In my second run with Lancelot, I died within the first few locations because I got a little over confident and waded right into a group of hostile knights. With Merlyn, portrayed as a kooky old man who’s not sure if he’s coming or going, I managed to round up a veritable army for the final battle. The moment to moment tales of love and war can be as grand as the overarching ones at times and because of the random nature of the content delivery, they’re stories that only I’m likely to see in that way.

Like so many times before it though, procedural generation and the random nature it can bring can be a double edged sword. Not every run will be interesting and you can end up going from place without anything of interest really happening. It’s also possible to have some terrible luck and not have enough rations or safe places to stop, ending a run abruptly and unceremoniously. What I will say is that the dull runs are few and far between with Pendragon. The generation of the stories is fun or interesting 85% of the time, which is far more than I can say for other games that have attempted something like this.

The actual in game stories are joined by optional fire side tales. When you stop for the night, one of your party might decide to tell a story. Contained here are 25 tales written by 23 authors (and a few by Inkle themselves) who entered a writing competition and were selected by the developers. Some of these are poignant. Some are funny. A few are poetry and others are cautionary tales. The party you’re with will respond at junctures in the story too, just to live these up a little.

I need to mention how great Pendragon looks and sounds too. The character art is like stained glass windows, their bold outline and solid colour bodies giving them a Arthurian and legendary feel. Some of the characters, especially the elderly knights, carry a lot of personality in them too. The soundtrack is centred around this one trumpet tune which is both a perfect accompaniment to the setting but also a real ear worm that I’ve found myself humming a few hours after closing the game.

If there’s one aspect of the visuals I’d like to see changed it would be to add the ability to see through certain characters or environmental objects. A few times during play I’ve been trying to get between Mordred’s forces but because they’re in front of one another, I’ve been unable to see the stance the enemy knights are in. Sure, it’s only a little trial and error to move there and get a warning from the game that says “This might damage X” but I’d have preferred the ability to see that ahead of time.

Whether you know the stories of Arthur & the fall of Camelot or not, this game allows you to build your own Arthurian legends step by step. Pendragon is a near-seamless blend of procedurally generated narrative and a strategy game that could have carried itself alone. Combined, they make one of the most unique games of 2020 and while it’s not without its flaws, it’s a game I highly recommend you try.