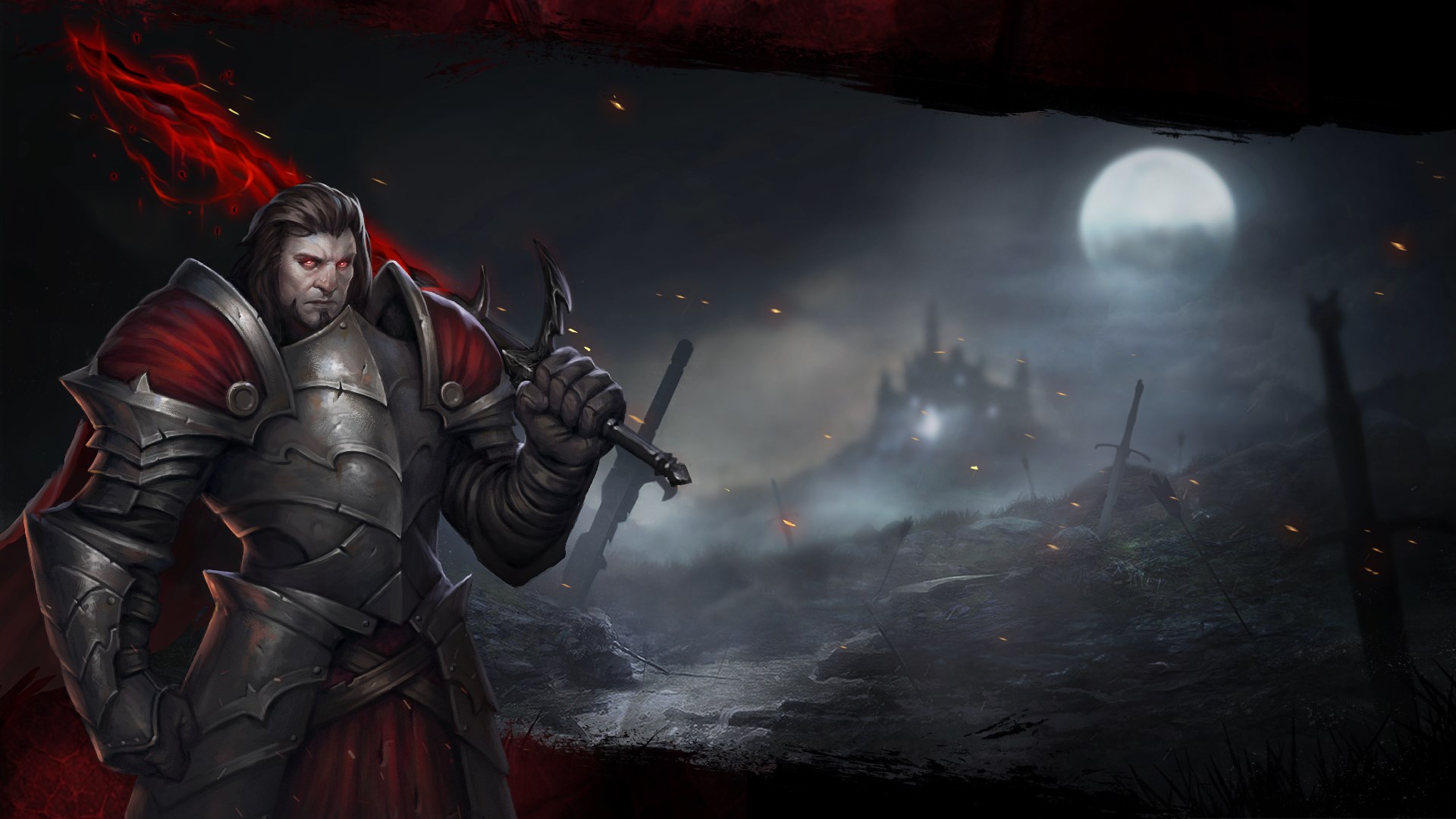 A turn-based tactical battler and empire sim, Immortal Realms Vampire Wars pits vampires against humans, in a slow and dull war of attrition. It’s your will to play that’s being drained. The Finger Guns Review:

So, if vampires existed, and if they had mostly come from human stock, then chances are they would have all the same failings, vices and foibles as humans. One of those would have to be the lust for battle and war, and the incapability of just existing in some kind of peace with each other. They are also inherently overlords to the human cattle, and so rebellion always ferments in a vampire-ruled world.

Such is the setting of Immortal Realms: Vampire Wars, a game with a terribly generic title (one that had me questioning if it was part of another franchise). It’s not enough to rule and suck blood and live in debauchery and decadence, no, we must also wage war as well.

IRVW is both an empire-style war sim where you claim regions and exercise control over your blood-bags (sorry subjects), and a grid-based tactical combat game, where you will face off against both human rebels and other vampire factions. So is it bloody good, or will it drain the lifeblood right out of you? Let’s take a look.

In a game like this the UI is probably the most important thing. Good then that there is a tutorial section, just not a very good one. It does not take long before you are being asked to perform actions and not told what buttons to press, or where on the massively cluttered screen the info you need is placed. The type is too small, every direction on the d-pad brings up another section of crammed information you can’t really control until you’ve learned more and spent dozens of hours with the game. The tutorial doesn’t really didn’t tell you how to actually perform most of the tasks it gives you.

Beyond the tutorial you will find plenty of very necessary commands hidden away under other menus or in the Y menu, or by pressing another button over units you’ve already selected. For example the action button is necessary to do things like claiming land and healing units, but its hidden in tiny type at the bottom of a screen overflowing with information.

Then there’s a card deck hidden at the bottom of the screen, and some way of selecting different units, and its all handled under the shoulder buttons, but only once you’re in the right menu. My favourite was discovering at the end of the tutorial that I couldn’t even use these menus to equip a helmet, I needed to place a helmet card over the top of my unit on the world map and actually play the card. Overall it’s a UI that is pretty unforgiving and unintuitive. It drained the lifeblood out of me before I’d hardly started.

A Vampire army doesn’t really run on its stomach, it runs on blood.

Beyond the story of warring factions and a human rebellion, you’ve seen everything the narrative of IRVW has to offer in many other games. The Dracul, Nosfernus and Moroia are the three vampire factions and the campaign follows each for four missions or so, drip-feeding you all the different mechanics that you just learnt in the tutorial and then had to forget about for hours.

The very first campaign mission seems fundamentally flawed, giving you strict parameters such as no recruiting and no levelling up your general. This means that you need to complete the mission without losing any units, only it becomes pretty obvious very quickly that the difficulty is actually quite high and you can’t hope to do this. So I try again, only this time finding out that actually you can recruit units, only you are told you cannot. You need to place certain cards over buildings you find on the world map and units will appear after another bit of unnecessary UI.

In campaign you move round an overmap, claiming regions and subjugating the villagers. Holding and capturing regions gives access to the populace as your own drainable cattle. If you run out of blood your vampire army will begin to starve and die. Immortality only lasts as long as the blood supply, and blood is the main resource in the game, however it doesn’t only replace meat or forage, its used for lots of things, from recruiting units, to upgrading buildings and using your card deck, which doesn’t make a whole lot of sense.

This overworld portion of each mission is more like a board game than anything else, with regions representing sections you would move your counters to. With turns, action points ruling how many spaces you can travel and cards to draw, it all feels like it might have just been better off as a complicated tabletop. That said, this overworld is the best part of the game. Campaign will take most players dozens of hours to complete, but mostly because it is a very slow and rawn out process to actually move through missions and the combat.

For a game whose blood and butter is tactical combat, the battle system in IRVW is very dull. Your units fall in on a square grid facing each other and slowly move together and fight. There are a few houses, trees or detritus as obstacles, which can be used to cause choke points.

The battle system is really quite basic and I did not have much fun with it. Hit your enemies repeatedly until they keel over. There’s little in the way of interesting moves and the small supply of cards will get dull fast. There’s a retaliation system which I really didn’t like, which means that you get hurt even on your own turn, unless you perform a finisher, or are using something long-range. Unit placement gives a little tactical edge, in that attacking from behind nets higher damage for example, but its all really simple.

Somehow at the same time its really difficult, and mostly because of bad design choices. Those choke points I mentioned, well mostly they are caused by your own units, because you cannot walk one unit through another, leaving you with a bunch of units unable to participate in a battle happening at the only point where the two armies meet. You are constantly checkmated by your own forces.

Because of the retaliation and the way most battles devolve into only a couple of units being usable at one time, battles are often just wars of attrition rather than tactical. It’s seems to me that the designers realised this, and incorporated a strange feature into the overworld portion. When you encounter any enemy force that’s not a boss, you can auto-resolve the battle. This is great if like me you find the grid-based battle system pretty lacklustre. Of course, even that system has issues, because you can easily auto-resolve to death, and I lost my Vampire lord after doing this a few times, effectively ending that mission attempt right there.

Loading in Vampire Wars is very slow, and considering there’s nothing taxing here graphically it makes little sense. I was able to write lines of this review while waiting between overworld and battle, and back again.

There are very few unit types, and all of them shout the same small number of stock phrases constantly, and get it each other’s way. There is some really campy and overdone (even for vampires) dialogue and voiceover work, and to add insult it is often cut off mid-sentence by the game wanting to load the next piece of eye-squinting UI.

I also got pretty annoyed with the action button. One second X calls up your units actions and claims land – it makes you think it’s a positive button to press. But just moments later you call up your card deck to recruit or heal your units and the action button is now the delete button. I lost count of the amount of times during the first three or four missions, that I accidentally threw away a decent card, without even a ‘did you mean to throw that card away?’ warning message. Once I threw away all my cards in a row, and had to restart the mission. I know, stupid right, but it shouldn’t have been possible.

A dull by-the-numbers tactical strategy game, where the actual draw, the combat, is the dullest part. It has an unnecessary card-deck mechanic grafted on top and horrible, unreadable menus shoved into every corner of the screen. Every part of Immortal Realms: Vampire Wars screams that it should have been a board game instead of a video game, and I think I would have had more fun actually playing a tabletop version.

Even for strategy nuts, I would recommend trying a demo first or waiting for a cheap sale, because £44.99 can get you a much better game than this.

Average in every respect, and with little to reward or keep you playing, Immortal Realms Vampire Wars is a dull strategy sim, concealed behind an acceptable veneer. When the night is over and sunlight reveals its true form, it’s your will to play that’ll have dried to a husk.