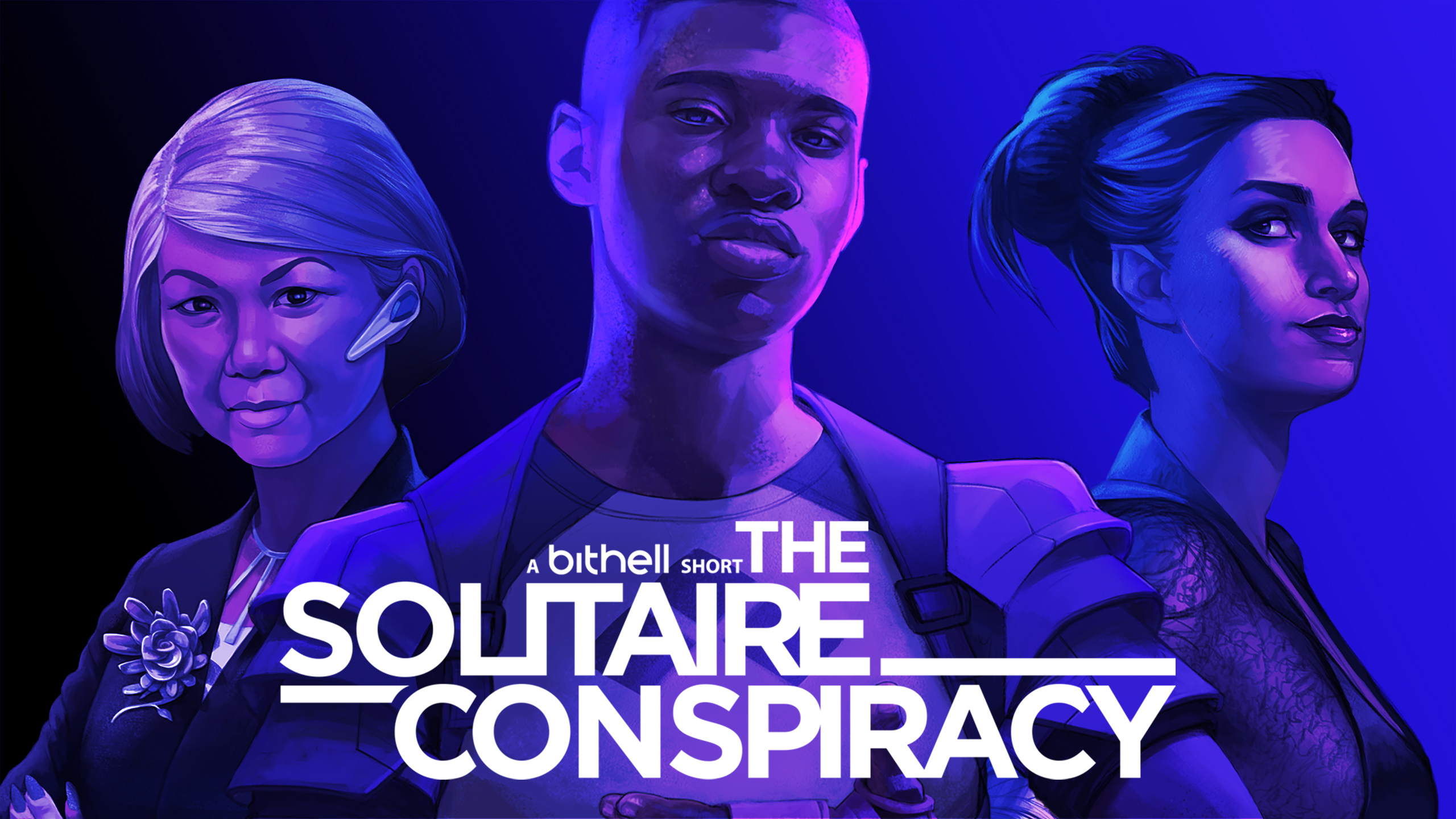 A smart and highly polished take on a classic card game is melded with an FMV narrative in Bithell Games’ latest, The Solitaire Conspiracy. The Finger Guns Review.

A smart and highly polished take on a classic card game is melded with an FMV narrative in Bithell Games’ latest, The Solitaire Conspiracy. The Finger Guns Review.

There’s a pretty high probability that you’ve arrived at this review for The Solitaire Conspiracy because this is Mike Bithell’s latest short game project. I can understand that. The name ‘Bithell’ is becoming synonyms with high quality, well designed and inventive games, if it hasn’t for you already. I think there’s probably a far smaller chance that you’ve come to this review as a hardcore fan of Solitaire video games. It’s a niche after all – but one that’s been quietly growing and evolving on PC for the past few years. This genre now has RPG elements, engrossing narratives and ingenious mechanics that mean that it is completely indistinguishable from the version of Solitaire that many will be familiar with that came free with Windows for years. No matter if you’ve never played a solitaire video game or your Steam library is filled with them, The Solitaire Conspiracy caters to you. It’s pleasingly approachable, has mainstream appeal, is strategically deep and unique for the genre.

The most unique aspect of The Solitaire Conspiracy is that its narrative is delivered via FMV videos. The main Campaign mode begins as you’re introduced to Jim Ratio (played by Kinda Funny’s Greg Miller), your “man in the chair” handler. The spy agency Protego has been attacked by a shady opponent called Solitaire who has locked Jim out of the systems. He has pulled you in from a list of potential recruits as he’s desperate for your help. Using a system called “C.A.R.D.S.”, you’ll be using playing cards in order to move the various Protego crews around on their operations against Solitaire. As you do so, you’ll gain experience and level up. Once you’ve reached level 15, you’ll gain full control of the spy mission systems and Mr Ratio can once again do his job.

The plot here isn’t Shakespearean by any stretch of the imagination. Instead, it feels like a tribute to 90’s spy movies and those games that have leveraged cheesy FMV’s to deliver their story in the past. Greg Miller really channels his inner ‘Tim Curry in Command & Conquer’ at times and honestly, it’s kind of excellent. Miller is joined by Inel Tomlinson around the halfway point in the game who plays a character called Diamond. Tomlinson plays his character much straighter than his co-star and brings a little more edge to the plot. While the narrative telegraphs itself from early on, the FMV’s deliver a fun and light-hearted framing to the card play.

The mechanics of The Solitaire Conspiracy are centered around the Streets and Alleys variation on Beleaguered Castle Solitaire. In the usual version of this game, all 52 cards including the Aces are dealt into 8 piles, 4 stacks of 6 cards and 4 stacks of 7. The game is then played out as per usual, challenging the player to move all of the cards into 4 stacks of cards going from A,2,3,4,5,6,7,8,9,19,J,Q,K. Cards can be moved from the top of their pile but they can’t be put down on another card unless it’s a higher number.

The major difference with The Solitaire Conspiracy is the inclusion of suit based abilities. Gone are diamonds, hearts, clubs and spades to be replaced with symbols which represent 8 different Protego teams. Each team has their own specialisation, background description and excellent art work for each of the royal family, brought to life by the talented artist Jen Pattison (who also did a fantastic job on Ancient Enemy). You play with up to 4 of these teams/suits at any one time and the mixture depends on the tactics you’ll need to use.

You see, once an Ace is uncovered from the stacks and placed in one of the 4 central stots, the Court cards – the Jack, Queen and King – for the related suit activate. They light up and when they’re played on top of another stack, they use their ability. Mantis Group, your first allies, “blow up” a stack of cards, taking each card and distributing it to the top of every other stack. Need a 3 that’s buried under 6 cards? Mantis Group will bring that card to the surface, but it will increase every other stack by 1. Drive Team Six will send the next required card from the suit they’re played on down to the target stack, no matter where that card is. This is the quickest and least consequential way to uncover a card. Play a Blood Legacy face card and that stack will be sorted by value with the lowest at the bottom rising to the highest. While this might sound counterintuitive to the game of Solitaire, if you’re in the need of another suit’s abilities and you want to quickly raise a face card to the surface, this is the quickest way.

Of course, almost every Protego team is a double edged sword. Play a card in the wrong place and you could end making things more difficult or time consuming for yourself. This is what makes The Solitaire Conspiracy one of the deepest and tactically complex Solitaire games available right now. Sure, in the Campaign you can leisurely swap cards around slowly and blindly deal with the consequences if you drop a glowing King in the wrong place but it feels so satisfying when you get it right. Using the Blood Legacy Jack to Bring the Drive Team Six King to the top of a pile, to use that card to retrieve the Ace for the Omega Code suit feels brilliant. The mechanics and rules here serve to enhance Solitaire and make it more interesting and I’ve got to say, when all 8 suits are in the mix, it works a treat.

I’d be lying if I didn’t say there was some dissonance between the game play and story at times in The Solitaire Conspiracy. At the start of each mission (from a choice of 3), you’re served a description of what’s about to happen. These can be dramatic descriptions of operations or deadly scenarios the Protego teams are wading into. And then you play Solitaire. It’s a disconnect that eventually makes sense and helps the narrative reach its end but for much of the game, it seems a tad absurd.

What is absurdly good in The Solitaire Conspiracy is the soundtrack. It’s not hyperbole to say Jon Everist has pulled together a movie quality soundtrack here that would be right at home in the next James Bond or Mission Impossible flick. It has that cyber-espionage edge that complements the game play perfectly. I’ve had the game on in the background while writing this review just for the background music. It’s so good.

Once you’ve progressed far enough into the Campaign, The Solitaire Conspiracy opens up both a Skirmish mode (where you get to choose 4 suits from the 8 and play a single game without the framing) and a Countdown mode. Here you’re challenged with completing waves of solitaire against a timer. Cards placed successfully grant you time and when you’re out of time, your score is added to the leaderboards, both global and for friends. Here, the suit powers and knowing how best to leverage them really come into their own and make speedy solitaire a real joy.

One of the main aspects of The Solitaire Conspiracy that stand it apart from many other solitaire video games is the amount of polish applied. The game is played on a screen in front of the player that has a little movement to it. The screen is backed with squares which ripple like water when you click the mouse. If you’re struggling at any time with the mechanics, simply hovering over a card or the UI elements bring up helpful text boxes which explain things, making the game very accessible. There’s so many little touches that you don’t often find in this genre.

If you’ve never played a solitaire video game, The Solitaire Conspiracy is the perfect gateway into them. Bithell Games have created an accessible yet deeply strategic twist on the classic card game that includes an espionage narrative delivered via FMV’s featuring famous faces. There’s some ludonarrative dissonance between the drama of story told and the relative calmness of the game play but it does little to spoil one of the best this genre has to offer.

The Solitaire Conspiracy is launching on PC (review platform) on October 6th, 2020.