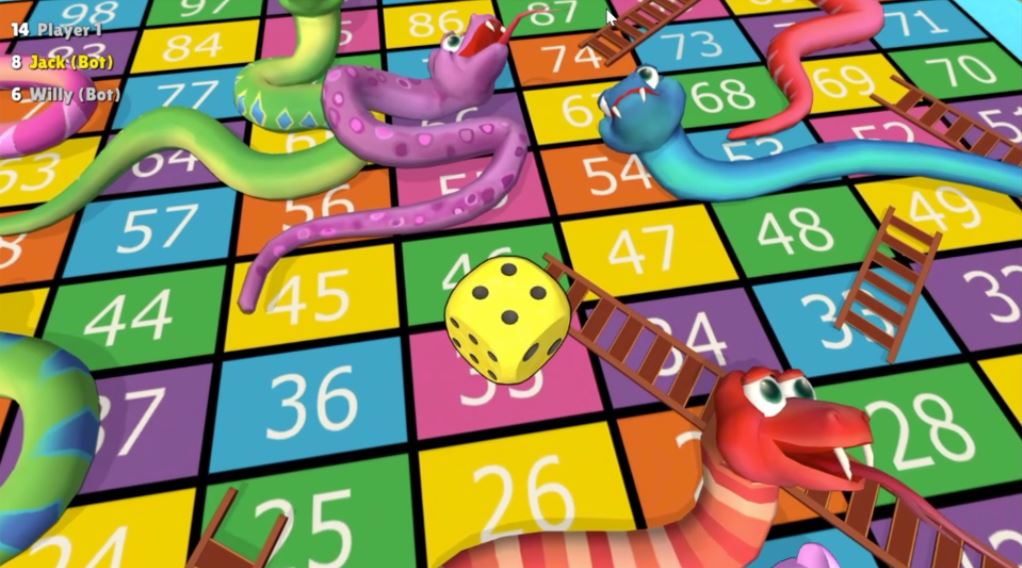 A digital recreation of the timeless board game, Sabec’s Snakes and Ladders on PS4 is exactly as advertised - but it misses the opportunity to do more. The Finger Guns Review.

We already have a real copy of the classic board game Snakes and Ladders in my home. We bought it for £1 out of Pound Stretcher in Wales a few years ago to keep the kids busy on a rainy day in a caravan. Miraculously, having been played with by 5 children, it still has all the pieces. It even gets dug out of the cupboard on the very rare occasion the kids don’t want to play the LEGO Games or Fortnite at home.

Despite the fact that we have actual board games at home, my kids also love to have this penchant for digital versions of the board games we already own. Monopoly, Uno, Chess, Carnival Games, Trivial Pursuit, even the Yu-Gi-Oh card game – they’ve had me buying them all. Of course when they saw a digital version of Snakes and Ladders on the PSN store, they bombarded me with “Daddy, Daddy, Daddy, Pleeeeeeeeeeease can we have this?” and who am I to turn down such polite requests? I’ll be honest, I was a little apprehensive to part with £7.39 (more than 7 x the amount I paid for an actual board game) when I saw that the game was by Sabec, having recently played their “Bowling” title but this game certainly looked better than that – and it is – but it’s a big missed opportunity too.

Snakes and Ladders on PS4 does exactly what you’d expect it to. Set in a virtual child’s bedroom, the 10 x 10 board is presented on a table in front of you. If for whatever reason you’ve never played Snakes and Ladders (or Chutes and Ladders in some countries), it’s a game of pure luck in which you roll a dice then move around the board according to the number you roll. The aim is to be the first to reach the 100th square. Across the board are snakes and ladders which link boxes across the board. If you land at the foot of a ladder, you go up the ladder to the box at its end. If you land on the head of a snake, you slide down the snake to the box with the tail in it. It’s a game that has existed for almost 2000 years and has barely evolved in that time. This version follows those rules but rather than the traditional version that requires you to hit the exact number with a dice roll to reach the 100th square, you just have to roll that number or higher.

This game can be played in 1 player against a CPU, or 2 to 6 human players all using the same controller that you pass around. It’s a shame that it’s not possible to select multiple players as well as AI opponents in one match as I imagine that might have given the game another dimension but it’s impressive the game has 6 player capability to begin with.

In Sabec’s Snakes and Ladders the serpents protrude from the colourful board in 3D. The dice, a 3D cube, can be thrown in any direction in the room so it can land on the board, bounce off the snakes or just be thrown on the floor. No matter where it lands, the face up die number is counted (even when it gets wedged). Rather than having simple counters, you also get to choose a colourful blob then customise its face and head accessories too. There’s an entirely inoffensive background music that could easily double for the phone hold music at a Build-A-Bear store. Land on a snake or ladder and you’re treated to an appropriate sound effect. There’s no denying the child friendly charm this version of Snakes and Ladders has.

When reviewing a digital recreation of a board game, I think it’s important to compare it to the original version. The 3D snakes that protrude off the board are a nice touch and make the board itself far more interesting than any board game version of this I’ve ever played. The ability to throw the dice around and not have to go chasing after it – a regular occurrence with 5 kids and a real world board game while trapped in a Caravan – is also a convenience that’s welcome. It’s not the same as rolling a real dice but it’s still functional.

In terms of enjoyment, playing this digital version of Snakes and Ladders feels exactly like playing a board game. There’s still the same heart break when you land on a snake and still the same elation when rolling the number required to climb those ladders. The dice are fair and winning is still entirely luck based so the game is suitable for everyone; even my 2 year old got into playing this. She had no idea what she was cheering for but she got involved and loved it.

It’s just a shame that this game doesn’t take the opportunity to really explore what a digital version of Snakes and Ladders could be. There’s only 1 type of dice and a single board set up. It could have been really impressive to have different board structures with the snakes and ladders in different places. Similarly, it could have been fun to exploit the dice rolling mechanics to put them into their own game – maybe give the player things to aim for so that they could unlock new cosmetic items for the player blob counters. It could have been interesting to be able to tweak the rules too – I preferred the traditional version I used to play as a child where the winner had to get the exact number required in order to land on 100.

And that’s my main complaint with Sabec’s Snakes and Ladders – they’ve recreated a board game in the literal sense. The game is played out on a virtual board in front of you in a virtual room and I’ve paid more than 7 times what I paid to buy a real world version that I could play anywhere, not just in front of my PS4. Compared to other digital board game recreations, this version does absolutely nothing to make this unique compared to the real world alternative.

Snakes and Ladders on PS4 is a functional, child friendly recreation of the timeless board game. It has a few convenient features which make it easy to play and the board you play on has some 3D snakes which give the game personality. For the asking price though, the real world alternative is much cheaper and just as enjoyable.

There’s no innovation here and the game doesn’t take the opportunity to explore what a digital Snakes and Ladders could evolve the game into.

Snakes and Ladders is available now on PS4 (reviewed on base version) and Nintendo Switch.