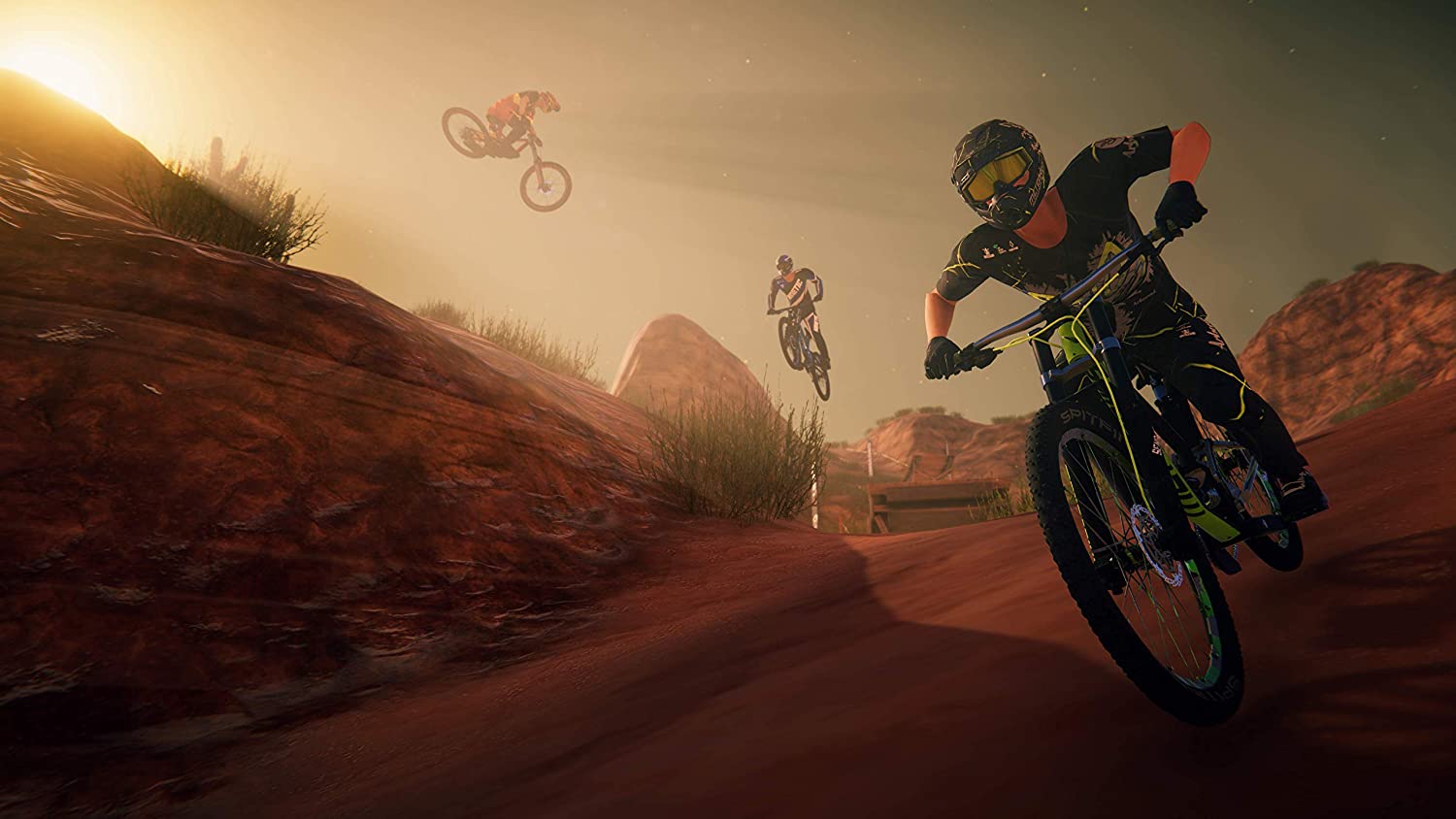 A game that has been out for just over a year on Xbox One is now making its way to the PS4. But how does it hold up? The Finger Guns Review.

Mountain bike games are not that common. Surprising really when all you see on the streets are yoooofs doing wheelies down the High Street. I would have thought there would be more games to reflect the growing trend of Mountain biking.

Anyway, thankfully there is one game that takes biking off the streets and into the wilderness in the shape of Descenders.

So, Descenders puts you in control of a mountain bike and it’s up to you to jump, trick and inevitably crash your way to sponsorships, upgrades, new clothes and other aesthetics until you eventually open up new areas to rip up. It sounds pretty basic, and that’s because it is. This is not like your usual simulations, there is no technical tinkering to be done, and no real-world physics to worry about. This is a pure arcade bike game that has a few nifty tricks up its sleeve to keep things fresh.

The most notable of these tricks is that it has procedurally generated levels so the amount of different courses at your disposal is almost limitless. These courses can range from heavy on the tricks but quiet on the bends or high speed go as fast as you can but with no jumps. Sometimes there isn’t even a track, just a compass marking to follow. Even though the course is based on these set elements, the randomness is quite vast. While the game is loading the tracks, it also generates random, optional challenges for you to complete. However, there are occasions when the challenges and tracks generated don’t match up. For example, the challenge asks you to do two front flips but the course is one that doesn’t have a track so there are no jumps, meaning you can’t complete the task. This is a bigger deal than you might think…

Descenders is a bit of a roguelike at its core. During the career mode, you get an energy bar usually made of three segments. Every time you crash you will lose a segment and if they all go its game over and you have to start your progress over again. However, it’s the optional challenges mentioned above that can refill your energy meter which is why they are quite important rather than a side thought. This energy bar can be problematic thanks to the iffy physics in Descenders. While dashing down a hill at breakneck speeds you can jump, twist, turn, somersault, land backward, land sidewards and generally just stick two fingers up at Newton. You can ride off the track and have no penalty whatsoever (in fact you can do the entire course off the track and not be penalised) but, if you literally just graze a tree with or any of the other obstacles on the track with a single pixel then you will crash. Infuriating isn’t the word, especially when you’re near the end of a zone.

If you manage to work your way through each area, you will need to complete a ‘boss’ jump in order to proceed, As you would expect the locations are varied ranging from lush forests in the Scottish highlands to rocky canyons, snowy mountains, and hell even an active volcano. You really will have to master the tricks and nuances of the controls if you hope to get that far though.

Speaking of controls, this is another favourable trick up Descenders sleeves, initially you think that they are as twitchy as hell (they are) and it’s near impossible to stay in a straight line. But they have this wonderful control scheme that allows you to steer the bike by turning (left stick) and skidding (right stick) once masted you will be slaloming downhill, without even taking your finger off the accelerator. It really is quite something. If anything, it feels like you’re skiing and makes the game so enjoyable… when there aren’t any stunts.

Stunts are an absolute pain though, pulling them off requires some finger dexterity not seen since the Rubik cube. Taps of a button, holding of other buttons, pushing directions all seem counter-intuitive. The bunny hops which is the main launch platform for your stunts is mapped to the right stick, which is also the same stick that makes the steering so great. It should be a button, so there is a clear difference, something you can’t always tell when using an analog stick. Because of this, you don’t get a camera that you can’t control, something that was missing from the Xbox version and is still missing here. This is arguably the worst part of Descenders. Not just in races but when you are in the main hub, there are buildings to enter, a whole area to explore. Only you can’t see it unless you ride around in circles, entering a building to upgrade your rider for example is more hassle than it’s worth. I really can’t understand why developers Ragesquid left a free camera out.

Anyways, the point of all this cycling is to earn reputation, if you get enough you can ride for a team, there are only three in-game teams so the choices are quite limited but each team has a strength, be it corning, jumping, or speed so you can choose the one that suits your play style. If you get enough reputation you can unlock career plus, which is a series of steeper, hard tracks to crash on.

Don’t be fooled by some of the screenshots you see. Descenders isn’t a pretty game. Some of the texture repeating is just so blatant. There are times when the mountains in the background are just an ugly pattern of repeating textures. I think someone must have cut and paste Infinitum. The changes in weather are not so great either with stormy raining tracks just consisting of thick fog making the game reminiscent of an N64 game. But as we all know it’s not about graphics. Audio fairs much better. Descenders feature officially licensed tracks from bands you’ve probably never heard of. Consisting of drum and bass and trip-hoppy tunes, some of which are absolute bangers requiring a quick Shazam (which of course leads to me crashing)

Descenders really is an enigma of game. It’s a bike game that makes you feel like you’re skiing. It has a stunt system that is totally counter-intuitive and yet I can’t stop playing it. At times it looks like a train wreck and at other times it looks beautiful. However, no matter how much I enjoyed ’slaloming’ downhill the collision detection and twitchy controls makes it a game that can only be played in small stints before rage takes over. But then perhaps that’s all you need. There are no races, it’s just you versus gravity so you can take your time and play it your own way. The big downer for me was the lack of penalties for going off track. There is no respawn, or barriers to crash into, so it is possible to complete an area (possibly the entire game) without actually going on the track and doing stunts. I found myself on occasion with just one life bar left, so I just swerved oncoming jumps, so as not to crash and ending my game. I mean I was thankful for this because I’m rubbish at it, but for gamers who want a serious mountain bike game would probably feel a little short-changed.

Descenders is a game that once you get to grips with can be a lot of fun, unfortunately, it probably has one too many flaws for it to be considered great.

Descenders is available on PS4 (reviewed on a PS4 Pro), Xbox One, Nintendo Switch and PC on August 20th, 2020.