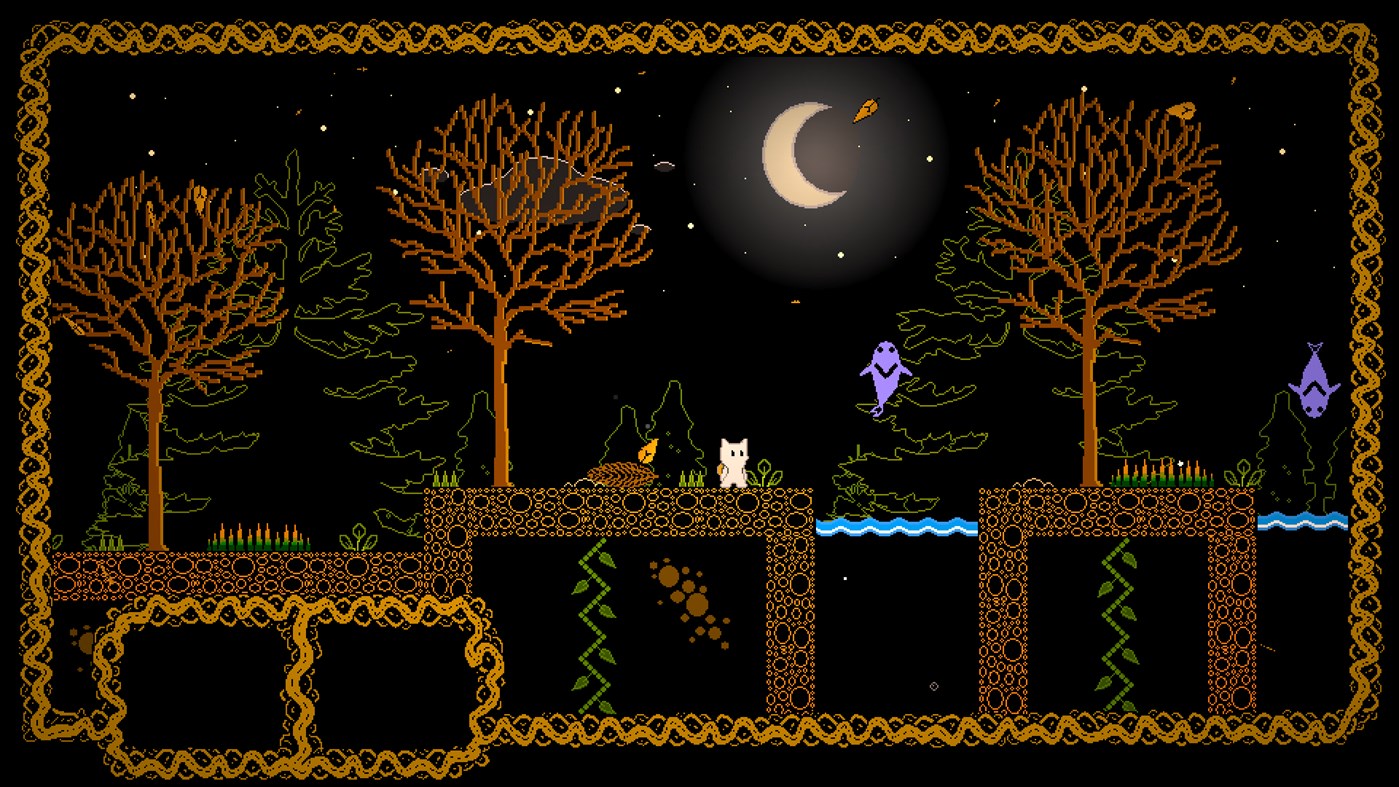 A retro inspired platformer with an interesting art style, The Explorer of Night is equal parts frustrating and pleasantly challenging. The Finger Guns Review.

The baby cat is sick. Mortally so. The family knows it won’t survive till the morning without the power of a magic flower that can only be found deep in the forest. In steps “The Explorer of Night”, one of the cat family members who’s off to take on traps, hostile animals, bandit kittens and more in order to find the flower. A premise that’s a little more emotionally manipulative than most, this is the window dressing to a game that’ll have you twitching with excitement one moment then pulling your hair out the next.

The Explorer of Night is a minimalistic 2D retro-inspired platformer that harks back to the days of Mega Man and James Pond. The cat character that the player is in control of here has no special abilities to use. They can run, jump, climb ladders or vines, crouch and throw objects. The aim of all of the levels in this game is to get from the entrance to the exit side of the level. Standing in the way are spike pits, bomb traps, creepy spiders, dangerous birds, porcupines and a team of other cats that seem to be ransacking the forest.

There’s no health in The Explorer of Night – stumble into any of the dangers and you’ll explode and die instantly – which makes overcoming these obstacles quite tense and exciting. Don’t worry though – this isn’t as old school punishing as it appears. Die and you’ll be sent back to the start of the level rather than the start of the game. Levels vary in length and the further you progress into the game, the longer, more difficult and more complex the levels become.

The majority of The Explorer of Night involves platforming elements that you’ll have seen at least 3 dozen times over the past decade. Moving platforms, spikes, enemies that move until they get close and then become an obstacle to vault over. New elements are added to the mix the further you progress into the game. Projectile firing enemies that’ll have you leaping over arrows or pushing blocks to block their path. Using dynamite to destroy blocks barring the path. While the elements of the game are traditional and rote, the way they’re put together demands pinpoint accuracy and perfect timing. Some of the later levels have you bouncing on spring/mushrooms that are moving slowly over a spike pit while avoiding projectiles fired towards you. It’s enough to give you sweaty hands. In other levels, you’ll have to avoid birds which swoop out trees to attack. Slow down at all and they will catch you. It’s the kind of tense, twitchy platformer game play that’ll have your feet moving, controller lifting a head bobbing as you play.

Sometimes this game play steps over the line of enjoyment and becomes deeply frustrating, mostly when an element of luck is involved. In part of the game you’re sailing on a 2D boat down a river and have to get off at several points in order to clear some branches that have blocked the way forward. In the water below patrols a large fish that will jump up and kill if you get too close. This fish doesn’t follow a particular route, and can turn and leap at you even if it’s swimming away. Because it’s impossible to predict, it turns a challenging level into a 30+ death cycle that might make you want to throw your controller. The only way I cleared this level was by accidentally blowing the fish up with dynamite. In another example, a level in a cave that limits the distance you can see to a tight circle around the cat is enjoyable until it tests the player to traverse a number of stalactites that’ll fall a few seconds after being touched. This would have been difficult knowing where you’re heading next but having your vision restricted just makes it far more frustrating.

None of this is helped by the art style of The Explorer of Night. It’s quite a unique look and is certainly easy on the eye. It’s a style that makes brilliant use of black space with bold solid colour outlines that gives it a real night time feel, like the classic Ghosts ‘n’ Ghouls. The issue with this is that there’s next to nothing that distinguishes between background images and scenery and the foreground interactive elements. World building elements which I would usually consider to be a nice touch are so prominent that they’re distracting – I spent a third of the game avoiding bat like “enemies”, accidentally sending the cat to its death a number of times, despite these bat’s not being “enemies” at all. They’re simply scene setting objects that move around when you get close. I only discovered they couldn’t kill me by accidentally jumping into one then landing safely. I audibly said “oh”. And why wouldn’t I avoid them? They’re bigger and more menacing than half of the actual dangers in the game.

The same sentiment can be laid at the feet of some of the static world objects too. In the first few levels there’s a lot of zigzagging vines that are simply part of the environment. Suddenly and without warning, a similar vine is added as a foreground game play object that’s climbable. It’s part of a series of jumps I failed at least 10 times because the jump is entirely manageable without the vine, but as you pass through it, it changes your trajectory. It would have made for a much more pleasant experience if the vine was distinctive from the scene setting objects or introduced earlier. And then there are tiny spikes, shorter than half of the grass-like objects in the game. There’s nothing more frustrating than finally completing a really challenging series of jumps to simply walk into a spike randomly placed on the floor, almost hidden from view. It sometimes feels like The Explorer of Night is purposefully trying to trip you up.

There’s some very light puzzle solving to do in this game and, honestly, they do little to elevate the experience. An example is having the way forward blocked by a spider web and having to figure out how to get a projectile object up to the web in order to destroy it. The solution to these is almost always to simply find the right platform in which to throw the projectile from.

I feel like I need to mention the inventory boxes too. Items don’t really become part of the game play in The Explorer of Night until its second half and even then, you’re not collecting myriad pick-ups. To have 2 huge distraction inventory boxes on screen for the whole game feels like an odd design choice when something small and much more subtle would have done the job just as well.

There’s a hand full of set piece levels and 3 boss battles in The Explorer of Night which are the highlight of this game. In one level, you’re pulling an Indiana Jones and trying to escape a boulder that’s chasing you through a series of platform sections. In another, water steadily rises and falls, exposing then submersing the path forward, requiring some forward planning and expert timing. The boss fights are a little too reliant on luck – items spawn that you’ll have to use in order to damage the boss but the rate at which they spawn can feel totally random, especially during a giant spider boss – but they’re still a decent test that combines all of the mechanics that the game has introduced thus far.

I need to mention the soundtrack for The Explorer of Night. It’s excellent and a stand out aspect of the game. While the game play is mostly silent aside from 8/16 bit sound effects for jumps and deaths, the soundtrack is beautiful in comparison. Gentle, offkey piano melodies set an eerie tone and it often reminded me of the soundtrack to the original Resident Evil.

And before you know it, The Explorer of Night will end. Depending on your patience and skill level, there’s between 4-7 hours of content. For me, a lot of that time was spent replaying a hand full of levels that were particularly tricky or intentionally there to make you stumble. There is no real replayability for this game.

Throw a rock in the games industry and you’ll hit a tonne of retro inspired platformers akin to The Explorer of Night. Some of these will be pushing the genre forward while others want to relish in the nostalgia of the past. This game sits in the latter camp, revelling in that twitchy, platformer action from the 80’s but brings with it some of the frustrations that many of its peers have done away with. For the small asking price, those who long for the days of challenging platformers with chunky pixel visuals will find a few afternoon’s worth of entertainment here. Compared to the likes of Dead Cells or Celeste, this game feels distinctly average.

Bringing nothing new to the table, suffering with some frustrating sections and with an art style that’s nice to look but can make the game hard to read, The Explorer of Night is a retro inspired platformer that’ll scratch that twitchy platformer itch for a day or so – but no longer.

The Explorer of Night is available now on PC and Xbox One (review platform).