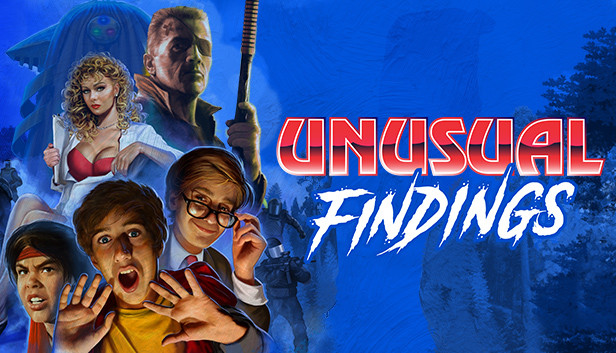 Three friends uncover a mysterious going on in the neighbourhood. Travel back to the 80's in Unusual Findings. The Finger Guns review:

After being really slow on the uptake, I have only recently started and finished Stranger Things. I binged it in about a week. I am yet to watch the finale of season 4, but for me that just means it’s not over until I say it’s over. Why am I saying this? I don’t think I would have a chance at reviewing Unusual Findings without mentioning Stranger Things or it might have been a crime. Even the theme song for Unusual Findings sounds like the latter’s intro song.

Unusual Findings follows the premise of Stranger… the adventures of Vinny, Nick and Tony, uncovering a mysterious meteor crash. The game’s story opens with the boys being grounded for accidentally blowing up their neighbour’s front garden. Instead of staying in and obeying the parents’ orders, they sneak out to try and watch adult films (together? I’m not here to judge, it’s the 80’s after all). Whilst trying to finalise the adjustments to get the channel to work the TV is interrupted by what looks to be a distress call followed by an explosive landing the boys see out the window.

Like any inquisitive, already grounded teens, they go and investigate. This investigation comes to a head when they come face to face with an alien that mysteriously disappears. Of course, this is the 80’s, a decade in which kids just dealt with their own problems. Why bother telling the police? Where’s the fun in that when 3 kids can work it out themselves, right?

Unusual Findings is a point and click adventure oozing with era appropriate pixel graphics and 80’s references. You assume control of the character Vinny, taking on his dialogue options as well as choosing what he can interact with. The game is very tongue in cheek about actions having consequences, which always equally excites me and worries me of my future self having choice paralysis.

As the player you can pretty much click on anything and something will be said, working as impressive world building. As a player you’ll have options to look at, talk to, or grab. When talking to people you will have the option to look at them, talk to them or punch them. I found this intriguing and you would guess correctly if you think I tried to punch everyone I came across. I am yet to be able to punch someone but when I do, I think it’ll be great.

Similar to other point and click adventures, Vinny has a duffle bag to keep all the things you find along the way that are going to be useful, one way or another. Players will have to drag and drop items to the corresponding person, room, or item and Vinny will soon let you know if it was worth it. Something that is a chuckle all the way through is getting Vinny to talk to almost anything, which he will comment upon.

As the story unfolds, you will need to travel to many different locations speaking to as many people as you can to either fulfil tasks for them or get them on board to help you find and defeat the alien. You eventually come up with a plan to do this yourselves whilst the game revolves around trying to hatch your plan successfully.

There are many different locations to go and explore with a plethora of 80’s references. From forests, to lover’s lookouts, to VHS and comic book shops and many neighbourhoods. There is even Hawkins Laboratory a very well guarded security facility to explore. There are many Easter Eggs and references to the beloved decade for anyone to enjoy. I wasn’t born in the 80’s but can still notice the bloodstream of nostalgia running through Unusual Findings.

The 16 bit inspired visuals work well with the synth-y rhythms of mystery and enigmas of the game.

There is one major snag I had with Unusual Findings, and it is the feeling of it being unpolished in certain areas. I have spent more of my time trawling through every location, clicking on every possible thing, using everything I have in my inventory on everything to match up with something, than I feel I have playing the game through in a succinct fashion. At one point I admittedly reached out to the dev’s to check out If I was losing my mind. In fairness, the member I spoke to at Epic Llama were so gracious and lovely and a team I will never hesitate to approach again if needed.

There is also a magnifying glass which 99% gives you the description of the object. For example, if you pick up some salt, the magnifying glass will say “It is regular table salt”. It was suggested that there could be a lot of hints here. So I’ve made it a bit of a biblical task to check each description often to remind myself if there is something that will guide me to the next task. Only once has there been something that has been of use and even the script won’t hint towards this. So you may end up like me, randomly clicking everything and mashing things together. It is a shame because when you actually figure something out there is this big hit of serotonin, but it might be followed by more feeling around in the dark for a long period of time. Some puzzles lack logic, signposting, and intuitive design despite being interesting among the story. It isn’t about making it completely obvious or spelling it out, but even references in the script would be helpful.

Additionally, a lot of the decisions that ‘have consequences’ are quite obvious that they are going to have some sort of impact. That is because you as the character will choose your reply to a handful of conversations. The majority, or at least the majority of what I’ve played, are stock conversations. Meaning there is no choice, you will say these things every time to them or be given the choice to ask the same questions every time. You mostly won’t get a chance to reply uniquely. It feels as if there was a big emphasis on your attitude being important that kind of got forgotten in the main part of the game. There are but a handful of places I have come across this unique consequence in attitude, yet the game set this up in the very first dialogue that this will be a major component throughout the game.

If your worried you may miss out on clicking things, there is a feature that allows interactive items to be momentarily highlighted (in the form of a space invader!) which I was actually very grateful for.

Although this game is interesting and is filled with lots of retro references fun mini games, Star Wars and video game references, it feels unfocused with a lot to do and remember at once. The story is a lot of fun and takes an unexpected turn which did make me want to keep going. I can’t quite work out if the game is longer than I expected because I was walking around a lot trying to figure out some of the clues, or because this game is just quite bigger than I expected, but it will certainly set you back a few hours even if you thorough.

Unusual Findings is bursting with pop culture references, visuals and sounds from the 80’s. The adventures of Vinnie, Nick and Tony has obviously been inspired by Stranger Things and that works for it. While it’s enjoyable overall, it lacks direction and logical signposting in some areas which can make it tedious.

Unusual Findings is available from October 12th, 2022 on PlayStation 4 & 5 (reviewed on latter), Xbox One and Series S|X, Nintendo Switch and PC via Steam.

Make sure to follow Finger Guns on our social channels. Twitter, Facebook, Twitch, Spotify or Apple Podcasts – to keep up to date on our news, reviews and features