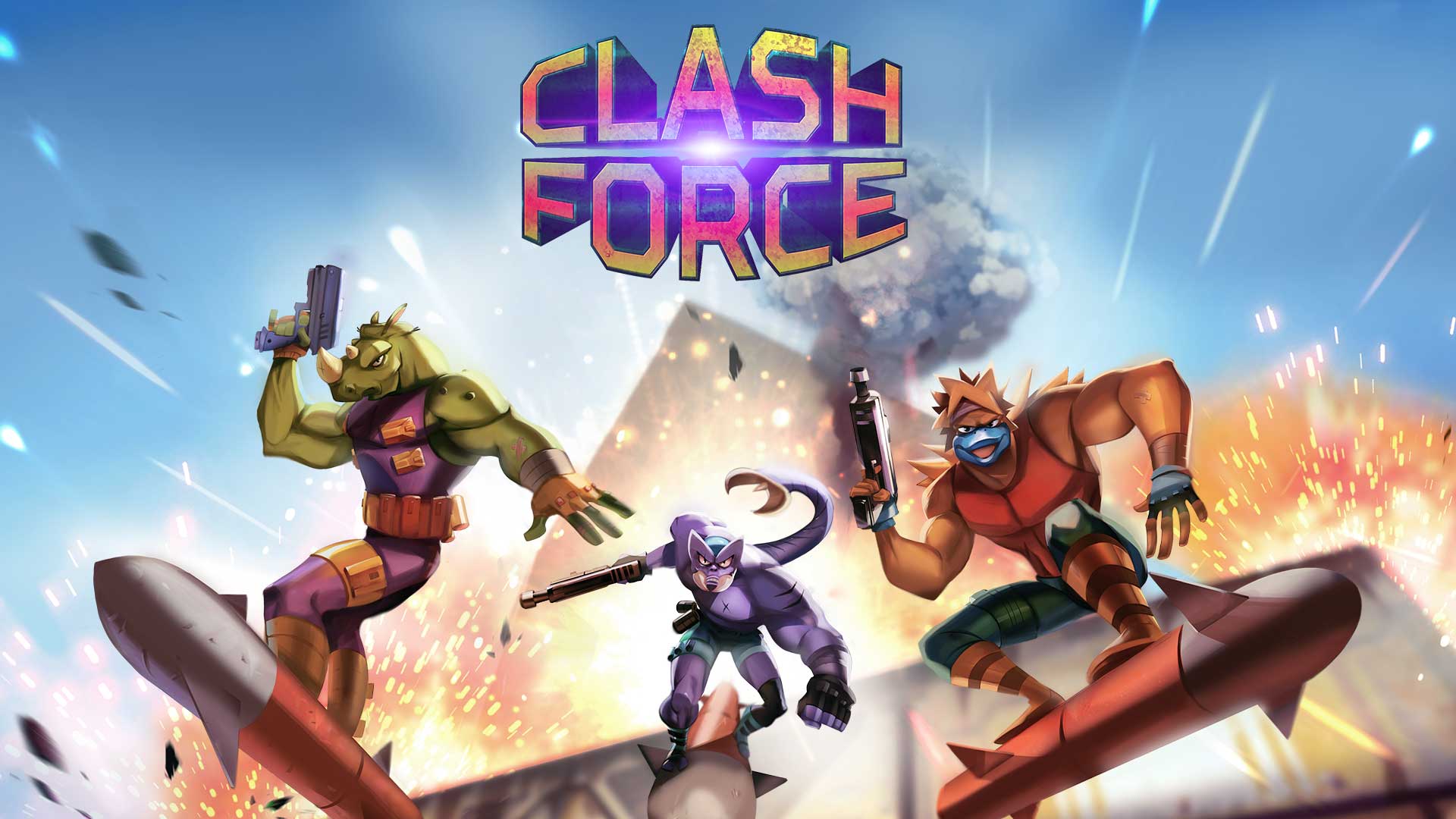 Inspired by the NES run and gun classics, Clash Force doesn't manage to reach the levels of its muses. The Finger Guns Review.

Another day, another retro inspired game that’s trying to recreate the magic that some games had 20 years ago. This time it’s Clash Force, a run and gun platformer that wears its NES shooter inspirations like Mega Man on its sleeve. Unfortunately, some questionable design decisions and a few dull boss battles mean that Clash Force never gets close to the games its trying to emulate.

A villain called Crackman (no, seriously) and his army of robotic minions are attacking and the only team who can stop him are the Clash Force. A trio of gun toting anthropomorphic characters – Voom a rhino, Scorpido a scorpion and Echid an echidna – they set off to stop Crackman. The differences with each Clash Force team member is purely cosmetic. There’s no difference in the way any of the trio play.

Clash Force is a traditional 2D platforming run and gunner. Each level is set from left to right and you move along, shooting down everything in your path in order to reach the exit door. You have 3 heart’s which represent your health and when you lose all 3 or fall into an instant death pit, it’s back to the start of the current mission. The trio of heroes can jump higher the longer you hold down the jump button and they can only fire forward – there’s no 8-directional fire here. Just left and right. As you progress, you can collect power up’s which change your weapon from a single shot into multiple shots from 2 to 5 blasts. These power-up’s are lost when you take damage. There’s also shields which prevent one damage dealing hit to your Clash Force operative.

In order to defeat Crackman, you’ll need to take you Clash Force fighter through several biomes across 21 levels including 6 boss battles. Each location – Forest, Underground, Fortress, Desert and finally Crackman’s flying base – has a different visual aesthetic and introduces new enemy types to fight against. An impressive element of this structure is that not only does each biome have its own visual look, each level within that area also has subtle differences. This is complemented by a brilliant soundtrack that has the same feel as being from the NES chiptune era but is modernised with far more range and instruments. The soundtrack matches each location incredibly well putting a subtle twist on the stereotypical tunes from the location. For example, the Desert track has a guitar riff you’d expect to hear in any Wild West flick but it’s sped up and backed by a synth track full of pomp and circumstance.

It’s the design of Clash Force that’s a little lacklustre. The game is only a few hours long and aside from some of the later boss battles and a handful of set piece levels – a level in the desert that has you travel on a raft and a moving platform level Underground being the most impressive – Clash Force feels mundane and far too simple. It’s missing those tense moments that would have your feet twitching and butt clenching from the Mega Man games. This is partly because of the structure of the game – only having to complete one level at a time and death just means restarting that level which encourages repetition – and partly because the game is so forgiving. For example, it’s possible to cheese through the first 2 boss battles of the game by standing in a single spot and pressing the fire button when Crackman lowers himself to your area. The late game certainly makes up for the early trudge but the real test is whether your patience will last that long.

It’s hard not to admire the goal of Clash Force. Releasing a Mega Man inspired shooter in 2020, even sticking to the 4:3 aspect ratio and adorning the wide screen sides with images of the main characters, is bold. This game is obviously a labour of love for Spicy Gyro Games. That said, compared to it’s peers in an era when we have retro inspired titles that are actually pushing the genre forward, it doesn’t do enough to look anything other than a pale imitation of the original’s its trying to emulate.