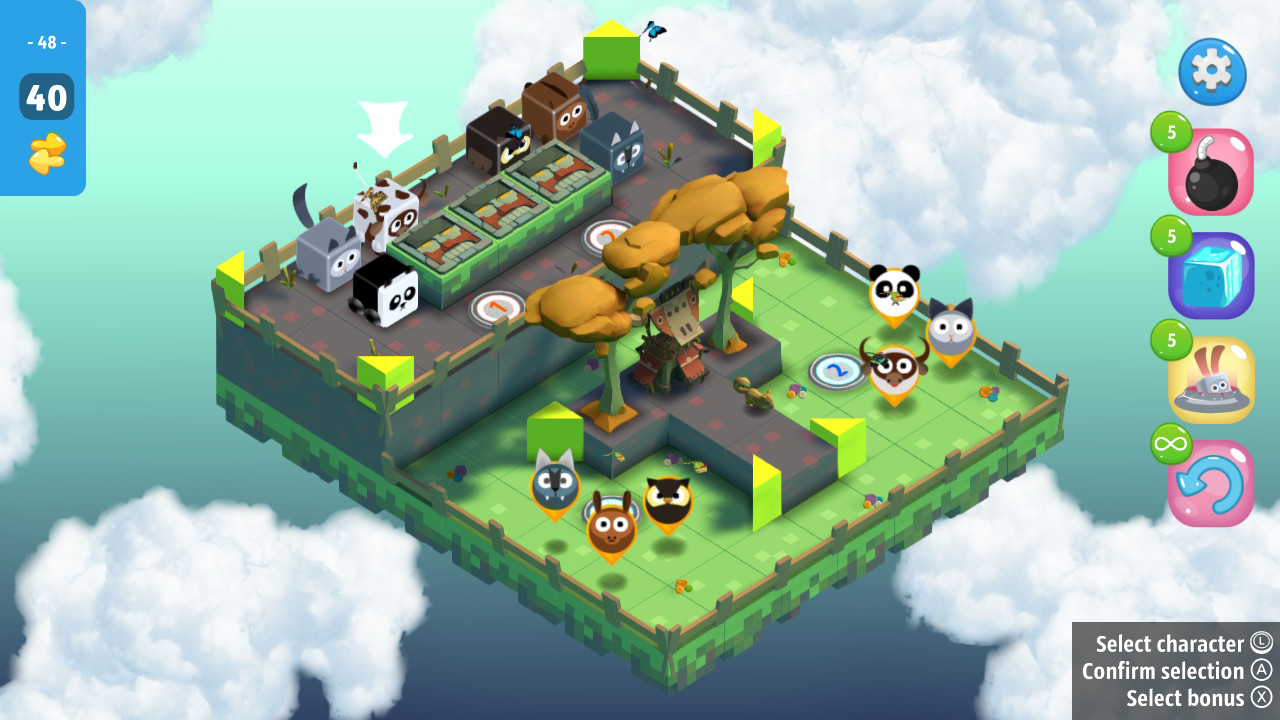 A classic puzzle gets cutesy and overdone in Cubicity for the Nintendo Switch. The Finger Guns Review.

While it’s only just arriving on Nintendo Switch, Cubicity has been around on PC for more than a year already. It’s the latest PC game to take advantage of the indie friendly Nintendo Store. If you’re an owner of the PC version of the game, there’s nothing new here. The UI has been updated, the visuals have been brightened up and simplified for the Switch and the difficulty has been ramped right down. If you’re new to Cubicity, well, let’s get into it…

Cubicity is a puzzle game set in a blocky, voxel-esque world. The aim of this game’s 90+ levels is to move animals in their diorama from their starting positions into the target squares with their corresponding images above. To do so, you’ve got some rules to follow; each animal can only move in one direction per turn and they’ll continue in a straight line until they hit another animal or a part of the level scenery. You’ve only got a set number of turns to take in order to get all the animals in place. The core puzzle is one you might have seen in any number of other games – usually as a sliding block puzzle on ice or something similar – as a mini-game. Cubicity is a game built around this concept.

Like any good puzzler, Cubicity adds new mechanics and depth as you progress. Initially, it’s as simple as moving the animals to their correct place in the right order. With a little forethought and experimentation, these levels are simple. Soon enough, new mechanics are added – lifts which will take an animal to another elevation, corner walls which send animals forward in a 90 degree direction from the angle they approach and direction arrows which turn an animal if they’re crossed in the correct way. As each mechanic is added, the game throws a few softballs so the player can get used to them and then they’re joined by the previous puzzle elements in slightly more complex, mildly more taxing puzzles. Sometimes there’s one solution. On other occasions, there’s a number of ways to crack a level.

Unfortunately, by half way through the game, repetition really starts to set in as you’ll have seen everything Cubicity has to throw at you. The puzzles just get larger and longer rather than any more enjoyable. This isn’t helped by the fact that this game doesn’t offer any real reward for completing the puzzles in fewer moves. There’s a ranking system for each level – from 1 to 3 stars – but this doesn’t really do anything. There’s a bit of an issue here too – one of the UI changes from the PC version to this Switch version is the removal of the on-screen display of how many moves you need to use in order to earn 1, 2 or 3 stars. Instead, you’ve got just a number of moves and a number above it that acts like a par.

The main issue with Cubicity is that it’s far, far too easy. This is due to 2 elements – tools and unlockable characters with bonus’. The tools, unlocked via progress like the puzzle mechanics, are a way to make each puzzle earlier. You get at least 5 of each of these to use per level. Ice blocks which act like a wall but will shatter once an animal bumps into it once, bombs which will knock an animal a single block in the opposite direction, portals which take an animal from one space to another and an undo feature that will allow you to walk back any mistakes – when used properly, these can make any of the 90+ levels in the game an absolute doddle. They’re optional, but in the same vein, there’s no restriction on them either. You don’t have to win these tools by solving other puzzles. They simply seem like a hangover from a time that Cubicity probably had some kind of pay-to-win mechanic.

The second reason Cubicity fails to mount any kind of cerebral challenge is the unlockable characters and animals. As you play, you’re rewarded with coins. These coins can be used to buy new animals that get added to the mix and will be chosen randomly for each level. Within the first 30 levels, it’s possible to earn enough of these coins to buy all of the available animals. Some of these animals offer passive bonuses to game play; the horse grants you +3 moves for any puzzle it’s randomly chosen for and many of the bird characters can fly over gaps in the level. Having all of these animals and characters unlocked makes the puzzle difficulty even less impressive.

Visually, Cubicity has taken a little step back from the PC version released last year. This wasn’t a very visually intensive game to begin with but this new version is flatter and with more solid colours. The visual downgrade can make it a little hard to see which animal goes where when in handheld mode, especially when you’re got multiple animals in play that’re the same colour – the bear, the horse and the dog are all a very similar brown, for example.

If you like those slide puzzle mini-games you find in many other games, Cubicity is a cutesy, leisurely game built around that core concept. There’s 6 to 8 hours of content in this original package with the hint of more to come later but in less than half of that time, you’ll have seen everything this game has to offer. It’s easy  – far too easy for my taste as it becomes boring quickly – but this is a comfortable way to kill an hour or 2 before the monotony sets in.