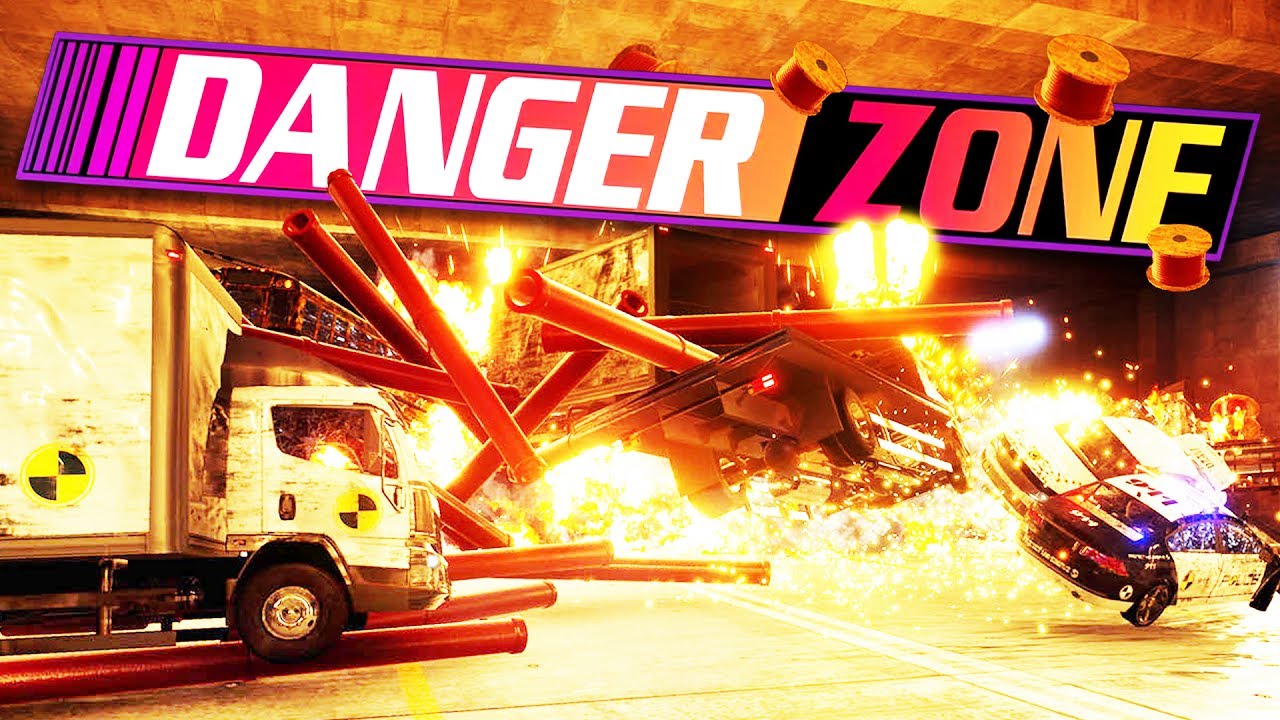 Danger Zone is exactly what you want it to be…nothing more, nothing less.

Danger Zone is exactly what you want it to be…nothing more, nothing less.

There we were, me and my mates huddled around my Mum’s big-at-the-time TV, original Xbox hooked up and four of those enormous OG Xbox controllers in our hands. As I turned on the console and inserted the glorious Burnout 3: Takedown. We tore it through level after level but then discovered…Crash Mode. That night, none of us got any sleep.

It was obscenely addictive, so much so that the racing modes became obsolete. I very rarely touched them again, obsessed with attempting to get higher crash scores over and over. I wanted to destroy trucks and cars and make my friends sit aghast at my noble, inhuman ability for unquestionable destruction. In Crash Mode, I was a God. Everyone else who dare attempted to beat my scores fell at the gates one by one. They were not worthy of me. I racked up Crashbreakers like they were phone numbers of all the girls my pitiful friends fancied. It was hilarious.

Nowadays, I suck at Burnout and have quite honestly well…burnt out on the whole franchise after the somewhat disappointing Burnout Paradise. Of course, it seemed Criterion were in the same boat as we never saw an entry in the franchise again after that – let’s not talk about that mobile iteration eh -. It’s a shame, I’d day one purchase another Burnout tomorrow if it meant going back to basics.

Lo and behold…Danger Zone appeared in my inbox and all of sudden, everything was right with the world again. Well, sort of.

Three Fields Entertainment, made up of Criterion founders, no doubt have an affinity for Crash Mode. It’s well documented it was a hugely popular portion of the Burnout series and as such, have now released a game which is literally just Crash Mode and absolutely nothing more. Give the people what they want, and all that. They nearly achieved it with Dangerous Golf, which was fun and shared similar gameplay aesthetics but whilst playing you always knew there was something under the surface that we wanted which wasn’t quite it. Danger Zone is what that is.

For those of you unaware of the wonders that Crash Mode provided us old folk in the prime of our youth, allow me to explain. Essentially, you take control of a car and you must drive it into a junction full of different vehicles to cause an enormous collision. The more destruction you cause, the more explosive you can be with your car via Crashbreakers (or Smashbreakers..as they’re named here). Your ultimate aim is to cause as much carnage as possible whilst your car is moving (you can control your destroyed vehicle during Smashbreakers to attack static vehicles that may have missed the initial blast). The higher cost of the damage you’ve caused, the higher your score will be. You can add to this final score by picking up Bronze, Silver or Gold tokens scattered across the junction, other tokens will allow you to add extra Smashbreakers in case you’ve missed any wanton destruction.

There’s, quite literally, not a whole lot else to Danger Zone. You have 20 stages or so and you can’t progress to the next until you get a medal on each stage, so be prepared for replaying levels a few times over and over to clear each one. There is a certain amount of replayability in wanting to get a Gold medal in each course but that will take knowledge and repetition of each stage in order to learn where and when you need to start piling into traffic in each segment. The stages do get progressively more difficult, so if you want to go for those Gold medals be prepared to put the work in.

Danger Zone, to its credit, feels fantastic. It took me right back to those late night sleepovers, but instead of being surrounded by my friends I have my girlfriend staring at me and wondering if I actually want to attempt this in real life, the same way she does when I accidently kill pedestrians in open world games.

At the end of each stage you see the world leaderboard and where you rank. On earlier levels I found myself in the Top 10 at one point. Granted, I had just downloaded the game at midnight so there probably weren’t many others playing. I dread to think were I am now as I write this.

What else does Danger Zone have to offer? Well, nothing. This is a full release based on a single mode of a game so there’s pretty much nothing here go do other than to keep attacking those leaderboards. Is there anything wrong with that? Well, no..not as such. The game is exactly what it says on the tin and offers nothing more for your money, which at £9.99 / $12.99 is difficult to sniff at, but perhaps a little bit of variety in the visuals, the game takes place in a kind of simulation factory and each stage has the exact same palette. It seems the entire goal with Danger Zone was to get Crash Mode into the hands of new players and once that was accomplished…well, job done.

What about the music? Well…there is none. So there’s that.

Danger Zone probably does have something for new players but it’s up to you if what it offers is enough. For those out there who are obsessed with getting to the top of leaderboards and getting better and better scores than this is going to absolutely keep you occupied. Gold medals are tough as balls to get on later levels so it’s not like the game doesn’t offer any kind of challenge, because it really does.

For those of us who spent countless hours playing Crash Mode in Burnout, Danger Zone will scratch that particular itch with aplomb. It would have been nice to see a little more variety in the presentation and have maybe a smidgen of music to soundtrack the carnage, but that would probably go against exactly what Danger Zone is.

This is Crash Mode from Burnout in 2017 for less than a tenner.

Nothing more, nothing less.

Disclaimer: In order to complete this review, we purchased a copy of the game. For more information on how we review and score games, please see our review policy.