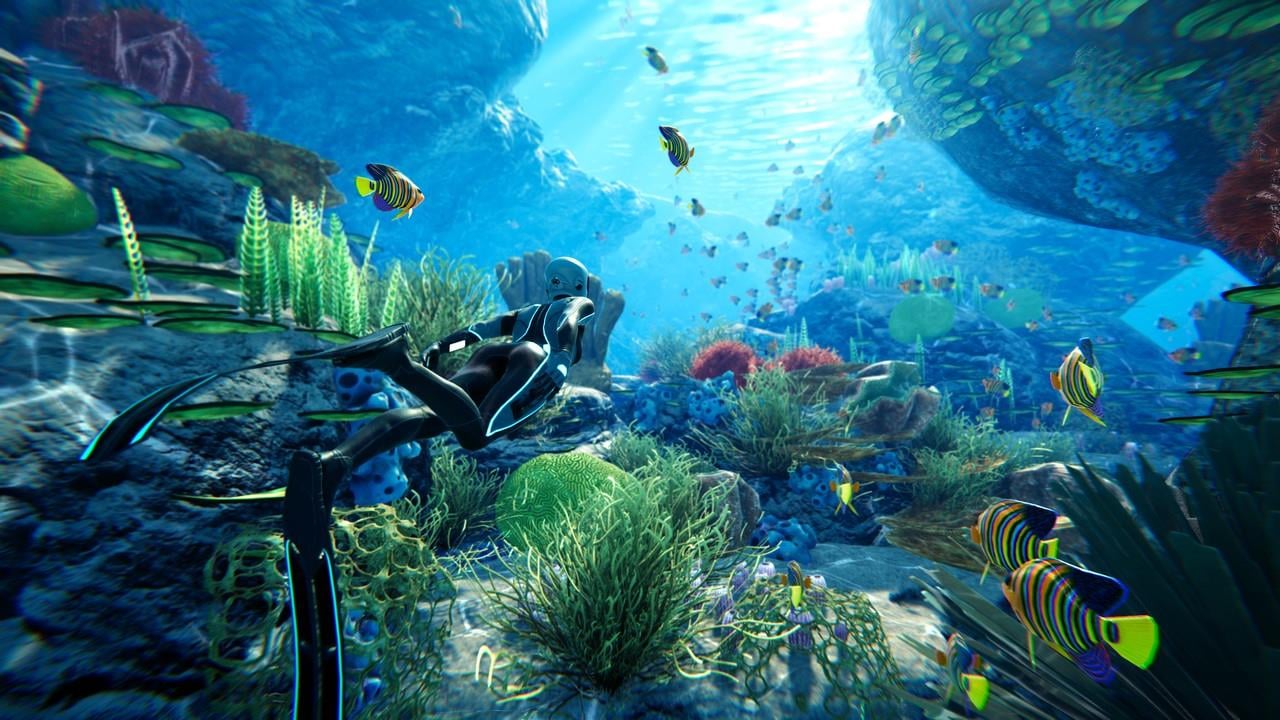 An aquatic adventure that tells a powerful story, carries an important message and teaches as well as entertains, Beyond Blue is an excellent game. The Finger Guns Review.

I’ve been waiting for a game like Beyond Blue to arrive for what feels like my entire life. When I’m not playing games, I like nothing more than to watch a nature documentary as the commentary of David Attenborough fills my head with facts I’ll likely only ever need during a pub quiz. Beyond Blue combines these 2 hobbies with a traditional video game that aims to educate as much as entertain. There have been titles like this before – Afrika and Aquanaut’s Holiday (which only released in the East and the English/Chinese version can’t be bought for less than £300) – but none have been as in depth or as important as Beyond Blue.

Beyond Blue is set in the near future. You play as scientist and diver Mirai who fell in love with Whales and has dedicated her life to studying them. Inhabiting a 1-man submarine, Mirai is exploring the ocean and following a pod of Sperm Whales to analyse their lives. In the game, nature documentaries have evolved and there’s now OceanX live streams direct from the sea. Mirai is the host but is backed up by a pair of scientists Andre and Irina who help her navigate the ocean. What she uncovers is worrying and painfully real.

Beyond Blue isn’t the most mechanically complex game but its narrative, educational elements and visuals more than makes up for it’s more pedestrian issues. Structurally, Beyond Blue is a collection of open world oceanic areas that you’re free to swim around and explore at your own pace. The game’s structure is really traditional and little more than moving between waypoints on a map with objectives to complete when you reach each one. Buoy’s act as waypoint identifying towers – interact with one and you can look around the 360 degree horizon looking for places of interest to tag. Once you’re identified, they become a waypoint on the map to travel too.

Between these waypoints, it’s not just the scenery to take in. A secondary objective is to scan the myriad of aquatic animals that inhabit these environments. Train a circle reticle on them and hold down the R1 button and you’ll scan them. Each fish, whale, dolphin and everything else under the sea that you scan is added to a digital collection, the recreation’s of which you can pour over between dives. As you scan more of the same species, behavioural data is added to the database to peruse too.

At each of the waypoints in Beyond Blue is an activity. It’s here that you really get to interact and observe the digital wildlife. Playing with dolphins, watching a baby whale nustle with her aunts, getting inked by an Octopus, watching a leatherback turtle chow down on a moon jellyfish and much more. Sometimes you send out an aquatic drone which allows you to scan animals closely and record their songs. Through conversations with Andre and Irina, you’ll pick up all kinds of facts while playing. Did you know that Whales breastfeed their young? I didn’t. I do now. Did you know that only male humpback Whales sing? And the current scientific thinking is that it’s some kind of mating display? This game is a fountain of knowledge.

Beyond Blue is a fact filled experience as it is made in conjunction with Ocean X and BBC Studios, responsible for the Blue Planet II documentary. Throughout the game, animals act like they do in the wild because of this connection. White Tip Reef sharks lie in groups on rocky outcrops. Initially it looks like a glitch, like they all statically spawned on top of one another but this is how they act in real life. Watching orcas, sharks, whales and dolphins, all of whom are natural competitors in the ocean, work together around a bait ball is fascinating and is something recreated here in stunning fashion. The deeper into the ocean you travel, the darker the game gets and the more exotic the animals become. While exploring the midnight zone, you’ll see some truly wonderous things and even catch footage of a species that’s so elusive that until 15 years ago, hadn’t been seen on film at all.

The vast majority of Beyond Blue is gorgeous. The oceanic worlds are highly detailed and the effects in the game really make it look like you’re moving through water. The models for the animals are stunning and life like. The animations of each one of these models is equally stunning. There’s a few awkward sections when you’ll see fish swim through walls and there’s a really odd visual effect above a brine pool that combines with the darkness of that area to make the screen almost unreadable. These are small moments in an otherwise beautiful game.

The most beautiful aspect of Beyond Blue is the story however. To describe its finer moments would be to ruin it and that would be a crying shame. Instead, I’ll just say that this game starts hopefully but goes to some pretty emotional places. That and when the credits rolled, I was instantly googling the effects we humans are having on the ocean’s inhabitants. Watching the animals, studying them, following their progress and the way they interact with one another was engrossing. Seeing what becomes of them is heartbreaking.

What’s more, the message it carries about conserving these ecosystems and saving “the planets beating blue heart” isn’t forced. This game doesn’t constantly bang the global warming or conservation drum and isn’t preachy. Instead it tells you a story with real world consequences that comes across loud and clear.

There are a few side stories that Beyond Blue attempts to tell but honestly, they don’t land anywhere near as well as the main event does. Andre and Irina have little disagreements and have different ideas about what the dives you’re undertaking should amount too. Between dives, you can also call Mirai’s sister to talk about how she’s doing at school and the health of their nan. These short arc’s keep the story moving but they’re lost as simple human drama’s in a game that emphasises the importance of the natural world.

A little sweetener that makes the whole experience a touch more authentic is that as you progress through the story, “insights” are unlocked. These are video packages of real world scientists and biologists that are studying marine life and a deeper dive on some of the animals. Andre and Irina characters in the game seem like amalgamations of some of these real world personalities and the work they do. These are a great source of extra information on the aquatic stars of the game too.

Beyond Blue isn’t groundbreaking in terms of structure or mechanics and for a lot of the game, it feels like you’re simply following waypoints. Thankfully the environments you explore, the deep sea life you encounter and the trials you see them go through make for an engrossing mix. Beyond Blue is a beautiful game that educates as much as it entertains and carries an important message that, in 2020, couldn’t come at a better time.

Beyond Blue is available now on PS4 (reviewed on a base PS4), Xbox One, PC and iOS devices via Apple Arcade.