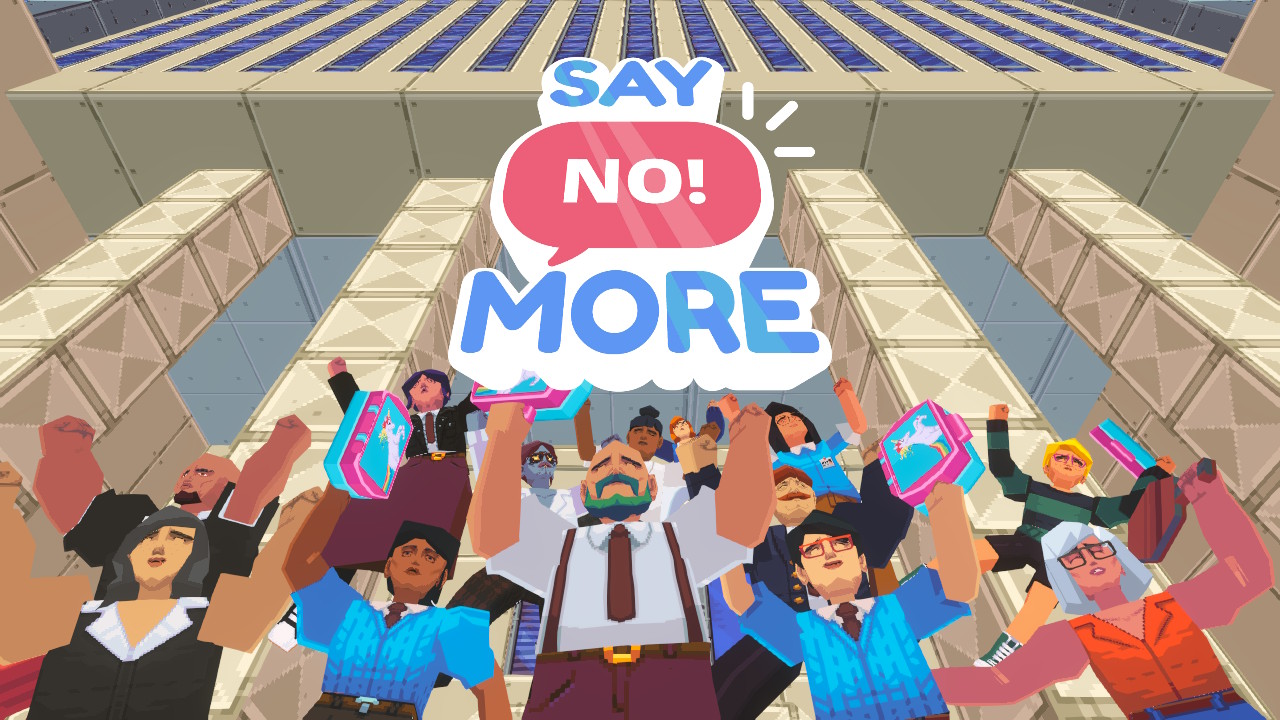 A comedy game about the empowering feeling of saying no, Say No! More has smart social commentary for those that look for it. The Finger Guns Review.

A comedy game about the empowering feeling of saying no, Say No! More has smart social commentary for those that go looking for it. The Finger Guns Review.

It’s quite rare that in a video game, we get to simply say ‘no’. Our options are so often limited to ‘Yes’ and ‘Maybe later’. On the surface, Say No! More is a refreshing on-rails, 1-button game all about saying “no”. You walk from person to person, blasting them with a powerful “NO!”. Just beneath the surface though, this game has a lot to say on the power of autonomy, on capitalism structures, on video game tropes and more.

In Say No! More you play as a nameless, initially shtum character chosen from a small array of pre-sets. It’s their first day as an intern at a new job – but on the way, their best friend and roommate would like a word. They can’t afford to pay their share of the rent. Again. For the 9th month on the trot. Unable to respond negatively, the intern simply bumbles out an “erm” which is perceived as a “yes”. As thanks, the friend gives the intern a packed lunch. Admittedly, the lunch box is very cool. It has a unicorn on it.

Unfortunately, the intern’s day continues on the same trajectory. Once they arrive at their new job they get asked to do a series of menial tasks, discover their desk is in a cramped space behind a vending machine and have their lunch box stolen by their new manager. The day would likely have continued on this same path if it wasn’t for some incidental intervention; as the intern sits at their desk, a tape player containing a motivational speech from “The Coach” drops from a vent. Slipping on the headphones and pressing play, the intern is imbued with the liberating, empowering energy of the word “no”.

This is where the core of Say No! More begins. The intern proceeds through their office while revelling in the freedom that comes with denying the requests made of them. Pick up someone’s laundry? No! Go get someone some food? No! Do my copying? No! Each rejection sends the recipient flying across the office, trashing papers, desks and much more in their wake.

All of this is triggered with just a single button (well, two buttons but A & B do exactly the same thing). The intern moves on their own accord along a pre-defined path and stops when someone confronts them. The player then triggers the “no” with a button press when they’re ready to do so. As the intern progresses through the game, they gain the ability to charge up their “no”, granting the word more forcefulness, as well as 4 different types of “no”.

Say No! More isn’t a overly interactive game. The most involved it becomes is having to charge up a blast of “No” in order to influence the environment and open up a path forward. In order to charge the denials, there are a series of taunts that can be performed with the left thumb stick. In fact, sometimes inactivity is a more interesting path forward than simply bashing that “No!” button. Some of the people confronting the intern aren’t doing so to demand something. These characters can be differentiated from the usual burdensome bunch with a pink text box and a decreasing timer rather than the usual white speech boxes. Wait out the timer instead of saying “No” and you can experience some optional interactions.

The intern’s progress through the game makes for a wacky, bizarre adventure. Their new found ability to refuse things initially finds them rising the corporate ladder before finding themselves pitted against the upper leadership of the company. On the surface, it’s an irreverent plot that has the capability to raise a regular smile. Gags are delivered quickly and while many of them are immediately humorous, there’s some smart comedy that takes a few seconds to land too.

Beneath the surface narrative though (and just beneath the surface, Say No! More makes no effort to hide it) this game has a tonne of deeper meaning. The most obvious, on the nose aspect is that this is a refreshing game to play because you get to say “no”. Rather than just groaning and getting on with the mundane quest laid before you, you get to put your foot down and Say No! more. Find cats in sector 7? No. Those escort/tailing missions? NO. It’s empowering. But not just for a video game…

This empowering autonomy is mirrored in the characters and their situations which have a not so subtle link to real world issues. There are other employees who haven’t been able to say no to unreasonable requests. Working unpaid overtime. Working through their lunch breaks. Not having a union. The longer that Say No! More goes on, the more prominent this thread becomes, highlighting the issues that commercial entities inside a capitalism system can have.

I don’t want to spoil it but there’s an aspect towards the end where a character with lots of power feels like they have earned this power because they said “yes” to a lot of unreasonable requests and worked their way through the corporate ranks. I found this to be such a smart take on the way capitalism can warp perceptions and how it can become a vicious cycle.

The most poignant message within Say No! More is how important the word “no” can be. Not just in the work place but with friends and family too. There’s an interaction that reinforces the concept that supporting people isn’t always about agreeing to do what they ask. Sometimes it can be about saying no and providing a well needed reality check. What’s more, this part of the game cements the point that saying ‘no’ demonstrates equality between individuals.

These are just a few of the underlying messages that shine through in Say No! More. There’s miraculous depth here, brought together in just a few hours of game time with limited interactivity. The delivery of all of this is made all the more palatable by the art style. With modern day sensibilities presented as a pastiche of the 1990’s, complete with chunky polygonal models, garish colour selections and stiff animations, it’s both nostalgic and currently familiar. The music is in the same vein – with the power of 90’s dance music and the quirkiness of modern indie game tracks, it’s certainly something you could tap your toe too.

Say No! More is a game you’ll play once and have a great time with – but it has almost no replayability. The only reason I can think of wanting to play this game more than once is if you accidentally said no to one of the optional interactions. There’s no branching narrative or multiple endings to uncover. It’s a straightforward narrative that says what it wants to say.

Vibrant, colourful, much deeper than it looks on the surface and doesn’t outstay its welcome, Say No! More is a thoroughly enjoyable experience. You’ll likely only play it once and it’s not a hugely interactive game, but if you like a game with a layered narrative, this will certainly deliver.

Say No! More is launching on Nintendo Switch (review platform), iOS and PC on April 9th, 2021.