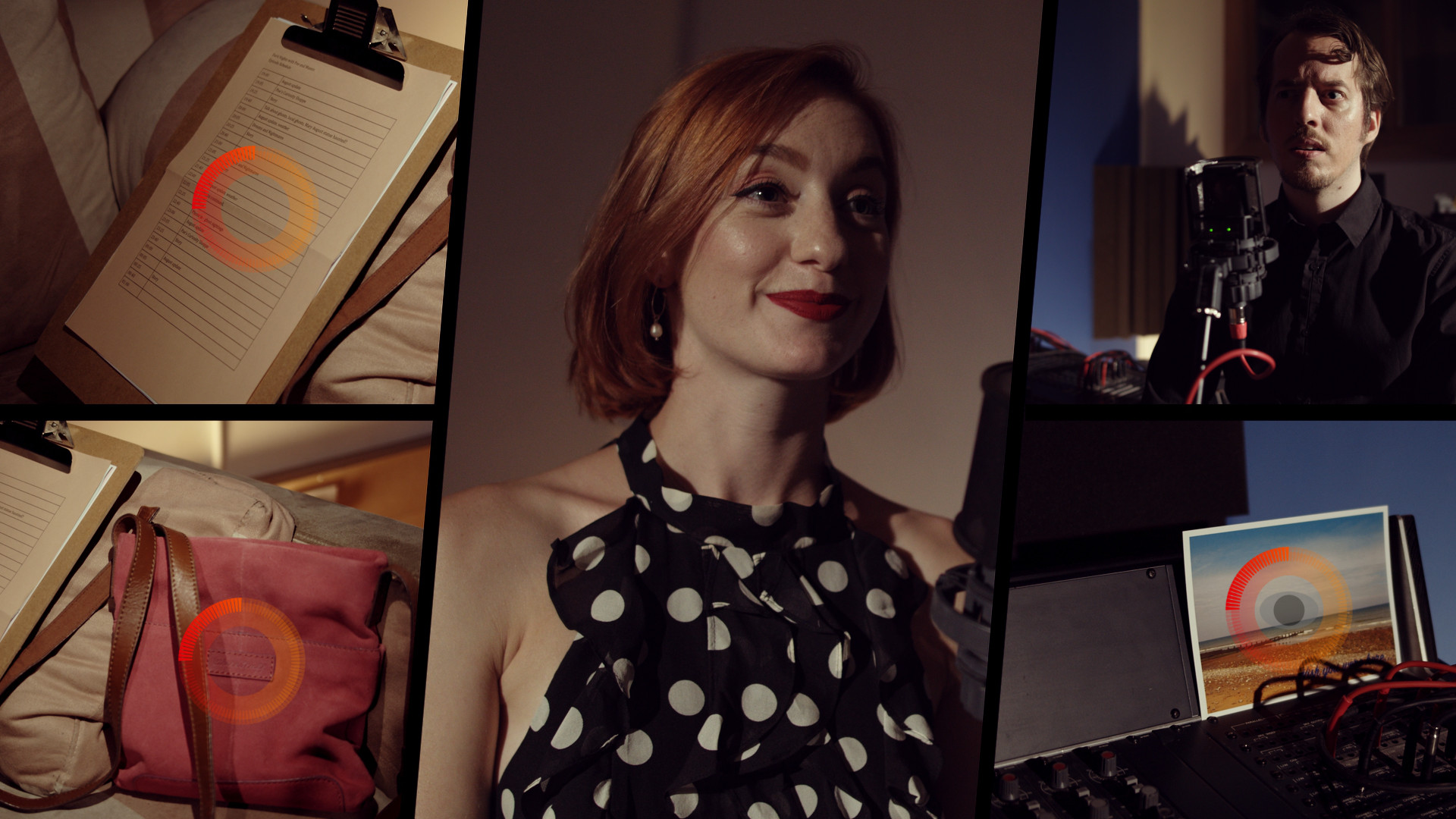 A well performed and peculiar FMV game, Dark Nights with Poe and Munro is the continuation of D'Avekki’s reign over the genre. The Finger Guns Review;

Before you go any further into this review, if you’ve not played D’Avekki Studios’ other FMV games The Shapeshifting Detective and The Infectious Madness of Doctor Dekker then go and play them first. You won’t regret it, they’re both really quite good, and the only way to get the most out of Dark Nights with Poe and Munro (Steam) is to come to it having played the previous 2 games. Poe and Munro are part of what we’ve coined the DCGU (or the D’Avekki Cinematic Gaming Universe). It’s billed as a spin-off from The Shapeshifting Detective but it draws just as much from Doctor Dekker at times. If you’ve not played either of these FMV games, there’s still fun to be had here. Some of the inside jokes and cinematic hypertext will make no sense without previous experience with D’Avekki’s unique brand of storytelling however. You’ve been warned.

This game follows the peculiar adventures of the titular characters John Pope AKA Poe and Ellis Munro. They’re radio hosts at August Radio and broadcast a show called – no points for guessing – Dark Nights with Poe and Munro. Their show is like many others – call in’s, guests, giveaways and fundraisers – but rather than pop stars and political correspondents there’s murder, eldritch mysteries and oodles of creepy. This isn’t an overtly scary game. There’s no jump scares or graphic violence. It has its moments but the atmosphere it builds is tense and fun more than horrific, like a B-Movie comedy thriller trimmed around your decisions.

There’s an overarching narrative to Dark Nights with Poe and Munro which itself is separated into 6 chapters. Each chapter has a self contained story with its own theme but the events of each chapter have an effect on the subsequent ones. Each episode starts innocently enough but something dark, supernatural or perplexing always happens. Stalkers. Murderous hallucinations. A mysterious kidnapping. A previous life and death. A warning from the future. A wish gone wrong. The stories here explore some original and chilling topics. Poe and Munro just seem to attract trouble.

And that’s not the only thing they attract. They’re deeply attracted to one another. The chemistry between these two characters is phenomenal. Constantly flirty and sometimes a little more, Poe and Munro bounce off each other like magnetised super balls. Their back and forths, a product of some excellent writing and top quality performances from Leah Cunard and Klemens Koehring, are a highlight of the game and cracked more than a few smiles on my face.

The supporting cast includes some familiar faces and there’s not a single bad performance among them. Aislinn De’ath, who played Marianna in Doctor Dekker, plays a provocative guest house owner who has some steamy meetings with Munro. Lara Lemon, Ayvianna Snow and the young Rachel Cowles are convincing and make the most of their short but important roles. All in all, the acting quality on show here is great.

As FMV games continue to broaden their boundaries to redefine what they can be, Dark Nights with Poe and Munro is a more traditional game in the genre. Presented entirely though filmed footage, edited around decisions you make, it’ll be instantly familiar to those who’ve played an FMV game in the past few years. The vast majority of the cinematography on display here is impressive. The makers obviously know how to shoot scenes to give them specific feelings and know the way to give space for interactive fiction decision making. There’s a handful of times where you can see the cameraman’s reflection but they’re rare moments and hardly game breaking.

Decisions are made in Poe and Munro by pressing one of the buttons on screen with your cursor. Sometimes there’s just one button and the choice is between pushing it or not. Other decisions have multiple buttons on screen which will explore different avenues of the story. The choices you make can have massive differences on the outcomes in most of the chapters in Dark Nights with Poe and Munro. Different environments, characters and endings are awaiting you down separate narrative paths. You’ll have to work to uncover one of the endings. You’ve got to complete the chapter using as few decisions as possible and it might take a replay or 2 before you’ve put the pieces together.

Thankfully, once you’ve seen a scene in the game and completed it, you can skip to a decision with a click. All of the additional content you didn’t catch on your first play through can be uncovered in an hour or so after finishing.

There’s one issue I have with Dark Nights with Poe and Munro which can be a tad frustrating. The buttons you click to make choices in this game are simply circles overlapping the part of the screen they relate too. There’s no text or description to give the player an indication of what that decision is. For the most part, it’s obvious what you’re choosing. Sometimes there’s 1 circle over Poe and another over Munro. In that instance, it’s obvious, but there’s a number of decisions that didn’t feel so obvious and I felt like I was making decisions without really knowing what I was making a decision on. This isn’t a deal breaker by any scratch of the imagination but felt a little awkward at times.

The other thing I feel like I need to mention is how tonally jarring this game can be. This isn’t something new for D’Avekki. Their games can go from the sublime to the ridiculous in seconds and without batting an eyelid. In one chapter on Dark Nights, you’re searching for a missing student. You’ve been told time is of the essence but both Poe and Munro take the time to flirt and joke a little with their respective suspects. As funny as these sections are (I laughed out loud at 3AM because of one of these parts) they feel a little out of place given the time sensitive nature of the chapter. In another chapter, there’s an altercation in a bedroom that felt tonally out of place and made me feel a little uncomfortable. I don’t think the scene really added anything to the overall story either. The majority of the content in Dark Nights is great, setting an ominous, mysterious tone while trying to be fun. For the most part, it achieves that. There’s just a few moments that feel out of place or unnecessary.

To address a question I’ll likely get asked if I don’t answer it here – Dark Nights with Poe and Munro is approximately 4 hours from start to finish. There’s another 2 hours of entertainment if you explore all of the narrative branches on offer. I completed the game the first time around in one sitting. It’s the perfect game to start and finish in one evening and doesn’t out stay its welcome. I’ll be honest, I was disappointed when it ended but that’s because I’d had such a fun time with this game, I hoped there was more.

It would be remiss of me not to mention how brilliant the soundtrack and audio work in Dark Nights with Poe and Munro is. The theme song is a real ear worm, playing on repeat on my internal jukebox hours after I’ve stopped playing. Like the best thrillers, this game uses its music to really build up the tension but it also knows how to use silence really effectively. This is most clearly demonstrated in the final chapter of the game where I found myself hanging on every noise coming from my headphones. A true achievement.

Dark Nights with Poe and Munro is more of what D’Avekki does well – weird, cheeky, eldritch FMV games that have snappy dialogue and a penchant for the lovecraftian darker side of entertainment. If you enjoyed Shapeshifting Detective or The Infectious Madness of Doctor Dekker, you’ll enjoy what this game does too – more so than those who haven’t. There’s a handful of scenes that feel out of place, given the quality of the rest of the game, and the timed hot-spot interface is too nonspecific at times. Skilled performances from the cast, some impressive camera work and a concept that has legs beyond the 6 hours of entertainment presented here mean this is an FMV game tuning in for though. I’d certainly sign up for more.

Dark Nights with Poe and Munro is launching on PC via Steam on the 19th of May 2020.

WRC 9 (PS4) Review – Realism Where It Matters
Ys: Memories of Celceta (PS4) Review – Not To Be Forgotten
Spirit of The North Enhanced Edition Review (PS5) - The Fox Doesn't Say Anything.