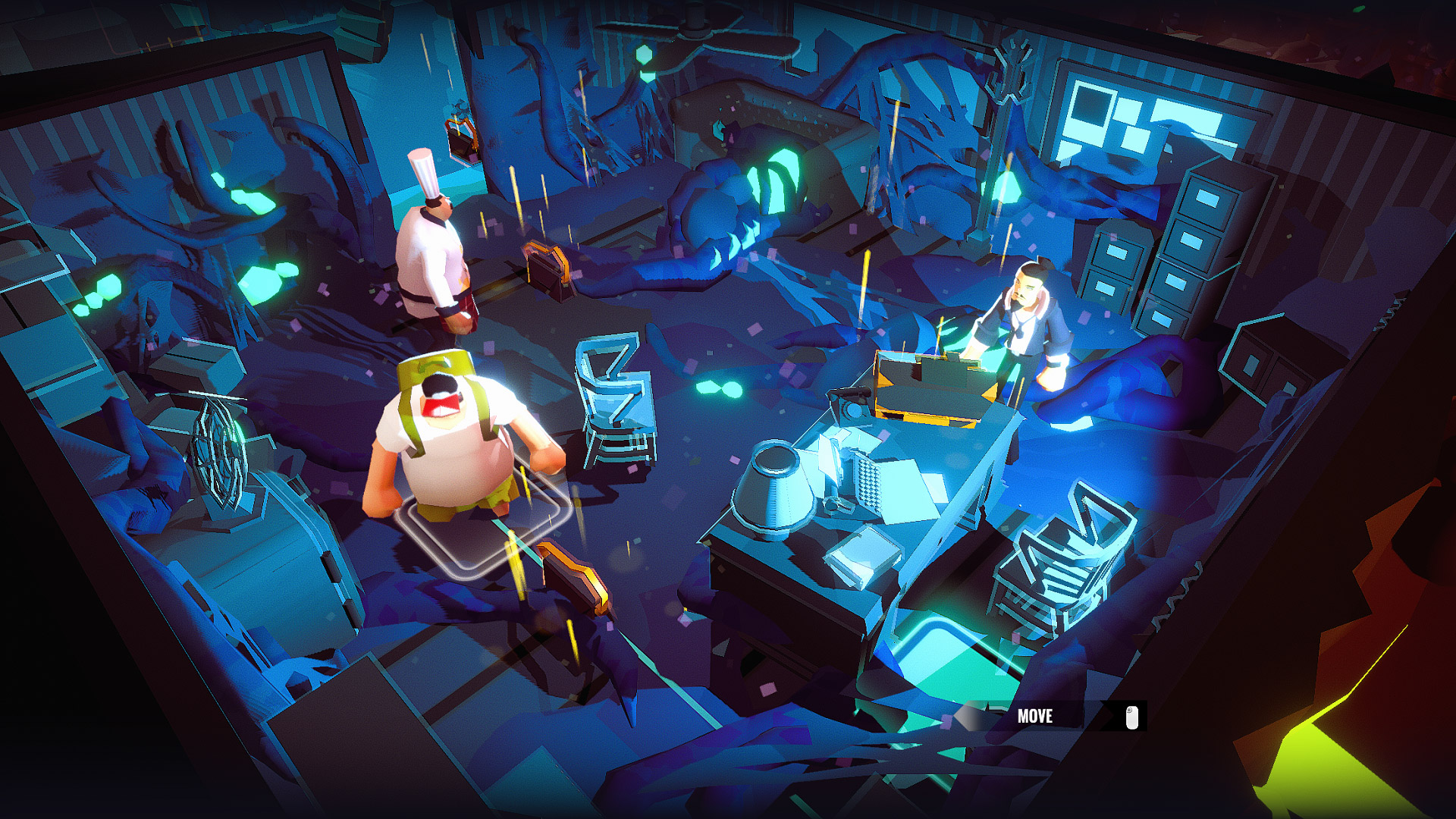 A tactical, rogue-like, turn-based RPG from Apple Arcade arrives on consoles. How does it fare? Dread Nautical - The Finger Guns Review;

Around about two weeks ago I was asked by one of the Finger Guns team which genres I tend to steer away from when it comes to sitting down and getting some video games played. Without hesitation I would rattle off the standards; turn-based, tactical, roguelike. Individually, they’re genres that are perfectly suited to fans of that particular ilk, and whilst I don’t particularly fall into that category, I fully appreciate why people would enjoy them. Together? All three at the same time nestled into an RPG? Imagine my surprise when not only did Dread Nautical fall into my lap, but that I genuinely had a lot of fun with it.

But did I have a lot of fun with the game in spite of the mash-up of genres I tend to drift away from? Dread Nautical’s most intriguing aspects are its story and characters, which were more than enough to keep me seeing it through to its conclusion. As I rolled credits I found myself thinking that after the first couple hours I didn’t even really notice the fact I was playing in a strangers pool of game mechanics, and as every good video game will attest, it’s far stronger as a whole than the sum of its parts.

There’s little comfort to be had as the game begins, dropping you immediately into the action with a prolonged cutscene detailing the nasties that have taken over a cruise liner your character is onboard. There’s a fair amount of information you can garner from this initial scene – one that plays every time you boot the game up. Thankfully, it can be skipped, though you’ll want to watch in full the first time to get a grasp of what’s to come. Essentially you’ve been chosen to take on the infestation of the cruise liner, transported into a realm of really rather not good things around every corner. Thankfully, you get your own quarters with crafting stations and beds and your own lift to each floor of the liner, so it’s not all bad. There’s also a fellow survivor in your safe room who does very little but shout exposition and tells you what you need to be getting up to on the above levels.

And try as it might, Dread Nautical is not a scary experience. It’s not even a particularly tense one. It could just be a personal thing, but the colour palette and the games willingness to be so very open in regards to your upcoming enemies made the tension feel somewhat diminished, allowing me to prepare with crafting stations and configure my loadouts accordingly. The visuals are bright and breezy, looking crisp and clear on your shiny flatscreen, but there’s nothing to be afraid of. Dread Nautical as a title is quite the oversell.

It reminded me somewhat of State of Decay in the early stages. The combat, once you do come across the beasties that have taken over the passengers on the ship, is traditional fare for this genre – move from block to block approaching nearby enemies and countering their attacks with your own depending on how many action points are available to you at any given moment – and resources are naturally, limited. Items can break and ammunition for your trusty pistols is difficult to acquire, so your tactical hat is worn pretty much throughout, whether it be in the combat or in the decision making in regards to your inventory. You can repair your equipment but will naturally cost you resources that could be better used elsewhere. There’s a constant juggling act which is up to you to keep in the air as you navigate the ship looking for survivors and recruiting team members.

And this is where Dread Nautical shines. The character work is fun and interesting, allowing you to recruit survivors to take on the beasties, uncover the mystery and get out with your lives. It’s not a simple task, as naturally survivors are feeling rather untrustworthy at this moment in time, so you’ll need to prove yourself to a few of them. It’s a neat mechanic but can feel a little drawn out at times when you just want to get people on your side. It’s not uncommon in video games for the whole ‘I don’t know you yet, go do things for me then I’ll like you’ trope to rear its head, but here it does seem a little odd. In such a confined space against impossible odds and hugely outnumbered, you would think the survivors would be desperate to find each other and work on an escape plan. Ergo, it’s not the case and whilst it can feel a tad overlong in parts, it’s hugely rewarding when they agree to join your crew.

Of course, your resources then become everyone else’s, so keeping a lid on your inventory and what you have free to share adds another level of complexity to proceedings. Food is a scarce wonder in Dread Nautical, and as a primary health booster – along with bandages – sharing it is something you’ll have to do. Dread encourages exploration through every available room and sorting through luggage or draws to find supplies, so keeping an eye out for sparkly things you can loot is all part of the fun when you have to feed your team as well as yourself after a rather tiring battle with the possessed passengers and crew members.

Depending on the state of your team and your ongoing hunt for stuffs for them to eat or shoot, there’s always the option of just avoiding combat altogether and persisting to continue your resource quest. Of course, taking out an enemy will have them drop some much needed gear, but if you don’t have the support to take them down you’ll end up rather deaded, and depending on which difficulty level you’re playing on, that’s a rather drastic choice – did I not mention? Oh, on the hardest level if you die you have to start the game over again, losing all of your resources and team members. Ouch. Game Over really means something in Dread Nautical, so plan accordingly. You are severely punished if you don’t.

The controls of a mobile to console game was always going to be an interesting transition and thankfully there’s little to complain about here. It’s clearly designed for a mobile/tablet screen or a mouse and keyboard, moving the camera to the triggers was a stroke of genius, allowing smooth movement to see around you at all times with little fuss. L1 opens the floor plans and R1 allows you to switch between your characters. It’s a rather seamless transition, and something Zen Studios should be commended for. It’s not an easy task to transfer controls of another system over, and we all know games that have failed to pull it off, but with Nautical and the likes of Two Point Hospital, it should that games designed elsewhere can work just as well on controllers so long as the time is taken to tweak correctly.

As mentioned above, the strongest assets of Dread Nautical is the story and the characters. No, it’s not exactly a Lovecraftian masterpiece but it’s engaging and fun, enough to keep my interest through game mechanics I’m not a huge fan of. I played through my campaign as Mirage – one of four characters you can choose from – a badass female lifted straight from the Dolemite era of movie making, and she’s a lot of fun, kicking out quips and one liners like they’re going out of fashion. The dialogue and performances can be kind of cheesy at times, but it fits in rather well with the camp nature of it all.

Which is all well and good, but its best parts are seemingly at odds with the rest of the game, thematically. Dread Nautical attempts to create an unsettling and creepy atmosphere with its introduction video and menu music, but the characters are bright, breezy, dare I say fun? The enemy isn’t particularly something to be taken seriously at any given moment and as such, the fear factor is gone almost immediately.

It’s interesting that a ‘tense, corridor-focused enclosed’ horror roguelike does have a colourful and light visual style, but it doesn’t ever work as a whole to create a sense of fear or, dare I say it, dread.

As it is, Dread Nautical is a solid and intriguing turned based, tactical roguelike RPG, just don’t expect your tense horror itch to be scratched, because you’ll be very much looking in the wrong place. The gameplay isn’t too overbearing for newcomers and the games primary characters certainly are fun to explore this doomed ship with, the story is twisty and keeps you engaged, and the hard mode will test your metal beyond much else around at the moment, but there’s very little here you haven’t seen before elsewhere and executed with more panache.

For this reviewer though, who seldom meddles in these genres individually, let alone all together, there’s an adventure here that’s worth leaning into.

And stick with Mirage, she’ll have your back the whole way through.

Dread Nautical is out now on PS4 (reviewed), Xbox One, PC and Apple Arcade.

Raji: An Ancient Epic (Switch) Review - Good But Not Quite Epic
SEASON: A Letter To The Future Review (PC) - Permission To Feel
Cyberpunk Turn-Based RPG Jack Move Has A Release Date