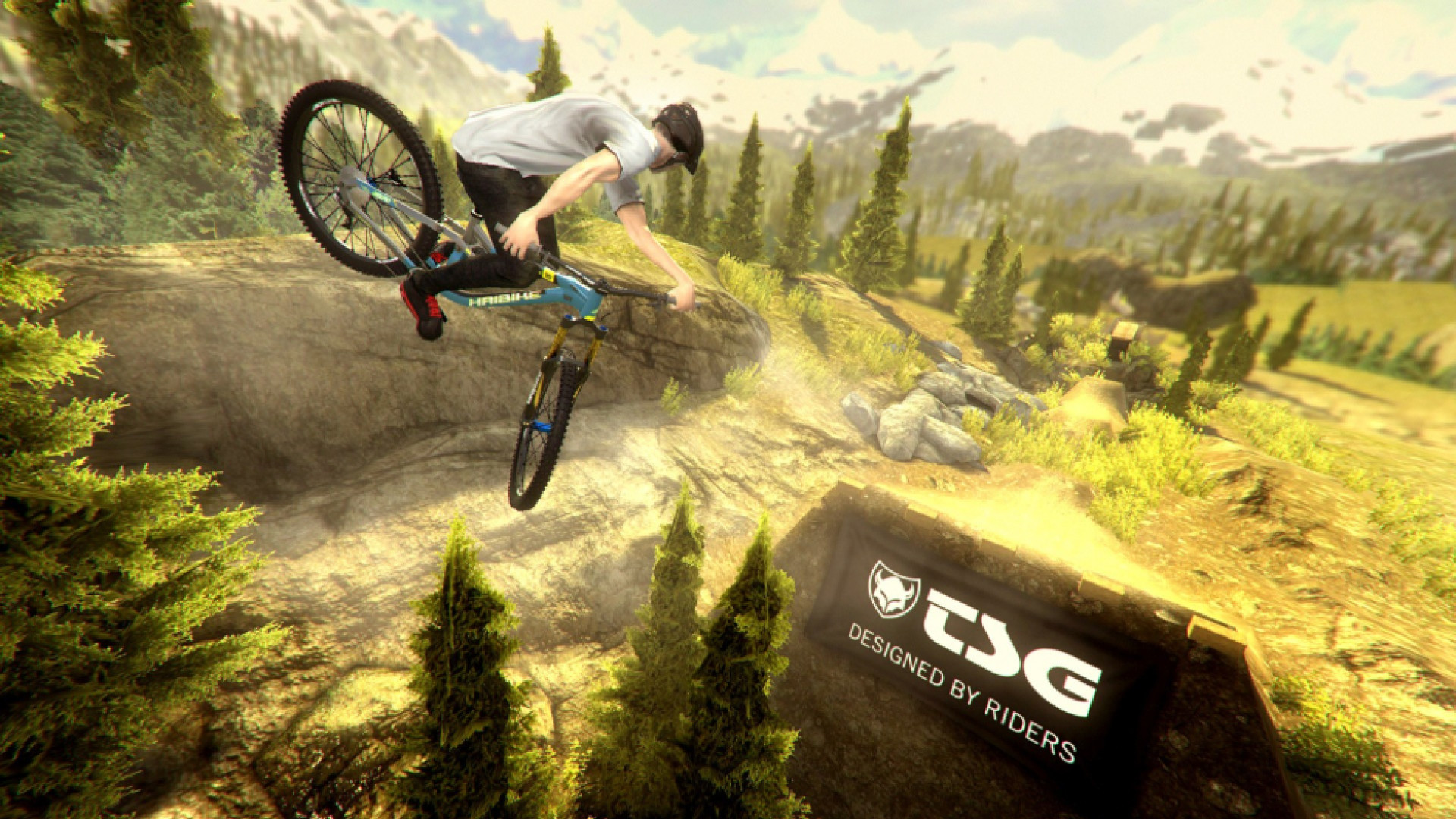 A 2.5D bike game in the vein of Pumped BMX and Trials, Shred! continues the high speed and trick system of its original, but at the expense of punishing tracks and a ludicrous progression system. The Finger Guns review:

I’ve said it a few times now, as well as in my review for it, that I like the Trials games. The 2.5D racing style, lining up onto the next obstacle and the fast-flowing nature of hitting the top times and then some. When it works, it works well.

But what halted Trials Rising in its career progression wasn’t down to just finishing levels in good times anymore, it was its ridiculous live service/career component. You could nail a track in record time and get a gold or platinum medal, and it wouldn’t be as prestigious as it used to be.

I use that comparison because Shred! 2 follows a similar beat. It doesn’t matter how fast or perfectly you finish some tracks; if you haven’t pulled a 360° backflip off of an obstacle, you ain’t progressing. Such is the challenge(s) on some of the tracks that it grinds any progression to a halt, bringing my enjoyment of it to a similar level.

When it works, it works well. The riding is fluid, the bikes handle well enough and the trick system is simple yet fun. But is its absolutely backwards approach to continuing enough to kill it for me? Let’s saddle up and find out…

Flying High… Or Not, As Can Be The Case

The concept behind Shred!’s gameplay is pretty simple: you ride as Sam Pilgrim, and only Sam Pilgrim, as you start a run at the top and make your way to bottom in both speed and style.

The first few levels of the main career act as the tutorial, and as such, the mechanics of hitting the right lines and maintaining speed throughout. This is done through pumping, a knack that takes some getting used to. The process is pretty straightforward: you hold A whilst airborne, holding it as you land and release at the peak of a jump. Much like OlliOlli, this rhythm ensures that you hit the right lines and nail jumps properly.

Which, sadly, becomes one of Shred!’s downfalls. Missing that perfect landing can kill your speed completely. Fortunately, you can pedal, but this only applies to flat or downhill sections. If you’ve got an uphill jump to clear, you’re shafted. Which means, unlike Trials, you have to start the whole run away. Granted, a checkpoint would be a difficult, again for the lack of momentum, but it is infuriating to restart every single time because of one mistake.

Thankfully, most of the courses can be done in about thirty seconds. The basic premise is fluidity and speed, getting that pumping rhythm right and not being put off your stroke…*snigger*.

And when it works, it works well. Bombing down a hill only to soar high before lining that landing up and doing it again is a simple pleasure, made all the better through practice. It’s just marred by the complete lack of leeway if you balls a landing up halfway through a course. Whilst it harkens back to the “practice makes perfect” mantra we should all know by now, it can be infuriating to be near the end and literally be unable to clear the last ramp.

It’s Not All Downhill From Here…

Thankfully, there are more styles of course than just downhill sprints. Keeping it more grounded in reality than Trials or OlliOlli, the career mode throws in some flatter, trick-based levels too.

These focus more on the technical aspect of all-terrain biking by giving you flatter, obstacle-based runs instead. Ledges and flattops give rise to manual challenges (as in, a bike manual, where you balance on solely the front or back wheel), or more trick opportunities in massive jumps or drops. For these, you switch out your full suspension bike for a hardtail (read: just front suspension) but it’s more of a cosmetic addition than anything.

However, these tracks all fall under the same trappings of the racing ones: bar the occasional speed/point-based challenges, the criteria for some fall under a ridiculously strict quota. Of course, they do vary: early courses will just ask to you backflip off of a certain obstacle or ramp, which is easy enough. But when you’re asked to front flip and do a tweaked trick, which means holding the trick for longer, on a jump or drop with a smaller airtime it becomes much harder.

It wouldn’t be so bad if you could come back to these after you’ve progressed further, but you need a certain amount of stars (that each challenge rewards you with) to unlock courses. Again, requirements start quite low, but the further you go the count gets higher. So if you’ve been cruising by on one or two challenges per level, you’re going to have to go back and proverbially get good. It’s that that absolutely kills the joy for me in places.

Hold On To Your Bu… Your Handlebars

Yet the biggest twist in this review is that despite my protestations, I actually quite like Shred! 2. Sure, the progression concept sucks more fun out of the game than a flat tyre, but once you can get into the grind it’s a fun, if endearing game.

Naturally, no one is going to ace every challenge on their first attempt. Once you get used to the pumping and line mechanic, you start to ahead of your line where a jump is going to be, or when to hunker down as you land into a smooth landing. The challenges, obtuse as they can be, are actually highlighted in each course as to where to pull them off. Though they may range from pulling a certain trick or clearing a gap, they’re numbered so at any time you can pause the game and see what you need to do.

The core of the game, much like Pumped BMX, is repetition and getting better. But it’s not just the practice that’ll make you better, it’s also your arsenal of rides that can help things too. Whilst the bikes only comes in two types, downhill or hardtrail trick bikes, there’s about half a dozen of each to unlock along the way. Of course, these are also unlocked with challenge progression, so the fruits of your labour also pay off in that regard.

With each new bike comes a varying amount of stats, from speed to spin, that you’ll need to play around with and get the best feel for on certain tracks. It adds a small degree of depth to those who go looking for it, if you’ve got a challenge that needs more rotations on a backflip or a fastest time tied to them. Some of the stats are nominally incremental and don’t affect the overall gameplay too much, but for the perfectionist, it’s all there for you to play with. If you’re feeling particularly fancy, you can customise each bike in a wild array of colours to suit your playstyle. Neon pink bike take your fancy? Go nuts.

Bumps, Broken Bones and Everything In Between

Yet however exciting you want to make your ride, the same can’t be said for the rider himself. Sam Pilgrim, the face of the game, only comes in one flavour of boring: from his barely customisable outfit to his terrible voice over contributions.

I get that this was a small budget title, but Sam’s (if it is him at all) cheers and encouragement sound completely phoned in. I mean that in the literal sense; he could have recorded them as WhatsApp voice memos for how awful they sound. I would just as rather have had no vocal track than the lasklustre level of recording in these. Yes, that sounds old man-ish and grumpy, but honestly, check the trailer out if you don’t believe me:

Vocal criticism aside, there is a good game here. It may suffer from an unnecessarily steep difficulty climb (which is ironic for a downhill mountain bike game) that really tests the whole “one more go” philosophy to breaking point, but the good intent is there.

Much like OlliOlli, Trials or Pumped BMX, you’re never going to master it straight away. Every game has a degree of repetition to it, that’s a given. But in some of these courses, ranging from lush woodlands to alpine halfpipes, it’s more the specific nature of each challenge that’ll make or break some people.

If you can get past that and seek a new type of challenge, then you can’t go far wrong with Shred! 2. It has indie title written all over it, so if you can appreciate it at that arcade level and price point, it’s definitely worth a look for those that want to push themselves. It’ll push you and you’ll get mad at times (please, do. I can’t be the only one that gets annoyed), but if you can persevere until you unlock new rides to help, it opens up the challenge with progression and practice.

Barring its initial difficulty, Shred! 2 opens into a fun little take on MTB and trick-based riding skills. You just need to practice… a lot.