In Other Waters Review – No Man’s Ocean 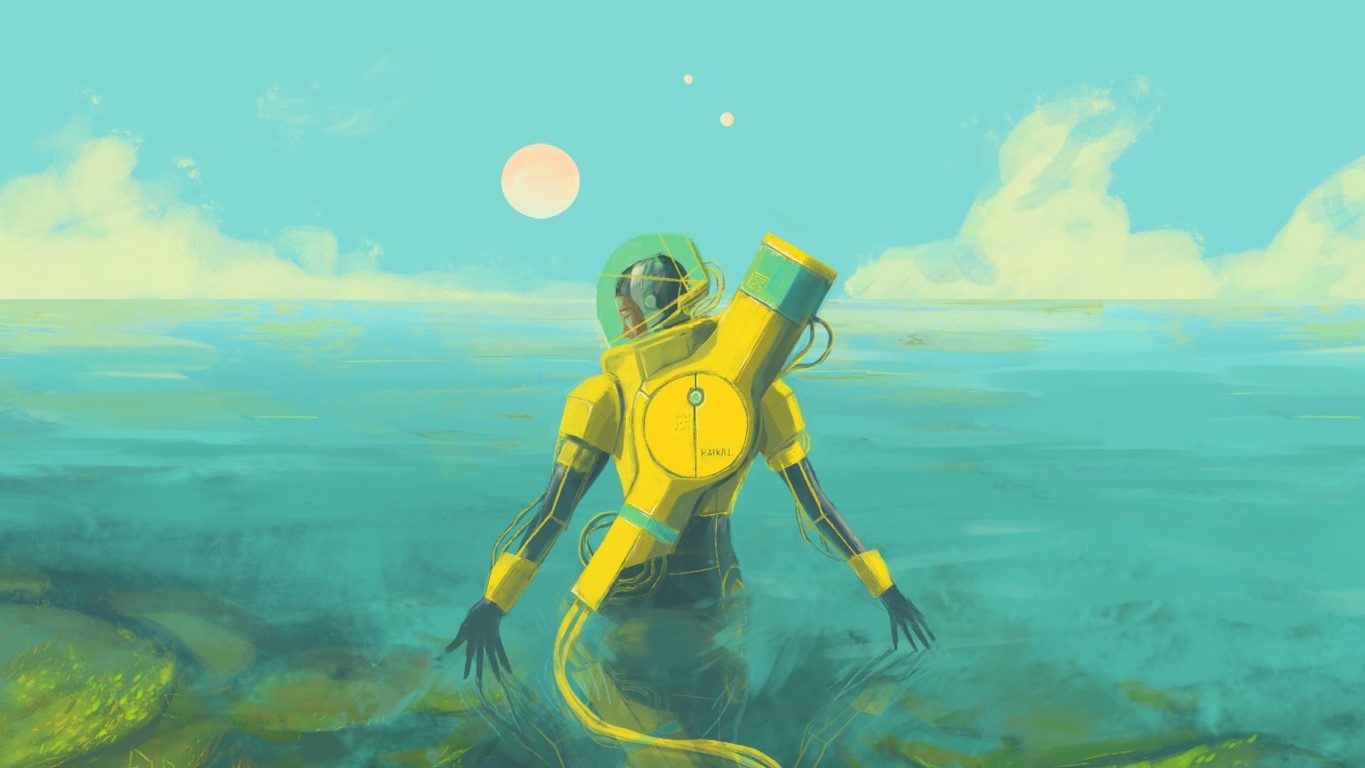 Ross Keniston
In Other Waters encourages patience, engrossing you with an unforgettable narrative. The Finger Guns Review.

In Other Waters has some guts to release this week. Stuffed between the AnimalDoompocalypse and its big brother of two major remakes, you’d be forgiven for thinking that a game much like this one would fall by the wayside, ironically lost at sea. From a personal standpoint, after wrapping my head around what this experience wanted to show me, I came out thinking In Other Waters might have just outdone them all.

Now strap in, because I’d like to take you on a bit of a journey. A little while ago I found myself staring rather blankly at my games collection. Over the course of this generation I’ve bought a lot of games, perhaps too many and I’m ogling the colours of their thumbnails and they’re offering precisely nothing in return, the same way a sunset ignores your ethereal admiration. Whilst they’ve offered countless unforgettable moments in the past, the overriding sense that I’ve rinsed them all of their offerings washed over me and I knew that I had to find something a little different to scratch that gaming itch we’re all told will go away if you just leave it alone.

But you don’t want to leave it alone, do you? The way the world is right now I needed some kind of escape. Animal Crossing works to an extent, but I’m at the stage where it transitions from pure joy to a second job. In Other Waters landed in my mailbox and by chance, it was exactly what I was looking for, a sunset that actually caught me staring, reached out and gave me a high five.

Instantly I was thrown. I had an idea in my head of what In Other Waters was going to offer me and within minutes I was proven to be incorrect in my assumptions. What the game presents to you, visually, is very little. Hardly anything, in fact. Playing as an AI fitted inside an exosuit of a deep sea diver scientist on a mission to find a lost colleague stuck deep underwater on an alien planet, your visuals – as you can see from the screenshots – are precisely that. It’s not an awful lot to be admiring from a visual standpoint, and it’s immediately a little intimidating, with a slow unravel of what each little segment can do to help you and your human companion through these unknown, treacherous waters.

Yet the simplicity of the visuals is hardly the point, as In Other Waters is keen to point out, you are terribly intelligent for an AI, so much so that you’re able to provide help and navigation, power up the suits and fashion items to use in order to swim through to areas that are blocked by alien terraforming. Your job is to scan environments and ensure your human can move safely and freely, whilst also admiring the world around her and collecting samples – which you can then use to craft items and ensure the mission is seen through. You’re on a manhunt after all, and whilst you’re exploring and finding various clues there’s always something new to see. This is the first time your scientist has been on an alien world, and you’re discovering everything wonderful about such an idea along with her. It’s a beautiful idea and one that I can’t quite believe hasn’t been told in games before.

I did what I could to explain In Other Waters to the Finger Guns team before the embargo hit and the best way I could explain it was simply an interactive text adventure. The story of a simple search and rescue turned into a fascinating portrayal of discovery and wonderment was what got its claws into me without skipping a beat. Your scientist is able to communicate with you, and you’re able to respond with simple commands that are relayed back to her as ‘yes’ or ‘no’. It sounds perhaps primitive, but the way your relationship builds throughout the story is frankly overwhelming. There isn’t a huge amount of conversation to be had, but not a single line is wasted in building up the world and your scientist relaying what she’s seeing surrounding her. You get to experience a human being discovering alien life for the first time, the same way a young child discovers numbers or colours. It’s a joy to be on the journey because you’re the one that relays the information onto your scientist, scanning alien life and plants that reside in trenches or on the rocks deep underwater, and the reaction is always one of joy and wonderment, it’s a beautiful concept.

What this mechanic creates so brilliantly is an idea of what these creatures and world around you may look like, without ever seeing for yourself what the scientist sees. Reading your way through this game may not be for everyone, but the world of pure imagination this conjures up encourages you to keep exploring. There’s no time limits, you’re free to work through the game at your own pace, something that hit me over the head when I realised I started this game before midnight and was still playing as the sun was peeking through the clouds in a callous attempt to get my attention. I was far below the ocean with my eyes and my mind wide open and I couldn’t even see anything.

As you’ll see from the screenshots, that which you can discover is presented in either triangles or circles. Triangles are where you can navigate your scientist towards, with circles being life under the ocean you can interact with or samples you can collect if you come across a circle within a circle. You’re able to navigate a far way around the ocean floor and you’re rewarded for your curiosity with new samples or simply more ocean to explore. I’ve been playing the game on the Switch and the controls feel fine, if not instantly comfortable. It’s clearly designed for a mouse and keyboard and whilst the handheld does a fine job of replicating, it’ll never feel perfect. There’s a little learning curve once the game begins as you figure out just what on earth is being presented in front of you, this doesn’t take too long to feel like second nature once the rollout of describing your tools is complete.

Whilst In Other Waters is relaxed, and doesn’t force you to navigate at a particular pace, allowing you to think that the game will continue in such a way, there are the odd curveball that circumvents the chill and adds a little nod of tension to proceedings. Upon exploring you can find yourself up against damaging blossom or tentacles blocking your path. Currents can knock you off course leading to additional traversal looking for samples you can fashion into items in order to either find an alternative way around or flex that ‘video game’ muscle to try and work out a solution. These moments are a reminder that you’re playing a game, and you’re not actually moonlighting as an AI construct within a deep sea divers suit, more’s the pity. There were also certain times I found myself a little lost or unsure of where to go which led to a miniscule level of frustration, wishing the game would hold your hand just a little bit in certain moments rather than leaving you out there to figure it out. You have all the tools at your disposal to overcome any issue, you just need to work out what to utilise.

And then there’s the audio. The soundscape of an alien ocean bed turns a mellow, peaceful experience in to an ASMR zen-like state of euphoria beyond the game itself. I used the word ethereal above and I’m going to use it again, purely because that’s how the games audio had me feeling. It was utterly beautiful, strange, unnerving and intoxicating. The real sense that you’re about to find creation unlike anything else ever seen before, and with your companion describing to you everything she’s coming across with such magnificent, explicit detail, there’s very little the audio can’t make bigger and bolder. I need the soundtrack in my ears for when I want to sleep for days and days. I’ll have to ask nicely.https://web.archive.org/web/20200531000202if_/https://www.youtube.com/embed/NM2bOvd752s?feature=oembed

Upon completion, strangely I was reminded of Night in the Woods. Now, thematically these games have very little, if anything, in common. There’s damn near nothing at all these games share, they’re polar opposites in terms of the kinds of experiences you’re getting out of them but if you follow my reviews, you’ll know the impact that game had on me. In Other Waters washed over me in a similar way.

When it was over, I had to catch my breath. The narrative is by far the most engaging and wonderful I’ve had the pleasure to experience this year so far and perhaps I can owe that to a variety of things. Not just the staggering writing throughout, or the fact the game came out of nowhere only to knock me sideways, but that it happened now. Right now. When the world is upside down and there’s so much fear and uncertainty surrounding us without any indication of when it may be over. It’s figuratively and literally, isolating.

Thankfully, we’re the ones who have video games. We can build worlds in our head away from the one we physically embody and imagine a life so much more fantastical and fairer than our own, and in a time where we can perhaps feel somewhat helpless, there’s very little like this medium that can encourage a mindset of peaceful underwater exploration, and a story that moved me to tears whilst I simply navigated a dot on the screen to go from one triangle to another. What a wondrous gift In Other Waters is.

Categories
GamesReviewsRossko
Tags
In Other WatersNintendo Switch
You may also like

The Finger Guns Podcast Ep.90 – How To Improve The Switch

Taiko No Tatsujin Rhythm Adventure comes to the West for the first time.