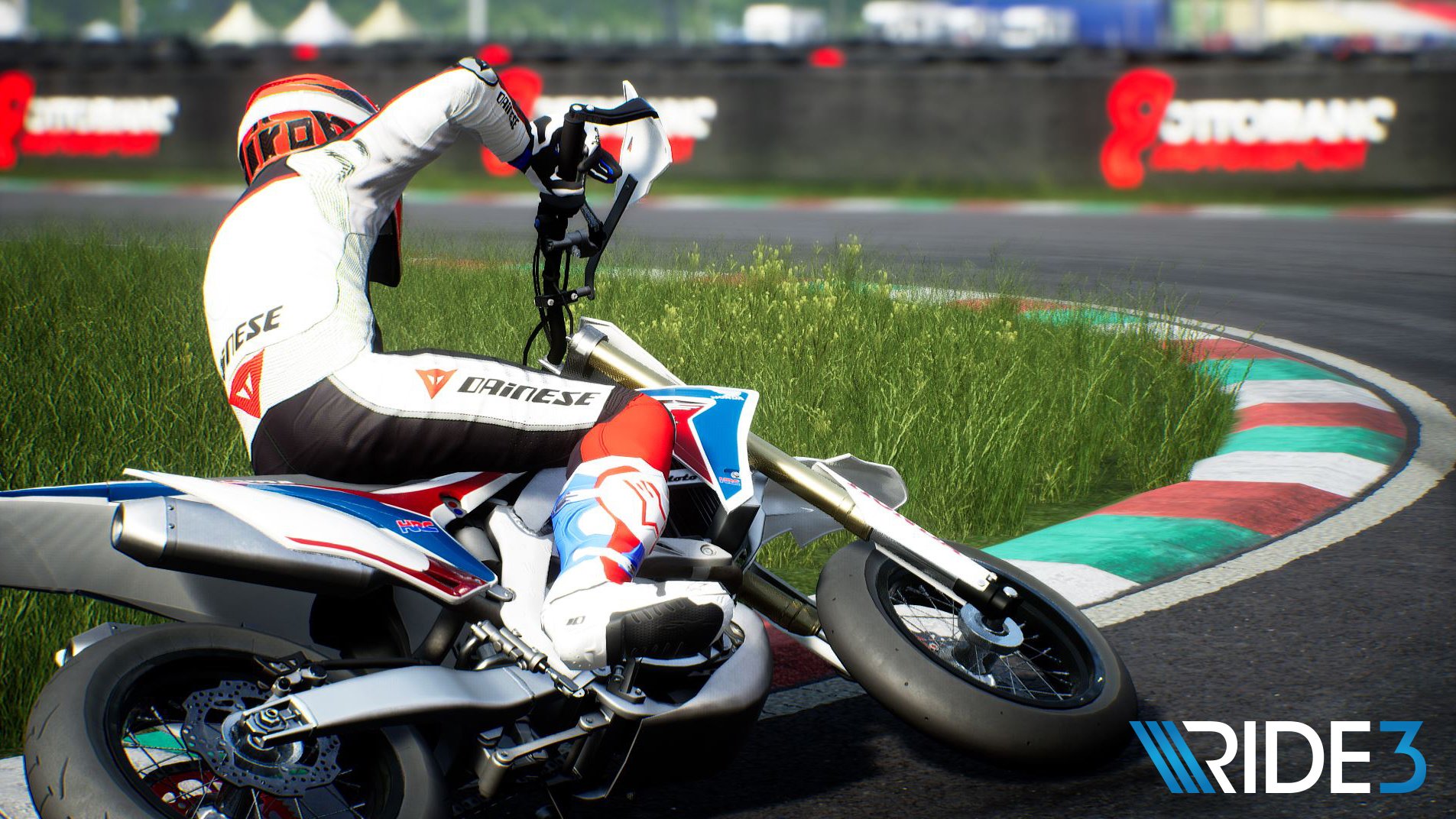 Often cited as the "Forza for bikes" series, is two wheels better than four? Here's the Finger Guns review to help you out:

Often cited as the “Forza for bikes” series, is two wheels better than four? Here’s the Finger Guns review to help you out;

After the travesty that was Road Redemption last time and its flagrant disregard to physics, it was time to get back to reality with Ride 3. The problem is, it might be a tad too real…

From that, you might gleam the obvious: it is hard. That’s not strictly true. I will say that it is difficult, but that’s largely in part to it being a sim racer. For those unaware, sim racers are meant as more realistic gameplay experiences. No power-ups, speed boosts or wacky characters, instead focusing on accurate representations of the world of motorbike racing.

Kudos to Milestone though, for they have really done their homework for the third series iteration. A lot of effort has gone into each bike, the many tracks and race modes. As mentioned before, Ride is cited as the best motorbike racing game series on the market. But does it make it fun?

Well, that’s the inherent problem, isn’t it? Fun is purely subjective, as we are all different. To stop mincing words, I will come straight out with it: I didn’t have fun with Ride 3, at least not to start with.

As with most current racing games, the game starts with an introductory race with a high end bike. It doesn’t, however, act as a tutorial. You are thrown into a two lap race of Laguna Seca, notorious for its twists and corners, to see how well you do.

I did not do well. I fell off many times, was dead last, couldn’t corner properly, you name it. It immediately made me think, “Nuts to this, this is too damn hard” and didn’t enthuse me for what’s to come. Even with the bike and track assists on, including a Forza-esque track marker, it was (for me) insanely difficult.

So, not a good start. Once the red mist had cleared, I thought I’d make a start on the career mode. In for a penny and all that. Thankfully, the career is a bit more forgiving. Structured must like Codemasters first Dirt game, career progression is set out as a pyramid/tier system.

Starting at the bottom, you participate in a variety of low-level, slightly more accessible races. Podium positions give you stars and money, with the next tier being unlocked after a set number of stars is obtained. Given an initial budget of £10k, you will need to purchase your first bike before you can race. For me, a nice new Aprilia 125 R in jet black got me off to a better career start.

Low and Slow, That’s The Tempo

After the initial punch in the face of the introduction, my first few races were a bit more grounded. It still took a while to get used to, but I wasn’t hitting corners at ridiculous speeds and launching myself Team Rocket-style over barriers.

I can see why the game would try to draw you in with some high-end racing, but unless you’re familiar with the series and/or motorbike racing, it can be jarring. Get past that, and Ride opens up into a very competent and well-formed racer. Leaning into corners takes some getting used to, but it won’t be long until you’re rubbing elbows with your fellow racers.

For the more immersive experience, there is not one but two first-person perspectives to choose from. One being a standard headcam, the other inside the helmet for that extra realism. The former lets you see from the handlebars ahead, whilst the latter adds the tinted visor borders and muffled sound reduction you’d expect from wearing a cranium case. Again, if you’re a bike rider in real life, you’d be used to the shift in position as you lean around corners. If you’re not, it’s a very surreal sensation. It’s almost like watching someone else playing in VR, but you’re doing the driving.

Not that it’s a bad thing, it actually enhances the immersion somewhat. It will take you a while to get used to. Remember all those years ago, when you’d mock your siblings for turning the controller when playing Mario Kart? Well, karma is patient, as you’ll find your own head bobbing as you race. Trust me, it’s inevitable.

Whether It’s An Inch Or A Mile…

Off the track, Milestone have also gone the extra…mile (sorry, I couldn’t avoid it) into rider life and bike maintenance. After picking some generic character presets, you’re given a vast wealth of liveries to choose for both you and your garage.

Much like your Forza’s and Gran Turismo’s, customisation and tuning is a big part of the Ride experience. However, I’m not a petrol head. To me, it’s an entirely different language, and I stick to the presets. But if this is your bag, you can fine tune your beauty into a track beast.

Ultimately, that’s all I can really say about Ride 3. Considering I was very intent on being negative about it, because it was initially difficult, I was going to lowball it. Scratch the surface though, put some time in, and it becomes a highly competent racing sim.

Visually, the bikes are stunning, as dynamic lighting and weather effects reflect against your ride. The same can’t be said for the tracks though. Whilst faithfully recreated to scale, they serve as a means to race on rather than eye candy. The bikes are the star here, and Milestone want you to notice that.

My biggest gripe though, is the audio. The menu music has this extremely grating Imagine Dragons-like vocal loop that made me want to gouge my ears out after five minutes. The same can also apply to the smaller bikes, too. Unless you’re a fetishist who loves the sound of a 2-stroke 125cc bike redlining its engine, you will find it an audio assault.

Overall though, I would highly recommend Ride 3. As mentioned, it’s definitely a game geared for the bike enthusiast. Newcomers might find it initially jarring and inaccessible, and Ride is fully aware of that. It could have benefitted from helping you near the start instead of making the player seek it out, but it’s not a deal breaker. Like Forza, there is a rewind option to use in game, but it shouldn’t have to be relied upon so heavily once you get used to it.

As well as career and quick race modes, you have online multiplayer and daily challenges to bulk out the competitive experience. Online stat tracking also lets you see how you compete against friends and other racers worldwide.

So, this is a recommendation, with a warning. It takes a while to get used to, and is unforgiving as you start, but dig deep and Ride 3 becomes a faithful recreation of the thrills of motorbike racing.

Ride 3 is available now on PS4 (reviewed on base console), Xbox One, Steam and Microsoft Windows.