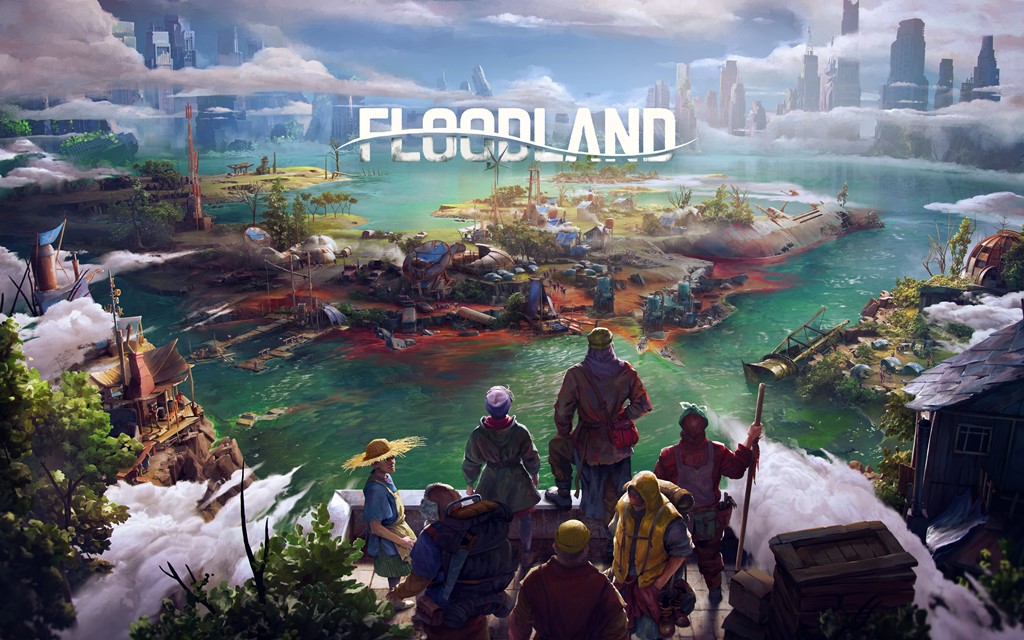 Floodland is settling down nicely ahead of its November release date. The Finger Guns Preview:

Towards the end of 2021, a delightfully enjoyable colony survival sim called Surviving the Aftermath released on PS5. I picked it up after having watched the trailer and was hooked, right up until I earned its platinum a couple dozen hours later. There’s just something intrinsically satisfying about turning a makeshift camp of desperate survivors into a thriving community. Having had such a great time with it, I was particularly enthused to give Floodland a whirl off the back of my foray into post-apocalyptic survival sims.

Vile Monarch provided an hour long demo to try out ahead of its November release and while it only scratches the surface of the potential for what’s going to be on offer, this early sneak peak has whetted the appetite superbly.

First things first, Floodland is a colony sim and strategy game. You start off by selecting your preferred clan of 4, each of which have their own approach to what kind of colony they’ll expect you to run. Select an autocratic, science focused clan and you can expect unrest if you’re too lenient or kind, for example.

For the demo, I gave the Berkut-3 clan a go, who were rather unimpressed by my tendency towards forgiveness when members of the group acted out of line. It’ll be an interesting setup come the full release, as your selected clan may require you make decisions and play in ways that wouldn’t typically suit your personality.

Random events will trigger infrequently, demanding a decisive course of action to be taken. Wildlife stealing food, fights amongst the group, the usual suspects. How many varieties of events are on offer waits to be seen, but the ones I came across in my playthrough seemed complicated and deep enough to warrant a bit of thought, which was engaging.

Your clan leader will typically advise you of the “right” course of action in line with the group’s overall values, but you can of course go rogue and select whatever the hell you want. Speaking of said leader, they’ll also be the ones dealing out your objectives and guiding you on the path to certain survival… hopefully.

The laundry list of objectives you’re supplied with are typical fare for the post-apocalyptic genre. However, the map looks decidedly huge and there are systems that I haven’t had the chance to interact with yet, such as meeting other clans or expanding into the cities in the distance.

A couple of the tutorial hints weren’t especially helpful in showing how to effectively start running your fledgling camp, which caused a stalled bit of progress as I interacted with everything I could to figure out how I was meant to keep things moving along, but the systems work really well once you get to grips with them.

As the director of the clan, you’ll need to select areas for survivors to explore, forage and search for resources. Food, water, housing, production, medicine, even trash is essential for building new structures which will expand your communities’ operations.

On the regular difficulty, I found it struck a really good balance of demanding careful resource management while not punishing you too harshly if you screw up. At one point, I wasn’t producing enough water quickly enough, which caused the loss of a few survivors, but I was able to recover pretty rapidly.

I particularly liked how organic and intuitive it began to feel once I had a steady stream of resources coming in. Managing your population and how you put them to work in the various facilities will be your biggest challenge as you try and keep everything suitably resourced.

Through research, you can unlock a large selection of new buildings for your group, expanding production, communication, entertainment, the works. You’ll need to continually expand to find new searchable locations for research materials however, meaning you can’t passively wait to build the perfect new civilisation, you’ll have to be actively engaged and continuously thinking of new opportunities for growth.

I barely had chance to see even a third of what’s available in my 1 hour demo campaign. But the structures I was able to see in the research trees look like they’ll add a host of new systems and mechanics which should keep campaigns fresh for a long stretch. There was some waiting around for resources which had me speeding up the in-game clock, but on the basis of what I’ve played thus far, it’s a more hands-on colony sim compared to some others.

Other options like roads, interactions with other clans and a leadership counter for example were also locked out for the demo, so I’m really excited to see where those options lead in the full release. As I mentioned earlier, the map was sprawling and while it was covered in the fog of war, what I could make out amongst the clouds was enticing.

Presentationally, Floodland wasn’t the most PC-busting or jaw-dropping, but it has a clear and detailed aesthetic that I fully appreciated. The little figures of people running around collecting resources or sleeping under the stars were nice to follow, while the detail of various broken structures or rusted towers was impressive as I gazed off into the distance.

It didn’t run perfectly at this stage, with quite a few periods of low FPS and a bit of shuddering, but this is still a ways off release. Fingers crossed that’s sorted by launch, but otherwise it was a solid exhibit of what Floodland can do.

While none of Floodland was especially novel from the brief stint I had to play, it works supremely well and it’s shaping up nicely for its release. I’m even more excited now I’ve had the chance to try out its brand of post-apocalyptic colony simming. The mechanics look deep and engaging, its graphics solid and appealing and the story appears to be shaping up well with conflicting choices to make and unrest to manage.

Floodland is launching on PC via Steam on November 15th, 2022.

In order to complete this preview, access to a preview build of the game was provided by the publisher.