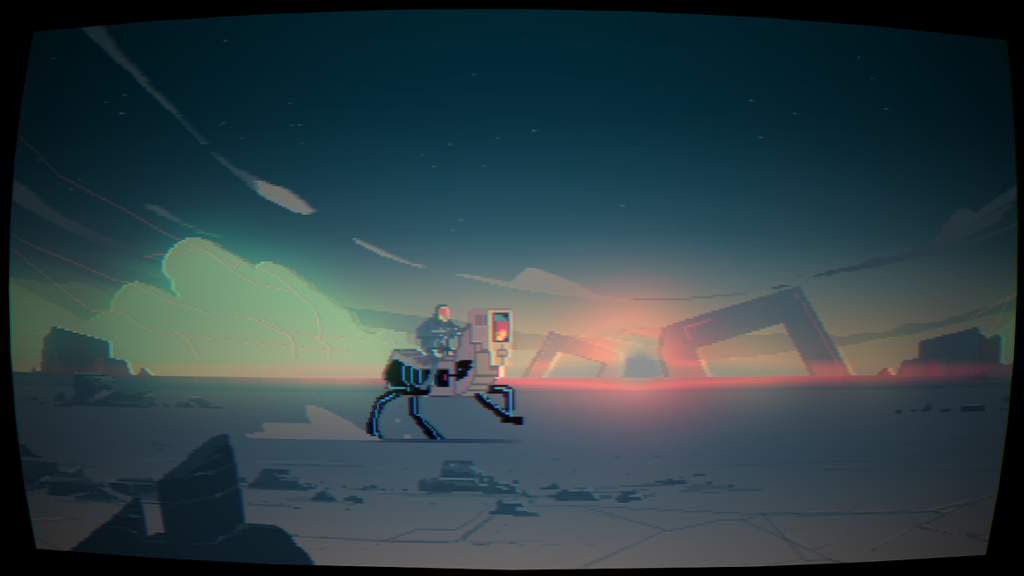 *Hotshots is a series of previews on our most anticipated indies, either glorious Kickstarters still in production, or indie devs with magic up their sleeves. We can't wait for these games. Hotshots is here to put them on your radar.

Narita Boy, developed by the tiny team at Studio Koba, realised its Kickstarter campaign and made a little extra back in 2017. They have been hard at work ever since bringing to life what to me looks like something incredibly unique. There’s a plethora of influences >

The plot is Ready Player One meets the Matrix, with a healthy dose of Dark Crystal, Bandersnatch and Tron. Lionel Pearl, reclusive genius and games designer, has created the Narita One console and the Narita Boy game. It’s the biggest thing to ever hit the eighties. Every kid has one.

But the console seems to also be a portal into the digital realm. With the boundaries between the digital and the real world breaking down, the game has become reality. Only you, Narita Boy, are capable of wielding the Trichroma Techno Sword and standing in the way of the Stallions (think digital badasses in robes) and their takeover of both worlds.

Narita boy is a thing of pixel perfect beauty, heavily influenced and probably right up the alley of anyone who loved Hyper Light Drifter, Fez or Sword and Sworcery: Superbrothers. Its got that vibe, that essence to its visuals and world design. It’s like bottled nostalgia.

It’s like the Matrix was made in the eighties. The concept takes elements of digital media and then transplants them into a magical realm, imbuing them with magical properties. You can use a hover-board, Back to the future style, but its made from a floppy disk (the ‘save’ icon for you Gen Zs). Other floppies give you power-ups and abilities. Old Amiga’s and other tech turn into horses and mechs and giant digital frogs. The Trichoma, something to do with the three colours available in the digital realm, is a magical substance made from their combination, like the Force in Star Wars. To someone like me, its like a wet dream of fantasy and digital magical realism that feels like the best of the Dark Crystal and Tron.

If you’ve watched the trailer above, and you are anything like me, you’ll have also noticed that music. Tense, swelling, orchestrated synthwave of the highest quality, with actual musical skill put into its crafting. It’s up there with the best of Disasterpeace (who did Hyper Light Drifter and Fez). Even more interesting, the composer, Salvador Fornieles aka Salvinsky, is the brother of the guy whose brainchild Narita Boy is, Eduardo Fornieles. Talent and vision really run in this family. If you want to check out some of his other music before Narita Boy releases, try his 2018 album Planets on Spotify.

Gameplay-wise its a tricky question right now: It’s a side-scrolling hack’n’slash, a 2D platformer with a Metroidvania feel, and a fantasy exploration puzzler, again evoking Hyper Light Drifter and Fez. It’s also got a hefty narrative, and sections that look like mini-games and chases. We’ll have to see come release exactly what genre it fits, but my guess is none of them and all of them at once.

Narita Boy is colourful, vibrant, full of hand-crafted animation, and has a concept and lore beyond even my fevered imagination. It’s got visuals a pixel art lover like me wants muralled on my walls. It’s already got a soundtrack I want to treasure on a collectors edition vinyl.

Though you can’t back the Kickstarter anymore, you can preorder Narita Boy and help Studio Koba make it a reality. Just visit their Kickstarter page. Narita Boy looks set to launch on Steam and Linux, but I hope it’s as popular as it should be and another few platforms become available. No concrete evidence yet of a release date, and the team is small, so we’re still expecting this to be at least a year away.

In the meantime, I wait with bated breath to wield the Techno Sword and get lost in this magical digital realm.