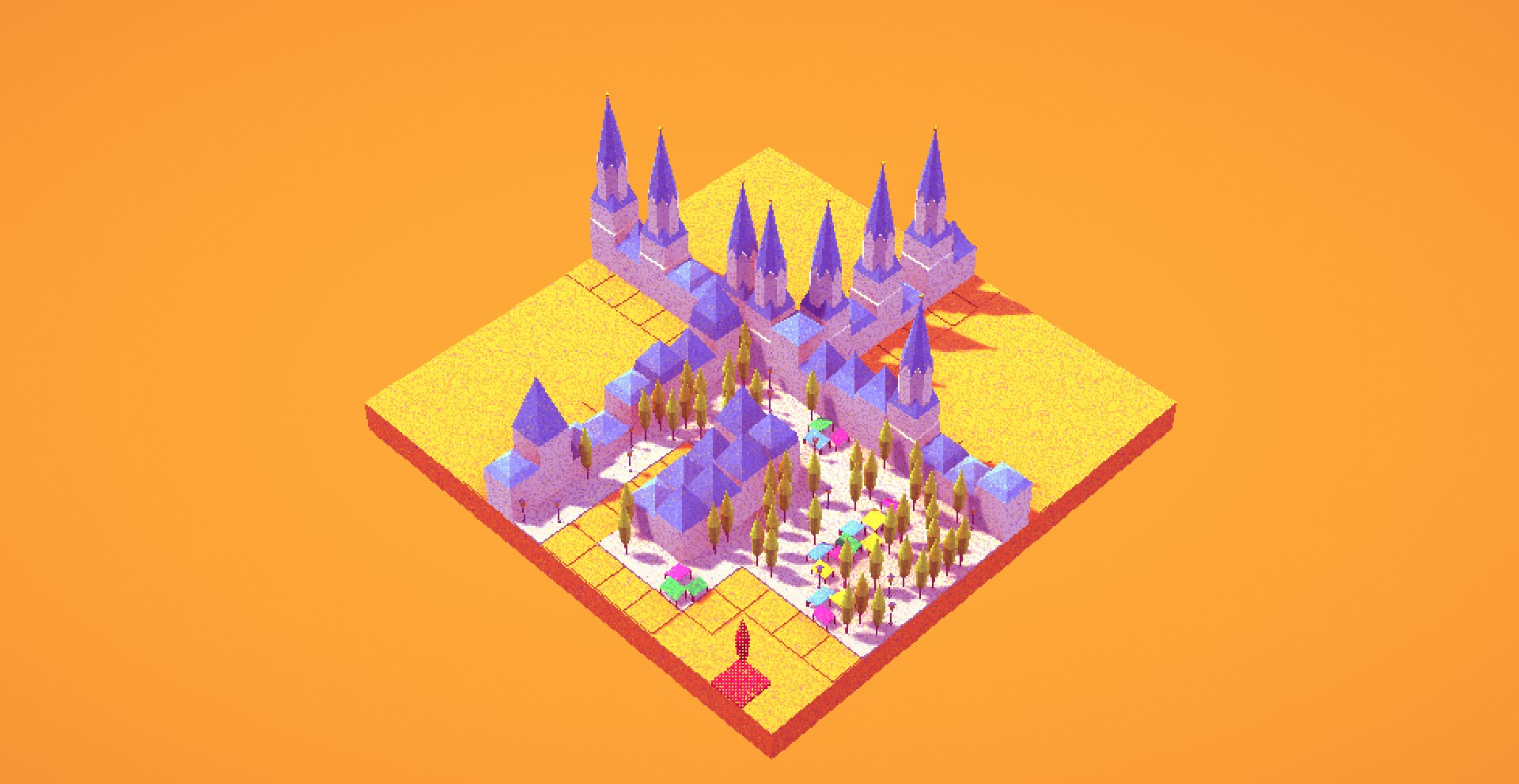 A bite sized construction game that's built up one square at a time, The Block is a chilled if short-lived experience. The Finger Guns Review.

Over the past few years, the “toys as a game” genre has exploded. No, I’m not talking about toys-to-life games. Instead I refer to the games like Townscaper and The Ramp, games that have no formal objective other than to be fun to play around with. The developer of The Ramp is specialising in this niche, as Paul Schnepf’s follow-up called ‘The Block’ [Steam] is similar in concept. Unfortunately, at least for this critic, The Block doesn’t quite stack up.

The Block is advertised as a tiny game, marketed as “the world’s smallest city builder”. It’s an apt description. The idea of the game is to place module building pieces on a grid-bound square piece of land.

The game starts you off with a randomised structure at the centre of the square, and you build outwards from there. You can build on any square that is adjacent to any piece of land you’ve already placed. The pieces you’re presented to place are randomised from a limited tile set, which you can skip through if you’re looking for a particular land piece.

You continue to do this until all the land is filled. At that point, the block of land starts to spin so that you can admire your creation. That’s it. You click. You place building blocks. Once all the space is filled, you start again. It’s a very simplistic experience that’s over in a matter of minutes.

That’s kind of the point of The Block. It’s the video game equivalent of a fidget spinner. It does one thing, just one thing, that you can sit down with and zone out to after a long day. There’s no purpose to it. It’s just something to mess around in and be a tad creative with.

The Block does its one thing in an appealing way. Each part of the world you click into place is accompanied by a cheerful chime and a satisfying ‘click’. The art style is clean and bold that lacks finer detail but makes for cool visage once everything comes together. The game also makes it very easy to play. It is very intuitive for such a short experience with the square of land automatically rotating to accommodate your clicks at times.

Ultimately, The Block is a game that give back what you put into it. There’s very little variety to it structurally. You can choose between 5 different map sizes that offer something a bit different in terms of what’s creatively possible; an XS map might be big enough for one building while the XL map can house a whole village. The style and colour pallette of the buildings on each map is randomised and isn’t customisable, so you’ll have to work with what you’re given. If you can take the tools here and think imaginatively, you’ll find some enjoyment. A small church surrounded by snowy fields. A series of medieval buildings with market-filled courtyards. A series of desert towers connected by a city wall. A field filled with trees. There’s some interesting things you can craft in a 15 x 15 grid if you put your mind to it.

Unfortunately, The Block stops well short of fulfilling its potential. That’s partially because of the way it sells itself. As part of the Steam store description, the game touts the ability to “watch your tiny city block come to life”. That’s a hypothetical ‘life’ because The Block is a lifeless experience. Those marketplaces you place? They’re just building blocks and once you’re finished, they don’t come to life. It would have been incredible if the city lit up with NPC characters in response to where you placed your world pieces. Instead, your block spins around. It’s a bit of a let down.

The Block is also dependent on your own creativity. After 25 minutes with this game, across numerous sessions, I’d personally ran out of ideas of interesting things to do with the space. I still returned to the game to give it a fair shake, trying to randomly place city pieces to see what shook out. It all just looked poor.

For those looking for a cheap and cheerful way to decompress after a long day at work, The Block can provide that. There’s a zen like vibe to the game that’s quite pleasing to let wash over you. The appeal for this game is limited however, even as a digital toy. There’s little longevity, not enough variety, and it stops short of fulfilling the potential it has as a city builder.

Compared to many other “games as toys”, The Block feels limited. It’s an interesting, tiny city builder that challenges you to make use of finite space, but it fails to capitalise on its unique hook in any meaningful way. That said, if you’re looking for something to play after a rough day to work, there’s a satisfying vibe to the game that’ll fill an hour.

The Block is available now on PC.