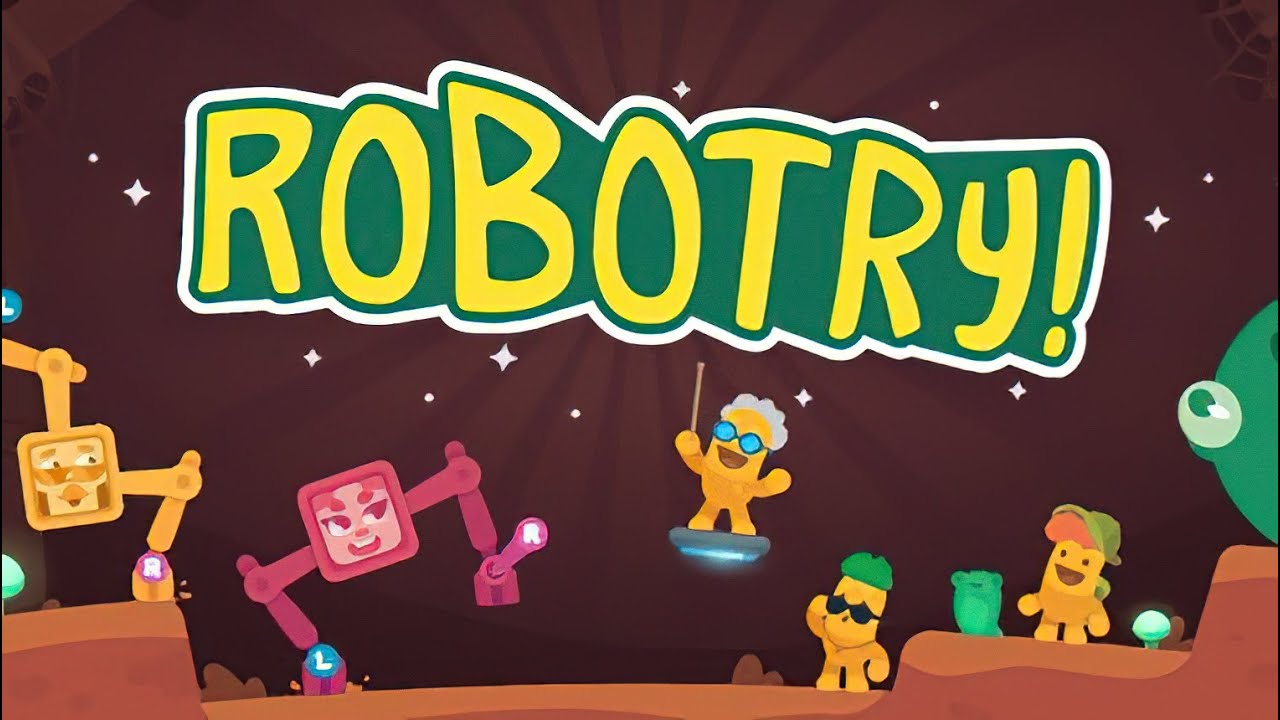 A platform/puzzler with an exceptionally steep learning curve, will Robotry deter those with little patience? The Finger Guns review:

There’s something so wonderfully charming about simple, rhythmic platformers. LocoRoco and Patapon, to name but two, aren’t in my top ten’s but they do have such fun gimmicks to them. Recently, the likes of Heave Ho! combine that simplicity with a puzzle mechanic, to make for fun-yet-frustrating little arcade games. So, when Robotry! swung into FGHQ, I was moderately intrigued.

Much like Heave Ho!, it utilises a gameplay mechanic involving swinging limbs controlled independently. Yet instead of grabbing, your legs are more akin to springs, requiring precision jumps and disjointed climbing in equal measure. It’s a simple mechanic in theory, anyway.

But is Robotry! more frustrating than endearing? Will it grow on players over time, or is it just too damn fiddly to be enjoyable? Let’s give it a robo-try…

One For The Reject Pile

Not that platform games particularly need a story, Robotry! at least gives players some preface to what they’re doing. I wouldn’t worry too much, mind. It’s not exactly one of plot twists, revelations and using trigger phrases to overthrow a dystopia.

No, it is merely, “You are a faulty robot, down to the reject pile with you”. However, determined not to find out where the photocopiers go, your little cube-like robo-avatar strives to get back on its feet and live. Aided by a cadre of diminutive scientists, misfits and technicians, your cubic self will make their way through various locales to… keep on living, presumably.

I didn’t see the story to its conclusion. Some might consider that lazy journalism, but I do have a very valid reason for it: this game isn’t fun to play.

The main gameplay tenet is similar to Heave Ho!, what with the independent left and right limb control. Yet the other game it shares similarities to is the streaming favourite, Getting Over It With Bennett Foddy. That game saw players steering Diogenes, a man in a jar, over obstacles with a hammer (yes, weird as it sounds).

But where that was one obstacle to manipulate, Robotry! has two. Legs, to be precise, each one mapped to a corresponding thumbstick. These extremities can be steered independently, in an attempt to climb, vault over or extend across gaps to and end of level goal. They can also be tensed like a spring, for jumps, or retracted to allow the robot thing to roll. All of it sounds really clever…

But much like Foddy’s game, it’s also absolutely frustrating to get right. Or to teeter on the edge and have one of your legs ever so slightly slip and send you backwards. Later on, there’s ropes to swing from, hence the Heave Ho! comparison, as well as grippy walls to traverse.

The other appeal in Robotry!, besides level progression, is saving the weird little… things populating them. These little bastards start off fairly innocuously, on a ledge slightly off the beaten track. But as levels progress, and you might expect, they end up needing some downright insane reflexes to get to them.

Bagging them rewards you with chips, as well as a currency that allows certain items to be unlocked. Things like hats and other accessories to customise your robo-reject. It all adds to a quaint little overall charm that hides its difficulty.

In fact, the whole vibe has a LocoRoco/Patapon style to it. From the simple, pastel-like colours, to the chill looping beats to get you moving. Characters all talk in a gibberish style akin to The Sims and whatnot, creating a downright jolly sense of a fun time.

In that regard, can’t fault it for adding itself to the ranks of “cute but deceptively hard” games, like OlliOlli World, let’s say. It’s just a shame the overall tone is one of frustration.

This would normally be the part in which I write the negatives, before trying to spin a decisive or positive conclusion at the end. Almost like a compliment sandwich in video game review form.

However, with Robotry! and keeping it short and sweet, I’ll combine that into one. You see, besides cutting down on my word count, I really didn’t enjoy this game. I wanted to, hence why I took it on for review in the first place. The trailer does a cunning job of making it look fast, fluid and fun.

It’s that just when it comes down to it, the frustrating moments don’t make it endearing. Endearing is, say, in Trials when you know you missed a smooth landing. It is not when your little robo-shit extends a leg at a fraction faster than normal and interprets that as an involuntary pole vault attempt.

For all its charm and colour, Robotry! just wasn’t doing it for me. That’s not to say it’s a bad game, as my score will show, but there’s too much annoyance (in my opinion) to make it a fun one. But then, if you’re one of those gamers that enjoys daft speedruns or “Impossible modes” in games, you might find something to grind your teeth through in here.

Under the guise of cute charm, Robotry! instead reveals an unfairly punishing logic-platformer. When (and if) it clicks, it can be fun. But the frustrations outweigh the good times, and can only be recommended for the hardcore masochists.

Robotry! is available now on Nintendo Switch (review platform), Xbox One and PC via Steam.