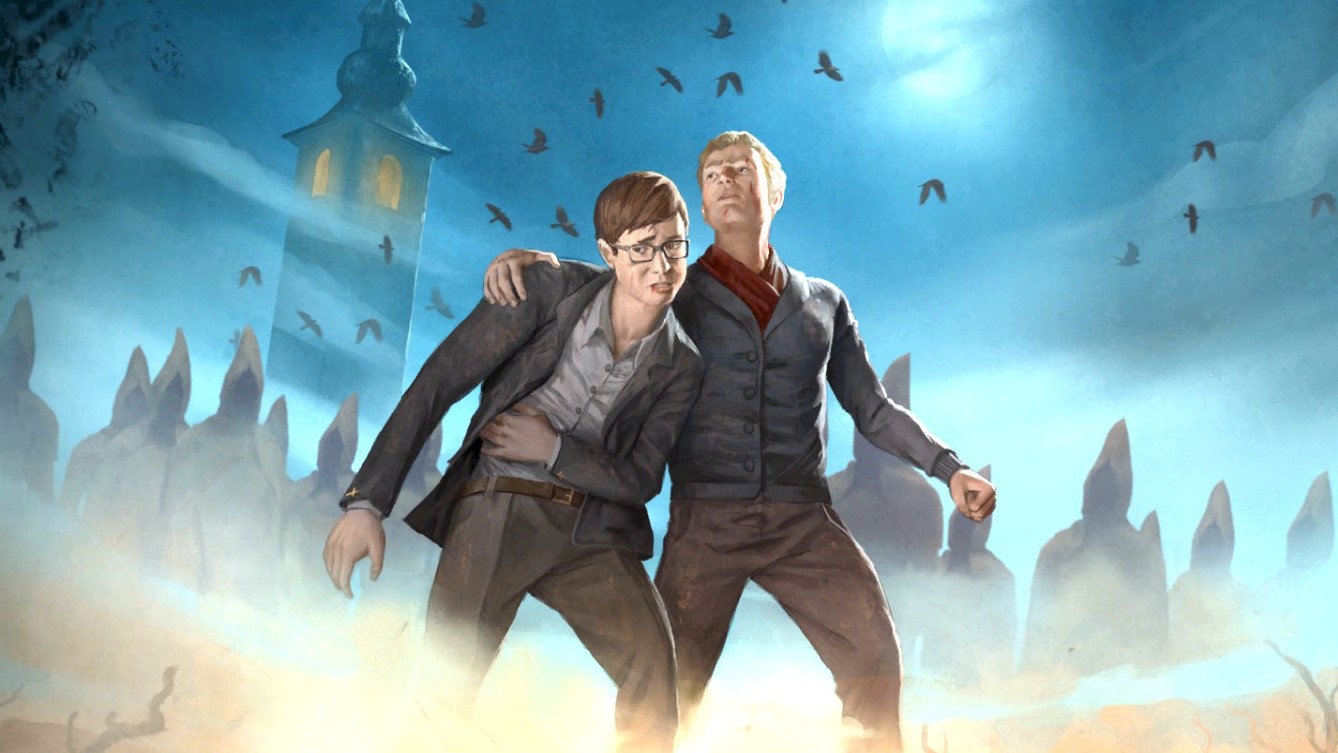 A murder-mystery, cult-based affair, Saint Kotar mixes point-and-click with religious shenanigans. Is it full of faith, or a load of fallacy? The Finger Guns review:

I feel like I should preface this review with a bit of background: I’m not a habitual point-and-click player, nor am I one for religion. I’m not an atheist, more an agnostic; as in “I’ll believe it when I see it”. So, playing something like Saint Kotar, a point-and-click with religious plot devices and undertones, might seem out of place for me.

But then, I have played the occasional pseudo-religious title that does leave me open-minded as a framing device, not a conversion tool. Saint Kotar is an odd one, following a priest and his brother-in-law on a manhunt/murder-cult plot thread through Croatia. It’s dark, it’s pretty trippy and has some genuine Broken Sword levels of convolution in its puzzles.

However, it’s as unpolished as a handrail on the Titanic. With that in mind, let’s go bash this bible-baiting, faith-taunting trip to the countryside. You have been warned…

Saint Kotar starts as it means to go on: oddly. Our scene is set with a young Benedek, one of a couple playable characters, being locked in a basement for blasphemous acts. Talking to another child, in fact, as it transpires the father is one of those “devout” types that keeps the family in line through scripture. We meet Viktoria, Benedek’s mischievous sister… and that’s our framing device.

Cut to the present, wherein we find an adult Benedek and his brother-in-law Nikolay awakening in a gloomy lodge. Both suffering with nightmares, Viktoria seems to be out and about, spurring a hazy recollection of what’s happened and where she might be. A few logic puzzles later and the two discover a gruesome murder, a sense of cult-like fear around the town of Sveti Kotar and the implication that Viktoria is involved.

The police don’t like you, the townfolk don’t like you, and the whole vibe is one of oppression and subjugation of the spooky kind. Benedek and Nikolay feel they need to prove Viktoria’s innocence, the various inhabitants distrust them intensely, but that’s not all the story leans on.

The religious aspect in Saint Kotar wasn’t some exaggerated angle by me, by the way. It’s rife here, and not just as a motivation for whatever evil forces are behind the story (which I won’t spoil). Benedek is a priest back home in Budapest, and boy does his faith come up a lot in just about everything he says. Every retort, every defence and just about every denial, too, fall back on his faith.

Which, as it turns out, is one of the story’s strongest elements, for better or worse. Benedek’s convictions will be tested and strained as events unfold. Finding bodies hanging from trees, or piles of, wavers his belief that things aren’t by-the-Holy-book here. The locals are all perceived heathens, yet to them that’s their lifestyle being tested by this evangelical outsider.

As a non-religious person, I can’t say any of it is relatable, per se. However, it’s not the first game to use religion as a tool, good or bad, or narrative device so I can roll with it. Benedek can’t, as it threatens to derail his faith and family with what freakishness transpires. If he can just get to grips with navigating the environment first.

Usually, when I think point-and-click, I think… literally that. Players have a cursor, they’ll click on something and the player character will saunter/jog/whatever contextual movement will take them there. Or interact with said clicked object or point of interest. In Saint Kotar, however, it’s a different kind of interaction.

Either character moves with the left stick, with running or walking toggled with R2 (on PlayStation). Trust me, you’ll always want to have running on. So in that regard, you’re free to explore the landscape, or so it would seem. However, it’s when it comes to selecting items that things get a bit daft. You can’t just rub your face against walls and objects mashing X for something to happen, for example.

Instead you have two options: using left and right on the D-pad to select an interactive object, or hold L2 and bring up each one. Honestly, it’s as needless and convoluted as it sounds. Largely because clicking something will make the playable character run/walk to it. So it makes traversal with the left stick redundant, as all it does is bring you closer to something that you have to select to interact with by a different means.

It’s a weird hybrid system, but does it not matter if the game is so visually appealing? Err…

What’s the nicest way of putting it? Saint Kotar looks like a shovelware game you used to find in Woolworths for the Nintendo DS. Or one of those naff freeware games you can get on PC, the dime a dozen ones. Now, I’m not adverse to fixed camera angle/pre-rendered backgrounds. I cut my teeth on Resident Evil, so I’m more than familiar with it.

Yet times have moved of, games are bigger in scope… whereas Saint Kotar hasn’t. Point and click games, to be fair, don’t need to be overwhelming and big-budget affairs. But there’s got to be a middle ground where it’s actually pleasant to look at. Perhaps it’s fitting that Sveti Kotar is a place of oppression, as that’s how the presentation made me feel.

It doesn’t help that the voice acting bores me to tears either. Again, I’m aware it’s not an all-star studded cast of recognisable talent. I’m aware that things are bleak, so no one’s going to be all jolly and whatnot. But… make me invested, please. It just sounds like the available talent are reading from different scripts, in different rooms, on completely different days of the week.

It is hard to get invested in something, even a gruesome murder-mystery, when those involved sound like they want to break for lunch and/or a nap after they’ve finished their sentences. Lines, I mean, not punishment.

The funny thing is, there’s actually a trophy for hightailing it out of there the first chance you get. I did it, not for the trophy, but to see if it works. It does, and is consider that the best ending, if I’m being honest. Why is it I’m so down on Saint Kotar?

It’s not the religious aspect, as previously mentioned. That doesn’t bother me, nor does the gameplay (fiddly as it is). It’s more that it feels so stale, so lackluster when it comes to progression that ultimately I just lose interest quite quickly. Hence why this review has taken so long: attrition. Some of the combine-item puzzles are either too simple that they’re insulting, or too convoluted to make sense.

The thing is, I did play and have respect for the likes of Broken Sword back in the day. I’m not new to weird logic puzzles, but there has to be the incentive to keep on pushing through. Whereas here, the story didn’t grip me enough to want to get through some of the logic.

To summarise, I wouldn’t say Saint Kotar is something for me. However, if you do like your stories dark and your puzzles weird, then this could potentially be up your Sveti. It’s been hard not to spoil the story, but there were a few moments that had me intrigued to continue. But then, there were also moments so weird, so Twin Peaks-esque that it just threw the pacing off.

Had this been released a few generations ago, alongside Shadow of Memories or Koudelka, and it would fit in nicely. Yet in today’s “standard”, Saint Kotar manages to both try too hard to be edgy, yet is so bland in its execution that it just failed to stick any one particular momentum to want to continue with it.

What could have been an interesting premise about religion, murder and cults, soon devolves into a bland and uninspired point-and-click. Saint Kotar has some originality with its faith-testing plot, but ultimately will only really appeal to die-hard fans of the genre.

Saint Kotar is available now on PlayStation 4 & 5 (reviewed on latter), Xbox One and Series S|X, Nintendo Switch and PC via Steam.