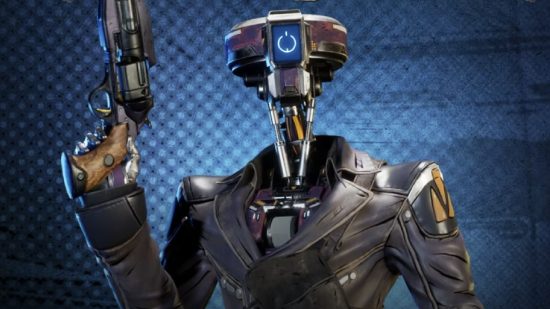 Unlike its predecessor, New Tales from the Borderlands can't hold a candle to its legacy. Find out why in the Finger Guns review:

TellTale’s Tales from the Borderlands is perhaps their magnum opus. The story of a gang of ragtag idiots doing whatever it takes to survive in the brutal lands of Pandora stands up to any scrutiny you can imagine. Some say The Walking Dead is the best series in the glorious TellTale canon. Some say it’s the second series of Batman, some idiots even proclaim Guardians of the Galaxy is the greatest achievement. They’re all wrong, it’s Tales from the Borderlands and that a sequel was coming made me giddier than a tiny happy robot voiced by Ashley Johnson.

Unfortunately, New Tales from the Borderlands is a misguided, one could argue even ‘bad’ follow up to one of the most enjoyable game narratives in history.

And that’s me being kind. Yes, in my heart New Tales was always going to be up against it. That this isn’t being made by the original creators was the first red flag, but I gave Gearbox the benefit of the doubt purely because they had recruited some former TellTale folk to see this one through. Annoyingly though, not the correct ones, it would seem.

If you’re new to the series – and for love of God do not start with this one – Tales from the Borderlands is a narrative-driven interactive adventure, its gameplay the famous TellTale way offering a variety of light and often very heavy decisions to get your characters over the line. There are a majority of endings and your choices for the characters will ultimately allow you to see how your choices played out, and how they compare to other players around the world.

Whilst TellTale Games themselves got enormous (so enormous they ran completely out of money and had to close in 2018) with ‘TellTale’ versions of Game of Thrones, Minecraft, Marvel, DC and much more, Tales from the Borderlands was a genuinely fantastically executed seven and a bit hours of pure joy. New Tales feels, acts and plays like a cash-in for a company running out of ideas for their global franchise and looking to resurrect their greatest spin-off. It hasn’t worked. The original is the best Borderlands game ever made. Its sequel is a cry for help. They clearly have no idea where to take this franchise next, throwing everything at the wall and trying out everything that stuck.

If you’re so inclined, New Tales from the Borderlands treads familiar territory, but this time with a brand new set of characters that can’t hold a candle to the chemistry of what came before it. You’ll play as different characters over the course of this long, long experience (it’s not that long, it just feels it) and you’ll barely learn a thing about any of them as the heart has been fully removed by Skags and thrown into the nearest loot box.

To compare it to the original is inevitable, but to look at it from its own merits, there are moments that remind you that this is supposed to be set in the same universe as its predecessor. Your primary three characters: Octavia, his scientist sister Anu and Fran, who loves her some blood. They’ve got a robot pal named LOU13, who definitely isn’t Gortys. Hell, LOU13 isn’t even Loader Bot. It’s up to the team to save the world from the terrors of a megacorporation that’s absolutely not meant to be Hyperion and safely secure a healing crystal.

You switch control between the aforementioned three as they do different things in the story: anxious pacifist scientist Anu, her (heavy air-quotes) street-smart adoptive brother Octavio, and bloodthirsty fro-yo shop owner Fran. For reasons I won’t go into, the unlikely trio team up to steal a healing crystal from a vault, try to monetise their discovery, and eventually save the world from both the bloodthirsty head of the Tediore megacorp, and a strange entity living inside the crystal.

So what’s good about New Tales from the Borderlands?! Well, the visuals are lovely. Everything has that glorious Borderlands comic-book colouring and it’s all bright and breezy, which is nice. The voice acting had a mountain to climb to live up to the original and whilst the new cast are particularly good (Fran is MVP in this regard), it never hits the heights of Troy Baker, Laura Bailey and Ashley Johnson at the very top of their game.

Speaking of Troy, Rhys makes an appearance here but it’s… just weird. It’s not the Rhys we love. It’s Borderlands 3 Rhys and it’s just a bit awkward. Like bringing back David Tennant to appease fans for a quick nostalgia dopamine hit. Who would do that?

And well, that’s about all I enjoyed from New Tales from the Borderlands, which is such a massive shame as I was hugely excited for this one to land, as anyone who knows me knows the original is genuinely in my top five games of all time. Gearbox have given it the old college try but without any of the heart or comedy that sailed through the original.

It’s just not funny, and that’s the biggest crime of all. Hell, this entire website is named after a scene from the original because it is so utterly ridiculous and hilarious that it stayed with me. New Tales isn’t memorable, nor did it satisfyingly conclude once the credits rolled. You know those cool character introduction screens when you meet a new character in, like, every single Borderlands game? They’re here, but they’re rubbish. Like they suddenly forgot how to do it. I have no idea how this was dumbed down and so poorly executed. This is the developer that makes Borderlands! What’s going on?

If you can take anything from this review and from New Tales is that there’s a treasure trove of episodic video games in the TellTale vault that you absolutely have to play if you haven’t done so already. Do yourself a favour and seek out the original instead of playing this. After coming off Tiny Tina’s Wonderlands I had a feeling Randy and his buddies were safe hands to see a brand new Tales in their wild world to the end.

Guess I was wrong.

New Tales from the Borderlands is a sequel that seemingly forgets everything that made the original so special and shoehorns in a story that simply doesn’t keep you engaged. Whilst it’s visually lovely and feels like it’s a Borderlands experience, it’s all style and no substance. Without heart or humour, this feels like a cash-in, and for a sequel to one of the greatest narrative games of all time? That’s just not good enough.

New Tales from the Borderlands is now available on PS4/PS5, Xbox Series S/X, PC (reviewed via Steam) and Nintendo Switch