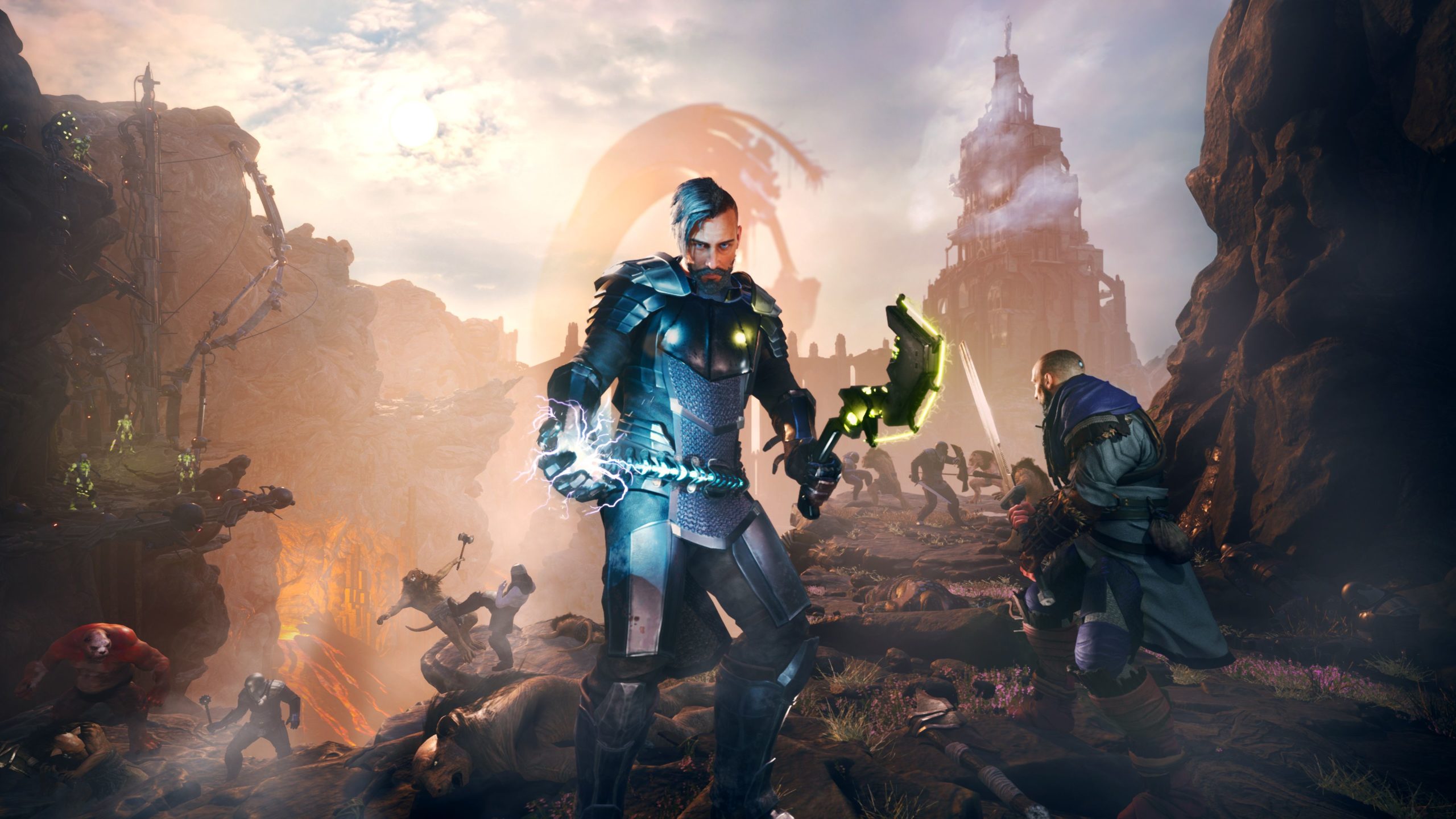 An action RPG that offers a multi-directional story, does The Last Oricru do much else, or is it one to be forgotten? The Finger Guns review:

When it comes to action RPG’S, we’ve had a pretty broad spectrum of worlds and settings to get used to. There’s been the medieval/fantasy with Dark Souls and Lords of the Fallen, with others in between. The sci-fi gamut has had The Surge and Hellpoint, to name but two. But until The Last Oricru came along, we’ve not really had a blend of the two.

Oh sure, we’ve had a theme blend like this before, if anyone had forgotten Too Human. Yet that was guns and sci-fi based on old fables, as it were. The Last Oricru is different, trying to mix a science fiction mystery with a fantasy story about warring humans and anthropomorphic entities. Like Redwall meets Planet of the Apes, for odd comparisons.

Does it hit the mark, fitting in amongst the ARPG annals, or should it be the last attempt at this kind of thing? Bear with me as we try and untangle this mess.

This is normally where I’d summarise the story of a game, albeit trying not to spoil it and hook you, the reader, in. The problem is that even after hours with The Last Oricru… I’m still a bit lost with it. But I’ll try and lay down the basic gist, at least.

The game starts with you, Mr. P Tagonist, awakening in a cryopod as a Necron from the Warhammer 40K universe stabs you. You then wake up in some ancient monastery, where it’s explained that you can’t die. Well, you can, but you’ll come back to life. Very on the nose and not-subtle way of throwing the repetitive ARPG mechanic into story, game.

After being dubbed “Silver” by one particularly grumpy monk, we’re given a few plotlines to get our heads around. First, there’s the human-like Naboru and the rat-folk, who has a slave-resentment relationship going on. Then there’s the Queen and her army, come to thwart the monastery. Oh, then the Ratvolution (their words, not mine) kicks off again and we travel to a fortress. It reminded me somewhat of Little Big Adventure, as I didn’t know what was going on then either.

But back then I was younger, whereas now this is trying to be too diverse with its plots.

The brief that we were given about The Last Oricru was that it is a “multi-pathed narrative adventure”. In one sense, it is, given the aforementioned Ratvolution and the Naboru. Silver can make decisions that will affect the outcomes and reputations of either side, encouraging the replay value of the game should players want to see all the outcomes. The problem, though, is that the writing isn’t particularly engaging and the voice acting is woeful.

I always feel harsh criticising someone’s performance, as this might be them trying to make their break. I’m sure Nolan North, Phil LaMarr and Tara Strong all started somewhere too, but they couldn’t have been this bad, surely? Even North’s “Cor blimey” Penguin accent is a far cry better than… whatever this English is here.

Silver sounds ridiculously posh, whilst others all sound like rejects from a Fable audition. Even the rats all have that southern droll, “Yes sir ol’ massa” vibe to them, really highlighting the slavery dynamic. If GoldKnights were on a tight budget and got their mates in, fair enough. If this was deliberate then… why?

So, premise and terrible dialogue covered, how does The Last Oricru actually play?

Oricru-ing a Lot of Damage

If you’re unfamiliar with combat in an ARPG, there isn’t really much too elaborate to explain. Unlike, say, the first Dragon Age or Knights of the Old Republic, it isn’t too stat-heavy when it comes to gear and combat. We’ll look at gear in a bit, after we’ve gotten the combat out of the way. Normally, this is what makes an ARPG fun, the meat of it and all that.

Surprising no one who isn’t expecting a masterpiece here, the combat in The Last Oricru isn’t great. It’s passable at best, if I had to be charitable. Players can equip various shades of hitting implements and shields, whacking and blocking routinely as expected. Rounding out the usual tropes is a stamina bar, because humans tire easily, no matter how immortal they are.

So, as you may expect, combat is that usual brand of swing, hit, dodge an attack, backtrack whilst you catch your breath, repeat. If this reads very nonplussed about it all, it’s because it is. It feels like placeholder combat: swing, hit, block. Unlike better contemporaries, there doesn’t feel like any meat to it, if that makes sense. There doesn’t feel like there’s any substance to it, like it feels a secondary necessity rather than the main point of your action RPG.

Work Smart, Not Hard. Or Change Them Round a Bit

So, the gear. Again, if it sounds like I’m just droning on about it, it’s not because I don’t care for reviewing. It’s just that The Last Oricru doesn’t add much new to the table in this regard either. Players will start off with the most basic of hitting sticks, picking up better and more advanced hitting sticks as they go. The same applies with shields, conversely absorbing more damage, and armour that does the same.

That bit is pretty rote, not much to really expand on here to those accustomed to it. What I did appreciate are the accessories that allow some stat alterations. So, say you’ve got a nice, beefy sword that you want to use but your strength is too low. There are certain rings that will divert points from say, dexterity to strength, meaning you won’t tuck and roll as far, but you’ll wield that chopper.

It adds a nice little twist to tide players over until they can put points in said stats. Or, if they know there’s a boss coming that’s invulnerable to magic, a temporary boost is available. It’s a fresh, if negligible mechanic, otherwise there isn’t really much that separates The Last Oricru from any other APRG.

Whilst it’s normally unfair to gauge a game on a few screenshots, the above should be able to give a realistic representation of how unpolished this game is. Bare in mind, this isn’t running on an out-of-date PC, this is being reviewed on a PlayStation 5.

Whilst there are some decent looking skybox views in The Last Oricru, the up-close-and-personal presentation is an unrefined mess. Character customisation is limited, with Silver looking like a badly dressed Action Man in his armour. In cutscenes it’s worse, as his beard seems to be at odds with where it should rest on his face.

NPC’s are worse, occasionally T-posing or just not facing the correct direction for conversation. It’s almost like GoldKnights tried to ape its betters, and ended up copying Skyrim to the point of its bug and oddities too. Contextual prompts just felt like a chore to line up, so instead of engaging characters I’d end up jumping up and down in front of them a few times first.

Whilst I never came across anything major, in terms of hard resets or crashes, playing this always felt like something was about to happen. The game autosaves enough to make you think it might also be unsure of its own stability.

Whilst it may seem like a copout to not want to expand on this review too in-depth, it boils down to one simple facet: I just don’t want to. I don’t feel enthused to keep at a game with such terrible dialogue, direction-less objectives and overall jank to it. The most polite thing I can say is the voice acting sounds like a rejected Fable table reading, but even then that’s a back handed complement.

Toby and I tried the co-op, but even that just amplified the sense of, “I’m not really having fun with this”. The trophies tell us, rather elaborately, that multiple endings and avenues are available, encouraging repeat playthroughs. But honestly, I could care less about the squishie-faced Naboru or the walking, talking rats and their Ratvolution (still a dumb word). You can side with one, the other, or present a united front… or just play a better game. Like Fallout: New Vegas.

Perhaps down the line, The Last Oricru may get some TLC and become a more comprehensible game. But for me, a somewhat avid fan of ARPG’s, this one isn’t going to be seen through to completion. Silver may live forever, but this game certainly won’t on my hard drive.

Another drop in the vast ocean of action RPG’s, The Last Oricru brings nothing new to the much-treaded waters. Worse still, it lacks the refinement and polish to make it a barely passable romp, feeling as rough around the edges as Alpha Protocol did back in the day.

The Last Oricru is available on PlayStation 5 (review platform), Xbox Series S|X and PC via Steam.