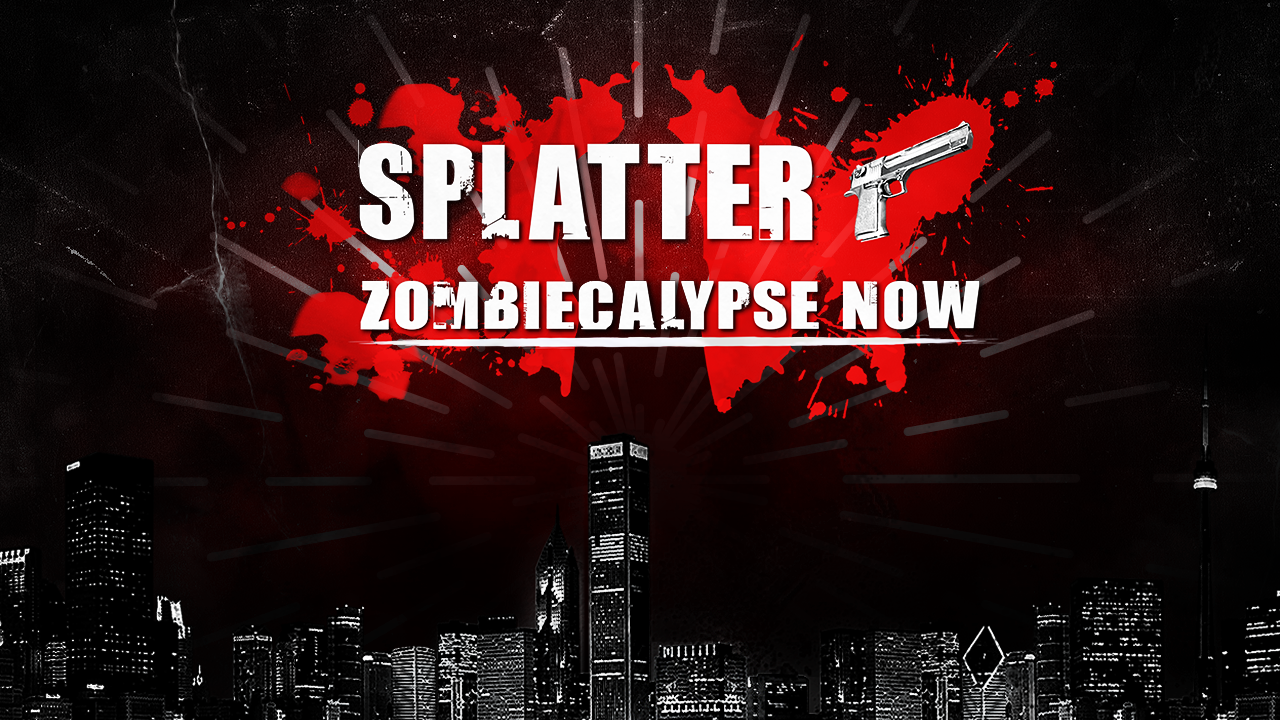 Splatter? Check. Zombies? Check. Imminent Apocalypse? Some might hope so after this. The Finger Guns review:

Splatter Zombiecalypse Now originally released on PC (Steam) in 2014. The year of the Luigi death stare in Mario Kart and Mark Ronson’s Uptown Funk featuring Bruno Mars being the Christmas No. 1. What does this have to do with Splatter Zombiecalypse Now? Nothing. But you can’t tell me the aforementioned don’t feel like a life time ago, so why bring it up in 2022? This is what I was asking myself whilst playing Splatter.

Re-releases after so many years usually consist of either a remaster or an extension to the original package of the game, but Splatter offers neither. It plays as a top-down twin stick shooter with a film-noir aesthetic. Since then we’ve had the likes of Enter the Gungeon and Xeno Crisis find perfect homes on the Nintendo Switch, sharing the genre with Splatter. So, should Splatter Zombiecalypse Now see the light of day (of the dead)? Or is it Zombiecalypse Yesterday? Maybe.

In typical noir fashion, Splatter Zombiecalypse Now opens with a voiceover from the protagonist Max. He’s edgy, badass and has a striking resemblance to Tommy Lee – Soul Patch included. We meet him at what appears to be the end of his journey, but to get there we’ve got to think back to that “bloody Sunday”. After the opening lines I could’ve sworn they actually got the voice of Max Payne himself – James McCaffrey – to play Splatter’s own Max, but alas after a few scenes of dialogue it’s clear it definitely wasn’t.

There’s a knock at the door, Max answers to a Soldier telling him to evacuate. Shortly after you find a gun and begin mowing down zombies. Max just falls into situation after situation from there on where he has no choice but to kill zombies, human sized toads and… worms. Like the ‘badass’ that Max is, he doesn’t question what’s going on with the world. Instead he makes a lousy quip and continues to obliterate zombies. The better parts of the story are when the levels open up and become more about helping other survivors. They don’t equate to any context as to what’s going on, and after beating it I still don’t know what just happened.

Dialogue skipped B and went straight to E-Movie, turning the cheese into Stilton, all of which is acted out emotionlessly. Cheesy one liners often have a place in games like Splatter that offer an almost Grindhouse cinema aesthetic. But what Splatter’s missing are the earnest attempts of creating something engaging and inherent self-awareness. Monotone and poorly written, the dialogue sucks the remainder of life from the undead. It explains the current moment as to what to do, but you’re left not knowing the reason of the outbreak, what the big bad at the end is, or even what happens in the last moments that’s teased from the start.

Yawn Of The Dead

Thankfully the story/cutscenes are minimal in comparison to the time spent playing the game. It’s beatable in 4-6 hours depending on the difficulty you choose, so it doesn’t overstay it’s welcome. It plays mechanically solid but it is one note in its execution. The overview on Nintendo’s website describes colours shift and levels shaking to the beat of the music, with enemies learning to adapt to your behaviour. I couldn’t tell if it was describing a different game or I just missed it, but none of that happened.

There are a variety of Zombies and Monsters in the game, all having their own ways of attack. From Romero’s Slow-Walkers to 28 Days Later sprinting Zombies, all are slain in the exact same way – takes steps back and fire at them as they line up for it. The biggest difference would be the colour of each monster, all looking like a bowl of Lucky Charms until they pop in explosive fashion covering the level in blood. The floors stay painted with the giblets as you progress through the levels. It adds to the overall grittiness of its edgy presentation, making the kills feel somewhat satisfying.

Through play, you quickly accrue an arsenal of monster mutilating weapons that can each be upgraded. These upgrades are tied to the money you find across the levels and if you’re playing them once through to progress the story, you won’t be able to upgrade it all fully. I guess this adds to the replayability but at the same time the upgrades didn’t make you feel any more powerful as you progress. You experiment with which weapons work best for the enemy type and you use them sparingly as ammo is limited. I opted for fully upgrading the pistol as it has unlimited ammo and I stuck to it for the most part as it did the job just fine.

I appreciated the attempts of Boss Fights in the game, as they break up the same gameplay loop of slewing hordes; but they’re probably the most lacklustre feature. They clip in to their surroundings, becoming bullet fodder and if they’re playing correctly, their health bars are so big it becomes more a battle of attrition than something of skill.

There are other modes and even online multiplayer. I hadn’t managed to play the campaign co-op during our review period but I don’t imagine it changes up the formula much – maybe more zombies to kill. It could be a fun game to play with friends as the peripheries of the package may fade out, making the comradery the main take away in Splatter.

Survival mode is wave based, throwing more and harder zombies at you as you progress. You take what you earn in the story with you in terms of upgrades, but it ramps up real fast, even in Round 2. Unlike other Zombie Horde modes, there’s no gradual progression in difficulty and instantly becomes a bullet hell – and when Max is quite the glass cannon you may not survive long.

In terms of story and dialogue delivery: As characters speak, a portrait in a black and white graphics novel style appears, similarly to Sin City. With the crimson splatter of blood being the only colour. This is also true with the cutscenes that are still like comic book frames. It feels very much like Max Payne… if his leather jacket was closer to his ankles and the fedora staying ON during zombie slaying.

The art design in-game is less distinctive than the cutscenes, making it look more generic. However, the lighting in the game is particularly impressive. You wield a torch that lights up wherever you face but outside of that you’re given a limited view of the surroundings. It’s atmospheric, teetering onto Survival Horror territory, though Max doesn’t scare easily. Guns popping, blood splatting and zombies grunting are all satisfying. That being said the default mixing of audio is all over the place. Rain drowns out most other sounds like dialogue and music. Whilst tweaking the different sounds in the menus, you’ll have to choose one over the other on what’s more important to you.

Hard fought combat encounters kick into high gear sonically with pounding industrial drums blaring as piles of zombies come at you. It feels like the popular action films of the 00’s – when it felt like the influence of The Matrix was palpable and contagious. I wish it doubled down on that, as other songs – like those accompanying the Boss Fights – have bland butt rock playing, really killing everything but the enemy.

That Explains All The Horrible Things I’ve Seen

Splatter Zombiecalypse Now is the same game as it was eight years prior. With its intentionally dated cheese of the 00’s and gameplay that has since evolved in others games; Splatter is a game I can’t find a good enough reason to justify its resurrection on Switch. It’s short but with a Survival Mode that could potentially lure players back for a few more hours, it could be a decent time and zombie killer.

Splatter Zombiecalypse Now feels lost in time. It plays solidly enough but it lacks innovation and feels dated, surrounded by better games in the genre on Switch. If you look past the presentation and concentrate on the modes you can enjoy, it could make for a decent evening of entertainment.

The Last Hero of Nostalgaia Review (PC) - Digisouls
Enroll Now! - A New Trailer for Two Point Campus Drops Ahead of Its August 9th Release
The Finger Guns Podcast Ep. 147 - Why Is There A Still A Gaming Stigma?