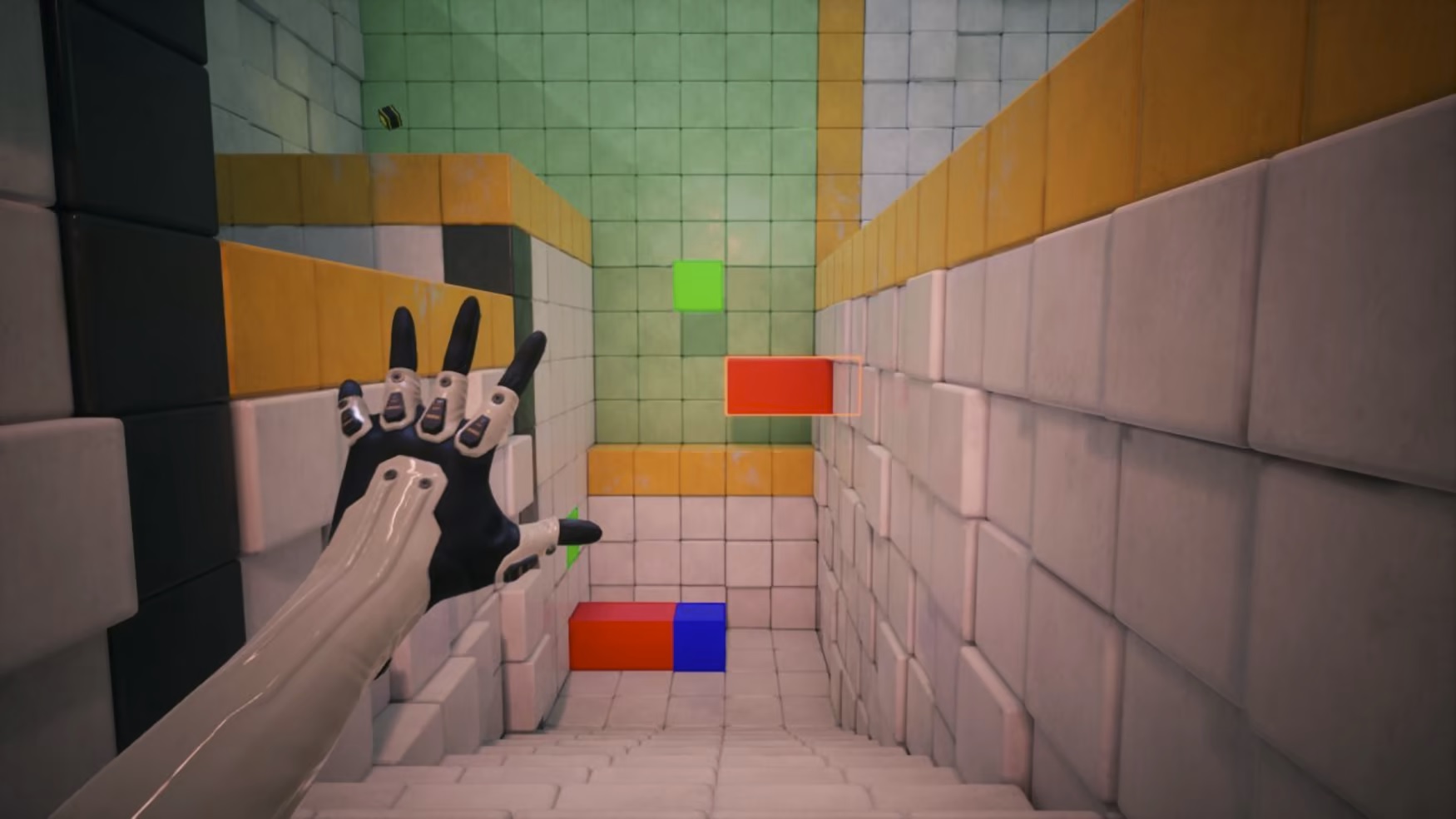 A ground up remake of the classic first person puzzle platformer, Q.U.B.E.10th Anniversary is a journey down memory lane. The Finger Guns Review.

It’s funny how memory works. When I first started writing about video games, over a decade ago now, Q.U.B.E. was one of the first big games I was ever asked to review. I was blown away. To me, this was the first-person puzzle platforming follow-up that the industry was craving after Portal. I remember it being stylistically clean and cool and with puzzles that tickled my brain with their creativity. The game has since stuck out in my mind as one of the most memorable from the early 2010’s.

The best complement that I can give to Q.U.B.E. 10th Anniversary [Steam Link] is that playing it feels like I’m playing the rose tinted version I keep in my mind, rather than the reality. When I first started playing the 2022 version, I though to myself “Huh, not much has changed”. Revisiting the original version quickly set me right. This game is a complete rebuild of the game while retaining most of the puzzle design, aesthetic and tone of the original. More accommodating to the player, less frustrating in places, much better looking and with additional content, Q.U.B.E. 10th Anniversary refreshes what needed to be refreshed and leaves the core intact, acting as an excellent celebration of the original Q.U.B.E.

Q.U.B.E. 10th Anniversary even recognises the fact that players will have arrived at Q.U.B.E. via different versions and for different reasons. When Q.U.B.E. initially released, it was a pure puzzling experience. There was no story – it was just head scratcher after head scratcher, back to back. Released a few years later in 2014, the Q.U.B.E. Director’s Cut introduced a narrative and changed up the pacing of the puzzles. Both versions of the game are included in the 2022 10th Anniversary version here, both receiving the remake treatment. No matter which version you arrived at this game, you’ll feel catered here.

For me, The Director’s Cut is the definitive way to play this game, especially in Q.U.B.E. 10th Anniversary. In essence, all this version does is put simple platforming puzzles between the self-contained complex quandaries of the original game. While you’re tackling the simple puzzles, you’ll hear a few vocal tracks from two characters, each attempting to convince you that the other is nefarious.

As much as I appreciate the simplicity and focus of the original game, the story adds a layer of purpose and drive to the experience. While the whole narrative is passive, little more than audio log collectables, it’s deceptively thought provoking. You’ll find yourself considering which of the two characters are telling the truth and which is leading you to disaster, and if so why. Narrative devices and structures have progressed a lot since 2014 but there’s still a little bit of magic in the Director’s Cut tale.

No matter which version of the game you play in Q.U.B.E. 10th Anniversary, the core series of puzzles are the same and they’re excellent. If you’ve missed QUBE until now: The general premise is that your character is wearing a pair of gloves which can interact with particular squares in the sci-fi environment. Each colour of square has different abilities. Red squares can be moved in and out from a surface. Green blocks spawn a cube which drops out of the wall. Blue blocks are jump pads when activated. By looking at them, you can activate the uses of these blocks from distance. The aim of the game is to solve the puzzles ahead of you in order to move through the 7 sectors inside this puzzle cube.

Each sector you move through in the game introduces a new mechanic to get your head around. Initially, you’ll just be assessing the coloured blocks to figure out in which order you’ll need to activate them. Soon you’ll be using purple arrows to rotate entire planes or levels of a puzzle. Then there are magnets which will draw blocks across a level. Eventually, you’ll get the ability to apply colour powers to certain spots. Each sector has a theme which introduces a new mechanic before blending it with everything that has come before it.

The difficulty curve of Q.U.B.E. 10th Anniversary is really well done. While the game barely reuses puzzle ideas more than once, the structure of the game means that you rarely feel out of your depth. The only times this game will trip you up is when you’re tackling the larger puzzles and you’ll have to try a bit of trial and error to figure out where to begin.

Thankfully, every puzzle that can become unsolvable in this game has a handy reset button. Press it and the puzzle will head back to the last checkpoint.

The New & The Vamped

Fans of the original game will find a few noticeable changes in Q.U.B.E. 10th Anniversary. The notorious light block puzzle which stood out in the original like a saw thumb as an annoyance has gone entirely. As part of the rebuild of the game, the puzzles have all been made a little bit more accommodating. For example, turning off magnets when trying to drop a block on another block will see the blocks stack perfectly if you’re close.

One potentially divisive change is the complete removal of the cable/wire mechanic from the game. Sector 6 of Q.U.B.E. has been completely redesigned without this mechanic, instead focusing on platforming and large fans to propel you around. I don’t know why this particular puzzle aspect has been removed – it wasn’t particularly problematic in the original game – but it’s missing here. I wouldn’t say this is an improvement, but it does speed up the last third of the game.

As part of Q.U.B.E. 10th Anniversary, Toxic Games have also included an additional 5 hour long chapter – Sector 8. I’ll be honest, this new content feels like it should have been part of Q.U.B.E. 2 rather than this remake. Many of the mechanics in Sector 8 are those you find in the sequel; pressure pads, light bridges and magnets moving balls are introduced almost immediately. For fans of the series, this will be a cool addition – more QUBE can never be a bad thing, right? I do wonder how new players will process so many new mechanics being introduced at once however. The mechanics are all reasonably intuitive, but it’s hard to argue against this Sector feeling totally separate to the main Q.U.B.E. 10th Anniversary proper.

The games industry and puzzle games in general have progressed a lot since 2011. It’s a testament to how progressive Q.U.B.E. was that even 10 years later, it doesn’t feel out of touch. The puzzle solutions are a constant stream of eureka moments that make you feel incredible as the game tests you to think outside the box. With a new coat of paint, Q.U.B.E. 10th Anniversary stands alongside its modern peers, many of which it likely inspired. For fans of the original, you might find some of the changes questionable, but if you’re looking to retread your memories of Q.U.B.E. in a way you remember them, this anniversary edition is a worthwhile purchase.

While some of the changes will be divisive, and the new Sector 8 content feels a little out of place, Q.U.B.E. 10th Anniversary is still an excellent celebration of a classic first person puzzler. Refreshing the visuals and tweaking the puzzles to remove frustrations, this is a great starting place for Q.U.B.E. newcomers and a pleasant jaunt down memory lane for long time players.

Q.U.B.E. 10th Anniversary is available now on PC via Steam.