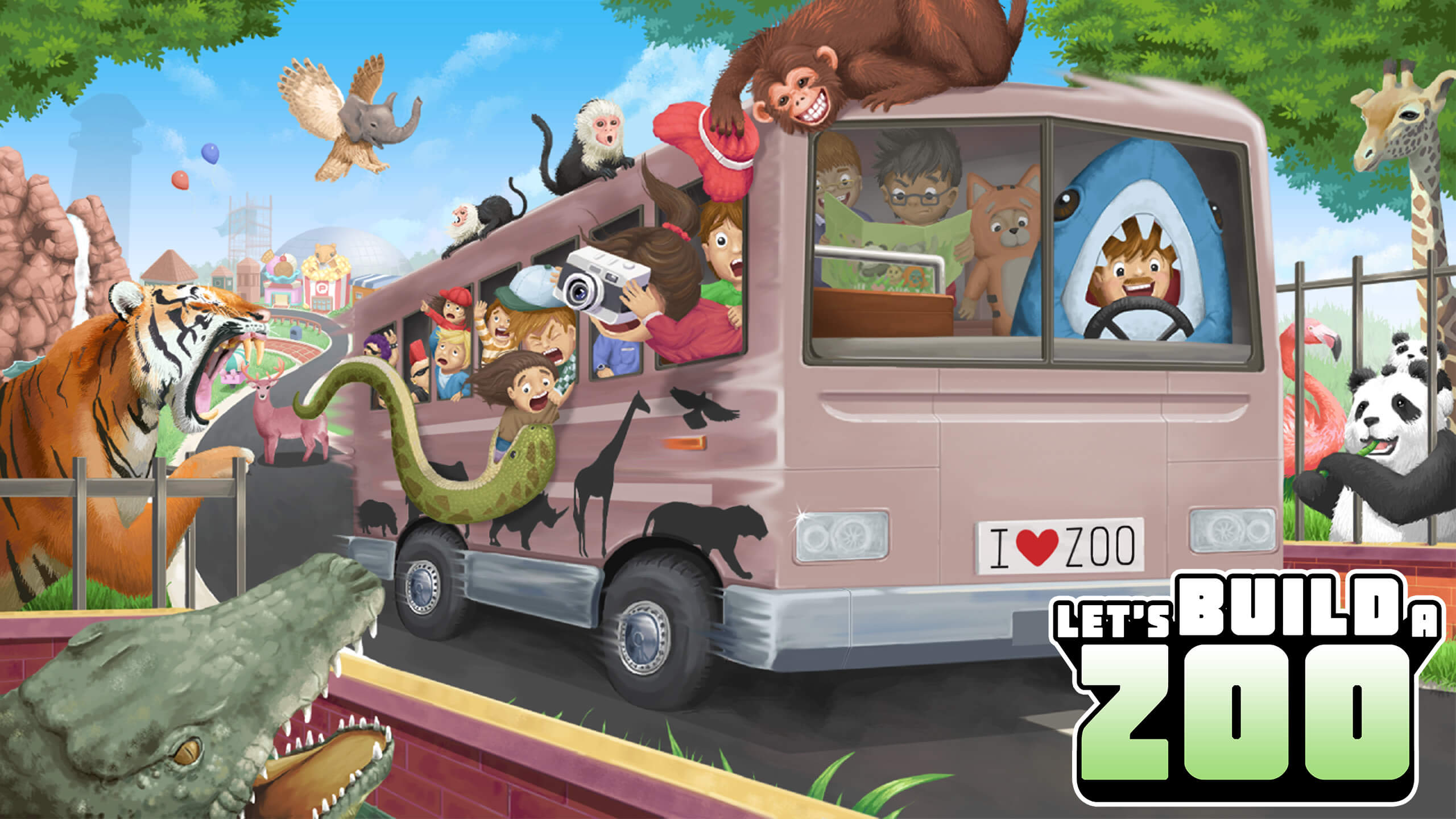 Let's Build A Zoo lands on consoles as well as gracing us the Dinosaur Island expansion. Is it worth building Jurassic Park? The Finger Guns review:

A Primer: Let’s Build A Zoo grants the opportunity to play a park builder in the same vein as those you loved in the 90’s like Theme Park, and simultaneously, the chance to act out the evil acts that the devil on your shoulder tells you to do to cute pixel animals (yes, we all know that voice is in there SOMEWHERE.). With its initial release on PC, our chief Sean dived into everything that you could possibly wish to know about this enthralling game here. Since his review, Let’s Build A Zoon has found a new home on consoles which comes bundled with the Dinsosaur Island DLC for the original game.

Getting Into The Gate

If you need some footnotes, then I’ve got you: Let’s Build A Zoo takes the retro-style of old school Theme Park, and adds a lot more gusto. Players are here to build and run a zoo from the ground up to success. Everything is customizable, from the type of animals you have, to the paths you build, to the amount you pay your staff. Everything, including being a morally corrupt human that PETA would have a field day over. Yes, that is right, you can choose to have the best zoo to ever zoo in Zootown, or turn your animals into bacon. In the additional DLC, you can hollow out your dead dinosaurs for small children to play in. It is devilishly fantastic.

It’s no secret that building style simulation games are tricky work on consoles. Something that works so smoothly on a PC mouse and keyboard doesn’t always translate to the handheld controller of the PlayStation’s square or triangle buttons.

You can really see the attempt to try and be as intuitive as possible with the console version. The wheel of functions, where everything you need to do is in one place, is the click of the back button. Your D-pad can smoothly scroll between each section or task that is needed to complete. As well as a cursor to be able to be precise with what you need, whether clicking on a patron, an animal or simply moving its bowl of water out the way because it’s blocking an exit. On the whole, the controls do translate quite well, but there are a few niggles that I guess is up to you whether you decide is avoidable or not.

The controller layout has you press a bumper button three times to pause the map. This could have maybe been mapped better, as sometimes there can be huge lulls in the game where you just need to let the zoo play its course. All of a sudden 3 or more notifications can happen where you quickly need to catch up. To continue to faff with speed over a number of hours is mildly annoying, although you get used to it can.

Similarly the ‘back’ button, marked as the circle on a standard PlayStation controller, is used to exit out of features, but pressed too often can pause the game. This is initially quite smart, but when moving quickly I found myself constantly pausing and adjusting the sound of the whole game for some reason. After a while you do get used to moving very quickly, the bigger your zoo, the more there is to manage and so accidentally pausing in speed and then adjusting volumes can get a bit on your nerves. It is something that I hoped would die out, but even 20 hours in, I catch myself doing it when I need to do multiple things at once.

Sean mentions in his review a technical issue in the form of notifications stating he’d finished a task. I can gladly say that I didn’t see this issue, the only problem I encountered, albeit rarely, was the changing of the cursor. The cursor to guide you through the game is followed by a lovely rainbow trail of pixels so you can clearly see where you are pointing and clicking. Sometimes this would turn into a cursor I could barely see, and it would snap into place un-allowing me to click on anything specific but the pen in of itself. No matter what button I pressed it wouldn’t ‘snap out of it’. Eventually, by random I would get my magic rainbow cursor back. Nothing that is a deal breaker for the game, but a bit of a niggle nonetheless.

With all that said, everything else is translated pretty well and makes the game relatively easy to play with an attempt to use as little buttons as possible trying not to convolute the controls. It’s a hard task but one I think Springloader has done creatively and intelligently.

The Dinosaur DLC is a fantastic addition to an already great game and is much of the same set up as your original zoo. You can fly there while working on your current zoo, and with you you’ll take a small stipend to set things up. The different dinosaurs are discovered and gain entry to your zoo through a group of palaeontologists who you can pay to discover more variants of dinosaur. With 51 dinosaurs to discover and display in your zoo, there is a lot of digging to be done. From your favourite stegosaurus to extinct mammals like woolly mammoths.

The Dino Zoo follows the same formula as the base game, having different people task you with different things to achieve based on what you either unlock in the brand new research tree or just approach you with tasks to better (or not) your zoo. The research tree also includes dinosaur-esq buildings that can help or hinder your moral compass. From using a carcass for your children to play in unknowingly, to being the angel you are and breeding dinosaur eggs the right way. It would certainly feel like a cop out if all the buildings were the same, and they are not. They are completely new compared to the original zoo, with some same editions. Moral choices are still plenty within the expansion. The new campaign also details hundreds more decorations to make your Jurassic Park live up to the sights of the movie.

The only thing I did notice in this expansion though was a slight frame rate drop when zoomed out on massive zoo’s. Again, not a reason to not dive in, but something I need to mention. PlayStation 5 users should also not expect a trophy tracker. A common feature to PS5 games now, but one that only trophy hunters will notice.

If anything, the expansion feels much less pressured and I felt a sense that it is much more laid back than the base game. I rarely had red notifications; my dinosaurs were much less demanding than my ever-breeding rabbits or meerkats. I found myself enjoying the pace and spending much more time decorating and exploring the design side of building much more than I usually would with other sim games. The CRISPR lab is also involved, and for those not knowing what that is, it is basically a slice and dice machine that can clone or meld two different animals together. Fancy a Sabertooth tiger and Triceratops hybrid? You got it! What is not to love about this expansion? No really, I am asking because I have not found the answer.

Let’s Build A Zoo is just as wonderful on console as it was on its initial release on PC. As with any building management simulator, some controls will never feel completely intuitive moving from mouse to controller, and Let’s Build A Zoo is no different, but only in minor areas. The Dinosaur Island DLC takes all the highlights from the base game and amplifies them in a fantastic addition to an already extremely enjoyable game.

Let’s Build A Zoo with Dinosaur Island DLC is available now on PlayStation 4 & 5 (reviewed on latter), Nintendo Switch, Xbox One and Series S|X, and PC via Steam.