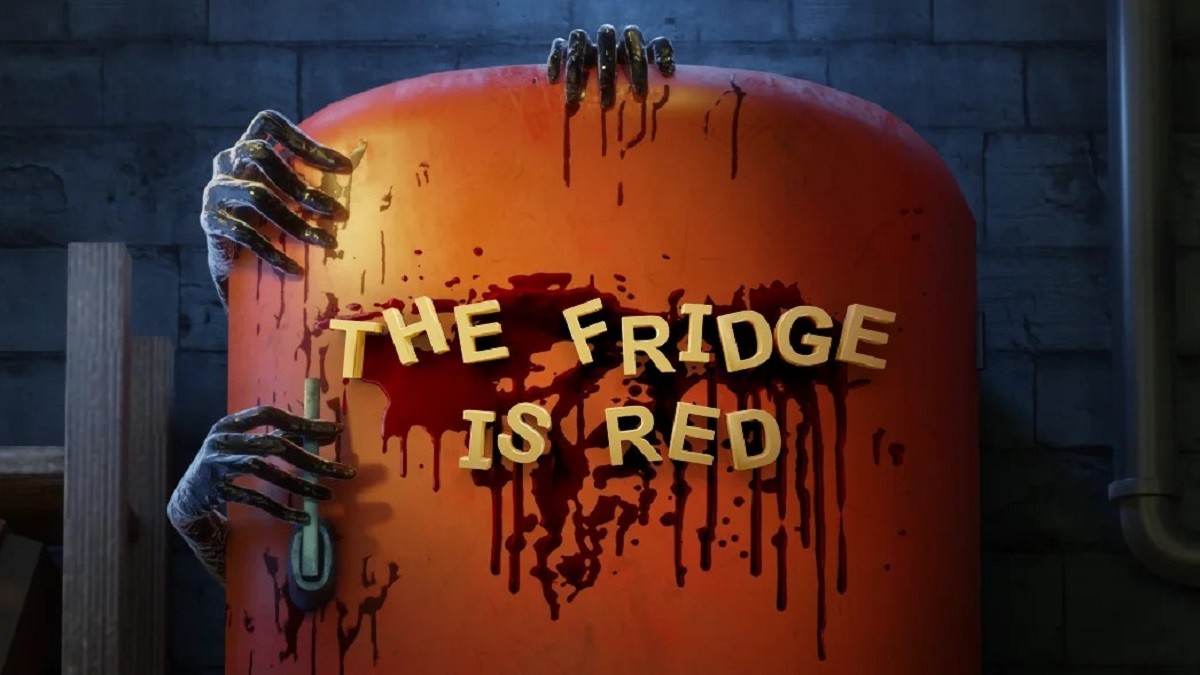 There's a fridge, it is indeed red. But it's also unfortunately faulty and defective. The Finger Guns Review:

The Fridge is Red. Remember this, because it’s about the only interesting thing in this “psychological horror” anthology game. While the titular fridge is indeed red, little else is as interesting or actually makes much sense.

That’s a pretty bold and blunt opening deriding The Fridge is Red (don’t forget!), but I wanted to be upfront that this “horror” game isn’t really worth much of your time. Imagine coming home after a long day of work, legs weary from toiling away, eyes heavy and burdened from hours of screen surfing only to open your haven of food, and discover everything is mouldy, your favourite treats are now celery and the drinks are urine.

I hope that gives you some vivid picture of how utterly disappointing The Fridge is Red turns out to be after a tempting opening. The promise of an appliance bursting with your favourite consumables reduced to a soul-destroying husk.

Alright, enough whining, let’s get into the nitty gritty of this refrigerated fiasco.

The Fridge is Red, to your probable surprise, actually has a really strong opening. Both initial levels “Fidgeted Sherri” and “For Daddy to Work” set a creepy opening, complete with a strange mystery, awesome PS1-era graphics and nervy goings on.

Red fridge is indeed scary as you set out to uncover why this tomato-coloured appliance is haunting your every move. Open a locker and blood comes spewing out then around a corner you’ll find a pixel-less figure moving in the corner of your peripheral vision.

Problem is, it then goes on to repeat these same tricks across it’s 6 available levels. Atmosphere and a nostalgic horror style can only carry you so far, there needs to be some variety in the shelves of this fridge. There’s only so many vanilla yogurts you can hoard before you crave something else to be waiting in the back for you to discover.

I was really disappointed that the initial tension it works so hard to successfully develop dissipates so rapidly once you get passed its first 30 minutes. It’s only a 2 hour game! How can it run out of steam that quickly?!

Part of the reason The Fridge is Red loses its luster so quickly is that the gameplay went past its sell-by-date round about a decade ago. With the exception of 2 levels, you walk around using WSAD and right or left click to interact with things in the environment.

Need to fix a generator? Click on it, done, no thought required. It’s one big busy work job as you walk about, pick up an item, walk to the next thing, press on it to make something happen, rinse repeat. It mixes up the gameplay occasionally with a light puzzle to solve or a threat to evade, but they’re so menial it poses no threat to your cognitive capacity whatsoever.

It’s like playing a walking simulator on autopilot, but with nothing tangible to really keep you going. Edith Finch has a great story, Gone Home an emotional theme to uncover. SOMA, a game released in 2015, even did walking sim horror much more interestingly than this.

The biggest issue is the lack of actual threat to compliment its fantastic atmosphere. Aside from two small sections, there’s nothing that presents an actual danger to the player. When it does try to introduce some risk, it falls flat when you just respawn with no progress lost or you can easily outwit the dumfounded AI.

Put Out to Pasture

In fact, the biggest barrier I ever faced in this game was my own idiocy. In one level you traverse a hospital. Obviously, going through doors leads you back on yourself and you’re supposed to figure out the pattern to reach the right place. Standard psychological horror fare, alright.

Only, I spend 20-30 minutes running around this damn place not knowing what I’m actually doing or following. Didn’t help I was carrying a baby with one of the most obnoxiously annoying sounds in gaming ever. I eventually did it, but by that point I’d clocked out of this game.

Another level has you driving around in a snowstorm trying to hit the highway but coming up against various issues. I still don’t even know if it matters which way you drive, as I could seemingly go the wrong way from what an NPC would tell me and still end up where I was “supposed” to be.

So, in summary, this is a walking simulator with going-through-the-motions objectives, no actual threat or stakes, remedial level puzzles and environmental design that’ll have you wasting dozens of minutes of your life at a time. Not really the best look, to be honest.

The saddest part of all this is that The Fridge is Red has some real highlights hidden inside an uninteresting game. At the end of each level you’ll get a short cutscene outlining what the place means to the character/family of the story. It’s pretty predictable, but the snippets of narrative are actually pretty good.

The PS1 style retro horror graphics are also awesome. The low pixel count and lack of detail works wonders to create a tense and brooding atmosphere. Complimented with some genuinely haunting locations and use of lighting, there’s an eerie Silent Hill feel the seeps out every now and then.

But then you have to play the game, and all of that just evaporates through a treadmill of boring tropes. The lack of any checkpoints is a nuisance as it means you have to see a level through to the end even if you desperately want to step away from wandering aimlessly around for 20 minutes.

I had a glitch occur on the driving level where the camera switched perspective and locked me out of doing anything, thereby requiring me to restart the level thanks to no checkpoint/save system. I clipped through environmental objects and other times got stuck on stuff that just plain wasn’t there.

In a horror game, some of that can work really well. Problem is, The Fridge is Red just isn’t scary and isn’t fun to play, which makes these issues all the more annoying.

The Fridge is Red has a great name, a wickedly creepy graphic style and a modicum of an interesting story. However, it’s promising opening is just sullied with some of the most by-the-numbers gameplay you’re likely to experience this year.

The only thing I was ever truly scared of was whether I’d die of boredom, disinterest, demotivation, general fatigue or all of the above from wondering this aimless universe. I really wanted to love it, but it’s a horror game with no horror, a walking simulator with no tangible hook and a depressing case of potential gone to waste.

The true horror comes from the missed opportunity, it seems.

While the opening 30 minutes might convince you otherwise, The Fridge is Red is an uninspired walking simulator with little actual game to engage with. A cool retro art style and sense of atmosphere dissipate out of this open fridge into the ether of a bland, empty and lukewarm room. This fridge is sadly more grey than red.

The Fridge Is Red is available now on PC via Steam.