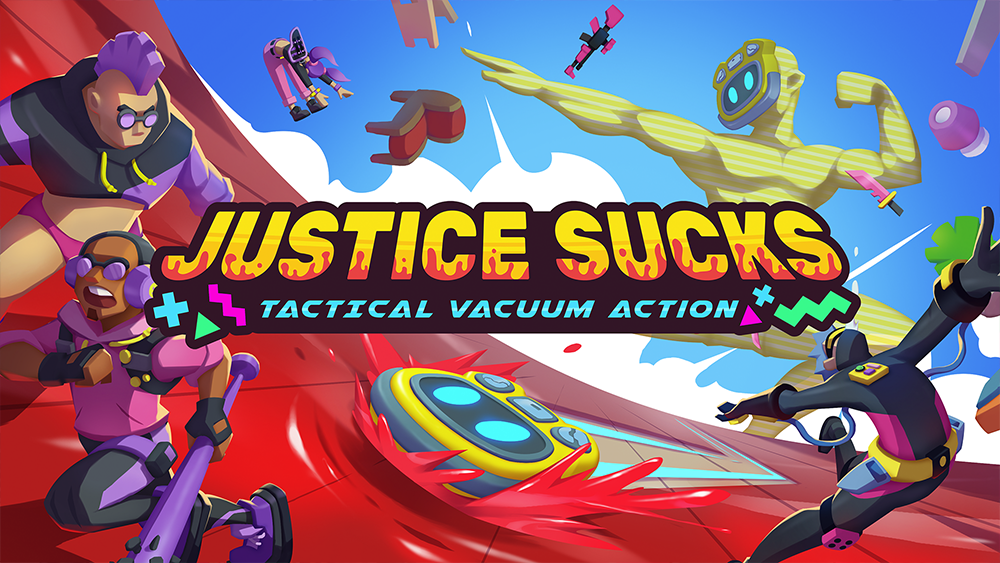 Justice Sucks is Samurai Punk’s second stab at the Roomba gone rogue – but does it sweep the floor? The Finger Guns Review:

Justice Sucks is Samurai Punk’s second stab at the Roomba gone rogue – but does it sweep the floor? The Finger Guns Review:

Back in 2019 I bought Roombo: First Blood on a whim. My eyes were drawn to the vibrant cover image and on further inspection, it also sounded hilarious. You play as a Roomba that kills burglars invading the home you serve. Afterwards you clean up the destruction so the family are none the wiser. The premise and presentation are where the highlights began and ended though. The controls were clunky, graphics belonged on a small phone screen and although it was an easy platinum, I hoped for more overall.

So, I was cautiously optimistic going into this. Roombo: First Blood was a small Platinum-bait game but lightning doesn’t usually strike twice, right? Well I’m happy to report that Justice Sucks feels like the game that Samurai Punk wanted to make in the first place, and is a vast improvement on all fronts. The McClean household just got an upgraded model in this top-down stealth action game.

Justice Sucks follows on immediately after the events of Roombo: First Blood. As Dusty McClean successfully stopped a home invasion, it quickly caught the attention of FamilyCorp. This antagonistic corporation want to keep crime rates high in the family home. FamilyCorp’s Warranty Squad visit the unsuspecting Roomba and after a short battle the family are kidnapped. Dusty gets flung into the living room TV ands winds up in the TV world where he befriends his fighting spirit, Sexy McClean. The pair are now out for vengeance to take down FamilyCorp and to save their family.

The story is more involved in this sequel compared to Roombo. There’s a nicely animated 2D introduction like the first game, however, after that it’s just in-game cut scenes. There’s no dialogue, but what’s in place is entertaining physical comedy. The Hans Gruber looking villain running FamilyCorp never fell off Nakatomi Tower. He instead lets crime reign so he can profit from sales on his security hardware – making Dusty a real problem. Other than a couple of nasal exhales at some moments, I found the story to be a passable attempt of fleshing out the game’s narrative. It adds motive sure, but the story beats aren’t anything to anticipate. Instead, the bulk of Samurai Punk’s efforts appear in the gameplay.

After finishing Justice Sucks, I redownloaded Roombo. I had to check I didn’t gaslight myself into thinking Roombo wasn’t fun to play because Justice Sucks felt great. I was right though, the differences between the two are night and day. Whilst the core of the design has remained unchanged, the actual gameplay has had a complete overhaul. Controls now feel far more intuitive, with different buttons mapped to bring it into this decade of games. The cursor has been ditched to select traps in the hacking mode and now has a contextual lock on. This change does comes across more modern and handles far smoother, but when it comes down to picking a specific trap, Roombo’s cursor does have more accuracy when you’re in the heat of battle.

Of course, being a Roomba, you can suck up objects and use them to throw at enemies. The improvements in being able to carry three objects at a time and have a dedicated suck button increases the fluidity in the moment to moment gameplay. On top of that, the overall speed of the Roomba has been increased. Getting rid of switching between slow or fast speed like in First Blood, it’s now based on the pressure you apply to the left stick. All of these improvements have resulted in an incredibly addictive loop. I found myself replaying levels to achieve the rank of Cool S+ and getting my name up on the leaderboard. Combos win you a better score with no timer to worry about, but it will reset if you get hit. The want to keep my combo through the level and be untouchable really adds to the action hero motifs they go for in the game. As well as encouraging the player to do better each time.

Justice Sucks starts in the house from the first game where you’ll learn the basics. After that the levels are inside the TV World. I don’t know if I’m missing something, but with the 90’s inspired presentation I thought I’d recognise references. To my understanding the levels aren’t particularly from anything TV related. However, they’re varied and filled with so many differences between them, I was excited to see what each level had in store for me. With secrets to find and new ways to kill your opponents, the levels for Justice Sucks have really opened up this time around and no run ever feels the same.

Roombo: First Blood was one note with its approach in the single level you’re left with. Justice Sucks changes that by increasing the game modes tenfold. The original mode is still around where you have to stop a robbery but it now shares the space with: An Elimination mode, Rescue Mission, Delivery, Cleaning Frenzy, Bomb Squad, S.O.S and Break the Targets. All of them break up the potential monotony of playing through the story, whilst offering more to do in the few levels it has.

All the modes are different enough, switching up each run. The only mode that I could do without is Break the Targets. The goal is to collect the tokens scattered around the map as quick as possible – it’s not my bag personally – but it’s different enough that it adds to the diversity. A surprising highlight is Cleaning Frenzy. In an era where Power Wash Simulator has taken people by storm, Cleaning Frenzy offers a nugget of that satisfaction by cleaning up those blood-soaked laminates. With the addition of a tune I’ll be singing in my head when I do my own household chores, this is surprisingly moreish.

Justice Sucks has finally found its aesthetic this time round. The art style and presentation fit the late 80’s, 90’s American inspiration. Whether it’s a song that parodies Backstreet Boys or the neon blues and purples you’d see on the Jazz Cup, Every facet touches those cornerstones of nostalgia. On top of that, the graphical fidelity this time round has seen some love. Whilst there’s still that smooth cartoonish look devoid of textures, the improvements are seen in the lighting and colouring that adds to the overall quality of the visuals.

Character models look a bit basic close up – say during the in-game cut scenes – but during the gameplay when it’s a top down view, the criticisms don’t matter so much. This view hides the general ugliness of the characters and when they’re roaming levels with so much in them, you don’t notice it the majority of the time. Justice Sucks isn’t a game that stands above its peers visually but at least this time round it looks as good as other indie games out this year.

I Hope You Had The Hoover Of Your Life

I was shocked coming away from Justice Sucks. Having hopes for some improvements since the first game, I was blown away by the results. Without sparking a debate by naming a moment where the sequel was better than the original – Justice Sucks eclipses Roombo: First Blood. Whilst the original felt lacking, Justice Sucks has obviously had so much love poured into it. The presentation, gameplay and humour has instantly interested me in what Samurai Punk does next. I hope Roombo: First Blood won’t put anyone off playing the sequel because I implore you to check it out. If you’re like me, this is the game you were expecting the first-time round.

Justice Sucks: Tactical Vacuum Action rights all the previous wrongs that Roombo: First Blood set. The presentation, gameplay improvements and variety this game has to offer when you’re just a Roomba killing folks makes for an entertaining gameplay loop that finally sucks the landing.