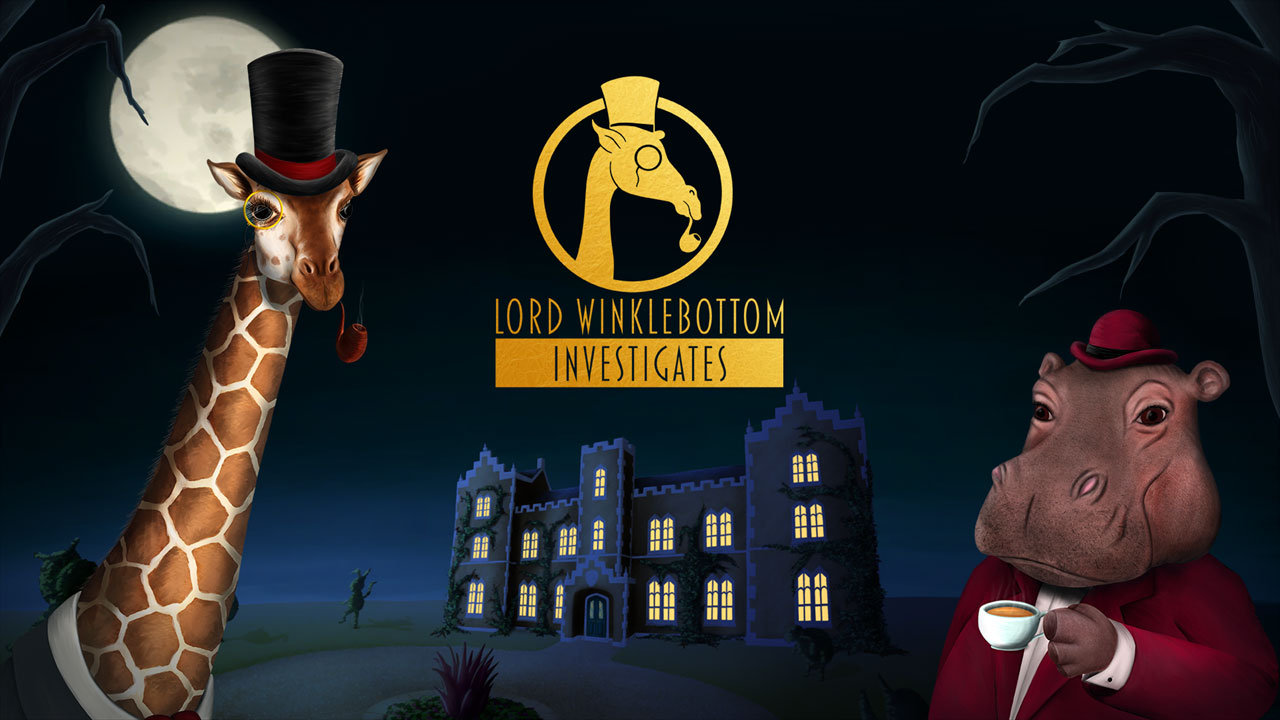 A charming and rib tickling point and click adventure, Lord Winklebottom Investigates is a lovely way to fill an evening. The Finger Guns Review.

A charming and rib tickling point and click adventure, Lord Winklebottom Investigates is a lovely way to fill an evening. The Finger Guns Review.

Ever since Sir Arthur Conan Doyle’s mystery solving duo Holmes & Watson first delighted readers in the late 19th Century, the characters have inspired parody, pastiche and homage. The dynamic of the inscrutable, flawed genius and the intelligent yet grounded foil can be found in all manner of popular culture across TV, movies and games. An excellent example of how this trope has evolved can be found in the new point and click adventure ‘Lord Winklebottom Investigates’ from developers Cave Monsters.

The Holmes in this instance is the titular Lord Winklebottom. In a 1920’s themed world full of anthropomorphic characters, the lead is a whip-smart, dashing, mystery solving giraffe detective. Beside him always is his hippo companion, the medically trained and wise cracking Dr Frumple.

Invited by an old friend, the Admiral Aristotle Gilfrey (an Axolotl), Lord Winklebottom and Dr Frumple have arrived on an isolated island alongside a host of other guests. A scream rings out and as the pair enter the scene, they find Gilfrey dead. Fowl play is suspected, there’s a mystery is ahoof, there’s a cast of suspects – Lord Winklebottom and Dr Frumple are on the case. It’s a classic set up straight out of an Agatha Christie novel, only the cast are furry or feathered and often four-legged.

Where Lord Winklebottom Investigates differentiates itself from most homages to Sherlock & Watson is that the leaps of logic have to come from you, the player. In TV and movies, watching Sherlock deduce things using a depth of knowledge and logical thinking is a passive and impressive experience. Here, the player is at the centre of it. Those deductions will have to come from you.

To enable that, this game works around a steady stream of ‘eureka’ moments across three chapters. An inventory driven puzzler, the vast majority of the head scratchers in Lord Winklebottom Investigates require some logical or creative thinking. In terms of challenge, it’s certainly in the top half of point and click adventures, even with hints from Dr Frumple who offers a gentle nudge towards which puzzles would be easiest to solved next, rather than how to solve them. Trial and error will only get you so far – and some items only become ‘active’ after certain criteria have been reached – so sometimes you’ll have to take a step back and really think about what to do next.

Because of that, Lord Winklebottom Investigates is a constantly rewarding experience. You’ll often be following a breadcrumb trail of clues to come to a conclusion on how to do certain things but the game never hands you the solutions outright. As the player, you’re made to feel smart by putting together the pieces yourself in a way that the best in the point and click genre do.

I imagine those moments when you’re really struggling to piece stuff together would be grating if it wasn’t for how charming Lord Winklebottom Investigates is. The cheeky British spirit permeates every aspect of the game with characters prone to a “well, I say” when surprised, regular nods towards the Brits’ tea drinking habits (it’s water before milk and I won’t have it any other way), and an occasional bout of dry, biting sarcasm that can only come from growing up in the UK. This is never farcical – it stops well short of going full on “tally-ho old bean, by Jove” – and feels like a celebration of the notable British fictional detectives of the past rather than a joke.

Lord Winklebottom Investigates does have jokes though. Loads of them. Dr Frumple is prone to the occasional animal pun – “I say, he seems like a bit of a boar” – which is almost always followed by a short but comedically timed silence. There’s a few moments of disaster that I won’t spoil here but they come loaded with guilty laughter and schadenfreude. It’s the banter between the outlandish cast of characters that’s the real star of the game though.

These characters are brought to life via a beautiful hand drawn art style and some top class voice acting working with what was obviously a quality script. There’s some genuine British accents here, notably a proper Welsh accent and a couple of Northerners that made me feel right at home. The characters, all with ridiculous names like Ulysses Spode and Salty Walters (a boozy boat captain pug), are memorable and full of personality.

Throughout Lord Winklebottom Investigates, you’ll find that almost every character has the motive and opportunity for murder, the investigation of which forms the basis to the story line. Each character has their flaw that you’ll uncover, leading you to suspect their intentions. I’ll make a small bet with you however – I’m positive you won’t guess in which direction the story goes. I’ll almost guarantee you won’t predict the motivations of the perpetrators before they’re revealed. It’s not often that I feel surprised by a narrative turn. I was surprised here. While it didn’t come out of nowhere, the foreshadowing was so slight, that it feels designed to catch you off guard.

It would be remiss of me not to mention the few niggles I had with this game. For all of the quality voice acting in Lord Winklebottom Investigates, it can sometimes feel like it’s progressing too quickly. Whereas many point and click adventures ask you to click/press a button to trigger the next line of dialogue, conversations here will continue unabated until they’re over. There’s no way to slow this down, so some conversations can be tricky to keep up with if you’re playing on the Switch in a busy environment. This is especially true when Lord Winklebottom (a naturally fast talker, in-keeping with the character), talks with someone else who’s economical with their words.

The Switch version of Lord Winklebottom Investigates is otherwise very good. It makes good use of the many input methods the console has including the touch screen, buttons and thumb sticks. However you prefer to play your point and click adventures on console (e.g. without a mouse), you’ll likely feel catered for here.

My only disappointment with the mechanical functions of Lord Winklebottom Investigates is that it’s missing a few accessibility/ease of life options that are standard for most point and click adventures these days. There are a few interactive elements that are so small on the Switch’s screen that they’re easy to over look. An option to highlight interactive objects in each screen would have alleviated some unnecessary (and likely unintended) challenge at times.

Otherwise, Lord Winklebottom Investigates is a jolly good point and click adventure. It’s challenging, sure, but equally as rewarding, existing in a charming world I’d love to see again in a sequel. In a year that’s resplendent with point and click adventures, this is among the best of 2022 and an easy recommendation for fans of the Lucas Arts classics or dry British humour alike.

Paying homage to Sherlock Holmes and Agatha Christie murder mysteries through the lens of classic British humour, Lord Winklebottom Investigates will have you puzzling and pondering a curious and quirky case. It’s arrestingly charming, complete with a gorgeous hand drawn art style and excellent voice acting. The challenging leaps of logic required to complete the game mean this might not be suitable for point and click novices but fans of the Lucas Arts classics will have a blast here.