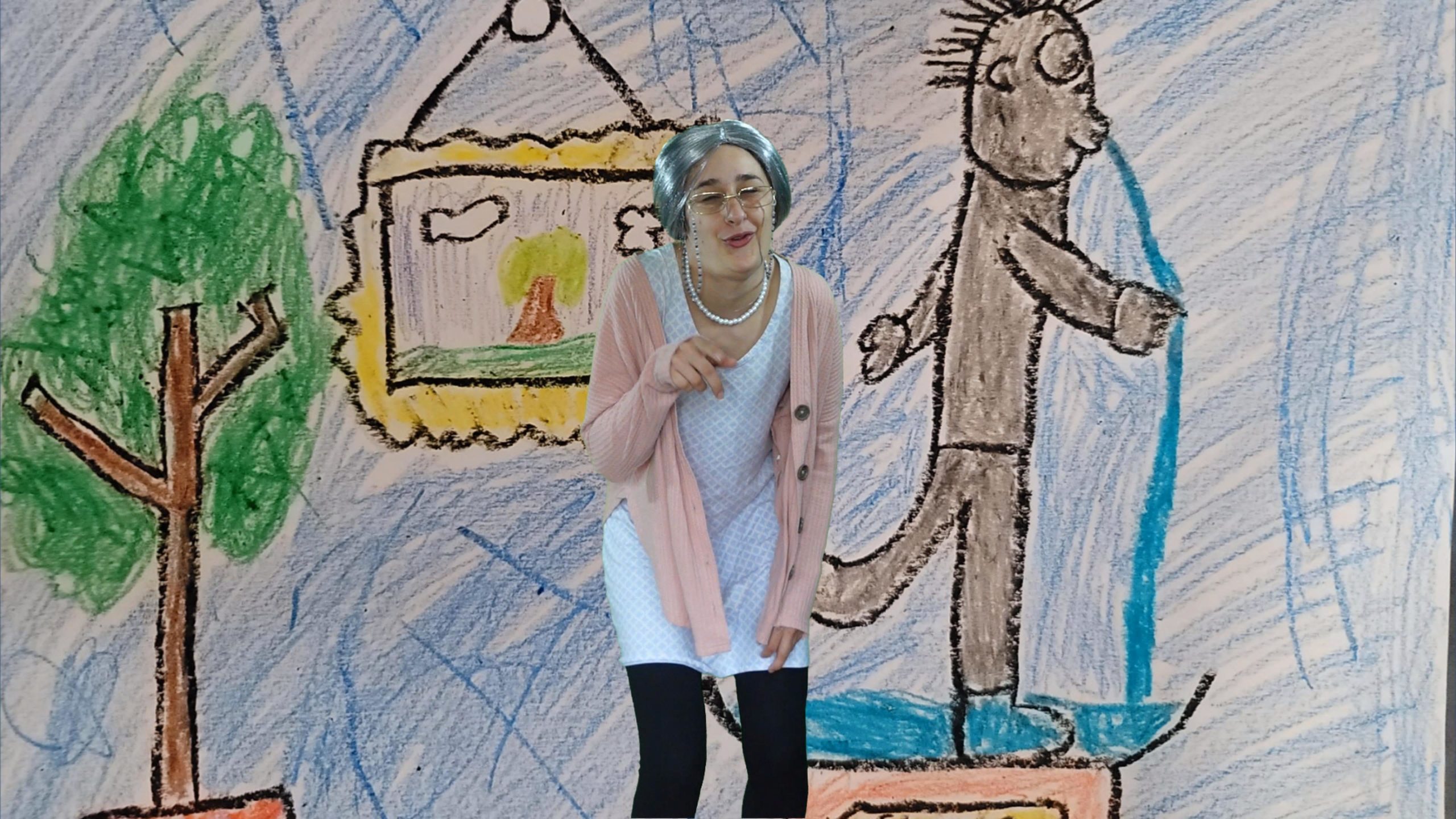 An FMV game with the quality of a poorly chopped together home movie, the sincerity of 'I'm in Love With Your Dead Grandmother' is its only saving grace.

An FMV game with the quality of a poorly chopped together home movie, the sincerity of ‘I’m in Love With Your Dead Grandmother’ is its only saving grace. The Finger Guns Review.

I don’t think I’ve ever got second hand embarrassment from a video game before. I can’t remember a time before now when I’ve been playing a game and though “Oh wow, this is so cringe inducing, I feel bad for the creators”. That changed 5 minutes into playing “I’m in Love With Your Dead Grandmother” from Kimulator’s Films. As the lead character attempted to make their voice less annoying by taking a children’s camera out of their pants and by eating fake food made of what looked like Playdoh, I couldn’t help but feel embarrassed. Both for the creator, and for myself as I play it.

After what feels like a painfully long time (although in actual fact, it was only moments), the reason why this game was called “I’m in Love With Your Dead Grandmother” becomes clear. A madcap, odd and frankly brow furrowing series of events unfold in a bottle episode of an FMV interactive movie styled experience that feels like a collection of friends acting out the worst gags that were left on the cutting room floor from Family Guy.

A Love Story For The Aged

“I’m in Love With Your Dead Grandmother” is the story (and I use that word in the loosest possible sense) of Noah. According to the PlayStation Store description, Noah is a gamer, photographer and is looking for “action” via an online dating site. None of that is adequately translated into the game so instead, we open on Noah meeting his potential love interest Michelle. They meet in a park where Noah takes pictures of Michelle using a crappy kids-VTech-styled camera, feeds her food made of plasticine and then spends an awkwardly long time monologuing about himself as he hypes himself up to go to Michelle’s house.

Once here, the pair exchange strained lines of dialogue until Noah notices a picture that catches his eye. It’s a photo of Michelle’s Grandmother, Betty (played by the same actress as Michelle only dressed to look older). Inexplicably, Noah becomes infatuated and starts to day dream about trying to woo Betty here while simultaneously sabotage his date with Michelle. The game flits the two scenes – between the real world where Noah and Michelle are having an awkward date and Noah attempting to bed a 70 year old Betty in his imagination. It strikes a truly irreverent and outlandish tone that makes Spongebob Square Pants look conventional.

Old Age Pensioner – I Choose You!

As is the standard with modern day FMV games, “I’m in Love With Your Dead Grandmother” has a branching narrative of sorts. Unlike many of its modern day peers however, the branches here are desperately short. Twigs almost. At various junctures in the game, the interactive movie will pause and you’ll be given a pair of options to choose. These options guide Noah’s actions. For example, when Michelle takes offense to something Noah says, she insults him. The game then gives you the option to apologise or to insult her back. There are 2 timed options too where you’ll simply get the choice to either go through with an action – like avoiding a slap – by pressing a button, or by doing nothing.

The choices in “I’m in Love With Your Dead Grandmother” only influence the proceeding 20 to 30 seconds or so. Once that particular scene that you’ve chosen has played itself out, the game always returns to the same narrative stem. There’s only one real ending and you’ll arrive there no matter what choices you’ve made, making the whole game feel inconsequential. To be fair, that’s in keeping with the irreverence of the whole game.

Not in love with the production values

The quality of FMV games, even from tiny indie studios, has sky rocketed over the past few years. “I’m in Love With Your Dead Grandmother” doesn’t clear the lowest bar of quality in this genre these days. Camera cuts are awkward with delays between lines of dialogue making it feel unnatural. The lighting changes between a number of the cuts which is quite jarring. The sound sometimes flits between being too loud and too quiet. The imagination scenes where Noel is attempting to seduce Betty are filmed in front of a green screen with child-like crayon drawings as a backing. That’s obviously an intentional, artistic choice but it doesn’t make the game feel any more appealing. All in all, there’s a litany of production issues which make this game feel more like a poorly chopped together home movie.

In the end though, it’s that ‘home made’ feeling that acts as the saving grace of “I’m in Love With Your Dead Grandmother”. For all of its production issues and nonsensical, cringe worthy writing, you get the feeling that this was just a few people dicking about and having a great time with one another as they film stupid gags. There’s a level of underlying sincerity about a couple making something that’s daft fun that’s strangely endearing. It’s easy to imagine the makers of this game falling around laughing at how cheesy and goofy everything they’re doing is each time they stop recording. Shortly before I finished my first playthrough of “I’m in Love With Your Dead Grandmother” (which lasts for less than an hour), the second hand embarrassment had been replaced with a strange admiration for Kimulator’s Films for doing something they obviously enjoy and putting that out into the world, warts and all.

Does that save “I’m in Love With Your Dead Grandmother” from being a substandard FMV game? No. Not at all. There’s very little doubt in my mind that this is the worst FMV game on PlayStation consoles. Even worse than The Quiet Man. I doubt my opinion will matter to Kimulator’s Films however. They just seem happy to be doing what they’re doing and that comes with an unusual charm.

Rough, goofy and deeply perplexing, “I’m in Love With Your Dead Grandmother” is among the worst FMV games on consoles. Its only saving grace is how obvious it is that the creators are having a good time making it, giving it a charming sincerity.

I’m in Love With Your Dead Grandmother is available now on PS4.

Tags: I'm in Love With Your Dead Grandmother Kimulator's Films