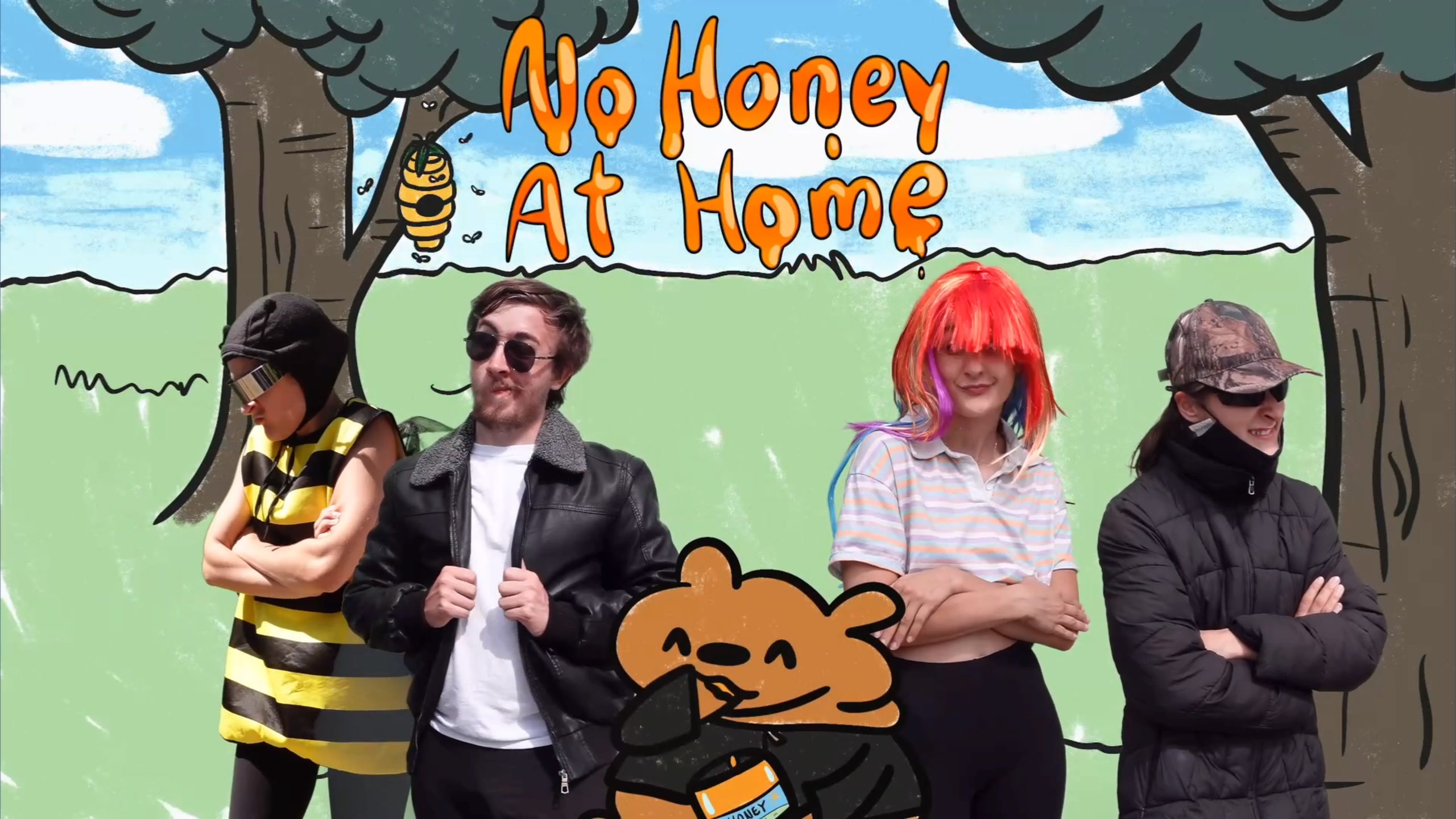 It’s the distant future. Mutant killer bees now run the planet for unexplained reasons. Honey is illegal. All is not lost though – there’s a resistance that are fighting for… honey? Or survival? They’re fighting for something but it’s not quite clear. It might be whoopie cushions. I’ll be honest, the set up to FMV game John Fart: Text-iverse of Crazyness is painful to get through.

In a shoddily shot and roughly cut together scene, you’re introduced to the resistance. Namely, the titular John Fart and his boss. In order to save honey and the future, the gorilla force are going extract a fictional bear from a story book (in the “Text-iverse”) and then travel back in time to 2022 (their past). Once there, they hope the bear can eat all the honey, thus preventing the rise of the mutant bees. Lost? Yeah, me too, and I’ve completed this half-an-hour game twice.

Things only get more outlandish from here. Gun toting bees. Throwing toy dolls into a pool. Ghosts from future versions of characters that have yet to be born. A cartoon bear that’s constantly breaking the 4th wall. From start to finish, John Fart: Text-iverse of Crazyness is an abstract series of jokes that barely hang together as a story because the plot has more holes than a pool table.

At various junctures, the game pauses and you, as the player, get to decided on which way the ‘story’ heads next. Don’t expect multiple endings or a diverse branching narrative however. Many of these choices immediately result in a failure condition, forcing you back to the last checkpoint. There’s only 2 endings in the game and they’re purely dependent on the choice you make right at the end of the game.

Like the previous FMV games from Kimulator’s Films (I’m in love with your dead grandmother), this game is made by a very small group of people. It’s essentially a couple, a man and a woman, who play every character in the game, swapping costumes to give each a different look. The pair obviously get a little bit of help this time around because unlike their previous games, both developers Alain and Marie appear on camera at the same time. This means someone was obviously manning the camera while shooting John Fart.

Much like the developer’s other games, John Fart feels like watching a couple have a laugh with one another. Unfortunately, like many couples, their humour is made up of lots of in-jokes. The irreverent and bizarre humour throughout this game comes across as a series of private jokes that are missing the context in order to make them funny. Instead, they’re simply cringeworthy. There are a few laughs to be had, but rather than laugh at the content of the game, it’s more to do with the second hand embarrassment you’ll feel.

Here’s an example of the type of humour you can expect: John Fart and the resistance boss are discussing getting YooBear (like the Pooh Bear you ordered from Wish) out of the book. The boss explains that John will only get 3 minutes in which to convince the bear to leave the storybook and travel to the real world. John then says “I won’t need 3 minuets, I’ll do it in 2… I don’t need 2 minutes, I’ll do it in 1 minute… I don’t need any time, I’ve already done it. It’s done”. This all feels like improvisational humour and you can tell both the cast members are trying not to crack up. As a viewer and a player though, it’s just not very funny.

So the script and contents are poor. What of the actual quality of the footage? Well, the camera angles and framing are a mixed bag. They range from “well, that was fairly well put together” to “two stoners trying to film something on a mobile and the camera is facing the wrong direction”. The lighting changes between cuts and some scenes struggle with focus.

It also appears that little to no effort has been put into scouting out decent locations to shoot this FMV game. A back garden. A Park. Outside what looks like a red brick office. It’s all so bland. The most convincing moments of this journey of rebellion are the scenes within the story book, shot with green screen.

As for props, John Fart features an almost impressive array of toy guns. It’s a shame that everything else looks like junk that’s been thrown together. For example, the lead character has a very obvious ethernet cable put to his ear in order to travel into a story book. It’s such low-effort fare.

I have to complement the visual effects in John Fart however. The bear that’s in the game is superimposed onto the footage quite well. There’s quite a lot of unique animation for this character, like getting his stuffing blown out. It’s a shame that the human characters can’t be as animated…

A trumped up performance

The worst aspect of John Fart is one that is totally unavoidable. Some context: Both developers have strong French-Canadian accents. That’s genuinely not much of a problem normally. I’ve been able to understand what these actors have said in every other game I’ve played with them in. In John Fart however, I really struggled to understand what the pair were saying at times.

This is for different reasons. Marie, when playing the resistance boss, has her mouth covered. There are a handful of sentences that were really difficult to hear because the microphone obviously wasn’t close enough to catch her muffled voice clearly enough.

A little bit of polish – the bare minimum of most games these days would have done – might have avoided this issue. There’s no way to apply subtitles in the game. These would have been a godsend, no matter your accessibility requirements. There isn’t even a way to pause the game during play either.

So, John Fart: Text-iverse of Crazyness is yet another desperately poor FMV game from Kimulator’s Films. Like their previous efforts however, I don’t imagine my opinion on this game will matter much to its creators. They obviously enjoy doing what they’re doing. They might be the only two. There’s obviously a market out there for short, poorly put together FMV games with easy Platinum trophies too, or these wouldn’t continue to get made. In the context of a blossoming FMV genre though, John Fart: Text-iverse of Crazyness is one of the worst I’ve played in some time.

With immature humour or impenetrable jokes that lack context, John Fart: Text-iverse of Crazyness will generate more cringing than it does laughter. Sloppily shot, poorly edited and with a narrative that makes little to no sense, this FMV game is among the worst of 2022.

John Fart: Text-iverse of Crazyness is available now on PS4.