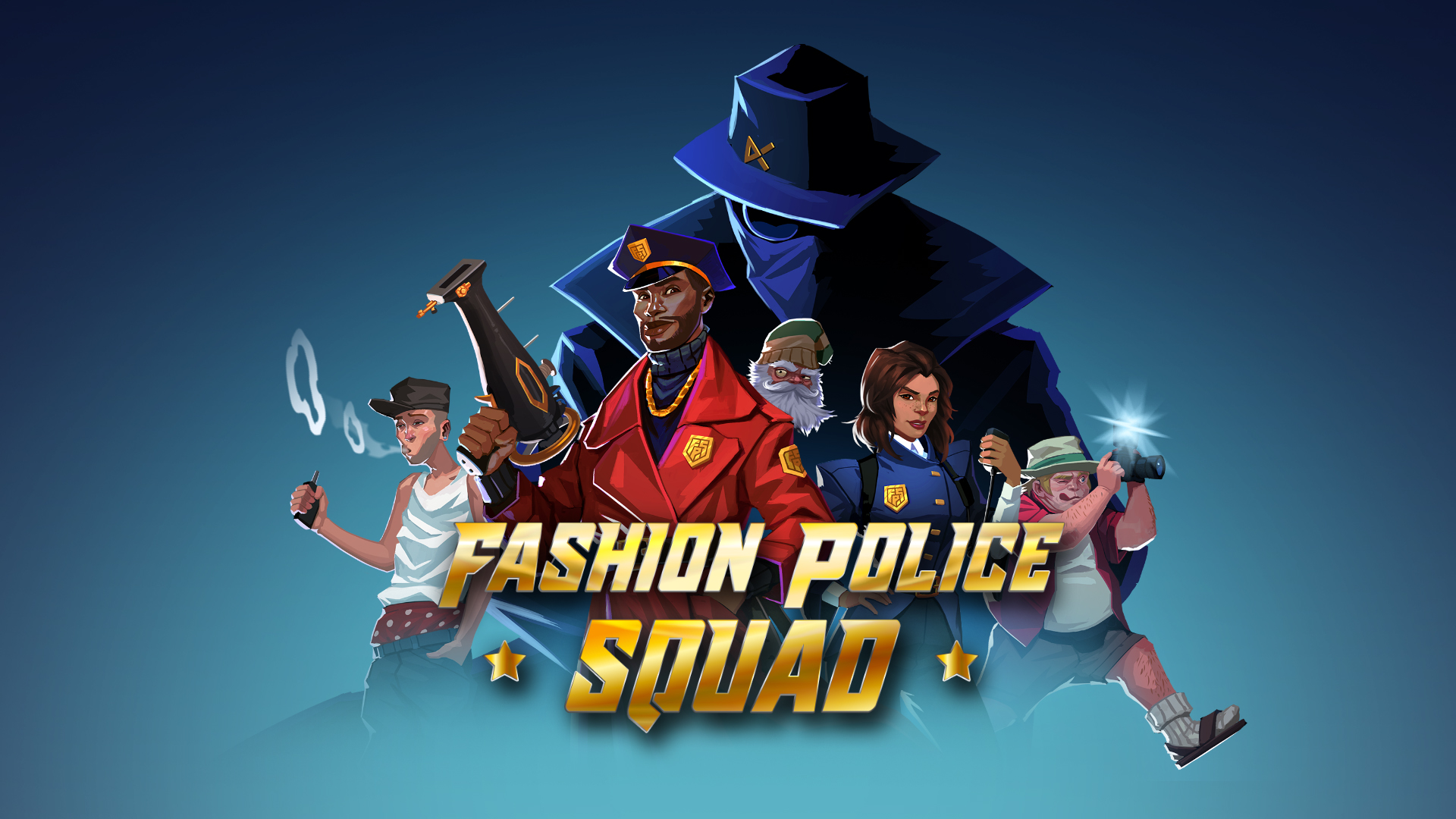 Ever wondered what Doom would look like if it was made by a RuPaul and Gucci collaboration? No? Well, do I have a surprise for you.

Fashion Police Squad [Steam Link] or FPS to its friends, is that exact concept brought to life with a retro art style, blistering fast-paced combat and a stylish sense of swagger to boot. Freely dropping terrible puns that’ll have you reluctantly chuckling, the story is completely non-sensical but in that really fun, entertaining kind of way. It’s probably slightly unhinged and it also probably shouldn’t make for a good game. Make for a good game though, it really does.

It has a couple of minor faults that slightly hamper the experience in moments, so while it’s not quite a Louis Vuitton FPS, you’d probably find it amongst the Prada’s and Armani’s of the video game space.

Unlike virtually every other shooter to ever exist, FPS is less about blowing off heads and dismembering limbs with explosive armaments and is more about trimming down those ill-begotten trousers while sorting out that bird’s nest of a hairstyle. Non-violence is the aim of the game here, as you take command of Sergeant Des who’s aiming to deliver style, swagger and fabulousness to a city gone drab.

The narrative is low key and the satire of modern day culture is worn as openly as a suit made of beef on a quirky pop star. Des and his partner in fashion are sent out to respond to the most despicable of threats – sandals worn with socks, flame-bro shirts of the 2000s (you know the one, don’t lie) and hideously bland, corporate suits. Sergeant Des is a man of swagger and he’s here not only to serve and protect, but to look damn fine while making everyone else look dapper.

Throughout there’s puns; a plethora of references to other games (e.g Final Fantasy, CoD) including a phenomenal homage to Metal Gear Solid 1 and predictable-yet-highly-amusing “plot twists” involving a secretive “Deep Coat” and a villainous figure aiming to rid the world of colour, vibrancy and happiness. Not if Sergeant Des has anything to say about it.

Dialogue is largely text and simple grunts with some voiced dialogue, but it’s surprisingly effective and it’s content to be good-natured fun. It’s impossible to take this seriously and nor should you, it’s a comical backdrop to entertain you as you de-grey the city and show off your swanky skills. Fashion Police Squad is well written and leans in to oddball comedy, so if you’re into Aeroplane! type of humour, you’ll feel right at home playing this.

This Gun Is 2DYE-4, Darling

Across each of the game’s 13 missions (not including separate challenge levels) you’ll be dutifully carrying out your public service using a variety of weapons. The basic shotgun plasters colour onto robotic, soulless bankers while it’s secondary plasma beam absorbs vibrant palettes to super-charge it. Your assault rifle is a sewing kit repurposed right out of your nan’s bedroom to pin and tighten those forbidden sights of baggy trousers and hand-me-down jackets.

Each weapon has it’s own purpose, secondary fire and necessary requirement. Enemy varieties are thrown at you thick and fast in the line of fashionable duty, so you’ll need to quickly learn what works best for each encounter. A dull suit can’t be defeated by a super-soaker and a flame-bro can’t be chilled out with sock deploying gnomes, for example.

As missions progress, you’ll go from dealing with a single variety to having massive swathes of uncouth fossils tearing at your glamour to bring you down. You’ll have to be manically switching between weapon options, firing off blasts of paint, water and entire wardrobes alike in order to fend them off. It’s super fast paced like the FPS games of old, with a mix of both linear alleys to bee-line through and cut-off gauntlet areas that can only be passed once you’ve ensured everyone is looking their best.

I enjoyed the gameplay a lot. It boils to down to about 80% combat encounters, 10% exploration and 10% platforming, the latter of which centres on your Belt of Justice. This belt is majestic (must be a Prada) – you can swing from conveniently placed posts, stun the dullards with a quick whip and use it to break crates for health and swag (read: armour, for you oldies not down with the lingo). Fashion Police Squad is adrenaline pumping, frenetic and has an unexpected depth to the gameplay which was genuinely awesome.

Complimenting FPS’ playground of stylish upheaval is an art style to match. Environments come to life as you clear through the dull fog of corporate drones, with buildings gleaming and Des’ accessories shining brightly. It’s got a pixelated film that runs throughout its DNA and even little details like the look of the weapons and the design of corridors harkens back to the original Doom, Wolfenstein and pre-PS1 era.

I’m not even the biggest fan of retro graphics but I was really drawn into how cool and stylish Fashion Police Squad is. The transition between the mundane enemies into flashy, spritely figures full of vigour and vibrance is superbly done. Even the variety of different enemies on offer and their design is great to behold, down to the details of them attacking you by throwing briefcases or triggering a garish dubstep base assault on your sanity.

There’s just a swagger about Fashion Police Squad that feels charming and endearing in equal measure. When you couple in some late-game variety and the way it uses the environment to drop in jokes and humorous advertisements (i.e Burger Fling as seen above or Lo Wang from Shadow Warrior), it’s just a joy to explore and wander around this classy world. If these outfits were any sharper, they’d cut steel.

Good thing too, as exploration will be essential if you want to find the secrets and hidden enemies scattered around each level. If you want to achieve 100% completion, you’ll need to get creative with jumping about to discover the nooks and crannies. They’re worth seeking out too, if for nothing else than the next pop culture or video game reference it’ll harken to.

If I had a couple of gripes with FPS, they’d be admittedly minor frayed threads on an otherwise stellar piece of attire. The difficulty curve in the second half of some levels can spike erratically – certain levels will lock you into small, contained areas with little room to manoeuvre amongst a horde of hideous outfits. When this happens, you can be reduced from prized shop floor demonstration to your grandad’s 50 year old giveaways in a charity shop.

It’s frustrating because the claustrophobic death-pits are at odds with the open nature of the rest of the levels, which is where the frantic movement-focused style works its magic so well. Aside from that, the second of three boss battles you’ll encounter, while awesome, is mechanically a bit drawn out and haphazardly implemented in some ways. The boss battles are generally really well designed and tightly woven, but the second just feels like it was padded unnecessarily, making it stick out.

Bear in mind all of this is based on my experience of playing it on Normal, or as it’s better known in-game: Fashion is my Passion. So, if you’re up for a challenge you’ll certainly be met with one here, belying the non-violent exterior it presents.

Technically, Fashion Police Squad runs beautifully. It’s buttery smooth and I was consistently hitting 100-200 frames, sometimes even more than that. I didn’t run into a single technical issue, aside from an enemy spawning themselves outside of a locked-in area. They did eventually manifested themselves into the walled-off space, so points for sorting their out their own fault, right?

Fashion Police Squad isn’t the longest game, clocking in at about 5 hours for a basic playthrough of the available levels and challenges. Of course, going back to hippify every foe, find every secret and collect every piece of swag will take quite a bit longer. Even without the extra challenges however, the central appeal of powering up your dazzling glove to bitch-slap every British-tourist looking paparazzi dude into having a life is more than enough to bring you back to replay.

Fashion Police Squad is fundamentally a really, really fun and enjoyable game to play. Its retro appeal is as plain as a star-studded red carpet on Oscar’s night and the power with which this game slaps would make Will Smith cower in fear. Doom, Quake and Wolfenstein fans can rejoice that they now have the opportunity to play a heart-pumping game without having to justify why video game violence is just so much fun.

Basically, Fashion Police Squad is a great FPS and you should play it. You won’t regret it and who knows, maybe you’ll even gain some insight into why the youths of today keep calling your beige bomber jacket so out of touch?

A tremendously fun FPS with a quirky and creative presentation, Fashion Squad Police is packed with fast-paced and surprisingly deep non-violent action. A couple of difficulty spikes and occasionally frustrating encounters smudge a slight stain on its beaming overalls, but they’re more a water mark than a red wine stain. Grab your dapper sneakers, suit up your most glamourous get-up and start slapping the dull outta the unfashionable lot.

Fashion Police Squad is available now on PC via Steam.