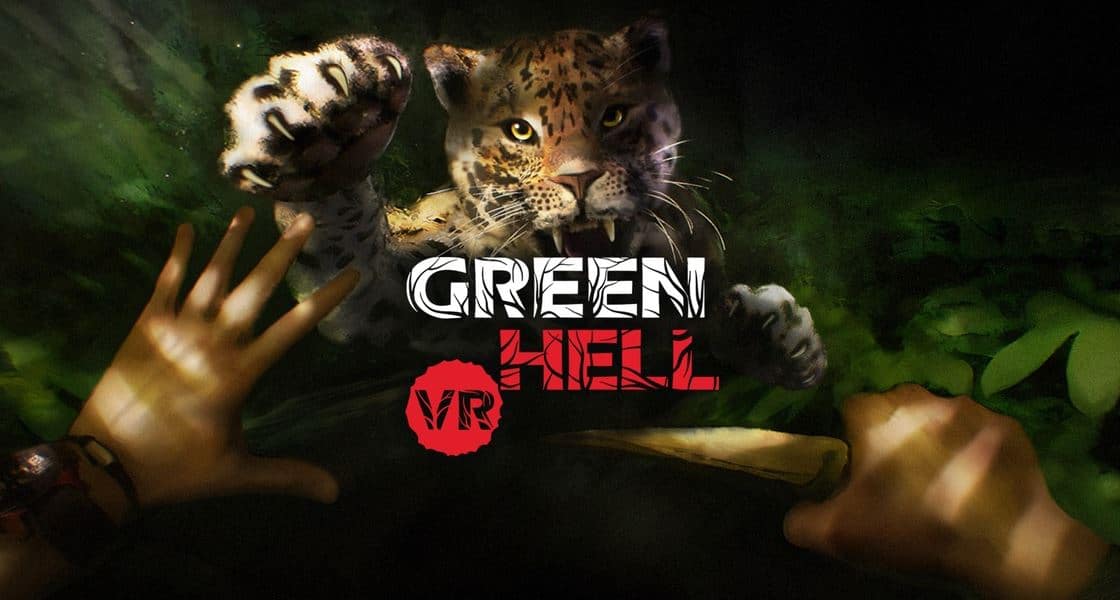 Ever since I was a Cub Scout way, way, way, way, back in the mid 80’s, building camps and making ‘tools’ (read ray guns and lightsabers) from random s**t found laying around was the fuel for my childish imagination. Being prepared was drilled into us every week.

Because of this I always thought I had a bit of a head start if ever I was to be trapped in the Amazon rainforest. Turns out that Cubs and Scouts don’t teach you f**k all. Even in the video game world. Surviving is really hard.

What am I talking about? Well, it’s Green Hell of course. The survival-’em-up from Creepy Jar that has now been ported to the Meta Quest in the shape of Green Hell Quest Edition.

What we have here is a beautiful but flipping challenging VR survival game that has been remade from the ground up to make use of the extra dimension and features the VR headset offers. This means that chopping trees and eating food are now handled by real-life actions rather than a button press. Hurrah.

In the game you play as Jake Higgins, a famous anthropologist, who initially sets out to make contact with a lost Amazonian tribe but, after some unfathomable cut scene, instead gets left alone in the jungle with just his wits.

When you load the game you are presented with a variety of options that dictate how harsh the game world will be. If you’re new to the genre then I suggest starting on the easiest setting (which is still nightmarishly hard). Other options include motion/movement styles and vignette intensity. There are lots of options for this which really helps with possible nausea you may feel while playing. There is also a ‘Tutorial’ which is woefully short-lived, teaching you how to make a fire and that’s about it.

Once the game begins, you’ll likely feel genuinely lost. At least for for the first three of four attempts, It’s likely you’ll die within minutes. Eventually though, you’ll get your brain wrapped around the whole idea of being lost in a jungle and survival mode kicks in. You are aided somewhat by a handy notebook that automatically scribbles notes about plants, fruits and other possible edibles found. Once you get to grips with how to survive, what plants to avoid, what is safe to eat and how to craft tools and so on, you’ll soon be making a base camp where you can save. Yes, you can only save the game once you have made a camp. The notebook also doubles as your crafting wheel for building your various tools or campsite elements like a bed. Eventually, your notebook will become your essential bible for survival. Make no mistake – it is hard, but when you survive your first night there is a genuine feeling of pride and the game begins to open up.

Green Hell has been out on both PC and PS4 for a while now but the Quest Edition is another kettle of fish altogether. The game itself has been scaled down and of course, the graphics have taken a hit due to the constraints of the hardware. But what makes this version arguably better is the fact that it is in VR. Swinging your axe to chop down trees, or bending down to fill your coconut bowl with water is a lot more intuitive than using a controller. You also get two side holsters as well as your backpack to carry tools for quick access. This feels much more natural than when using a controller. Everything just feels much more comfortable. Couple this with the hint of VR motion nausea and VR sweats and you really will feel like you’re in a jungle!

To aid you in your quest for survival you’ll be making various tools. Crafting is pretty in-depth but made fun thanks to the VR. As mentioned chopping a tree down is pretty cool, swinging your Oculus controller in a cutting motion. If you need to make a torch you have to physically wrap the vines around a stick, just as you do when wrapping leaves around your wounds. It’s a genuinely immersive experience. Once you have tools you can go about foraging for food. This comes in the form of animals, bugs, flowers, fruit and so on. Not all are safe though so there is a lot of trial and error at first. Expect to die of vomiting, position, infection, etc. You name it, and it’s out to get you. Some players will find this a frustrating process at first (me included) but once you get it, it all makes sense.

To help you keep an eye on how you’re feeling and how fit and able your body is, you have a handy smartwatch which keeps an eye on your health and macronutrients like carbs, fats, proteins and water. This means that you know what needs replenishing and when. The watch also allows you to rest when your stamina is running low. It’s definitely worth your while to keep checking your watch as health, thirst, sanity will soon take over if you are slack at watch checking.

Green Hell is a joy to play once you get the hang of it. Standing proudly over your hard crafted camp is one of gaming’s little joys. However, the thing that makes this game so unique and fun is perhaps its downfall. The VR is a bit clunky. Green Hell uses a kind of ‘Force’ to allow you to pick things up. Highlight an object, press a button and it magically appears in your hand. When it works it works well. But most times, when you want to pick something up off the ground, you are constantly connecting with a tool that’s in your side holsters instead. I mean 9 times out of ten this will happen and it frustrates no end. Likewise, organising your supplies in your backpack is harder work than it should be.

Also, you need a lot of room space around you to play this game. Technically this isn’t the game’s fault but something to be aware of when playing. There are some other annoyances too. For example, the game lets you know you’re hungry by playing a belly rumbling sound constantly. So much so that it makes you feel a little ill. Having food you would hope would solve this but after eating an entire marmoset, three fish and a snail, my belly was still relentlessly gurgling. I’m not sure if that is a bug or by design. Either way, it’s not the best.

Despite all that though, Green Hell is one of my favourite games on Oculus so far, the immersion is incredible and is helped no end by some pretty decent graphics and sound. When it works, the VR is excellent, especially when you are bashing two stones together to make a spark to start a fire, or collecting rainwater from coconut shells.

It’s a tough task when you first start, make no bones about it, but when you sus it out, you’ll be grinning ear to ear. Me Man. Me Make Fire.

Green Hell Quest Edition is a game that fully utilises the unique options that VR offers. If you can stumble/fluke your way past your first night, this game will keep on giving.