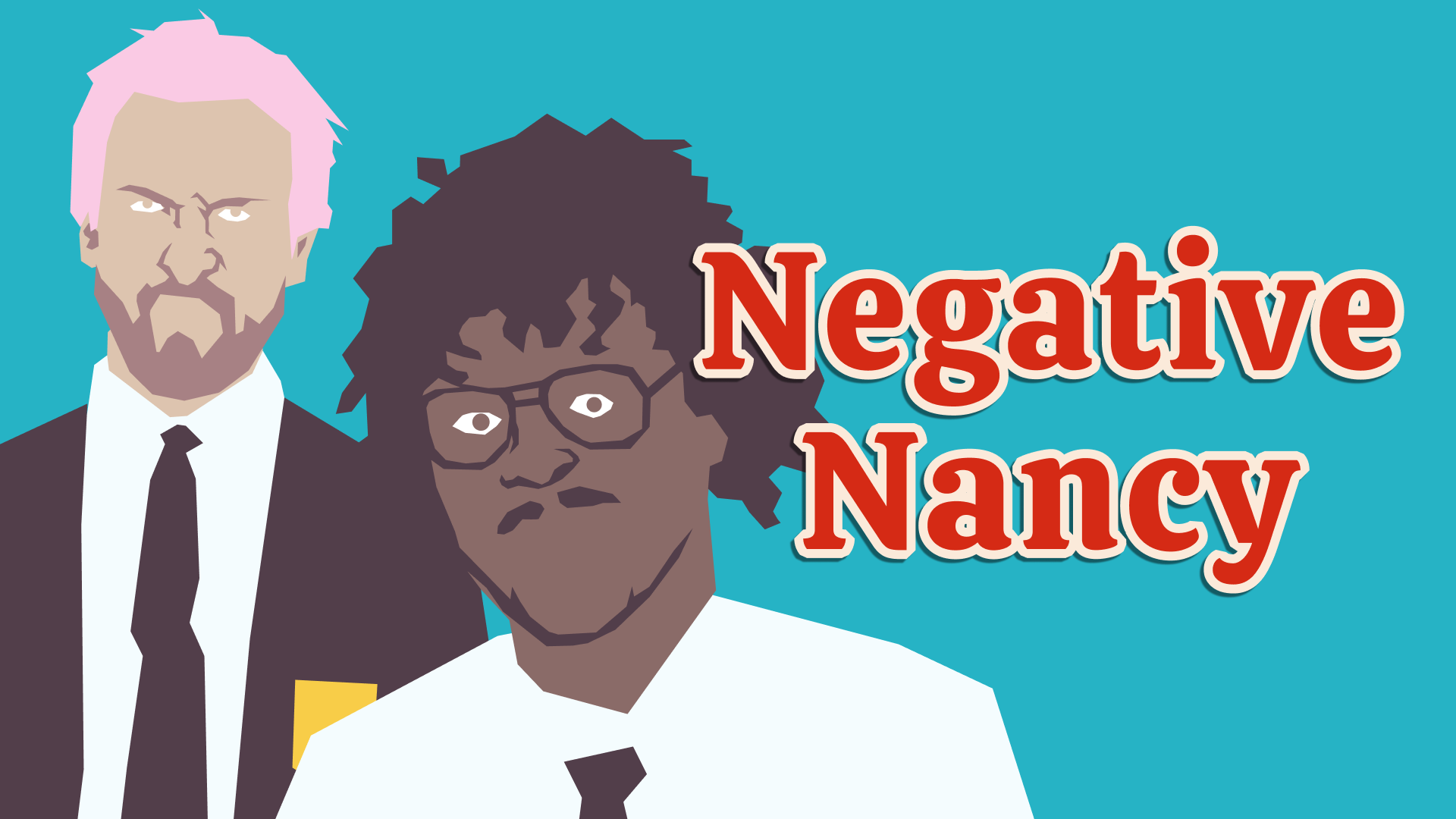 A branching narrative adventure centred around the power of the word "No", Negative Nancy is a fun but fleeting experience. The Finger Guns Review.

A branching narrative adventure centred around the power of defiance, Negative Nancy is a fun but fleeting experience. The Finger Guns Review.

When you hear the term “Negative Nancy”, it probably conjures an unpleasant thought in your brain. We’ve all met one. The chances of their name actually being Nancy is slim, but I’ll bet you’ve come across someone so negative, so pessimistic, so resistant to everything that the term could Negative Nancy could apply. While FEED’s latest title might share a name with a frustrating type of person, this isn’t a negative game at all. Instead, it’s a funny, light-hearted yet introspective “choose your “no” adventure” game.

Portrayed like an interactive visual novel, Negative Nancy is played out through the eyes of the titular Nancy. She works on the customer service desk at a Megamart alongside her best buddy and a boss who likes to think he’s her buddy, but is anything but. The kicker is that Nancy only has the ability to say one word – “no”. Hence the name of the game. There’s no explanation about why Nancy has been reduced to a single word vocabulary which, in all honesty, makes it all the more funny. No matter what situation she finds herself in, her only response can be negative. Alternatively, she can simply say nothing. While it’s a a valid strategy to use in some conversations, not every character will interpret silence as acceptance or a positive.

Thus begins 4 chapters of wild and outlandish sitcom game play, powered by the liberating energy of simply saying “no”. Customer wants to return something long after it is valid? No. Manager wants you to work over without over time pay? No. Social media chump wants to pull a prank on you? No. Saying no might not stop something from happening, but it’s fun to say no to it regardless. During each of the chapters, the situations spin out of control as miscommunication is combined with whacky circumstances to create humorous results. Imagine trying to pay for a restaurant bill when the only word you can say is “no”…

The writing in Negative Nancy is really tight and well designed around the two input types. Despite not having a vocal track (the developers instead optioning for a garbled fake voice noise that matches the game’s tone), the personality of each character comes across very strongly in the writing. The Megamart manager, for example, is a smarmy corporate shill and full of all those fake business niceties and buzz words.

You’re given the choice to say no or keep shtum after almost every sentence of dialogue in the game. Some responses will send you down different story branches which can span an entire episode. Some situations can’t be avoided – when you find Nancy waking up in a hospital after being attacked by possums, no matter your responses you’ll get the same diagnosis. Trapped by some smart writing, staying silent or saying ‘no’ will make you look dumb either way. Other decisions will change a characters perception of you which can have consequences later down the line. Deny all of a StreamTubers attempts to prank you and you’ll gain some internet notoriety yourself, for example. This clout can be used to influence other characters, at the cost of your friendship with your bestie, to unlock new routes through the game.

Each of the game’s 4 chapters have multiple endings depending on how you nope your way through them. Some of these are just wild, putting a satisfying, eccentric bow on an otherwise zany journey. Others just… end. I’ll be honest, a number of these feel all too abrupt. After exploring new branches of the story, it’s pretty disheartening to come up against a message that reads “the end” long before the story beats feel played out. It’s tiresome reaching some of these endings too as there’s no way to skip content you’ve already seen. You’ll end up repeating sections of the game multiple times just to see the new funny parts later.

That repetition makes up a lot of the time you’ll spend with Negative Nancy. A straight run through the game’s 4 chapters takes less than an hour and there’s likely a few more hours of content here for those who can withstand repeating the same beginning sections to try out new choices.

Negative Nancy might be a short experience but it’s a sweet one. That’s primarily because of how unique it is (even in a world where Say No! More exists). This game is genuinely funny, like a combination of South Park and Superstore. Whacky stuff happens but there’s a lot of reflection on modern day life here. For every random possum attack, there’s a nihilistic take on the corporate grind as a cog in the machine. To balance out a doctor and nurse having sex next to your incapacitated body, there’s a nailed on caricature of internet celebrity. There really is a lot to love about Negative Nancy for such a short game.

All of this is presented in a clean, bold, easy to read art style. While the character images might not be highly detailed, they still manage to convey all the emotion necessary to accompany their dialogue and garbled voice tracks. The world itself, like virtual dioramas you can look around while chatting, switch between being highly detailed environments (like when in the car or restaurant) and dreamlike vistas (like the staff room at work). That all feels intentional.

If it wasn’t for the repetition, Negative Nancy would be an easy recommendation for me to make. Other games in the visual novel genre navigate this by allowing backtracking to certain scenes. That would have been very welcome here, allowing you to get to all the good bits of the game without having to retread the same ground over and over.

Regardless, the unique sitcom humour will fill a bus or train journey with ease. Just don’t expect longevity.

Like a combination of South Park and Superstore, Negative Nancy is a smart but short visual novel that balances whacky buffoonery with cutting and deft real world observations. Centred around the power of the word “no”, it’s a unique hook that’s not just a pun for the title. There’s some repetition involved if you want to see everything that this game has to offer, which does take some of the sheen off of it, but Negative Nancy is still worth your time.