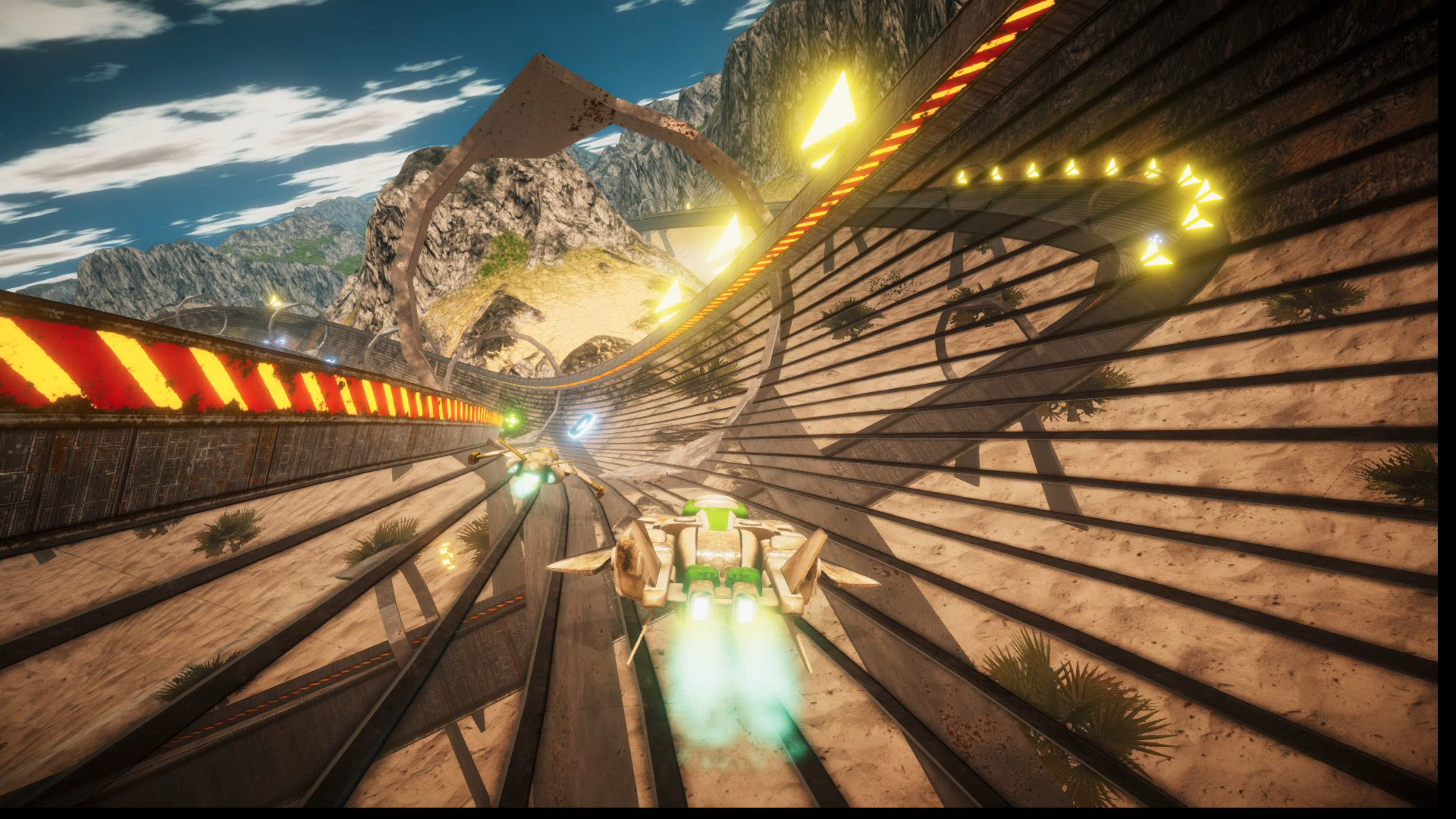 An admirable attempt at the zero-g racing genre, Gravity Chase is fast fun but ultimately can't keep pace with the likes of Radial-G and WipEout. The Finger Guns Review.

An admirable attempt at the zero-g racing genre, Gravity Chase is fast fun but ultimately can’t keep pace with the likes of Radial-G and WipEout. The Finger Guns Review.

Since Sony seem happy to let WipEout languish as a mobile card game, and Nintendo have forgotten that F-Zero exists, it has been left to indie developers to continue the legacy of the zero-g racer. Radial-G, Pacer, Antigraviator, Lightfield and many more have kept the lanterns burning for the fans of the genre’s luminaries. Often that’s been done on a budget far smaller that those that pioneered these games. Gravity Chase [Steam link] is the latest in the genre from an indie developer. Repixel8 have history in the racing genre, having made Formula Retro Racing and, more importantly, Velocity G. Gravity Chase is essentially a sequel to the latter game, improving upon almost every aspect of it.

Gravity Chase puts the player in the cockpit of futuristic racing vehicles that float along the surface, y’know, like a zero-g racing game. There’s no road friction like you find on wheeled vehicles so it feels as though these ships are gliding on ice. There’s a reasonable variety of ships to choose from, each of which has their own visual appeal and attributes in top speed, acceleration, handling and strength. Each of these characteristics can be improved over time, but I’ll be honest, it doesn’t make a palpable difference during play. The kicker here is that like in Radial-G, Ballistics and to some degree Rollcage, the ships are also magnetised to the surface on which they drive.

Going Round The Twist

That’s handy because the tracks in which you bomb around on in Gravity Chase are almost exclusively cylindrical. Whether it’s inside or along the outside of the tracks, it’s like driving through or in a pipe (and sometimes, a half-pipe) with each side acting as much as the floor as any other. While that’s not particularly unique (there have been plenty of games that have done this before) this game does have one individual aspect. Gravity.

The game can be played on three different difficulty settings. The higher the challenge, the larger the effect gravity has on the play. You see, while you’re spiralling around inside/on these tubes, there is still a floor that exists outside of the tracks. Gravity always has a pull down in that direction. This can influence your cornering as you attempt to stay on the shortest path around a corner, usually the inside. It’s not game changing but this is a physics element that most of this game’s peers lack, making it stand out.

Regardless of whether you play Gravity Chase alone or in local multiplayer, all of the racing in this game is session based. There’s no campaign mode, story or complex structure here. Instead, you and whatever over players are in your session choose a race track from those you’ve unlocked, choose a race type and hit the starting line. Points are allocated based on final position of each race – obviously, the higher you finish, the more points you receive – and a leader board is kept for the session. This resets whenever a new game session is started.

The Road To Success

While the leaderboard resets with each session, a cumulative points tally is retained between sessions. This acts kind of like an experience gauge. When you first start Gravity Chase, only a handful of tracks are unlocked. As you compete and, hopefully, win some races against the AI and/or your pals, the cumulative points tally will reach certain landmarks and unlock new tracks. The most interesting and longer tracks are unlocked last.

Until you’ve unlocked a raft of new tracks, Gravity Chase can get really repetitive. Tracks can be played on 3 different modes – Arcade, Combat and Eliminator – and while they all have different aspects too them, they all feel too similar. The arcade mode is all about speed as you race to finish first, using boost pickups and speed pads to go as fast as possible. In the Combat races, the boosts and speed pads are joined by ammo and shield pick ups. The former enables the one weapon in the game, the same weapon that’s attached to every ship in the game, while the shield protects you for a few seconds from that weapon. The gun like weapon tracks opponents ahead of you and if you manage to blow them up, they respawn a few seconds later entirely stationary. The Eliminator races are similar to the arcade races, but true to the name, the racer in the last position is eliminated every 30 seconds. As you can imagine, the aim here is to make your way up the field to avoid getting eliminate. The differences in these modes might seem vast but in practice they all feel like variations of “go fast”.

That’s compounded by the fact that the tracks in Gravity Chase don’t have any character, flair or memorable features to them. For the most part, you’ll be whizzing through neon lit tubes without any real indication of where you are on a track. There’s an environment around you but because you’re racing in 360 degrees, it’s hard to read any distinguishing landmarks. There’s no map of the track on the game’s HUD either, so you’re often just racing from corner from corner, taking each one as they come because it’s not possible to put together a longer term strategy. Racing in this game often feels more like luck than skill because of this.

Wiping Out The Gravity Chase

Gravity Chase knows its audience and the lineage of games it follows and as such, has a suitably pumping soundtrack. You won’t find The Future Sound Of London or The Prodigy here but there’s a whole host of hard house styled tracks here to set the sci-fi racing vibe. It’s a shame that the decent set of tracks simply play out and haven’t been customised to the game – if you manage to last long enough in an elimination race, you’ll hear the song finish followed by a few seconds of silence before it restarts. It’s fine, but it would have been nice to see sound tracks tailored to race tracks.

There’s an odd bug in Gravity Chase involving elimination races too. As previously stated, in this mode the racer in the rear most position gets eliminated every 30 seconds until only one racer remains. Or, at least that’s how it’s supposed to work. On two occasions, I managed to win an elimination race only to be ranked last when it came to points. It’s an odd glitch that had only occurred twice, but bears mentioning.

Then there’s the overly sticky slow pads. Littered around each track are red floor tiles, much like the boost pads, but these slow you down. The idea is that they reduce you down to a canter when you go over them and most of them are placed shortly after a speed pad to get you revolving around the track away from them. 95% of the time, they work as intended. They slow you down when you hit them. The remaining 5% though? Well, they bring you to a dead stop. It’s like they have some extra clipping onto the track and they just instantly anchor you to the floor until you steer around them.

Even with its issues though, Gravity Chase has enough content and verve about it to keep fans of Ballistics, WipEout or Radial-G entertained for a few evenings. For a budget title, it’s an admirable attempt to capture the spirit of the zero-g racing greats that came before it. In the long run though, it just can’t keep pace with the luminaries of the genre.

Gravity Chase is launching on to PC via Steam (review platform) and Xbox platforms on January 20th, 2022.