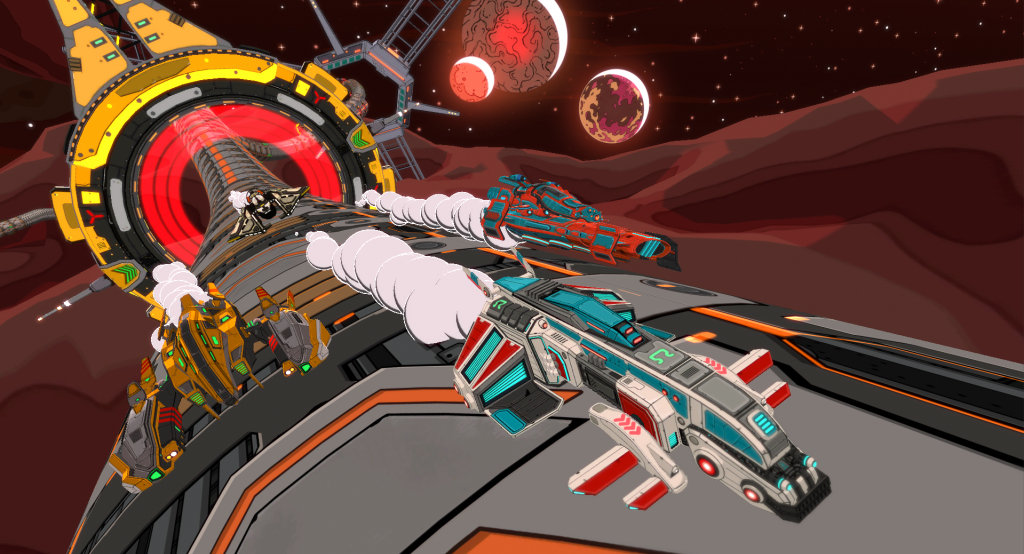 PSVR had a pretty rough year, let’s be honest. Aside from the glorious horror fest of Resident Evil 7, it’s fair to say there’s been little to get excited about, with only a few parties and ‘showings-off’ seeing the headset being pulled out to get any real use. It’s becoming a worrying trend and one that it certainly a concern when it comes to where we see the future of the headset going. Whilst there are some solid and worthy experiences, I think it’s fair enough to question if we’re yet to see PlayStation VR really be worth the stonking price it’s being retailed for. There was only really one game I was excited for over all the others announced after playing it nearly two years ago at a gaming exhibition.

Back then, PlayStation VR was still known as the mysterious ‘Morpheus’ and after playing Radial-G (on an Oculus Rift, no less), I declared it my game of the show and asked the developers outright if it was going to make its way to Morpheus once released. Blissfully, the answer was ‘yes’.

Two years later, we’ve finally got our hands on what could be one of the best reasons to invest in the headset. It’s not required, but in VR Radial-G is fast, frantic and ferocious.

“Total immersion”. That’s what playing Radial-G on PSVR feels like. I’d played the game extensively without the VR headset at first as I’m still wearing in my “VR legs” but sliding on the headset brought a whole new perspective to it. Literally. Obviously.

The biggest improvement to the game in VR is the ability to look around the cockpit of your ship while racing. When playing in non-VR, you can use the right thumbstick to look around you but while racing, this feels awkward, as if you need a second thumb on your right hand. Using the PSVR, that right thumbstick movement is mapped to the headset movement so it feels entirely natural. Barreling around the cylindrical track, glancing left and right really puts you in that hotseat. It’s incredibly impressive VR, immersing you in the bold visuals and breakneck speeds.

As I mentioned before, I’m relatively new to spending any extensive time in VR and I’m still getting used to the occasional bout of dizziness that some games can cause. I can report that during my time with Radial-G in VR, I didn’t experience a single moment of disorientation, even though I was spiralling around the track at incredible speeds. I imagine it’s because the cockpit of the ship is always a locked point of focus which counteracts the blistering pace you can get up to on the track. Radial-G is a very comfortable VR game to play.

One odd consequence of playing the game on PSVR is that it feels more difficult. When playing on a TV, I normally opt for a third person view point outside of the ship. This gives a wide and high view of the track ahead. When playing in VR, I opted for the immersive first person view because it felt most comfortable, which is lower to the track and has the cockpit details around your viewpoint. This meant I didn’t have as clear a view of what was coming up ahead of me that when I was playing in Non-VR. This was a temporary frustration because, as I re-learnt the tracks in VR, the difficulty started to level out again. I still felt mildly disadvantaged over my non-VR playing self but the added challenge was well worth the trade off for the enthralling view in VR.

All in all, Radial-G: Racing Revolved is the WipEout-esque VR game that Sony seems hesitant to give us. It’s comfortable, impressive and engrossing. Glancing to the right as you buzz past one racer to hit a boost pad and then flip around the track to overtake another seconds before the finish line is as adrenaline inducing an experience as any I’ve had in VR.

If you thought WipEout was fun but didn’t offer the 360 degree track revolving adrenaline pumping techno blasting experience you were hoping for, Radial-G: Racing Revolved can fill that void. It’s obvious the game will draw comparisons to a staple of the PlayStation heritage, but it’s fair to say the differences in the two are substantial enough that both can live on the same console and be enjoyed by fans of the racing genre. Strangely, there aren’t really many games like it. Radial’s unique selling point (other than the cracking VR) is that you can tear it around 360 degress on the games tube-like tracks, this presents a varied and interesting way to outmaneuver your opponents, who at least at first are going to be harder, better, faster and stronger than you. As they tear it across the top of the tube you may be able to find a boost pad down below that they haven’t seen, allowing you to get a little jolt of speed in order to keep up your momentum.

Importantly with this kind of movement in racing games, it all feels quite natural. Unless you’re racing across a non-tubular(?) surface, you never have to worry about tearing it off the road and crashing into a million pieces, something I’m rather thankful for because my racing simulator skills aren’t strong. Mario Kart, Radial, F-Zero, I’ll crush you, but race me on Gran Turismo and you’ll leave me in your dust (I’m pretty damn good at Cuphead though, before you start).

Your ships feel weighty and are easy to control across surfaces, and though the visuals are solid it’s a shame there isn’t a bit more variety in the design of the tracks and the ships. I’ve always appreciated Radial-G because I’ve rarely played anything else like it and though there are next to no visual issues that I noticed, a tad more varitation in the overall look of the tracks perhaps wouldn’t have gone amiss. Still, it’s not like you have much time to look around as you’re pelting it up and down a tube with opponents who want nothing more than to grind you into the ground.

There’s a very clever addition with the opponents you face, particularly given that you can’t always see where they are at a given moment. As they hurl it around the tubes a line will circle around the tube, indicating where on the track they are, so if they’re beneath you you’ll know exactly how close or far away you are from them, which is a nice addition and certainly beneficial as the game progresses.

The blue and green lines ahead are your opponents, the lines indicate where on the track they are and if they’re below or above you. Nice touch .

You’ve also got a full campaign to be getting on with which will unlock tracks and new ships for you to pilot, and an online multiplayer which I haven’t yet been able to test out fully (devs if you’re reading this, if you wanna get crushed at your own game then gimme a shout. I played Kick-Off with Dino Dini and crushed him 4-0, just FYI #BeatTheDev2017), so in that regard, there’s plenty to be getting on with and becoming the master of these tracks is going to take a good while. There’s a pretty steep difficulty curve here which is going to test even the most experienced of speed racers.

Radial-G Racing Revolved is a cracking good time, with a pumping soundtrack and some fiendish courses, and is one of the few games to offer both full VR and non-VR experiences that is actually better in virtual reality. With that said, it does suffer from limited variety and the tracks will begin to feel quite similar, as it’s tough to really differentiate a large amount of them from the other, though when you’re going this fast and having a ball doing it it’s hardly a dealbreaker. When you’re thrown from a tube track to sequences without barriers and back again in the blink of an eye it’s the last thing you’re going to worry about.

Radial-G: Racing Revolved provides the kind of VR experience you were hoping for when you bought your PSVR. Strap in and hold on tight.

Radial-G: Racing Revolved is available now on Steam. It will be available on PlayStation 4 (reviewed) on September 12th.

Disclaimer: In order to complete this review, we were provided with review codes from the publisher. For our full review policy, please go here.