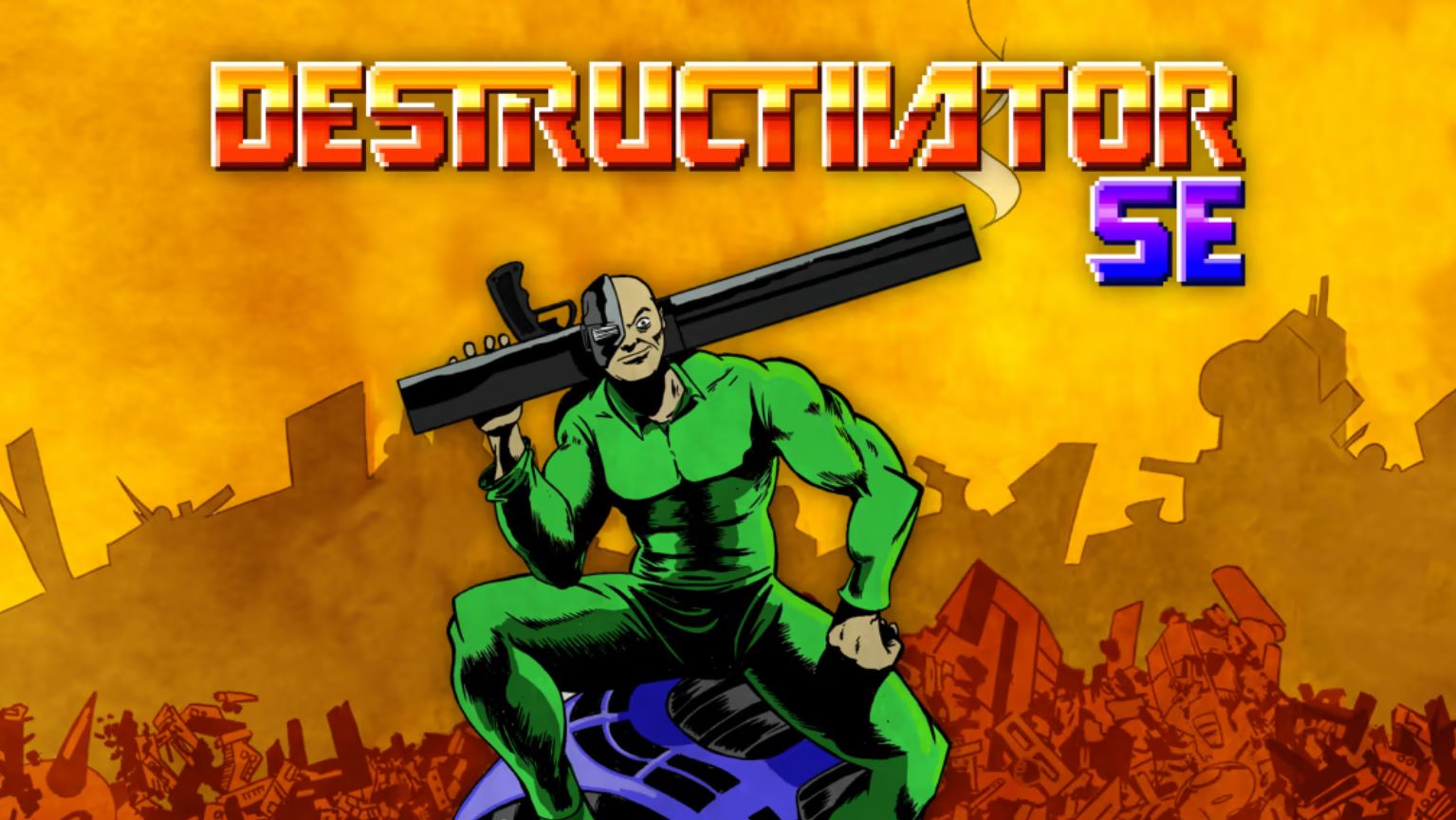 Earth is shot to pieces. The alien menace Zallagor that descended in the original Destructivator (a game which was quite popular in 2008) has been defeated, but at great cost. The humans want revenge. This is where Destructivator SE (a sparkly Switch version of the PC version of Destructivator 2) begins. The little, manic, green spandex wearing titular character is ready to go on the offensive. He’s heading to the alien home planet of Zerkl to kick ass and ensure they never threaten Earth again.

Delivered by a few paragraphs of text at the start of the game, that’s pretty much all the story you’re going to get out of Destructivator SE. Inspired by the run and gun games of the 80’s and early 90’s, this game calls back to an era when the game play spoke for itself and the only motivator was “there’s bad guys about. Go kick their ass”.

The aim of each of the 54 levels in Destructivator SE is to destroy all of the aliens in the level. Once the level is cleansed of aliens (or a boss), you’ll get to move onto the next. Armed with his big gun (I’m not sure if it has an official name but I’ve been calling it Big Gun™), the human warrior drops into the level and tries to shoot his way through everything until it’s all gone.

Doing so is much easier said than done however. The Destructivator has 3 respawns, each of which come with a full health bar, available on each level. Once those lives are exhausted, you’ll have to start the level from scratch. To assist in progress, there are checkpoints in each level which will change the location you respawn in should you die. There are also health pick-ups to refill your health bar if you’ve taken damage.

You’ll need every helping hand you can get to progress through Destructivator SE. The game is old school tough, harking back to the challenges of the 80’s run and gunners, like Thexder or Commando. Aliens can either take a beating before they fall or they come at you in numbers. Sometimes both. As the game progresses, the variety of foe grows with every few levels. This constantly keeps the player guessing as they’re coming face to face with a new enemy type that might have new tricks up their sleeves (or whatever an alien equivalent to a sleeve is).

To beat the tougher levels of Destructivator SE, you’ve got to use the environment. When waves of aliens attack all at once, the screen can look more akin to a bullet hell game than a run and gun title. Using walls to put some distance between you and them becomes a necessity. Ladders become an essential tool to returning fire too. The titular warrior can fire in all the cardinal and ordinal direction but not in a 360 degree range. By using ladders, you can get a better angle to return fire on enemies.

There’s a real crunch to that gunfire in Destructivator SE too. There’s a real satisfying punch to the way it feels to fire the Big Gun™. Because of the health bars above the enemy’s heads, and the way they flash when they’re hit by the Big Gun™, you can see the impact that fire is having.

Destructivator SE is separated into 6 themed zones, each with their own thematic feel and unique hazards. It’s quite impressive how the game design changes through this game. There’s some design staples that remain throughout the game but there’s a real variety to the levels. Some levels feature just a single enemy type that are used in creative ways. Other levels have you commandeer alien vessels to take an shoot-’em-up type level.

Waiting at the end of each of this game’s 6 chapters is a boss. This is where the challenge in the game really steps up. Each boss has their own unique attack patterns to learn and adapt too. Thankfully, you have 3 lives in each of the boss fights too, so at least you have some leeway to fail as you learn. The boss battles are some of the most challenging moments in the game and will really push your run and gun skills.

The most challenging moments of Destructivator SE are the few difficulty spikes that are littered through the game. I like a stiff test as much as the next gamer who grew up in the 80’s but there’s a few levels in this game that really pushed my skill and my patience. Sometimes it’s because the checkpoints are a little too far apart with a lot of hazards between them. In other levels, it can be tricky to keep track of where the titular character is because they’re so small and the screen so busy. There are a few levels that just seem all together too much of a step up from the previous level. Because progress is blocked until you’ve finished a level, these instances become a pain in the ass until you best them. Even when you do, they’re more of a relief than gratifying test the rest of the game.

Dropping the beat while dropping aliens

The soundtrack to Destructivator SE was the main thing that kept me going through Destructivator SE’s few frustrating sections. It’s an absolute banger. The synth tracks with methodical beats match the human vs alien invasion very well indeed. There’s a few real ear worms in here should you slip on a pair of headphones and really take them in.

Thalamus Digital, a name that might be synonymous with games from the 1980’s and 90’s for some people, has made a new name for themselves over the past few years by helping retro inspired games reach new audiences on new platforms. Bezier, Death Ray Manta, and now Destructivator SE. The latter here doesn’t do anything revolutionary for the run and gun genre. Instead, it’s a a challenging – if sometimes too challenging – take on the retro classics. If you have fond memories of Duke Nukem (pre-3D), Rapid Reload, Alien Hominid or even the original Destructivator, there’s 10+ hours of content here that you’ll likely enjoy.

A retro inspired run and gunner that’s as tough as an old boot, Destructivator SE harks back to a time when games had just a single weapon and we were happy about it. There’s a few random difficulty spikes and you won’t see anything new for the genre here, but it’s still a rewarding experience worthy of your time.